Picking up from Part I we woke up on the Friday morning after enjoying the last ‘proper’ nights sleep we would get all weekend. However we woke up to the Nurburgring weather we had been told to expect! 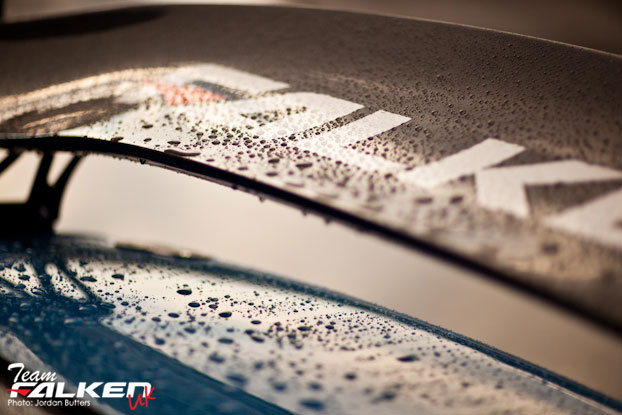 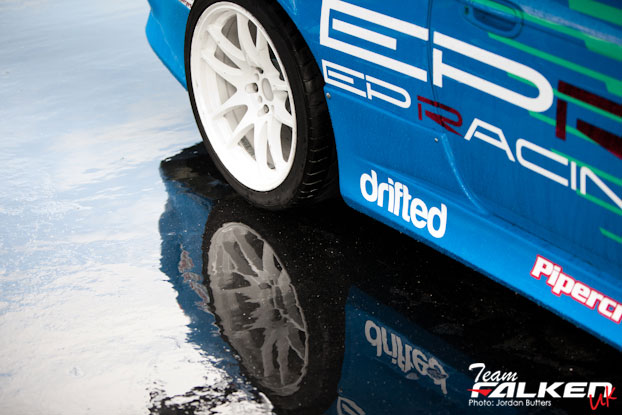 We were due to be out on the legendary main GP circuit later that evening in front of a packed grandstand of thousands of German race fans so rain was not the ideal ingredient! 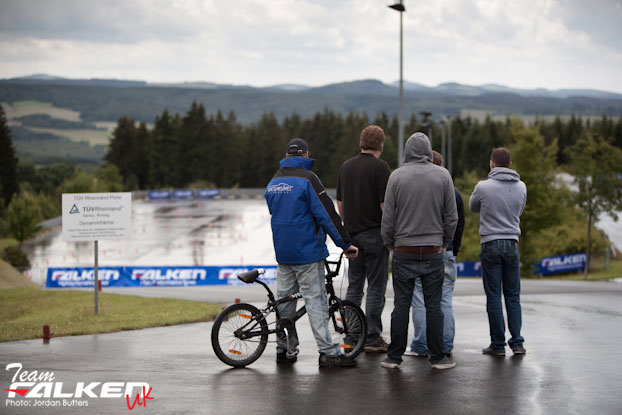 Remmo Niezen and the European Falken team took the time to survey the area we would be using for the passenger ride demos on Sunday. Unfortunately at this point over the weekend it resembled more of a lake amongst the German countryside.

Alan hopped into his S14 and made the most of the tyre-friendly conditions and gave the circuit a test. 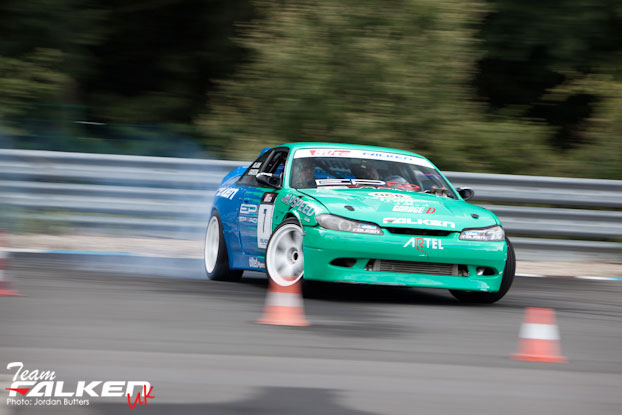 Before long the sun was out and drying the circuit at an amazing rate! The tarmac at the handling circuit has some special voodoo mixed in to drain the water away and before long we started to see smoke!

The G35 was sitting spotless in the paddock and wearing a fresh set of Falken FK452 ready for the main demo. What would the German fans make of the Nissan?

We took the early afternoon to walk around the drift paddock. Several German drifters were at the track to demo alongside us and there was a certain fondness for the models of a Bavarian nature!

There was even an insane 5-Series with a half-ute type conversion and a single race seat in the back! I wonder what a passenger drift ride feels like from back there?! Pretty mad I’d say!

We also have a lot of love for Remmo’s Cheverolet Silverado. This thing is HUGE! For scale check out the guy at the rear door, he is regular sized! 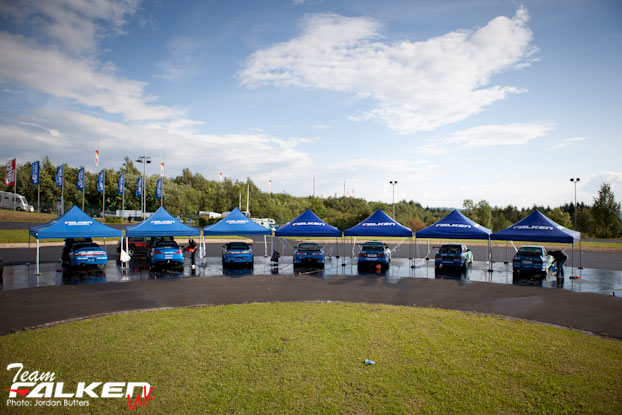 Come late afternoon the skies were blue and it was time to head out to the main circuit for the demo. Game time! 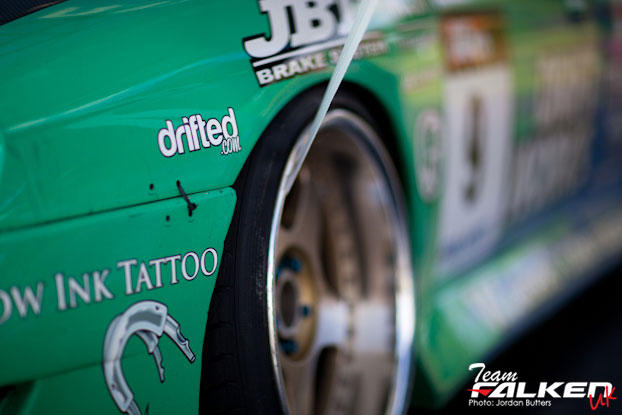 Last minute prep included running around and tagging the cars with Drifted stickers! 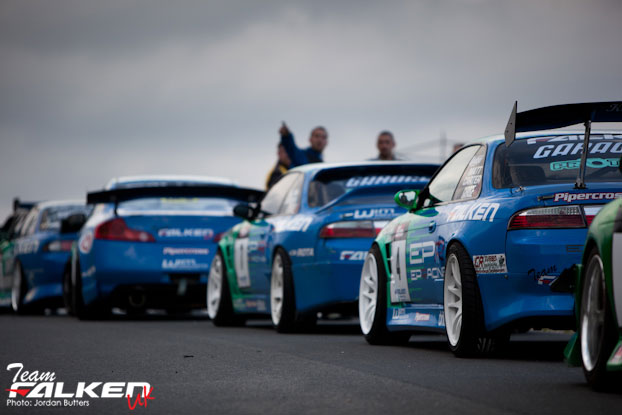 The queue up to the circuit was looking pretty impressive, from the E30’s to Wander’s WIDE S14, Matt and Alan’s S14.5’s to Polo’s G35. All Falken colours! 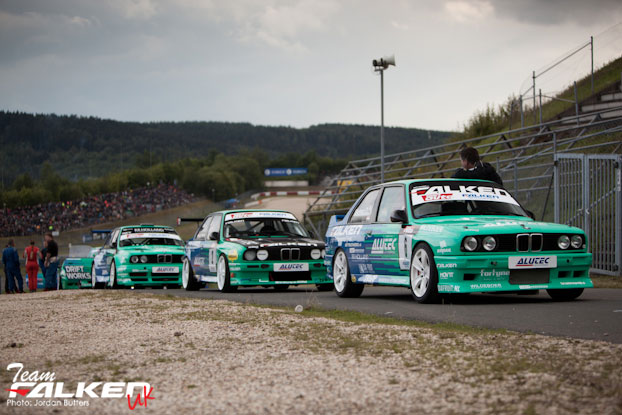 Looking back towards the hairpin from the bridge over the Schumacher S (bends 8 and 9m former Audi S) the grandstands were packed out! From the photo above they ran back up the track to the left of frame and then around the bottom of the hairpin and back up the other side! People eager to see the drifting, cheering and setting fireworks off into the sky!

Remmo and Michel are regulars at the ‘Ring and went straight out with a crazy fast initiation past the crowd just feet apart! 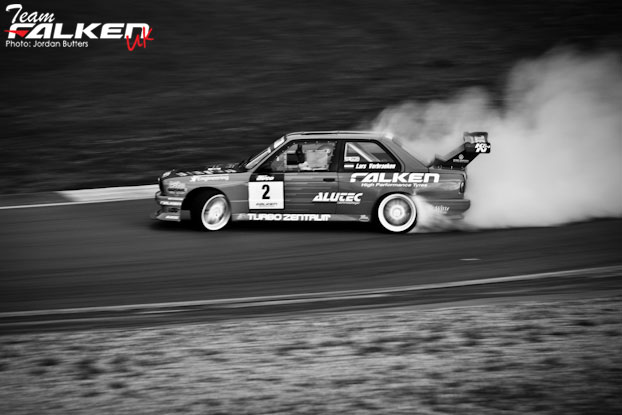 Lars followed suit in his immaculately prepared 1JZ-powered E30. The car has a rear-mounted radiator setup and the 1JZ engine is pushed right back through the bulkhead for ultimate weight distribution. 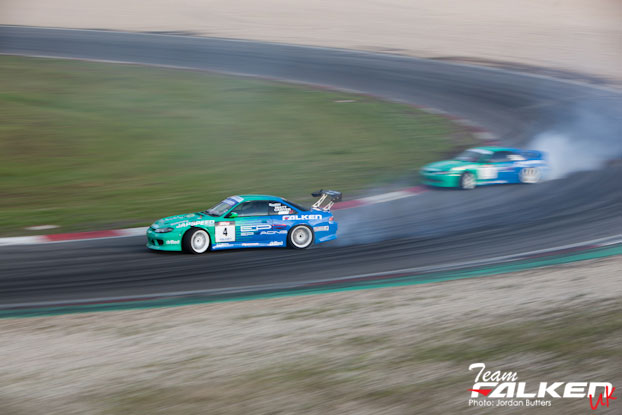 Matt and Alan were next up. The crowd knew what they wanted to see, rewarding the drivers with loud cheers when drivers entered with sufficient speed and angle! 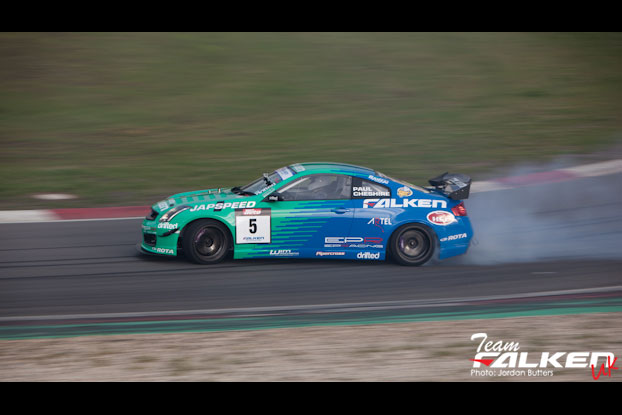 As a driver the buzz you get from drifting such a world famous circuit in-front of such a huge crowd cannot be summed up in words! 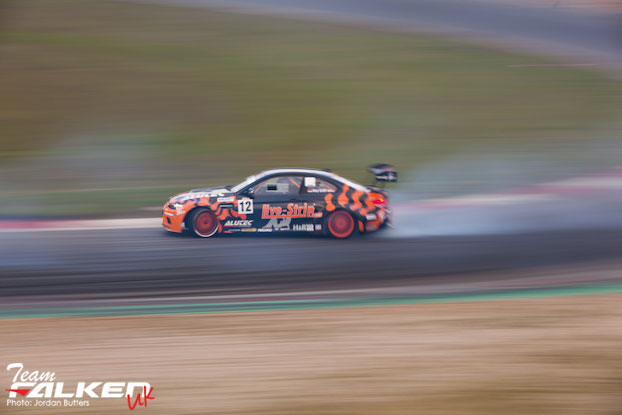 The German drivers out there with us were putting on a great show too! The Live Strip E92 was out and looking fast, it was great to see a newer chassis like this being used in drifting. 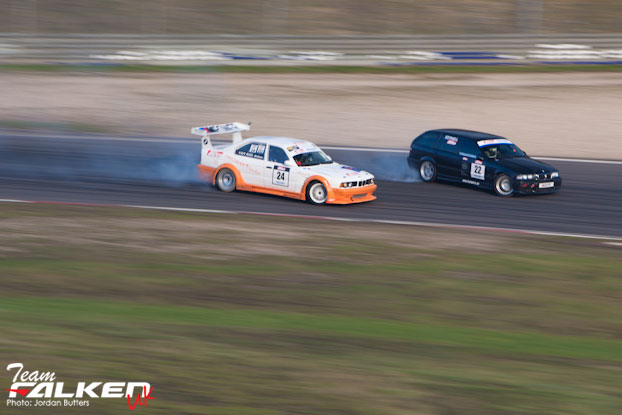 The E36 Wagon and DTM-style E34 with the world biggest wing were getting nice and close on the hairpin. 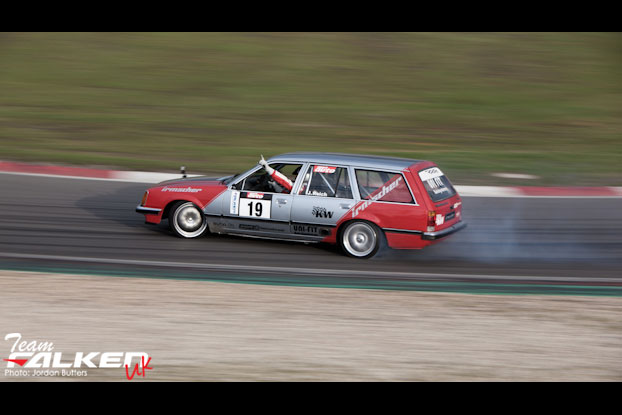 This V8 Opel Commodore was a huge hit with the audience and the noise it made was unreal! So loud. 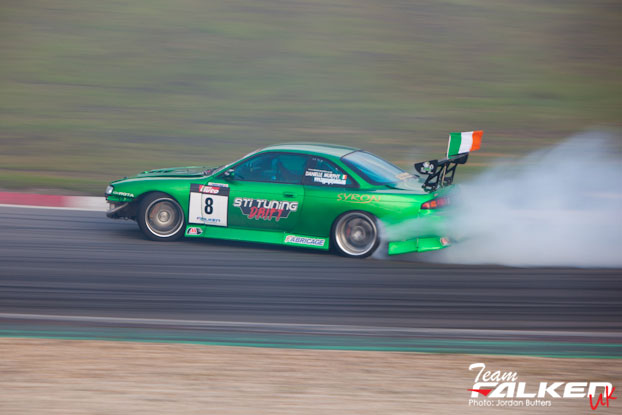 British Drift Championship and Irish driver Danni Murphy made the journey out with us and put in some laps before unfortunately bending a coilover on the unforgiving kerb and ending her weekend’s driving. 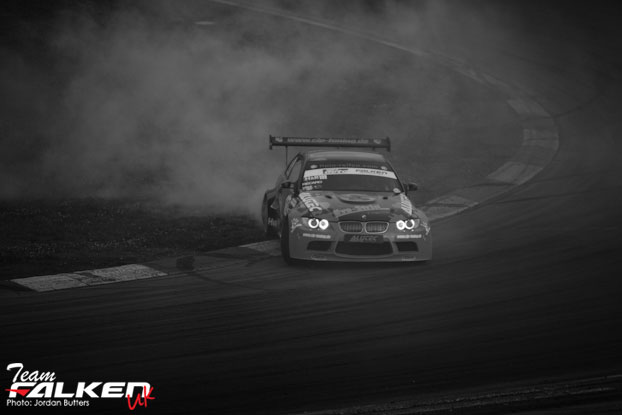 The track claimed a few spills, the Live Strip E92 clambering back onto track after a mishap. Rumour has it Polo even tickled the gravel at one point, the pictures strangely went missing from this?

Before long the German drivers were ganging up on us and throwing in some sweet three and four car drift trains! 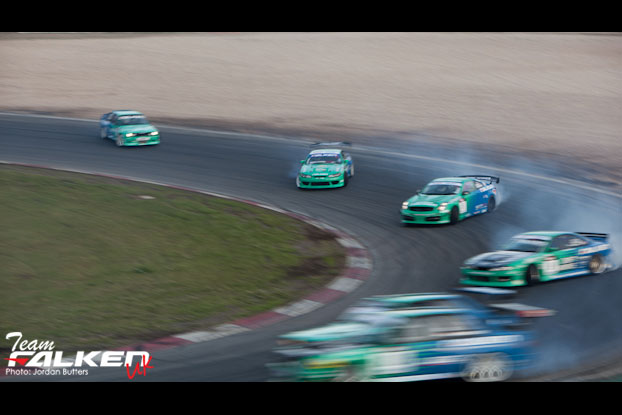 So we answered back the best way we know how and entertained with a 6 car Falken train!

The crowd loved it and the noise was intense!

As we came off track people were everywhere, clambering to get a better view and to get close to the action!

The adrenaline was pumping as we drove through the crowd, drifting at the Nürburgring was a success! 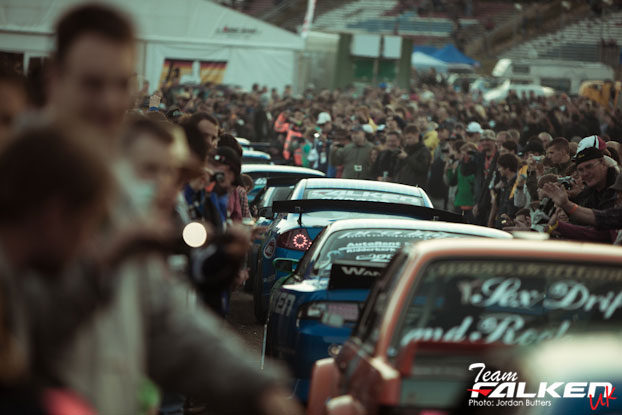 We hit high 5’s with the fans as we drove through, before grinding to a halt and being swamped for photos and autographs. 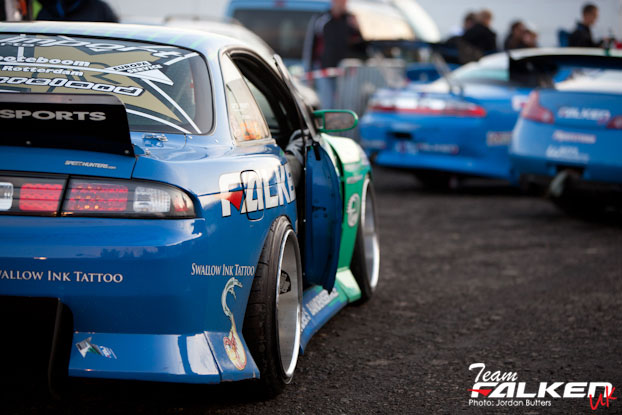 After 30 minutes of meeting fans and talking about drifting and the cars it was time to make our way out of the circuit and back to camp! 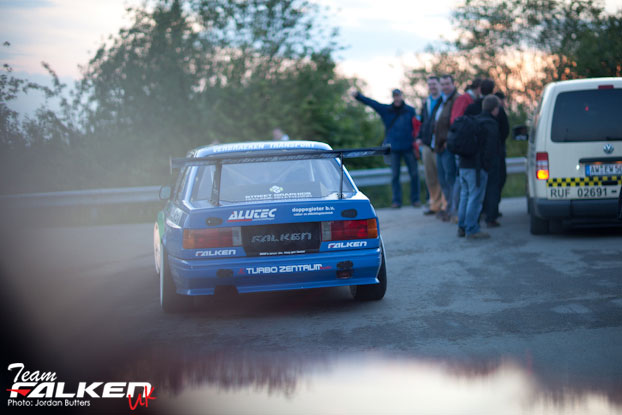 Time to unwind and prepare for a busy weekend of passenger rides on the handling circuit. And ready for watching Saturday’s N24 race and supporting the Falken Porsche 911 GT3R team naturally!

Check back soon for the third and final part….