Fresh back from our Nürburgring demo at the N24 in front of thousands of die hard race fans, we were in high spirits and ready for the third round of the 2011 British Drift Championship. Due to hard use at the ‘Ring event all three cars needed some maintenance and repairs to be made prior to the event.

Polo’s G35 had developed a front pulley problem which was affecting the power steering when under load, during the Germany demos the front pulley had failed meaning fast repairs were needed upon arrival back in the UK. With repairs completed Polo went out for his practice laps on the Saturday morning at Teesside and experienced the same serious power steering issues, indicating a change of approach to the ongoing issue was required.

Unfortunately this change could not be made at the trackside and so the G35 was reluctantly retired from the event. Luck was really not on Paul’s side as he went out to qualify in a borrowed car which also suffered issues on the runs that counted, ending his event.

The turbo on Alan’s S14 had suffered from overheating due to the higher octane fuel in Germany and as a result the area surrounding the turbo was seriously heat damaged. All the vital components that were damaged were replaced upon return to the UK, however during practice the car developed a misfire making the course near impossible to navigate. Alan did his best to resolve the issue before qualifying, however the problem occurred again at just the wrong moment during his run, causing a critical error and also ending his event.

Matt’s 1JZ S14 saw the most track time of the three at the Nürburgring and as a result of ongoing hard use throughout the season the differential decided enough was enough and shattered during the final day’s passenger runs. With a new diff installed for Teesside Matt was attacking the course hard in practice and was already attracting positive predictions for a win at Round 3. Prior to the event he sat just 5 points behind championship leader Mark Luney so a finishing position above Mark would see him take the lead in the championship.

Two strong qualifying runs saw Matt qualify in 5th position in the top flight Super Pro Class. This put him up against promoted-Pro-driver Grant Laker in the first of the Top 16 battles. Title competitor Mark Luney qualified in 9th position and was drawn against the ever aggressive driving style of Simon Perry. The Team Falken fans were elated as Matt progressed to the Top 8 and Mark was eliminated in his Top 16 battle! This meant Matt’s lead in the series was almost guaranteed at this point.

A tough second draw for Matt faced him off against Team Japspeed’s Shane O’Sullivan who currently competes in Ireland’s Prodrift Series. Contact between Shane and Matt on the second run saw Matt drifting mid corner whilst beckoning Shane on to get closer out of the driver’s window – amazing driving! Matt was awarded the win and progressed into the Final 4! 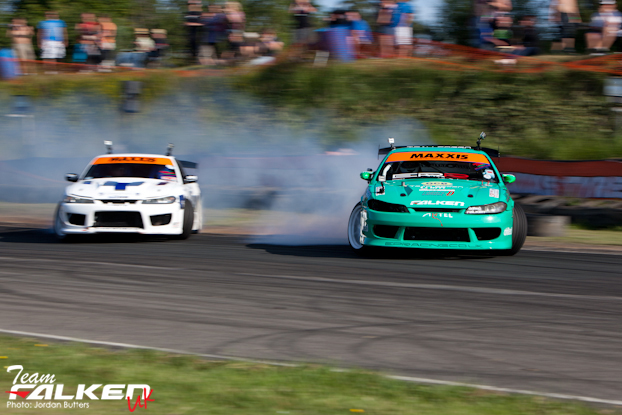 Matt was next drawn against Scottish driver David Waterworth and after two close runs had booked his place in the final yet again. Three events and three finals this season!

His competitor in the Final was talented young driver Steve Moore. Matt and Steve went head to head and both displayed two outstanding runs when leading and chasing respectively. The judges could not separate the two and so they were instructed to run One More Time! Matt held the advantage going into the final run however as he crossed the line the judges ruled that two of his wheels left the track and as such the run was scored a zero. Steve Moore took the win, but at least Matt secures his third second place podium of the season! 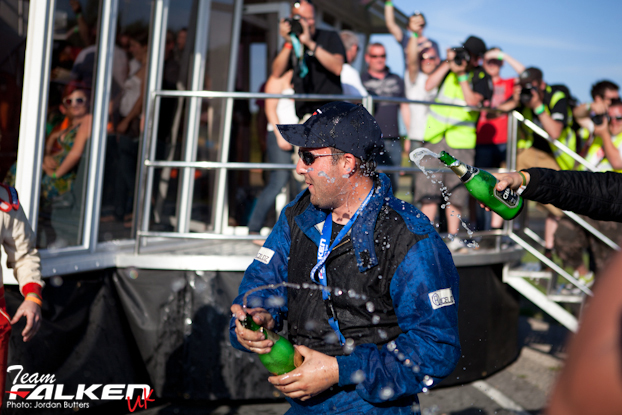 Going into Round 4 Matt leads the Super Pro class by 11 points, Alan sits in 14th place in Super Pro and Polo shares 17th position in Pro class with 7 other competitors. In the team/constructors standings we lead by 32 points! 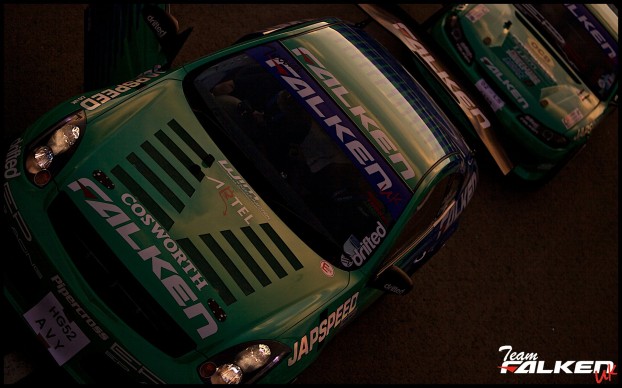 The weekend following Round 3 we headed back out to mainland Europe again, this time Lousada, Portugal for the Lousada Tuning Show.

We’ve been out to Lousada a few times over the past few years and always can’t wait to get back!

At which other track does the whole town come out to watch the demos and go crazy for drifting in such a big way? The fans showed a lot of love for Falken!

Oh and the local Police let us get away with a drift procession through the streets, burnouts and drifting roundabouts along the way! Words can not describe how much fun Lousada is for us! 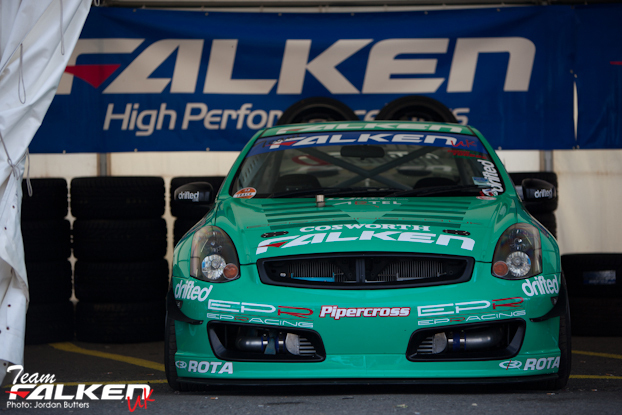 After a rare weekend off from drifting we headed over the Mallory Park in Leicestershire for Awesomefest 2011. A long weekend of extreme drifting, extreme sports, partying and a nice chilled out vibe.

The open pit lane setup of the weekend allowed us to head out for drift sessions as and when we fancied.

And allowed us to give something back to our fans and supporters in the form of passenger rides!

The Falken pit was packed all weekend with people grabbing photos, goodie bags, shirts and chatting with the drivers. 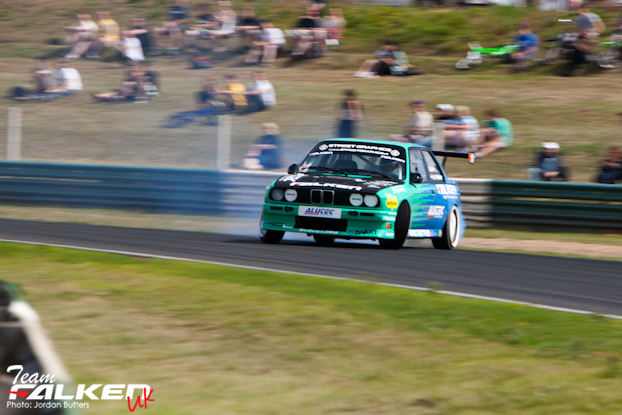 Falken Europe drivers Remmo Niezen, Lars Verbraeken and Lennard Wander had also made the journey over for the event, giving us a 6-car strong Falken presence! 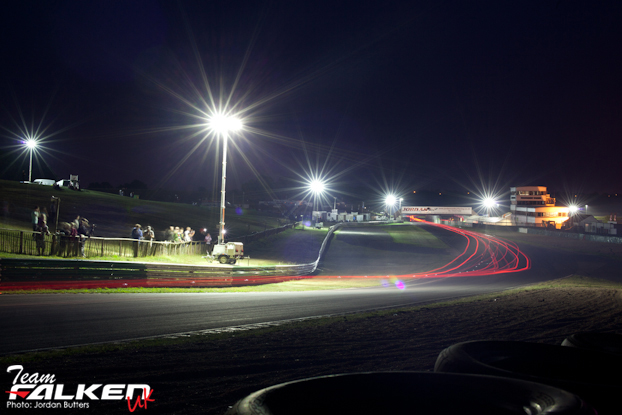 On the Saturday night we took part in the crazy night demo, which was interesting because Matt and Lars’ headlamps don’t……..err…..work/exist.

What use are headlamps when they don’t point the direction the car is going anyway?! 🙂

The crowd got hyped for the night demo and the madness of it all gave Awesomefest a ‘Gatebil’-esq feel.

The weekend wasn’t without it’s dramas though! Alan’s diff decided it wanted to be like Matt’s in Germany and exploded itself quite spectacularly. Polo’s crank seal decided it didn’t want to hold the oil inside his engine anymore also. Thankfully no damage was done, but the G35 was out of action until a new seal could be sourced and fitted.

He was back out enjoying the awesomeness of Mallory Park on the Sunday though, gaining some valuable seat time in the car without the pressure of competition.

Before Awesomefest we also purchased a new race transporter! It currently holds 6 cars, however modifications are being made to take the capacity down to 4 cars and to give us room for tools and sleeping/chilling quarters. How awesome is this going to look painted up in the Falken colours with the cars parked in front?!

So save for a rather exciting ‘secret’ appearance this week which I’m sure we’ll tell you about in due time we now have a few weeks to prepare for the next round of the British Drift Championship at Knockhill in Scotland on 20th & 21st August. Matt is looking to extend his lead at the top of the championship and bring home his first 1st place podium, Alan is looking to occupy another step on the podium and climb his way into the Top 10 of Super Pro and Paul is looking to get some valuable experience in the car and show the world that the G35 is going to be a force to be reckoned with in 2012. See you in Scotland!