DRIVER BLOG: Gearing Up for The Green Hell 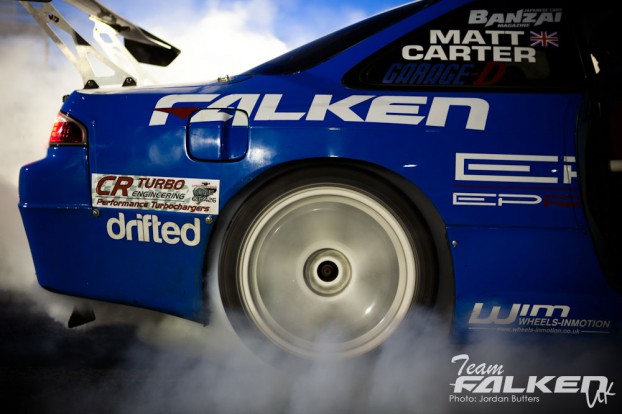 A few weeks has passed since we were last out in action at the British Drift Championship Round 2 at Norfolk Arena and we’re busy making preparations for our coming road trip to the world famous Nurburgring Circuit in Germany, AKA ‘The Green Hell‘. 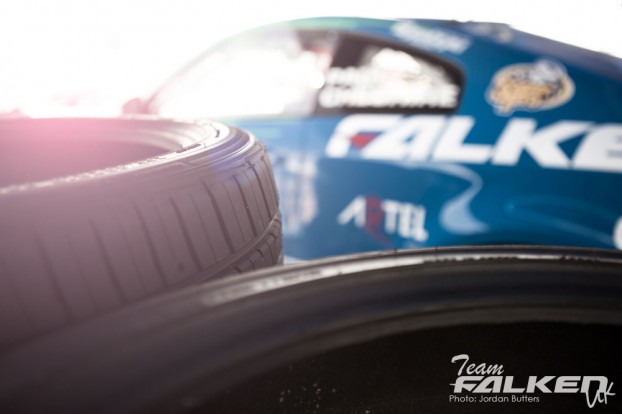 BDC Round 2 saw some amazing results for the team it has to be said. Dutch Falken driver Remmo Niezen made the journey to King Lynn to join us in his V8 E30 BMW and the Falken paddock was a hive of activity all day (and night!) long. 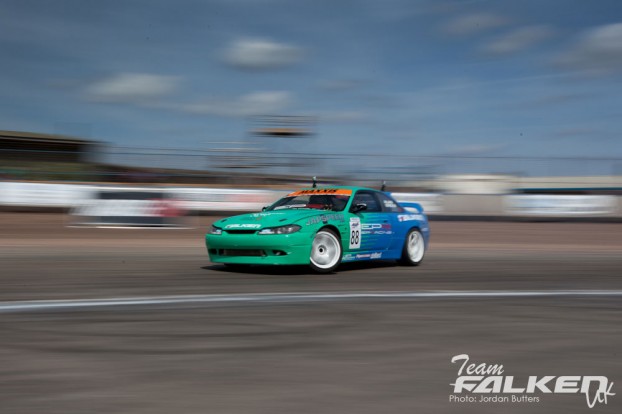 Back out on the track Alan was eligible to qualify for both the Pro and Super Pro classes respectively. Successful qualification into the Super Pro class would promote Alan into the top tier alongside Matt for the remainder of the season. Alan went out into qualifying with a positive optimism, having had previous podium success at Norfolk Arena into 2009 and 2010. 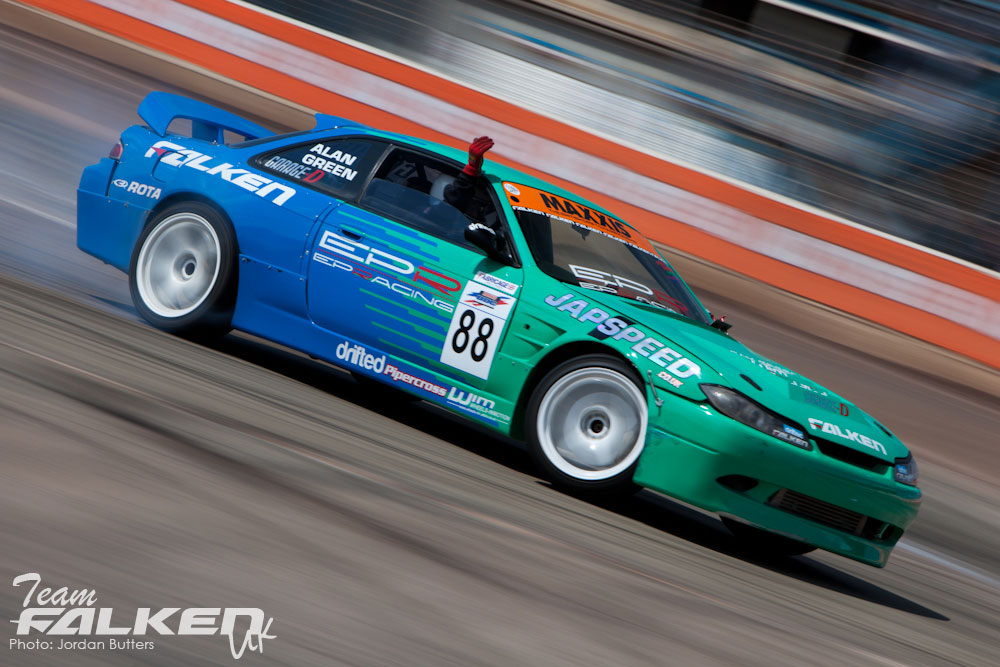 After a shaky start Alan managed to qualify for the Top 16 in the Pro class in 32nd place, narrowly avoiding an early bath. It seemed that he was saving his good runs up for Super Pro qualifying, in which he managed to qualify in 9th place! Securing the remainder of the season in the top flight! Alan faced Steve Evans’ Mighty Toyota Starlet in the first of the Super Pro Top 16 battles, but was narrowly outed, nonetheless progression into the Top 16 again and his high qualification position puts Alan into 11th place in the Super Pro Championship Standings going into Round 3. 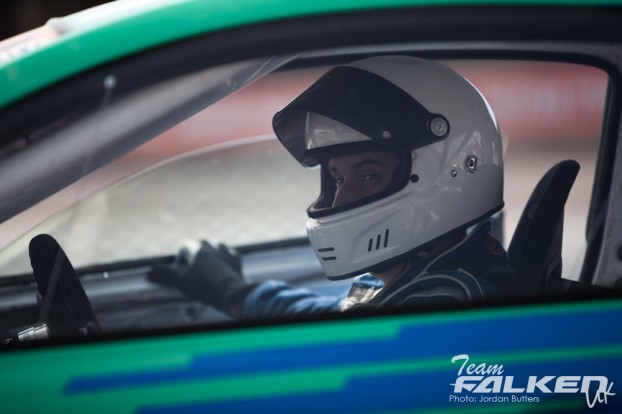 Polo’s Nissan G35 was proving a popular attraction in the paddock. This is the first time a G35 has been used in UK drifting, add to this Paul’s incredible eye for detail and you have a truly unique machine. 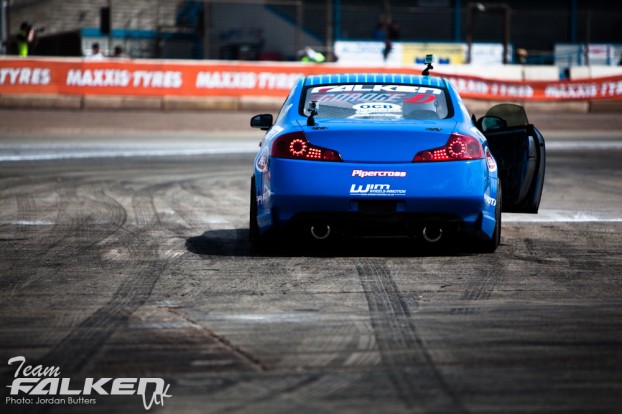 Polo, still getting to grips with the new chassis, and running a new triple-plate clutch setup following the mechanical issues at Round 1 went out for qualification and landed himself 18th spot on the grid. This put him up against Michael Marshall in the MnM Motorsport S15.

After matching Marshall in the first run, Paul was narrowly edged out by just one point. Unfortunately as the run was coming to an end the G35 suffered a gearbox failure, ending Paul’s weekend. 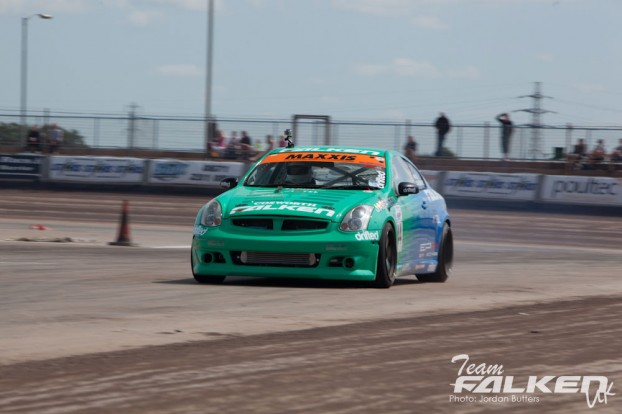 Nonetheless as with any new chassis these problems are only discovered by testing and driving the car, so all seat time and experience is invaluable. 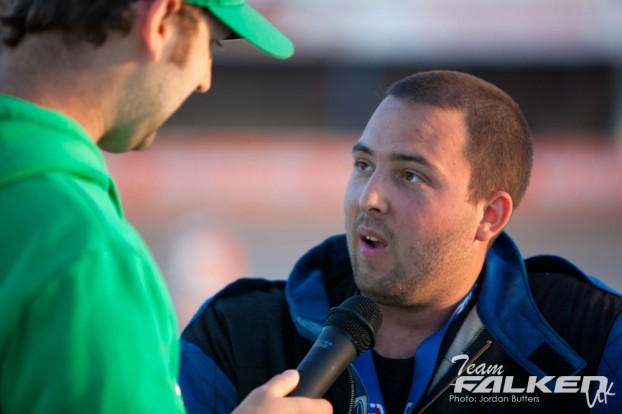 Matt Carter entered into the Super Pro Arena at Round 2 with everything to play for. A strong 86 point qualification run saw him in 6th place in the standings and up against long-time fellow competitor and one of the BDC’s few female drivers Julie Robinson.

Two strong runs from Matt resulted in two 7-3 calls from the judges and progression into the Top 8 where he would face Team Japspeed and Irish Prodrift driver Shane O’Sullivan. Matt progressed past Shane to meet up with Round 1 winner Mark Luney in the 800bhp Cosworth SATS Supra. In the second of their battles so far in this 2011 season Matt managed to edge Mark out and book his place in the final. We’re sure this won’t be the last time these two go head to head this year! 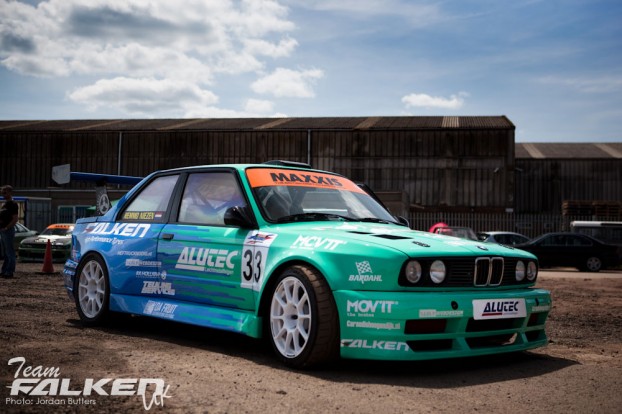 Matt would meet fellow Falken team-mate Remmo in the final. Remmo had qualified in 4th place after a crowd-pleasing qualifying lap driving one handed with his other arm aloft out of the driver’s window! Remmo blazed past Danny O’Brien in the Top 16 and former BDC champion Stephen Biagioni in the Top 8 to meet strong opponent driver Simon Perry in the Semi Finals.

Despite some fighting-talk on the start line from Simon, Remmo’s blistering pace won him both battles 7-3 and placed him in the final.

As the floodlights shone down on the Arena and the sun disappeared over the horizon the packed grandstand eagerly awaited the all-Falken final. Straight out of the gate Remmo led the way, pulling a slight gap on Matt and taking the first run 6-4.

Matt fought back valiantly but could not do enough and drew the second run 5-5, handing Remmo the win at the British Drift Championship Round 2! 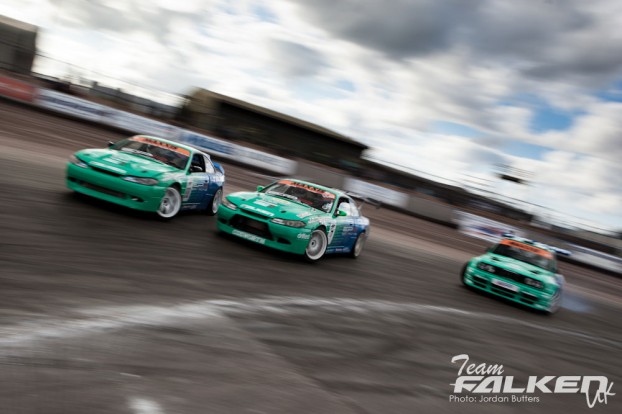 To top off a fantastic weekend the following day Matt, Alan and Remmo went all out and took the BDC’s Annual Team Battle crown much to the crowd’s pleasure! 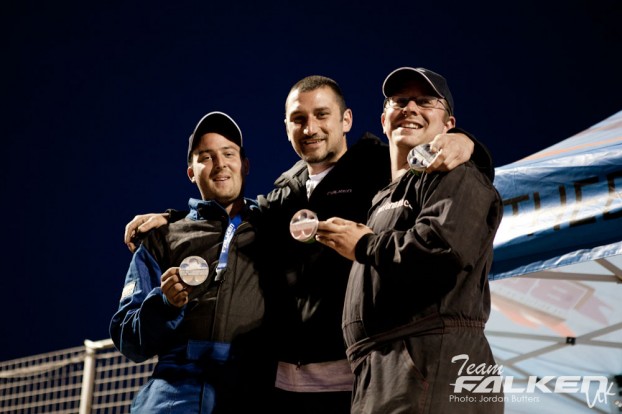 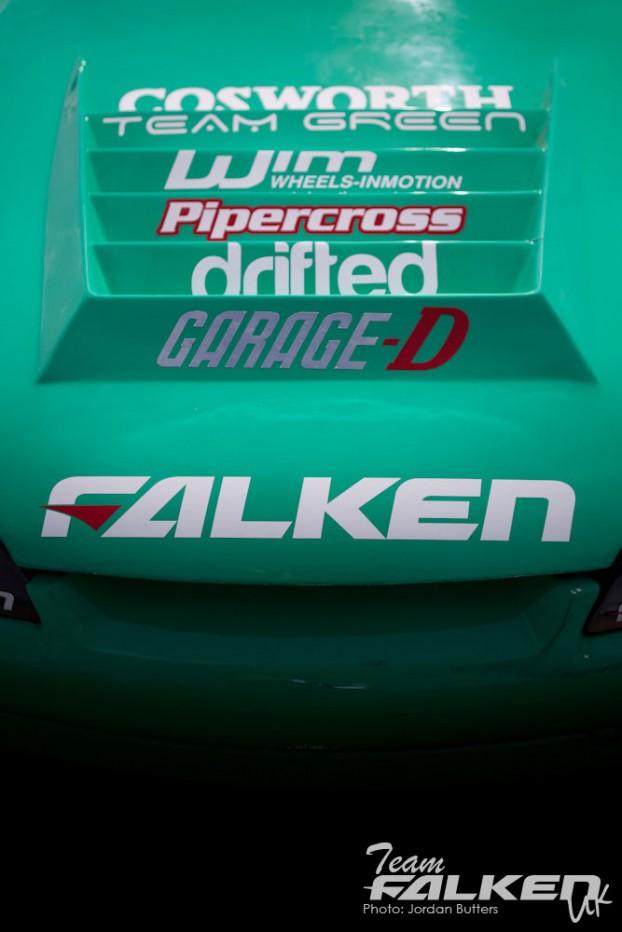 So as we sit here the day before we are due to load up for the Nurburgring you would think all is rosey? 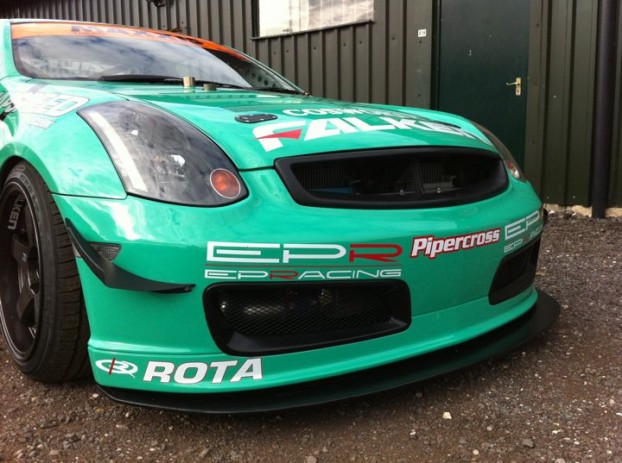 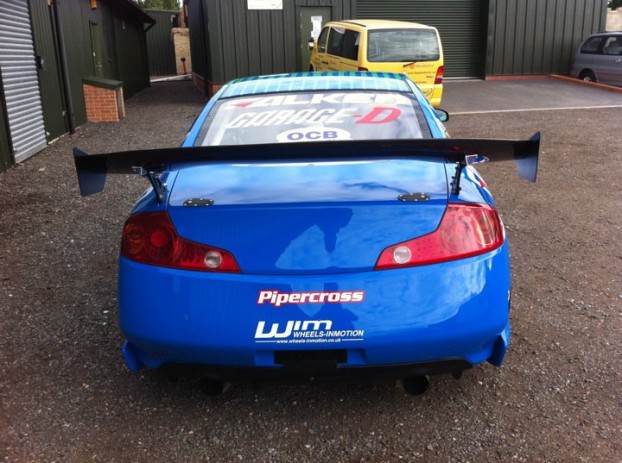 Well the G35 is back in one piece and sporting some new additions in the way of a low-rise carbon fibre GT wing and front canards too, we’ve also treated it to two black eyes and got rid of the chrome headlamps! What do you think?

Jem from Detailing Jem also swung by and treated her to a full detail! Shiny! 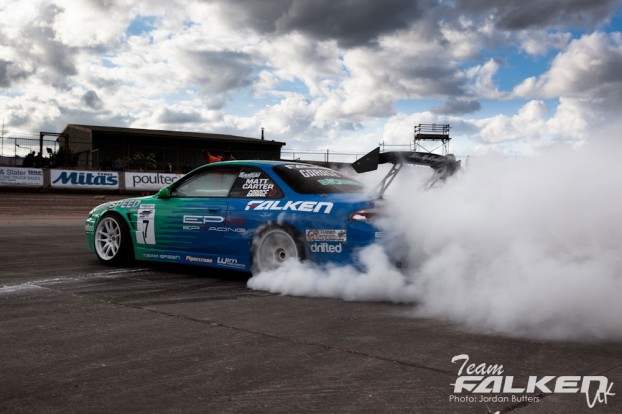 However Matt’s 1JZ S14 isn’t doing so well! As you may have noticed Matt likes his rev limiter and the continual abuse he’s been giving it so far this season (the crowd pleaser that he is!) has taken it’s toll.

The HKS pulley has been completely sheared off!

The shim jumped out of the bucket and got jammed between the head and cam, causing the vernier pulley to slip, dowl to shear, the pulley bolt to tighten and strip the thread and the cam belt to shred a few teeth and jump. Luckily the 1JZ is not a interference engine so hopefully the valves are all OK!

Fingers crossed we can get it all back together ready to load up and enjoy some insane drifting at one of the most amazing circuits in Europe. We’ll do our best to update from the road but it all depends on internet connectivity in Germany. If you can, come along to the ‘Ring and say hi!