If I was to describe All Star Bash in one word, it would be: Hot. I am Canadian and I have a permanent fur coat on my chest. The desert is not my natural environment. Despite this, I could use another word to describe ASB: hellafunpartydrifttimesinthesun. Yeah… I went there.

In case you weren’t aware, ASB is the go to event on the West coast. Guys from all over make the trip to Willow Springs Raceway near Rosamond, California to shred tires and party for two days in the desert heat. 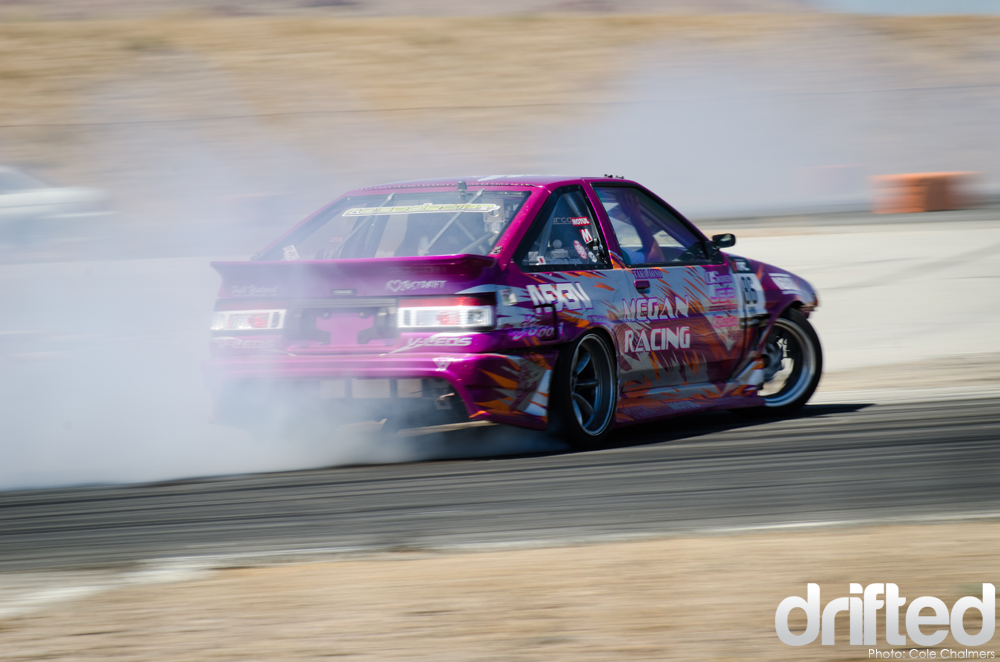 The rad thing about ASB is drivers of all skill levels hit the track. Meaning, if you meet the requirements for tendems, you could be shredding with Formula D pros like Matt Powers or Taka Aono (above)…. 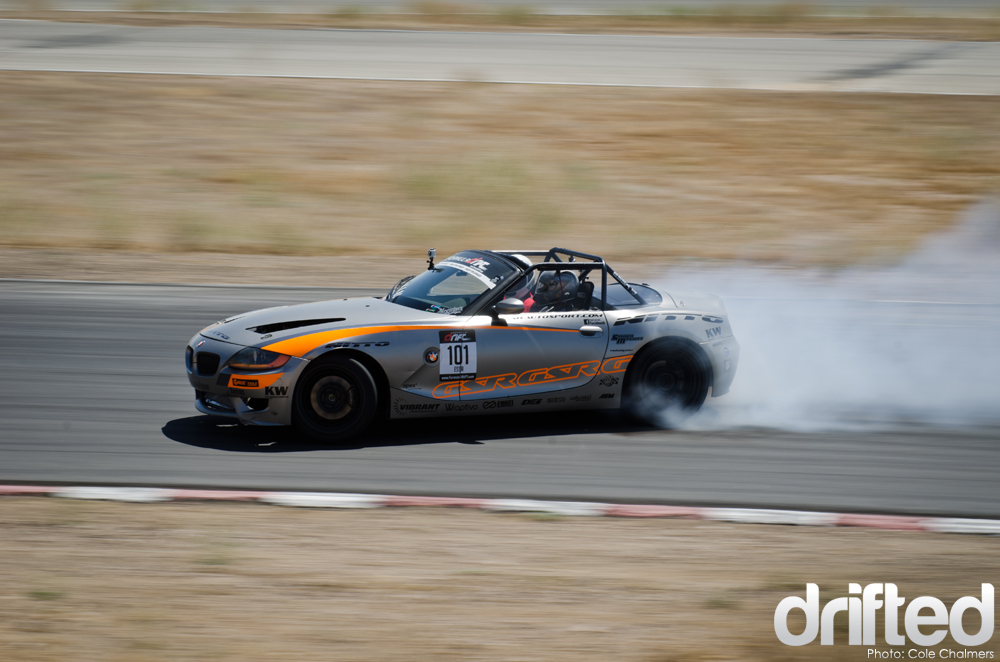 …. If you could keep up anyway, I don’t know what it is about Micheal Essa’s BMW, but hot damn does that thing fly. 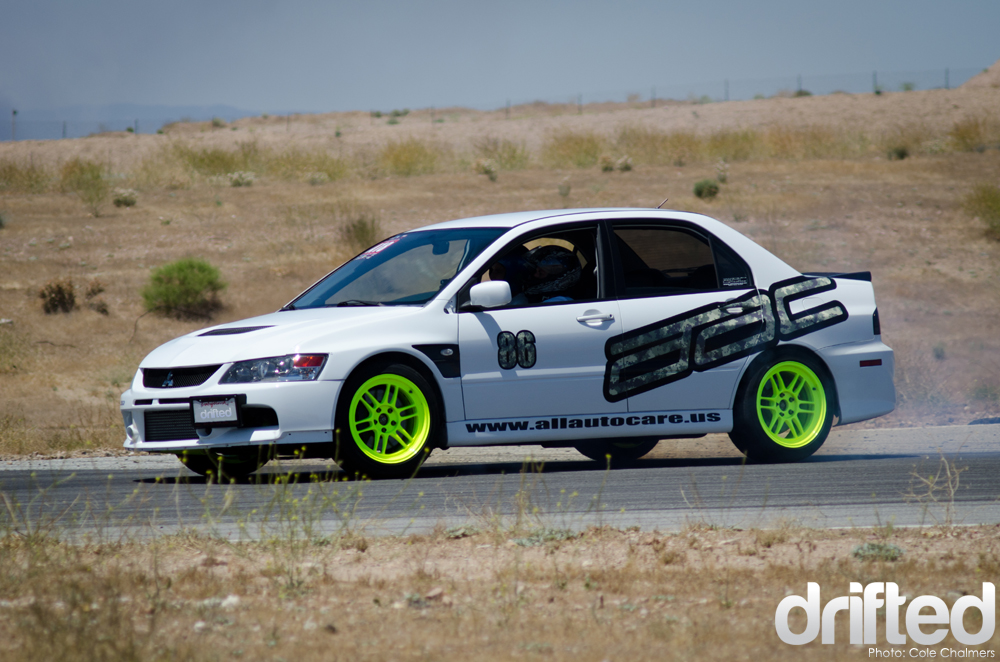 An interesting sight on track was this Mitsubishi Lancer Evolution that was doing some all wheel drive sliding. The next Ken Block perhaps? 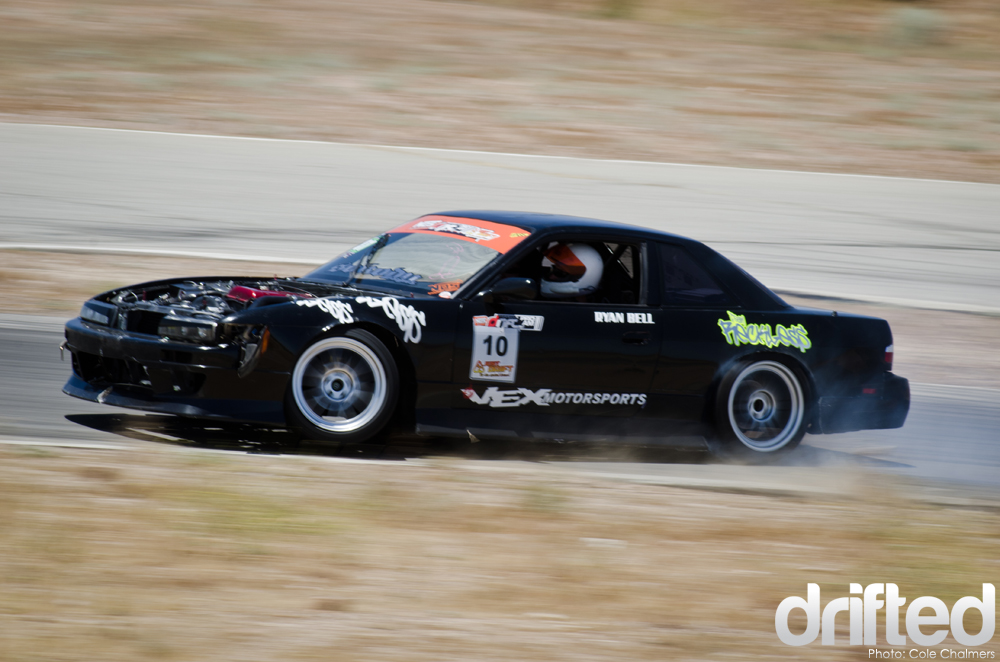 NorCal resident and Team Reckless ripper, Ryan Bell, popped my on-track cherry at Willow Springs. In the passenger seat with him while following Matt Powers was something else. I’ve always wondered how hard it was to see through that much tire smoke. Answer: You can’t. 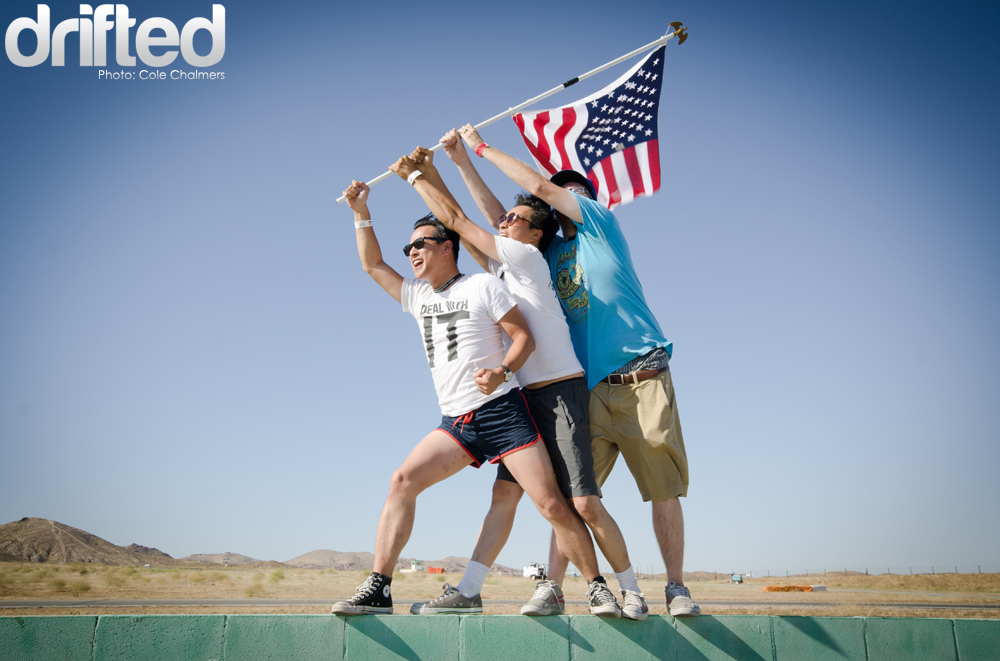 With the 4th of July just around the corner there was plenty of patriotism shown on and off track. American flags were waving proudly everywhere.  Linhbergh Nguyen, Larry Chen, and Mike Garrett were holding the flag high and proud, somewhat reminiscent of the iconic Iwo-Jima photo, when suddenly… 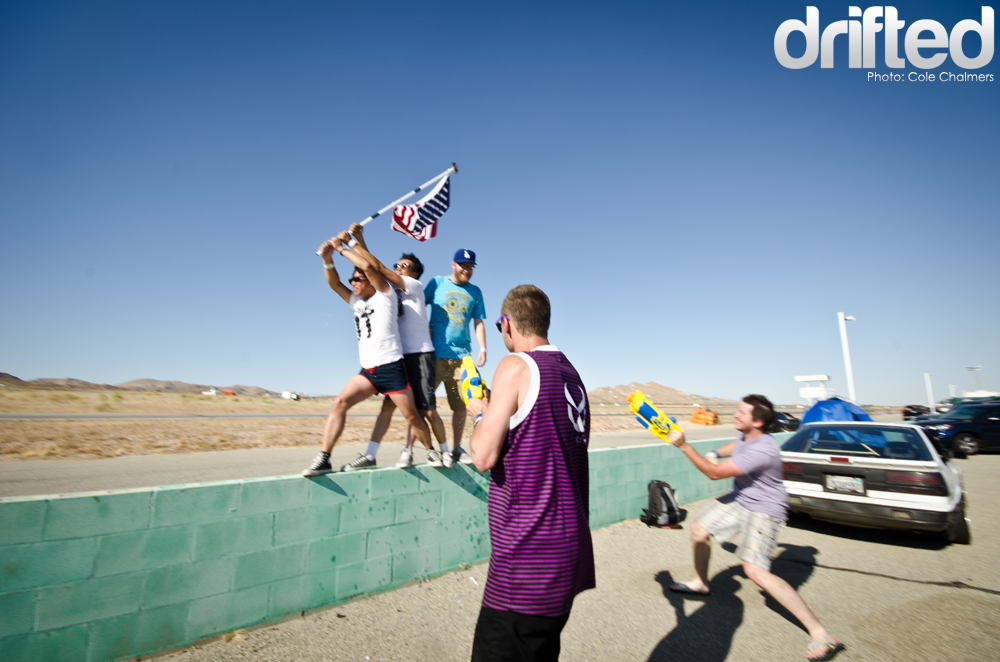 … Canada attacked! Canada day had just passed and Shawn Browne and Logan Noel of Drift Union weren’t about to have their thunder taken without a fight. 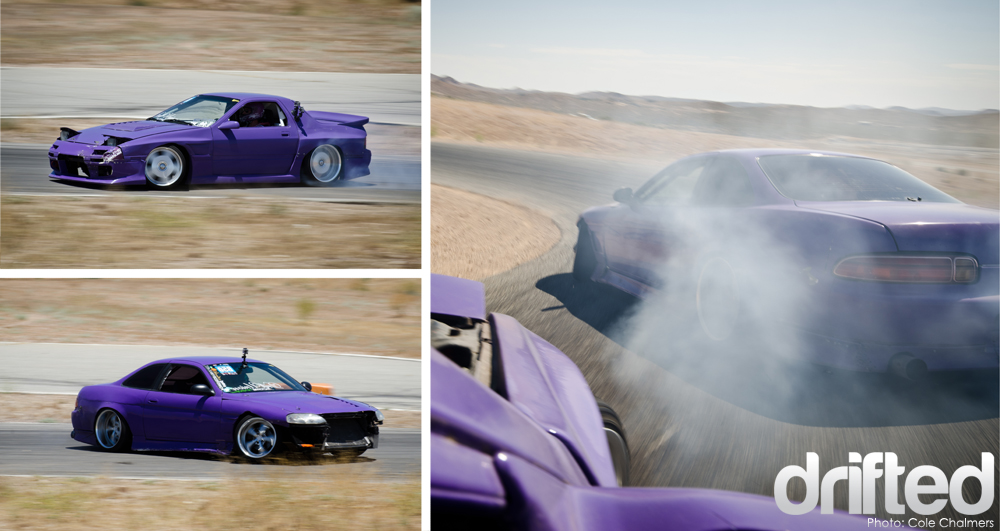 Speaking of the boys in Purple, it was a bitter-sweet weekend for Drift Union. Logan’s Subaru Legacy spun a bearing on his second run, leaving him pitside for the rest of the weekend. Driving 24 hours to only get a short amount of track time has got to be a huge bummer, but Logan kept in good spirits and later that night, Drift Union teamed up with Mulsanne Drift to win the team tandem competition under the lights. The heat caught up with Shawn’s FC later on sunday though, his rad couldn’t keep up with the extreme temperatures and overheated his rotary. 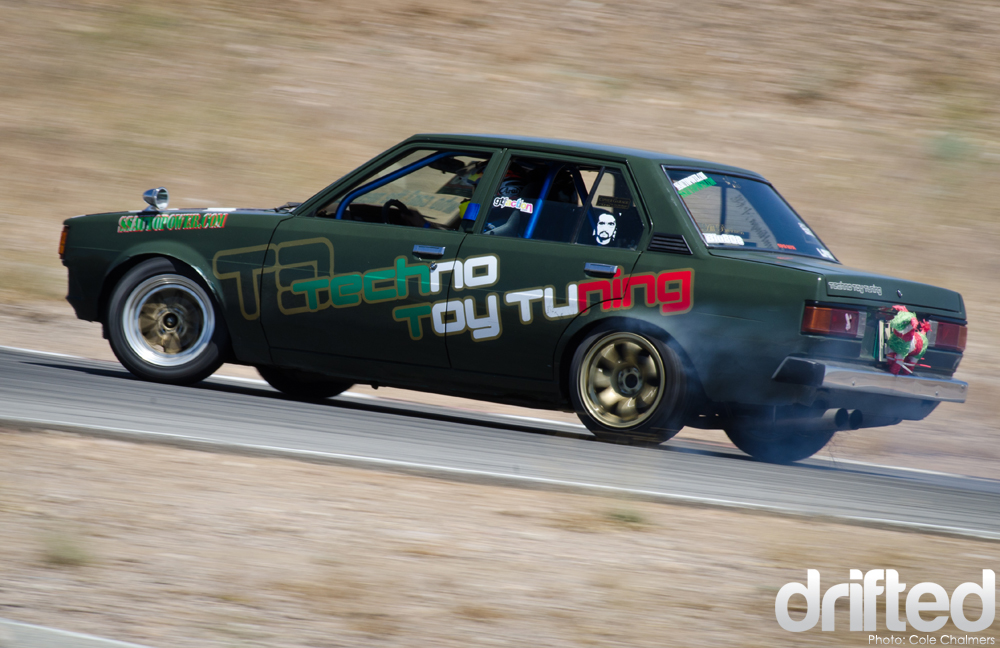 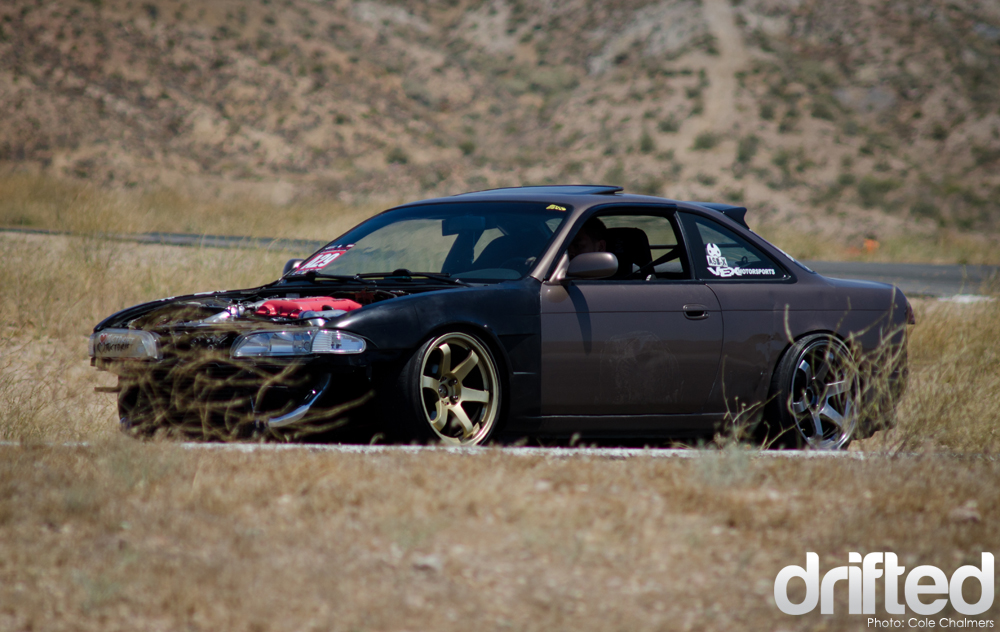 While the heat was rough on a lot of cars, Aljed Solis spent almost an entire day swapping out his blown tranny in the heat… only to find out that the tranny he swapped in had no reverse gear. Luckily you don’t need reverse for drifting… 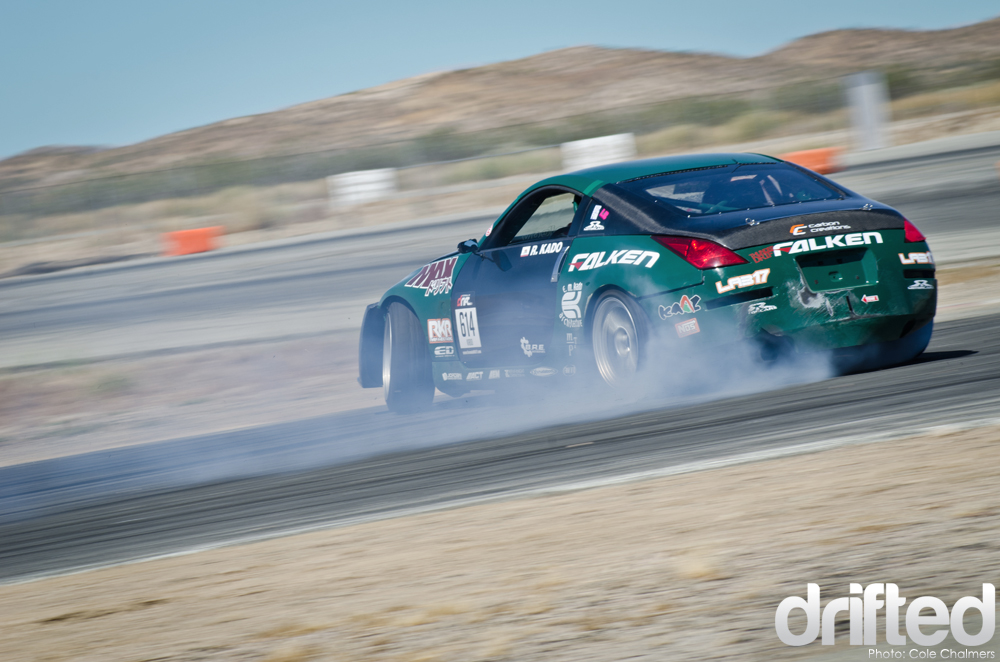 …though if you’re Ryan Kado, you may get backwards. 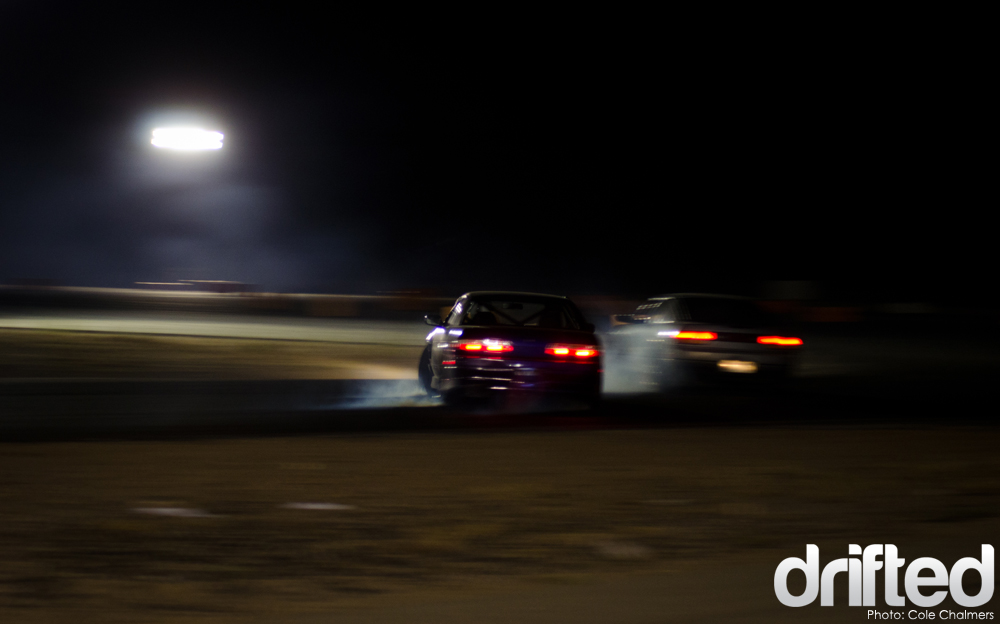 Once the sun went down, the temperature became much more bearable.

Also, driving under lights is dope… 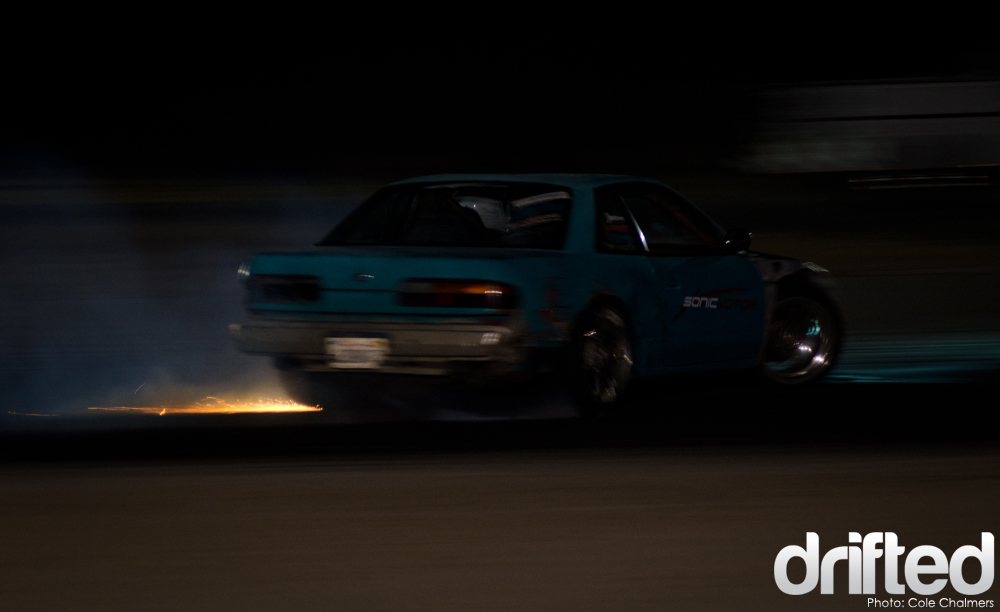 When we arrived at Willow Springs on Friday night Van Williams was the first guy to say hello and offer me a beer. Instant best friend, apparently it doesn’t take much to win me over. His corolla was having some trouble in the heat as well, but he was all smiles and was making moves regardless.

I met the rest of Van’s crew, Team Battle Sex, who are from the Thousand Oaks area of California. Jesse Vargas is a straight up gangsta in his 350z, he was pumped that Drifted was there and apparently reads the site often. 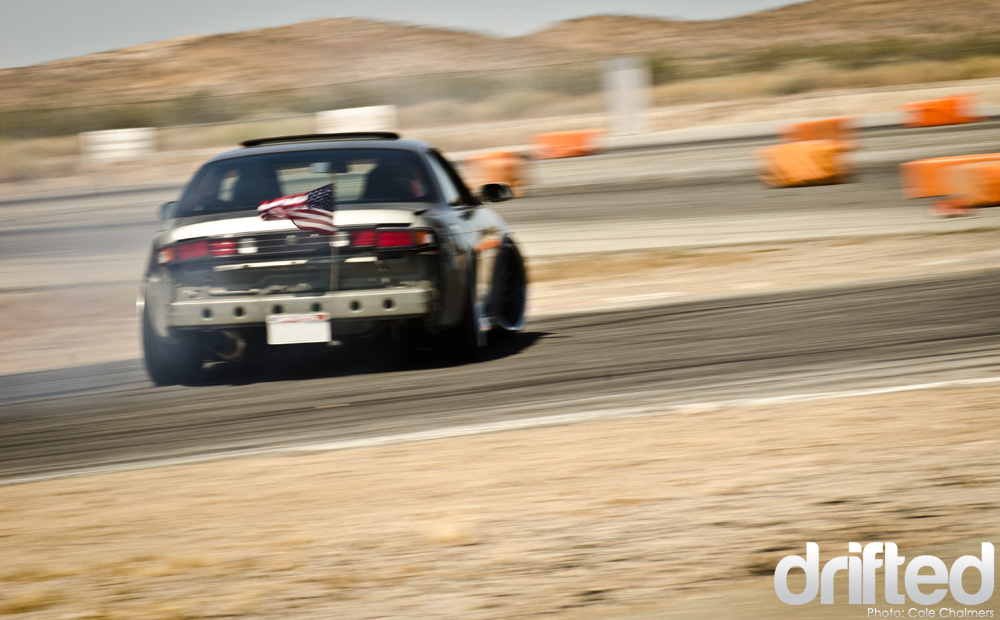 Another Battle Sex member, Adam Levi was reppin’ the red, white, and blue off the rear of his SR20 powered s14. I was constantly stopping by these guys’ lot, there was always something entertaining going on and they had beer pong set up all night. Giv’r hell, boys. 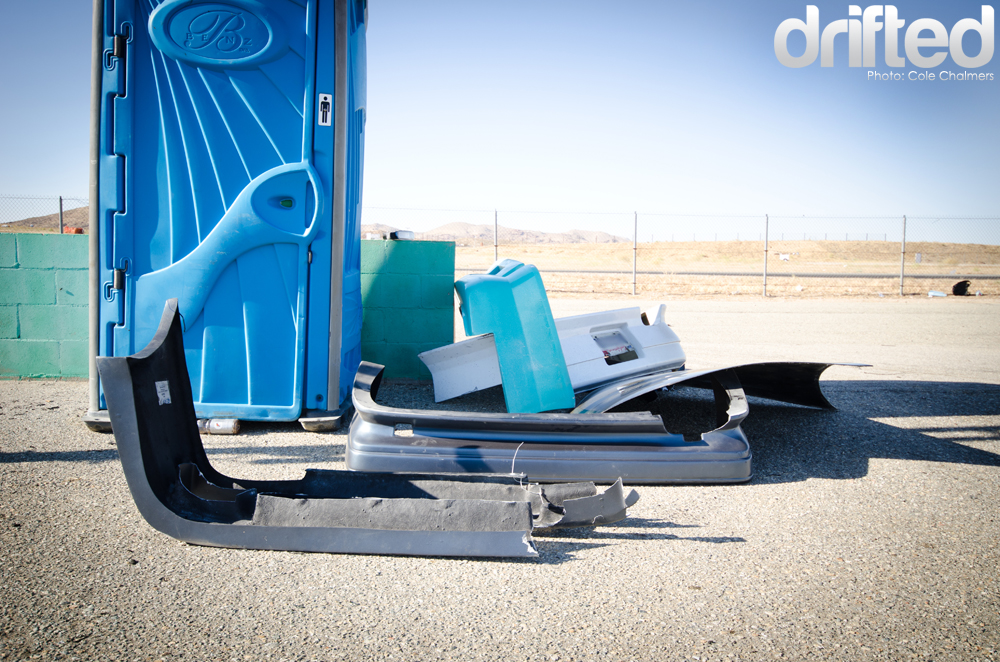 Though there wasn’t a whole lot to hit on track, it seemed like cars were losing bumpers and skirts left, right, and center.

I guess dirt dropping will do that. 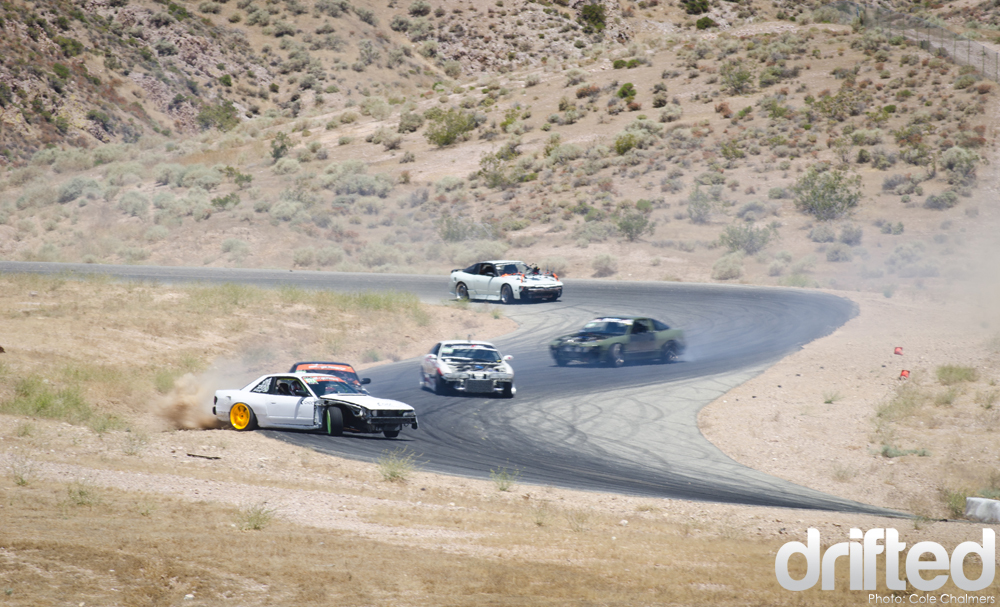 Especially when there are some solid ruts at the edges of the track. Gotta pay the price for getting rowdy though. 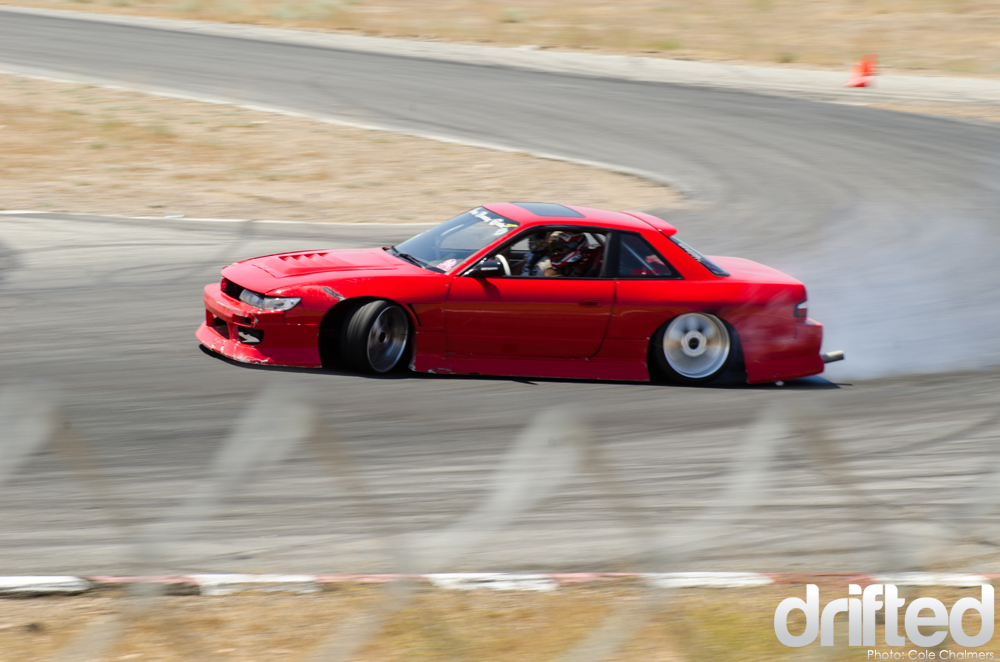 I missed out on All Star Bash last year and didn’t hear the end of it from Drift Union. So I pulled all the stops to make it happen this year, even though I really couldn’t afford it. So I really want to say thank you to a few people before I end this article.

Big ups to Drift Union for going out of their way on multiple occasions for me, driving out of their way to pick me up and drop me off, letting me sleep in their hotel rooms, and just being unreal in general. I owe you guys huge. Mad props to Matt Field and the rest of the Field family for the hospitality. They cooked us an unreal BBQ and let us stay the night at their place in NorCal. 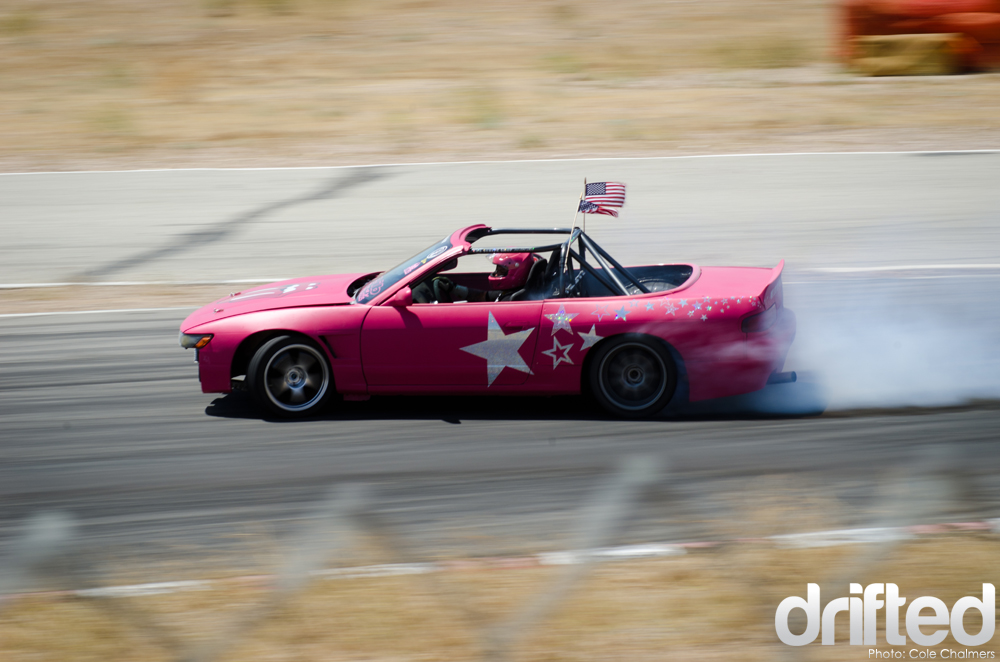 Props again to Matt Field for letting me sleep in his truck (I brought nothing but my clothes and camera gear). Thanks Ryan Bell, Aljed Solis, Daniel Chow, Jesse Salazar, and anyone else hanging at Camp Nor-Can for sharing all the food, water, and beer. To my new friends in Team Battle Sex, thanks for being bros and welcoming me into your party zone. High fives to Drew Fishbein for the waters and hangouts in the OMGDrift RV 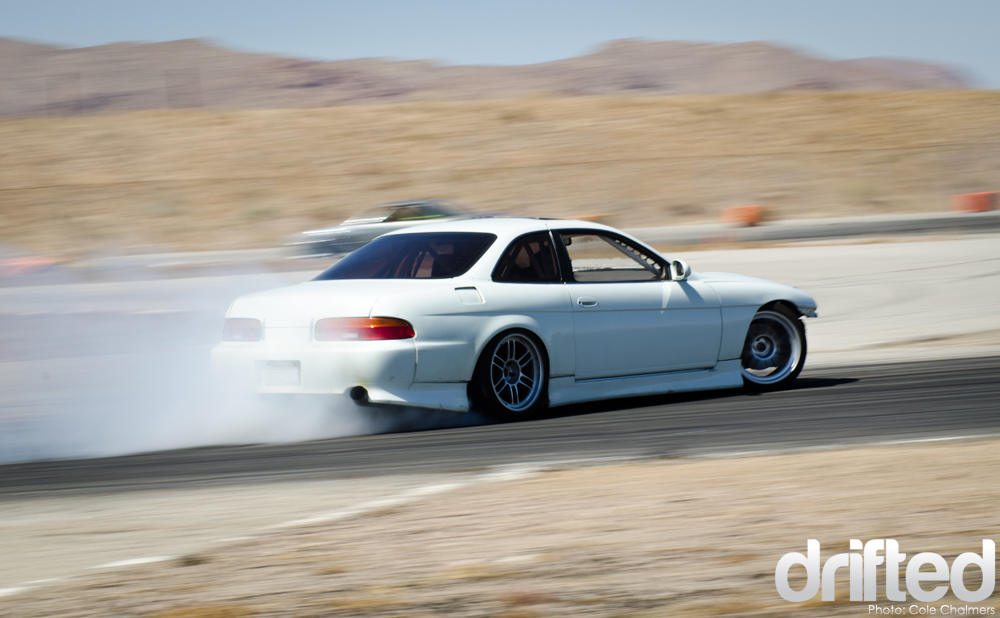 Thank you Ian Dillon at Factory 83 in Washington for going way out of your way to get me to the ferry terminal back home to Victoria, if it weren’t for you I would still probably be in WA, broke and homeless, begging for change or something worse. And of course, thank you Charlie Ongsingco and Just Drift for making All Star Bash happen. I’m sure I’m forgetting a bunch of people who helped me out in some way shape or form, you guys are all awesome. It’s the people in drifting that get me stoked, almost as much as the driving, and you guys all keep it real. Can’t wait for ASB XII !

Full Gallery can be found at my flickr HERE.