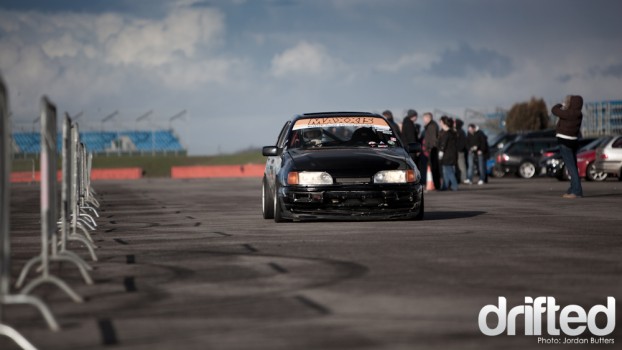 Saturday the 12th of February kicked off the 2011 season with a qualifying day for the British Drift Championship.  New names who wanted to get in on the action and drive amongst some of the finest drivers in Europe had their chance to impress the Judges.  Myself, Jord and Phil popped along to find out who would make the drivers list for what is set to be a very exciting year of competition.

Its been a little strange over the last few months – drifting seems to take an informal 2-3 month break through the worse of the winter  so there hasn’t been a great deal happening.  Drivers and teams lock themselves away in garages fettling their machines,  the Judges hibernate and we generally put our feet up and wait in anticipation for it all to start up again.  The first day of the season always tends to draw the community back together and its always nice to see old friends.

Many had traveled a fair way to make the day but maybe none of them quite as far as Hugo Fernandes and Andre Soares who had mad the trip all the way from Portugal! Jord and I had met these guys back in 2010 out in Lousada at the KD European Drift Championship and it was great to see them again.  Hugo drives a very potent Toyota Soarer but today he would be qualifying in a borrowed S13 200SX.

After an 80 mile journey along the M1 I found myself at Silverstone Circuit.  I queued at the barrier to make my way into the infield behind a steady stream of Porsche’s and various other track cars.  A track day would be taking place on the main circuit whilst the BDC event took place on one of the large paddock car parks behind the pits.  When I got to the car park there was already a busy pits with drivers making a final check over their machines before the qualifying started.  There was a very out of place Riviera Blue Porsche 993cs amongst the cars – surely not a competitor ? It seems the chap had got lost on his way to the track day and he soon moved on leaving behind the usual array of Nissan R and S bodies,  E36 and E46 Bodied BMWs, Ford Sierra, Toyota Supra, AE86, 300zx and a Honda s2000. 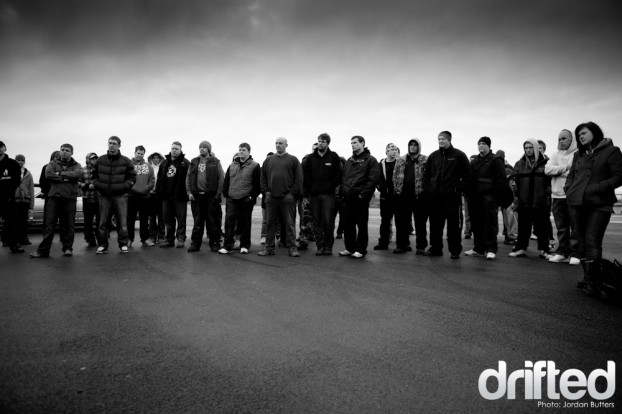 After media sign in and a walk up and down the pits Mark ‘Sweeps’ Buckle called everyone towards the control station – it was briefing time.  With a lot of the Pro and Semi pro drivers continuing on their licenses from the previous year the crowd was made up of a lot of unknown faces – I’m sure some will become a lot more familiar over the coming months.  Sweeps explained the format of the day along side chief safety man Darren Matthews and then moved on to explain the course itself.  Tracks laid out on car parks with cones often require a little bit of imagination – without the lines of a circuit to follow it can take a few runs through the course until you begin to feel your natural line.  It always helps as the rubber starts to build up and show the more common lines being taken by drivers.

So onto the course – from the start line the the drivers accelerate down a 100m straight and initiate into first 90 degrees left-hander with a front clipping point. After 30m or so the drivers have to scrub off some speed to make a transition right into a tight chicane followed by a quick flick left and another flick right into a 180 degree turn.  The drivers then exit the turn piling on speed for another 40m or so before crossing the finish line.  The usual media and safety briefings followed and Doristars Ross Ianson made it very very clear where media could and definitely should not be whilst the track was hot.  For most this is common sense – if you don’t feel safe you most likely aren’t. The drivers were divided into two groups and we were off! 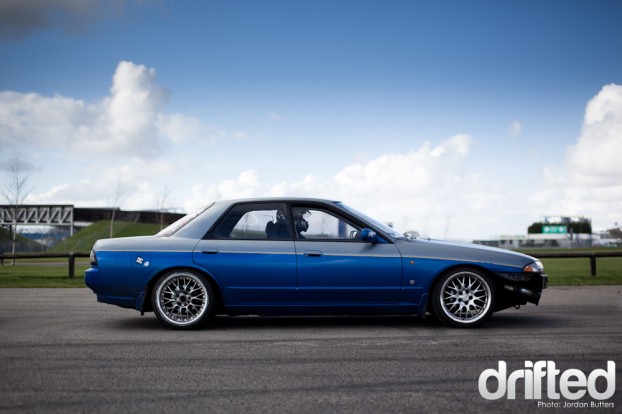 Drivers had some time to come to come to terms with the circuit before they would undergo their 3 judged runs to see if they have what it takes to obtain a BDC license.  In the morning the course proved challenging with the first and fastest corner being damp making it very difficult for drivers to gauge grip levels, but it soon started to dry out.

Ramunas Cepulis pulls his yellow Honda S2000 Turbo out of hibernation for some pre-season fun.  Already a Pro license holder was here to make the most of any seat time on offer.

The turbo charger on this car makes it absolutely fly.  Definitely one to watch out for this year. 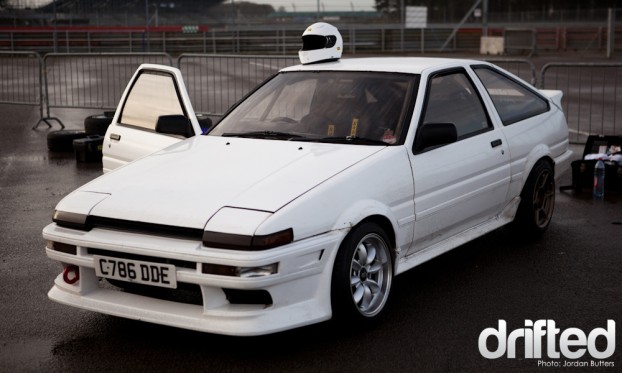 The yellow s2000 wasn’t the only car here running the Honda F20C engine.  This white AE86 Trueno owned by Martynas Zizas has also had a sizeable power upgrade and now runs the high revving F20C motor in normally aspirated configuration.  This car is said to be running approx 220bhp which is a little down on the factory standard figures from Honda.  One challenge that RHD AE86 owners have to overcome when running this engine is the standard Honda exhaust manifold can no longer be used due to different layout engine bay and the steering column.  These engines are extremely sensitive to exhaust runner diameters and lengths.

That aside the additional power on tap was immediately obvious when watching this car out on the circuit.  The car didn’t bog down as easily as a regular average tuned 4AGE-powered car making gears work a little easier.   Unfortunately this time Martynas didn’t make the grade but I’m sure he will be back to try again.  We’d really love to see some more AE86 bodied cars in the UK scene. 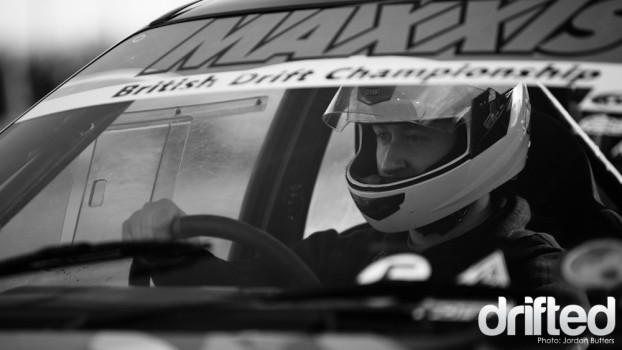 Adrian Brannan waited on the start line for one of his judged runs – his Ford Sierra Sapphire is a rare sight in competition use in mainland UK.  This particular example is powered by a 24v 2.9 quad-cam v6 Cosworth engine normally found in the Ford Granada Scorpio and goes pretty well. 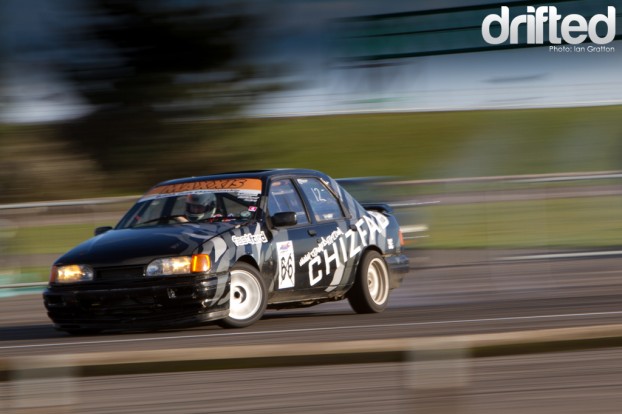 Adrian came away with his Semi Pro licence. 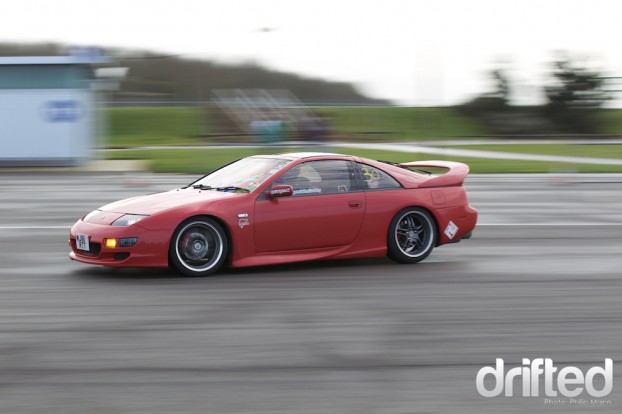 The Nissan 300ZX is yet another rare sight in UK Competition.  Unfortunately this time Alex Law didn’t quite make the cut.  Contending against an open differential the car looked a handful once sideways. It will be nice to see a more varied range of cars out there so well done for not just going the usual route!

This stock looking, yet competition spec white PS13 Silvia was shared by both Mark Annette and Marc Huxley.  Both came away with Semi-Pro licenses.

Luke Fisher was out having lots of fun in this slightly colour uncoordinated PS13 Silvia.  But unfortunately no license this time.

Adam Day came away with a Pro license in the Silver Nissan R33 Skyline.  This car looks much more purposeful for the rear widened arches.

Justin Griffiths made the upgrade from Semi Pro to Pro with his Rocket Bunny-kitted Nissan s13.

Marcin Mucha gained a Semi Pro license in his very clean White Supra. Something tell me that after a season’s competition the car won’t be looking quite so pristine. 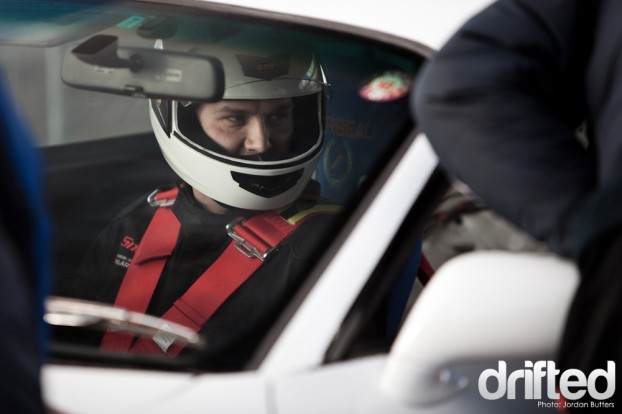 Marcin discusses his runs with friends in the crowd following licensing.

Stuart Egdell’s Black S13 had a serious looking green cage. Shame he had removed the aero for the event. Note to drivers – photographers much prefer shooting cars that look complete! All the same, Stuart earned Semi Pro accreditation.

Matt Hitchcock’s silver E46 BMW was one of the best prepared cars on the day. We’ll be seeing more of this fantastic car this year as Matt gained a Semi Pro license. 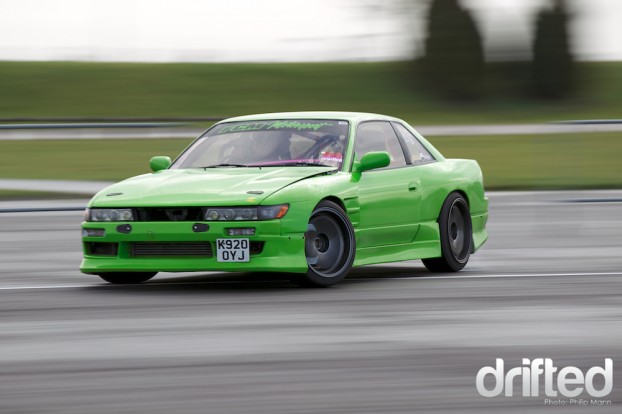 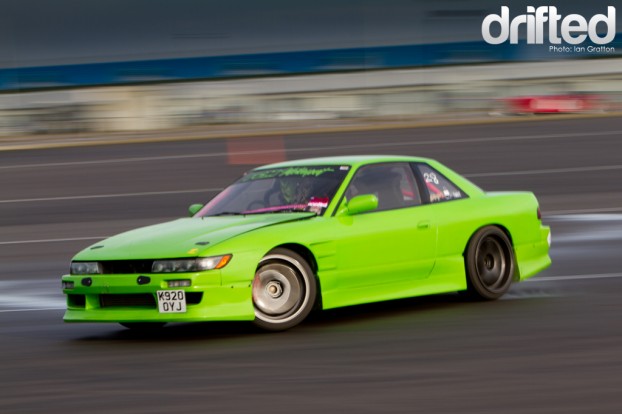 The ‘Kermit’ PS13 was being piloted by two drivers on the day, James Bull on his second licensing attempt was awarded a Semi Pro license, and Faruk Kugay who sadly did not achieve licensing this time. Faruk’s style was a joy to watch though with fast aggressive initiations into the first bend and he explained to me that he was just there to have fun and not pushing too hard.

Here Faruk and James catch a moment to discuss things between runs. 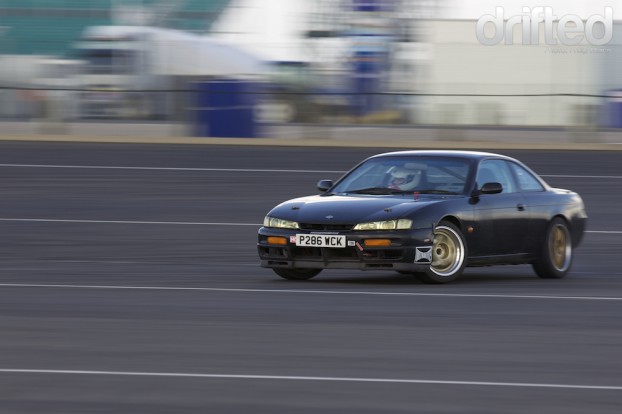 James Fuller drove his stock-looking S14a to a Pro license. James was throwing down some pretty mad manjis at the start of the day as he found his groove. 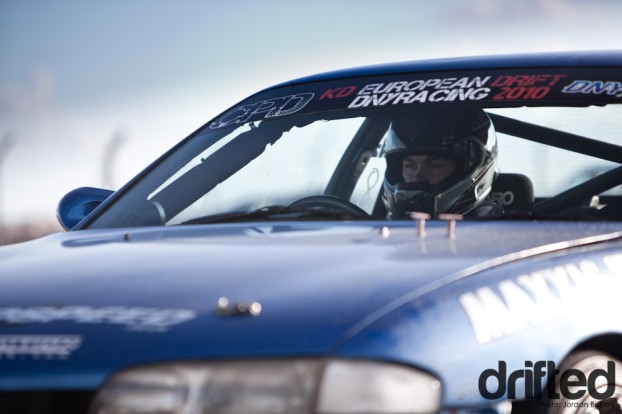 Rallycross driver Liam Doran was at the event in the ‘spare’ Japspeed car. Following the retirement of Danny Eyles from the Japspeed team this year is this an indication as to his replacement?

Liam’s rallycross skills being put to good use with fast weight-shift entries into the first corner.

Andy Redmond’s well presented S14a rounds the first bend during the morning. Andy was present to attempt to upgrade his Semi Pro license to Pro. Sadly he missed out on the day. Nevertheless we look forward to seeing Andy compete this year as he seems to be getting to grips with the car nicely.

The full list of licences awarded on the day were as follows:

The first round of the 2011 British Drift Championship takes place on 22-23rd of April at Donington Park.  Each year this championship goes from strength to strength and we have a fantastic year ahead of us.  If like us you love Drifting make sure you make the effort to get along to spectate and support the drivers and teams.