Hey Drifted! My name is David Atkinson and I’ll be covering the Castrol Edge D1NZ National Drifting Championship this year with co-photographer Dave Sanson. The drifting scene here in New Zealand is starting to become hugely popular, with more and more people attending each round. 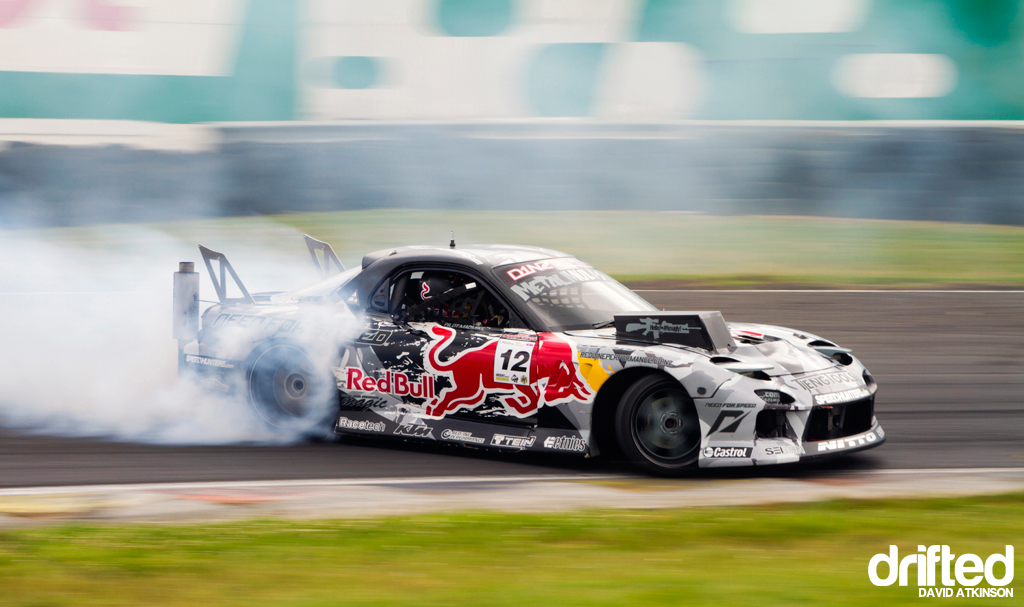 A few weeks ago ‘Mad Mike’ Whiddett took out Round 1 at Manfield Raceway in the wet. This time the action took place at Pukekohe Park Raceway which is known as the world’s fastest drift course, with speeds reaching around 200km/h!

‘Fanga’ Dan Woolhouse set the bar on practice day hitting 196km/h around the sweeper in his V8 powered Commodore.

Drivers were very eager to top this speed and there was strong competition throughout the day. 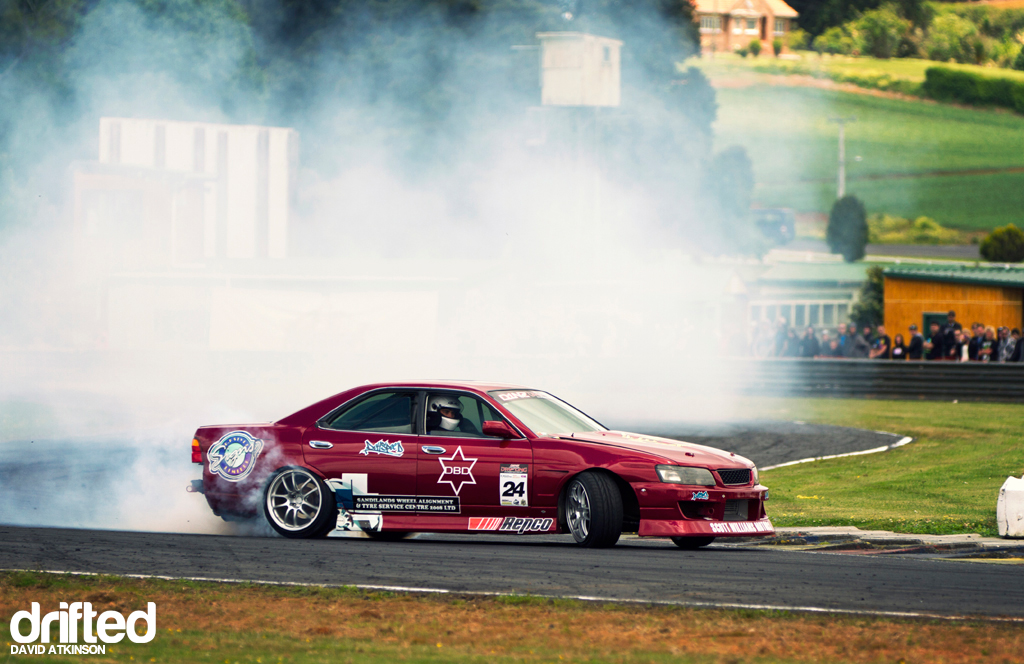 Newcomer Darren Benjamin was looking very competitive on the day, qualifying in first position in his 2JZ Laurel. 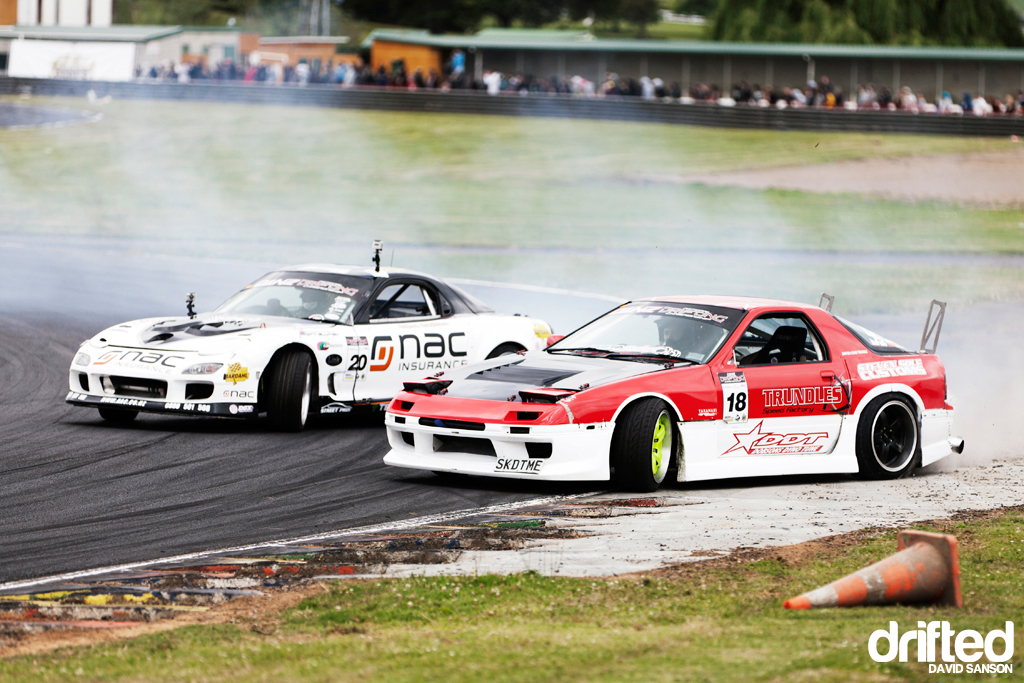 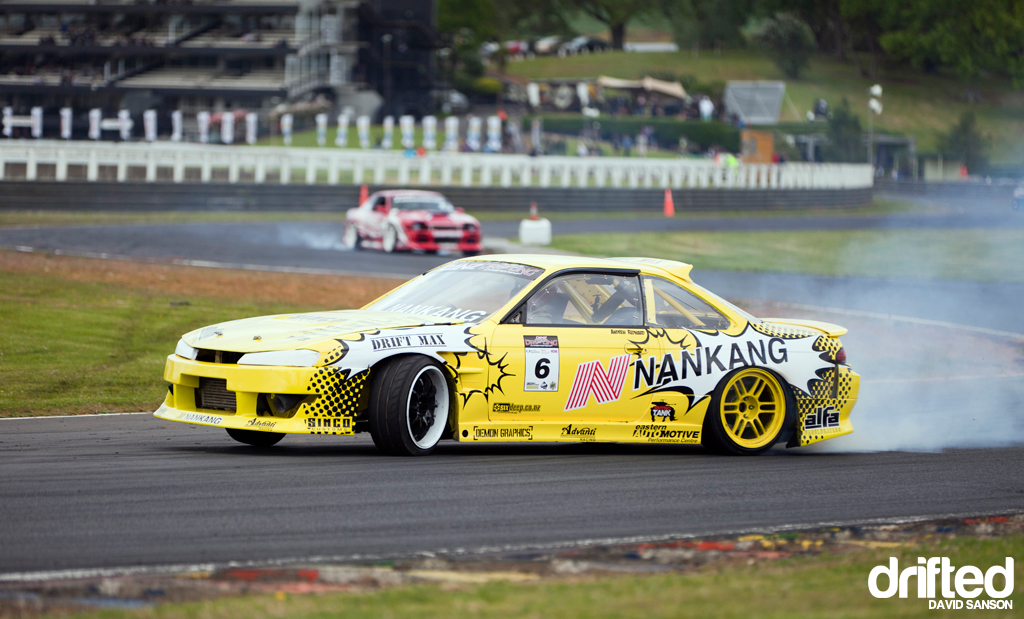 Andrew Redward’s trusty Nankang S14 with colour matched Enkei RPF01s on the back looked great, but sadly wasn’t so trusty, blowing a piston and sending him looking for a loan car.

Bruce Tannock in the Achilles S13 was nailing the long sweeper run after run.

Gaz Whiter, above, is super consistent and being three time D1NZ champion you’d expect no less!

Dave Steedman and Mac Kwok battled it out for a top 32 spot. However Kwok had to step down due to power steering problems in his Milwaukee S13, above. 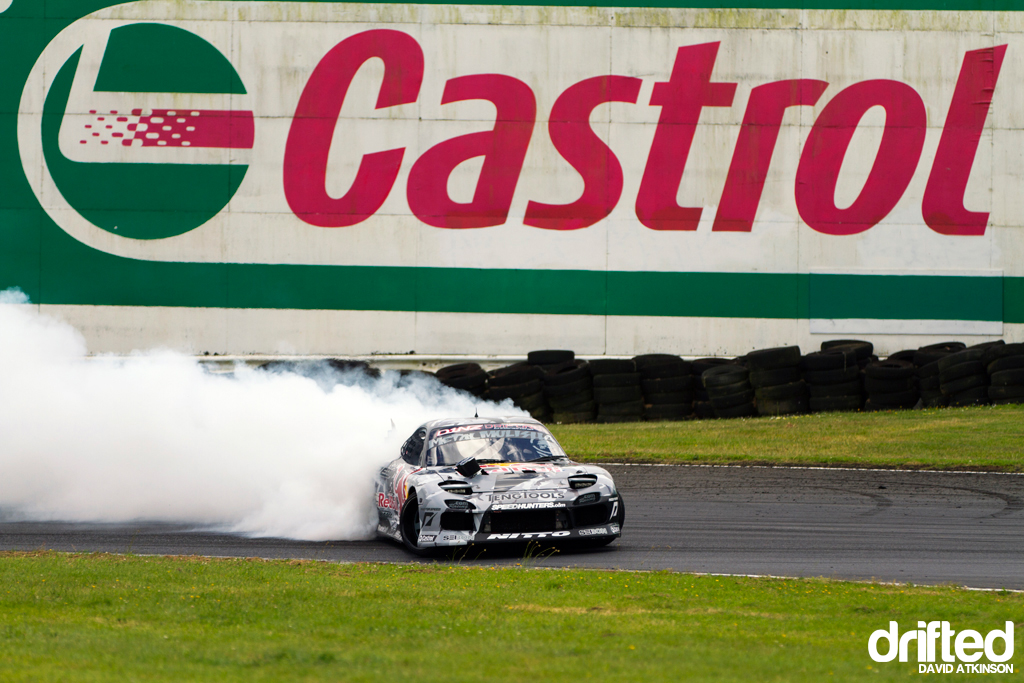 Mad Mike was looking and sounding on form in his quad-rotor Red Bull RX7 FD.

During the practice round he was black flagged due to excessive noise on the track, so he returned with this big rig/trucker style exhaust. 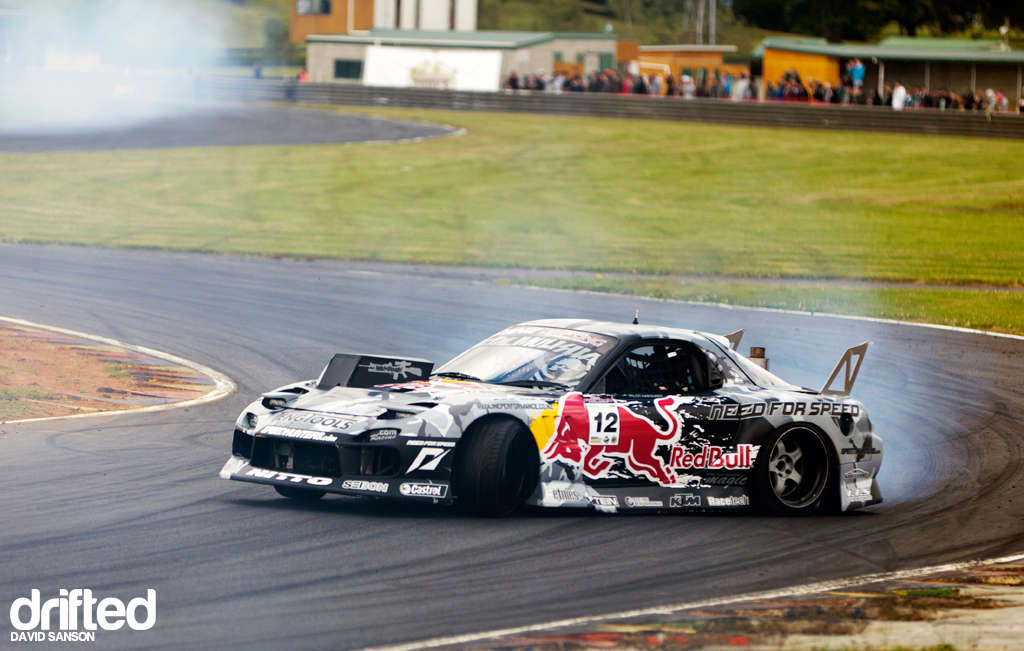 Even that wasn’t enough and the induction noise alone was measured at 96dB! Hence the quickly made square airbox! Sadly Mike only made it to the Top 16 where he suffered differential problems and had to withdraw from battles. 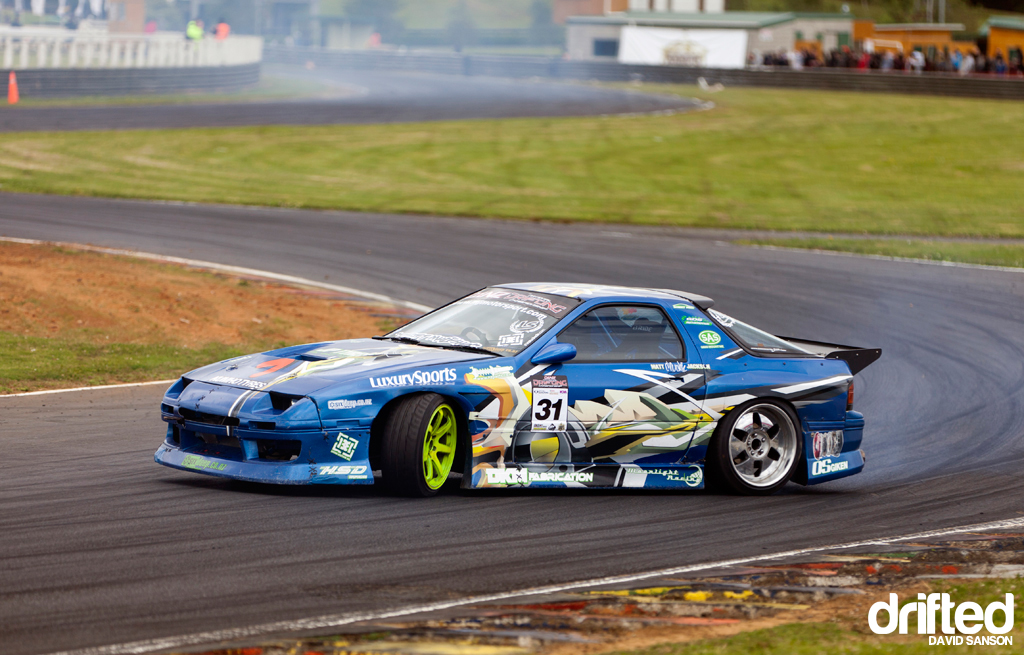 The great looking FC3S of Matt Jackson was also sent home in the Top 16. 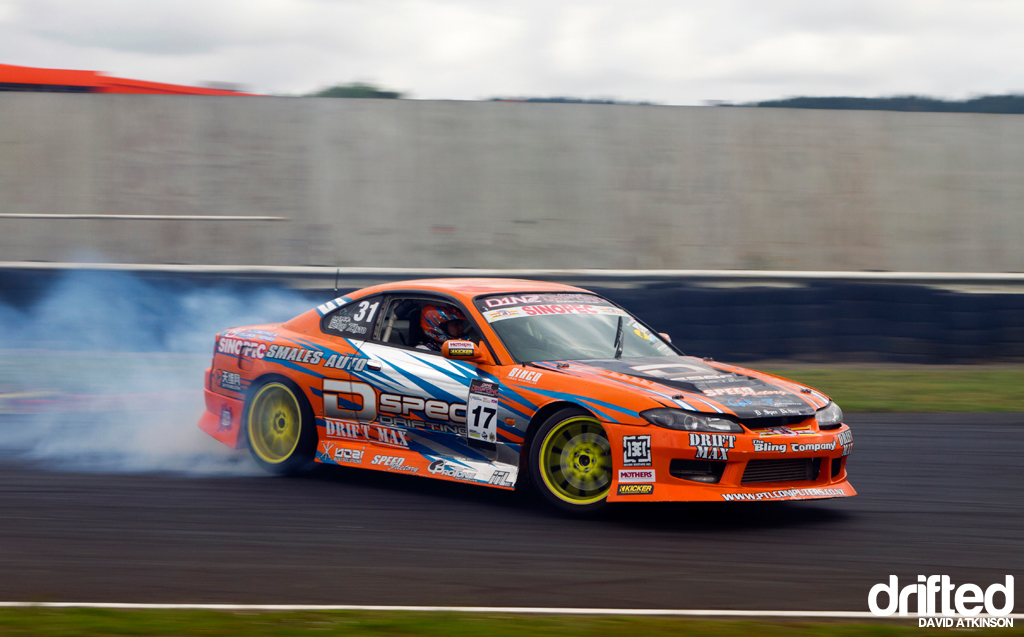 Sky Zhao’s fantastic S15 is always a crowd favourite, the livery looking like something straight from Japan.

Fanga Dan was on form as ever and went on into the Top 8. 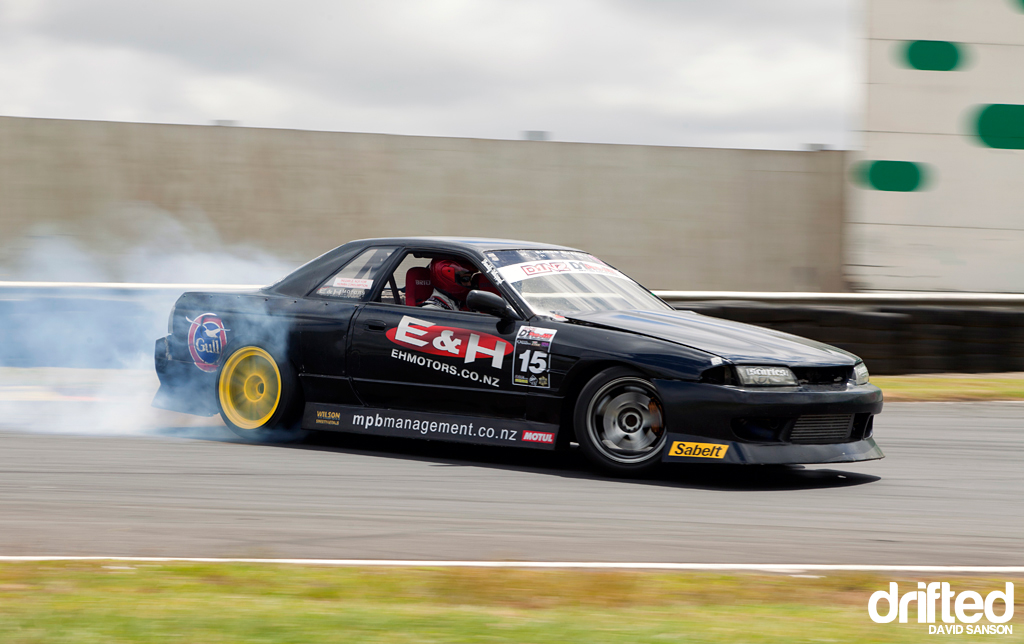 Andrew Redward jumped into the Pro Am R32 of Cam Vernon, above, but could not beat Nico Reid in the Top 16.

Mark Burling was a D1NZ newcomer in him white and dayglo S15. Fellow newcomer Bradley Lauder sent him packing in the Top 16 however.

Chris Trundle and Bruce Tannock were both driving well but didn’t make the Top 8.

Gaz Whiter was pushing his car to the limit all day but unfortunately his car stalled while initiating a drift into the sweeper and he collided with the barrier wall. 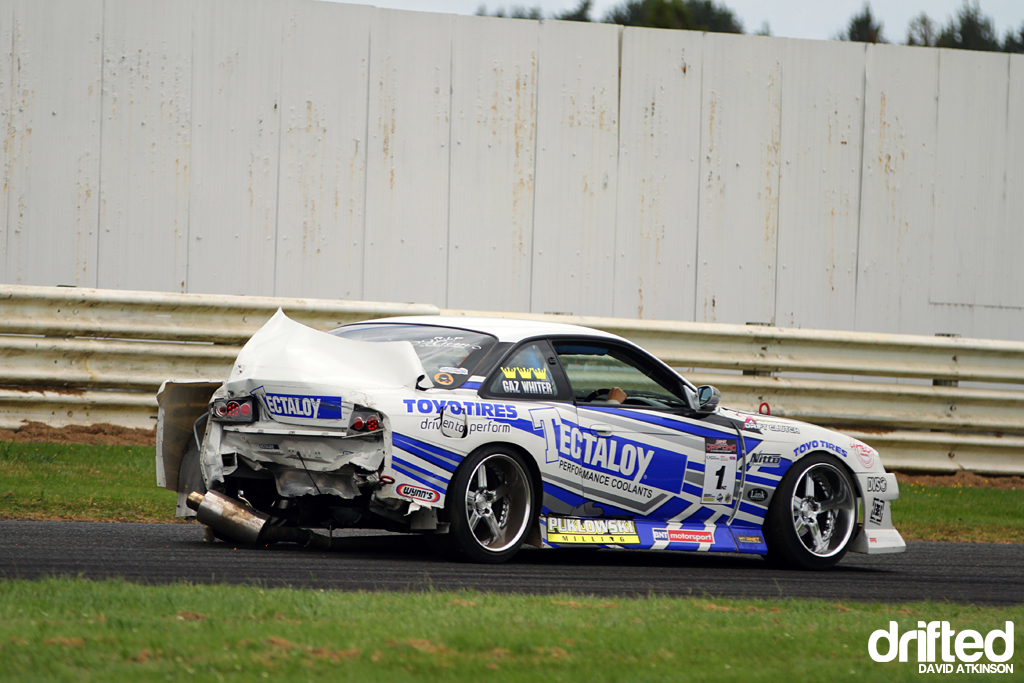 The damage to the rear of his Tectaloy S14 Silvia was extensive and the track had to be closed to clear debris. 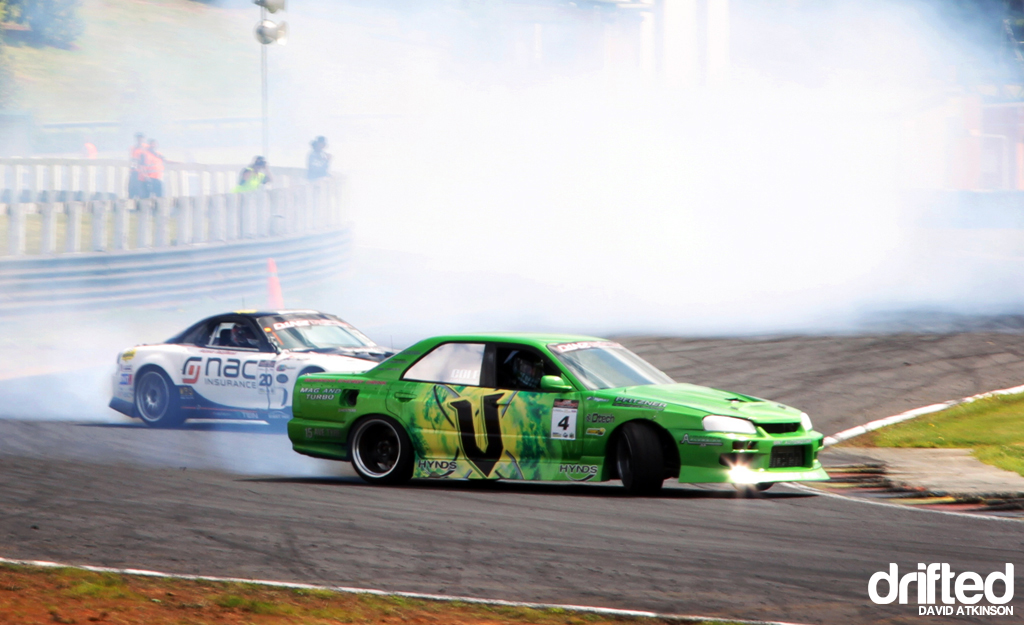 Cole Armstrong took out Daynom Templeman in his V sponsored R34 Skyline to move through to the top four. 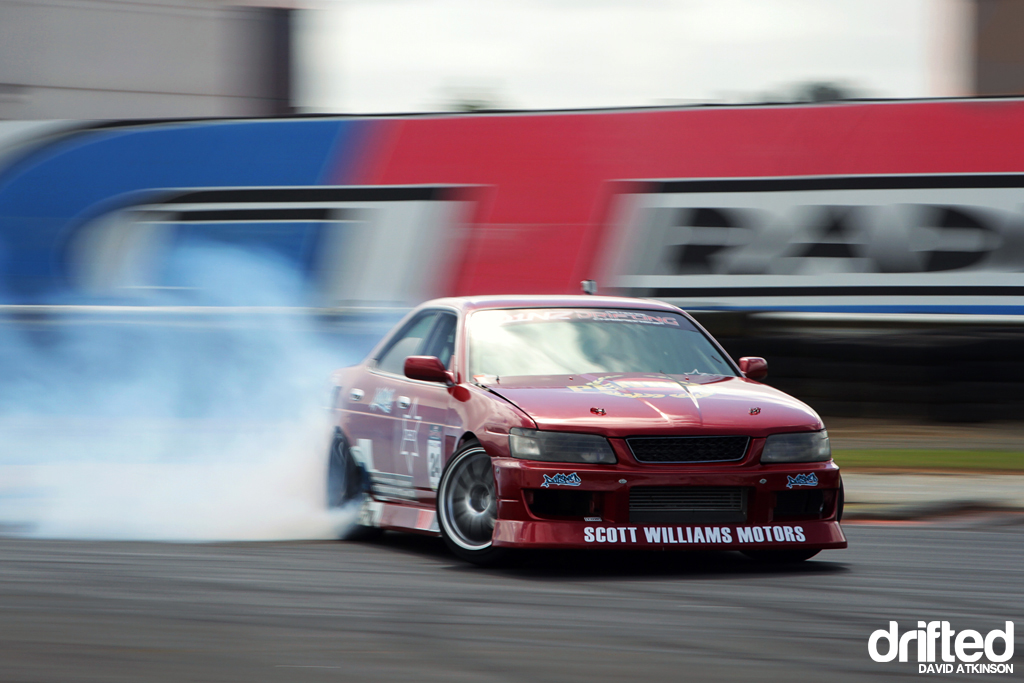 Bradley Lauder was getting some nice angle in his blue on yellow S14 Silvia but was overpowered by Darren Benjamin in his C35 Laurel. 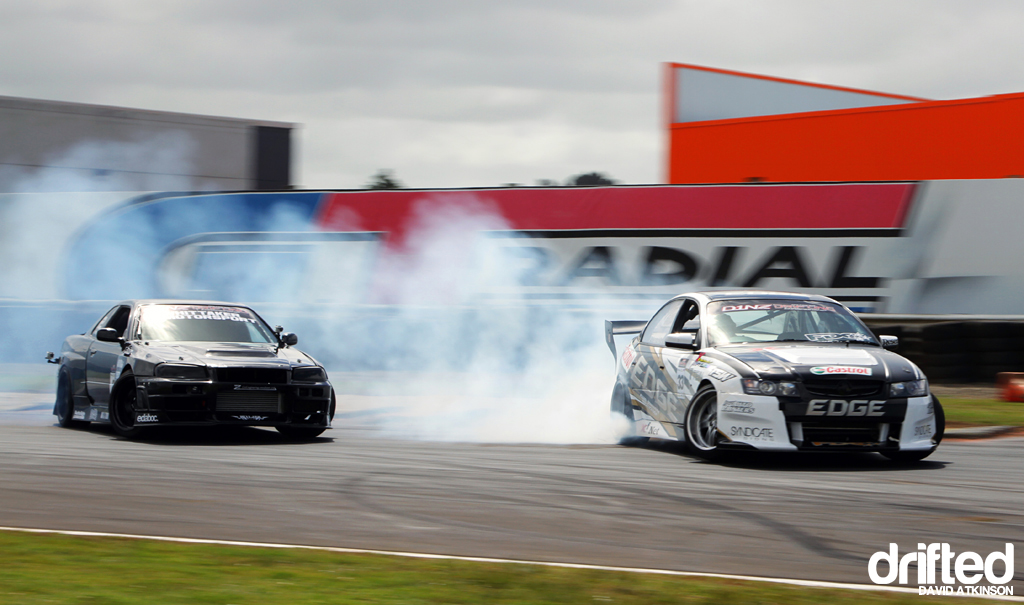 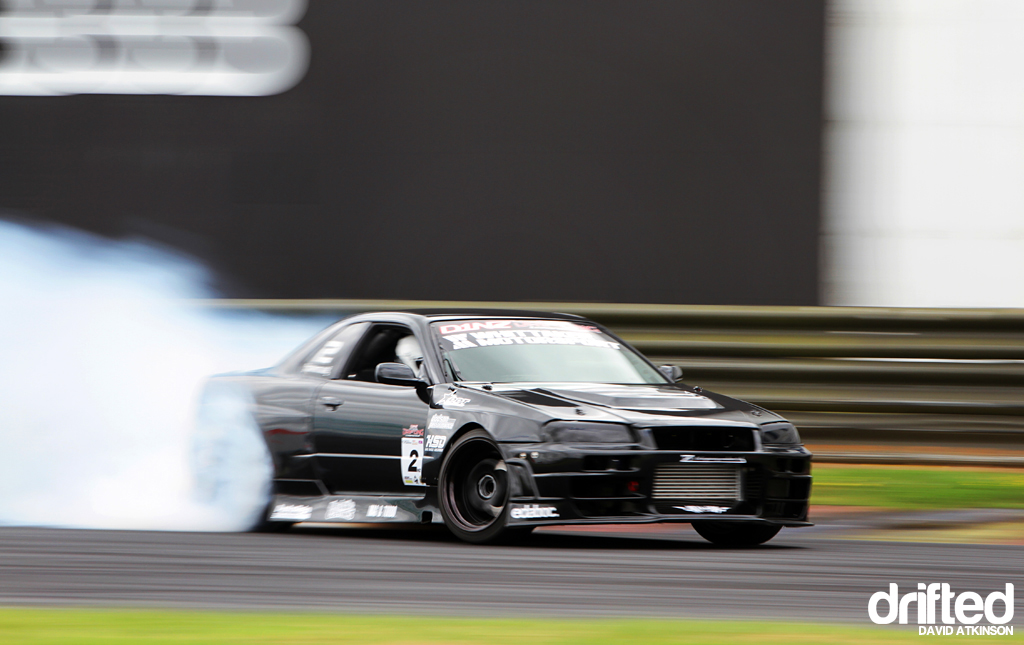 The next battle for the Semi Finals was between Curt Whittaker in his all black everything R34 and ‘Fanga’ Dan Wool- house, with Curt moving through to the next stage. 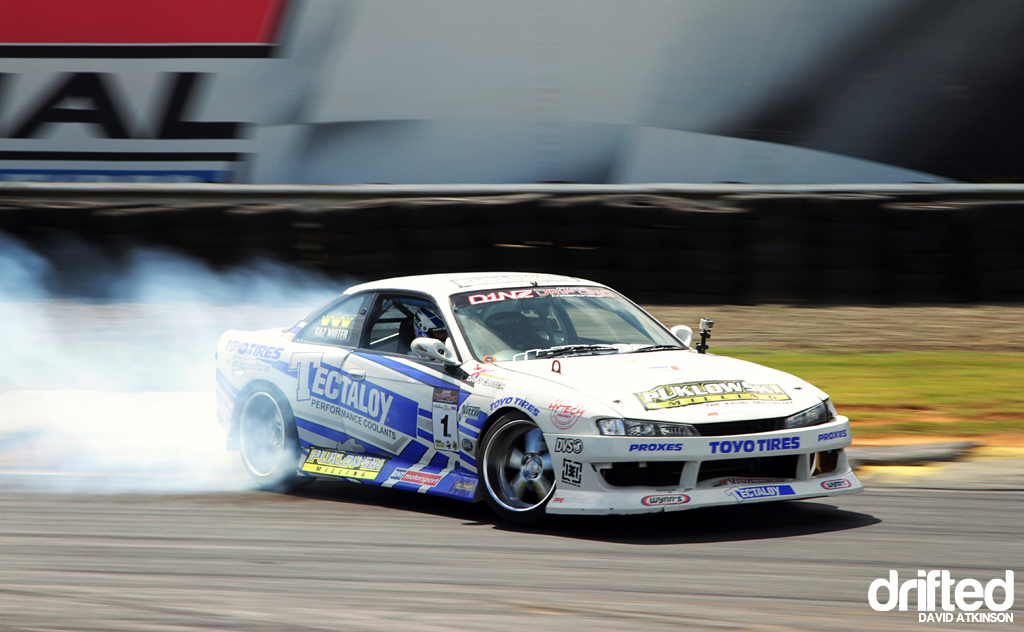 Gaz Whiter and his hard working team were able to repair enough damage from his big crash to compete with Steve Sole and even managed to scrape through with a win. He went on to battle Cole Armstrong for a top four spot but ended up colliding with Cole and bending a rim leaving him unable to continue.

Curt Whittaker in the 2Jz R34 beats Darren Benjamin in the red Laurel to take a spot in the final.

That put Cole Armstrong and Curt Whittaker into one of the most amazing drift finals in recent times. 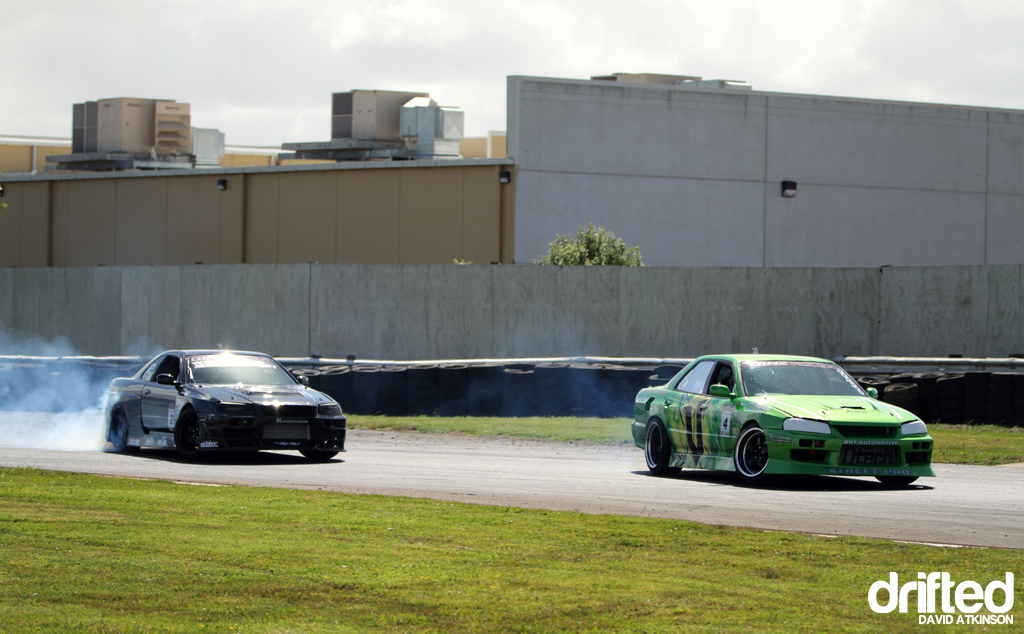 Both drivers were incredible to watch as they powered through the S bends towards the end of the track. 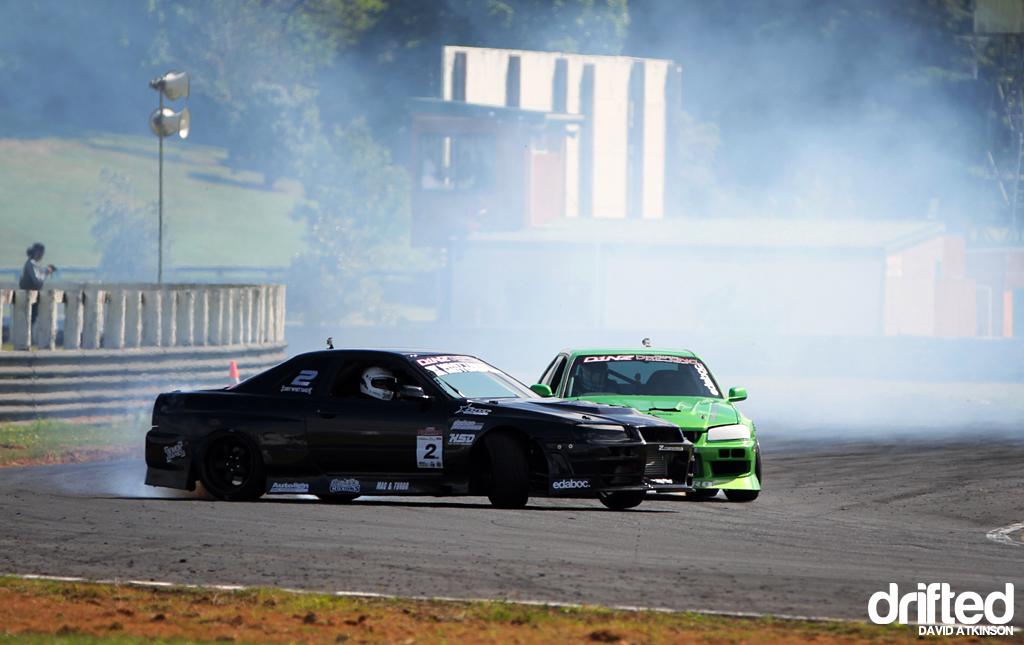 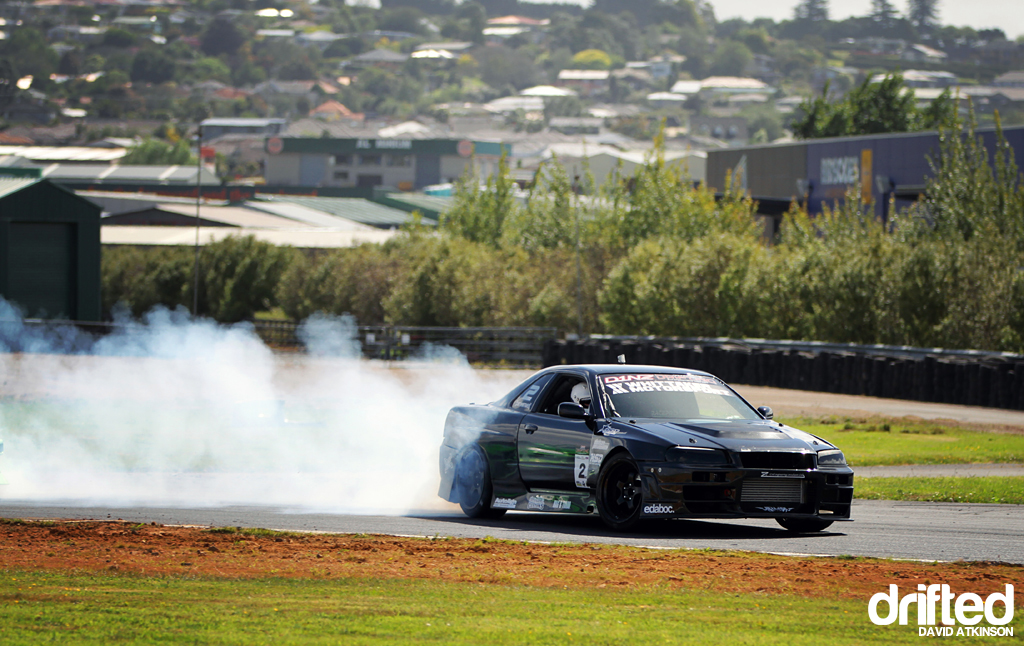 After going OMT another round saw Curt Whittaker with more angle than Cole and he took the Round 2 win. 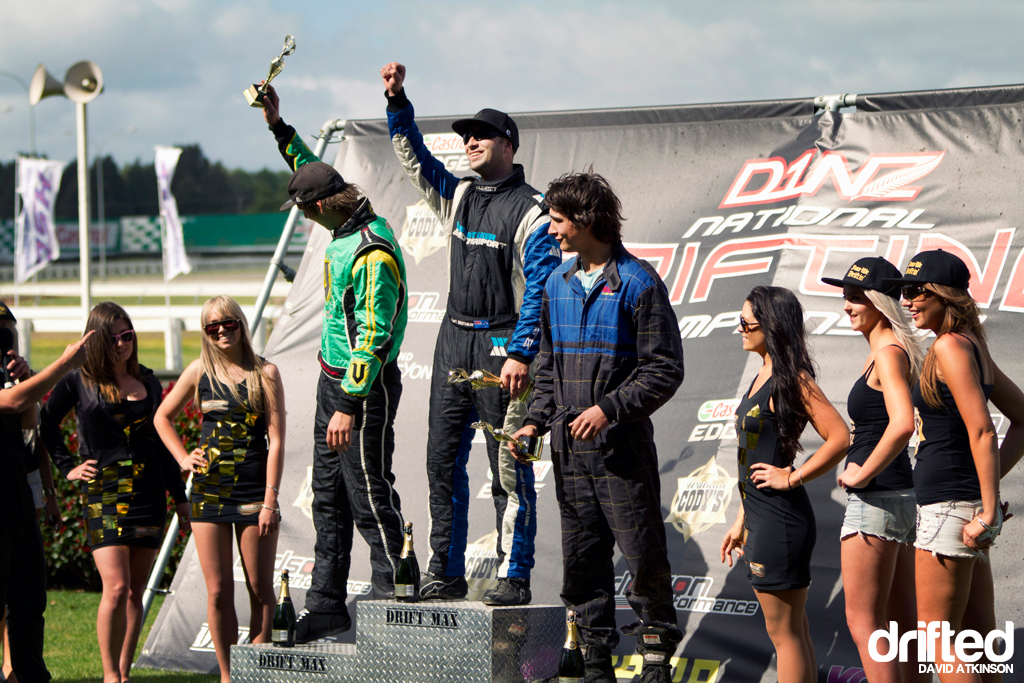 It’s been an awesome weekend here at Pukekohe and I look forward to Round 3 on December 16th and 17th at Taupo Motorsport Park. I’ll leave you with the current points board for the series so far. Watch out for our behind the scenes coverage of Round 2 coming soon. 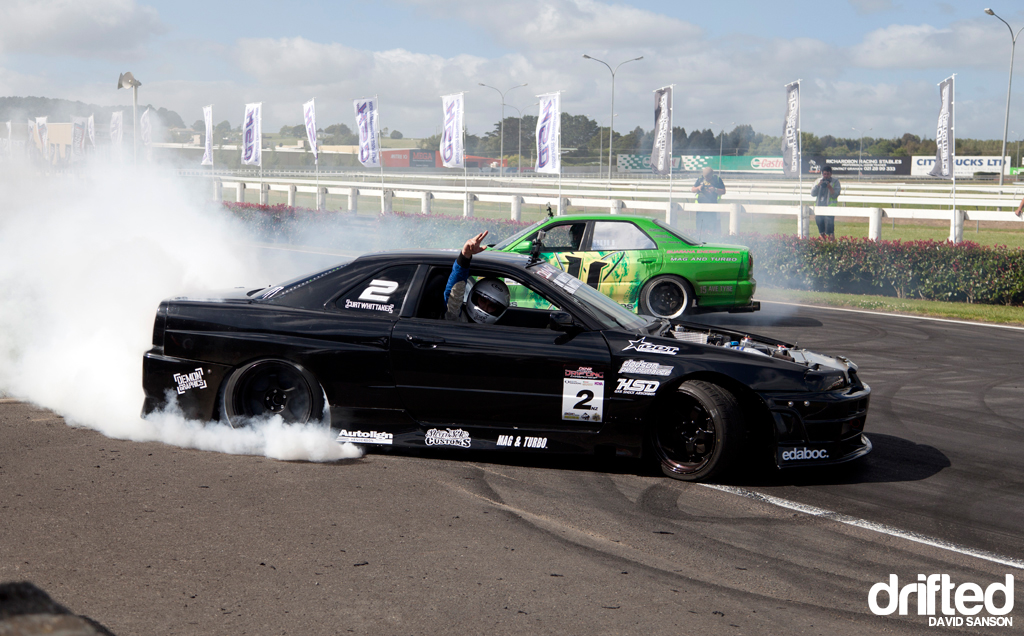 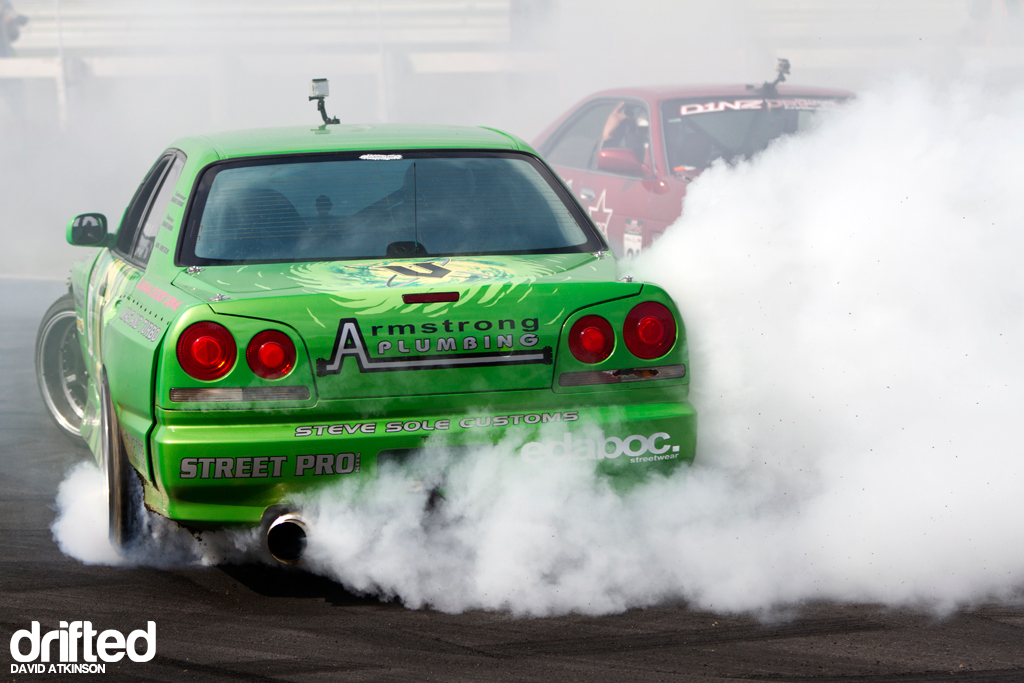