For three years the Nürburgring has played host to the European Drift Championship the first weekend in October, the past years we have seen many known talents, “Fast Kenny” Moen, Driftmonkey Fred Ox, LBD Matt Chiappa, the Falken guys – Remmo, Lars and Lennard.

The expectations for this years edition were big, already a week before, the weather forecast told us that the whole weekend will be sunny and dry, it couldn´t start any better.

When we arrived at the ‘Ring, there where big signs guiding us to the Mülenbachschleife, the part of the Grand Prix track, were Team Falken did their show at the N24 race in June. The pit, a dusty place between tribunes and track has a very unique feeling, after two weeks of sun (which never happend before in the Eifel region) the pitlane was dusty and reminded me on a western city shortly before “highnoon”: 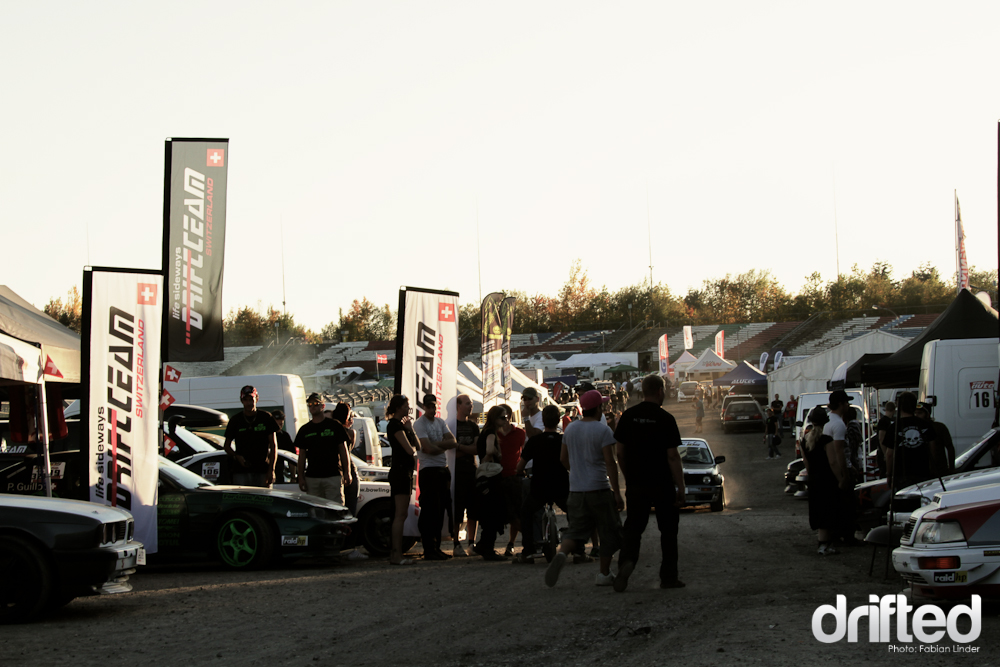 The pitlane – seems that flags are a “must have” item of every driftteam. The Driftteam Switzerland showed up with all of their drivers, even their master Michu Sahli was around. 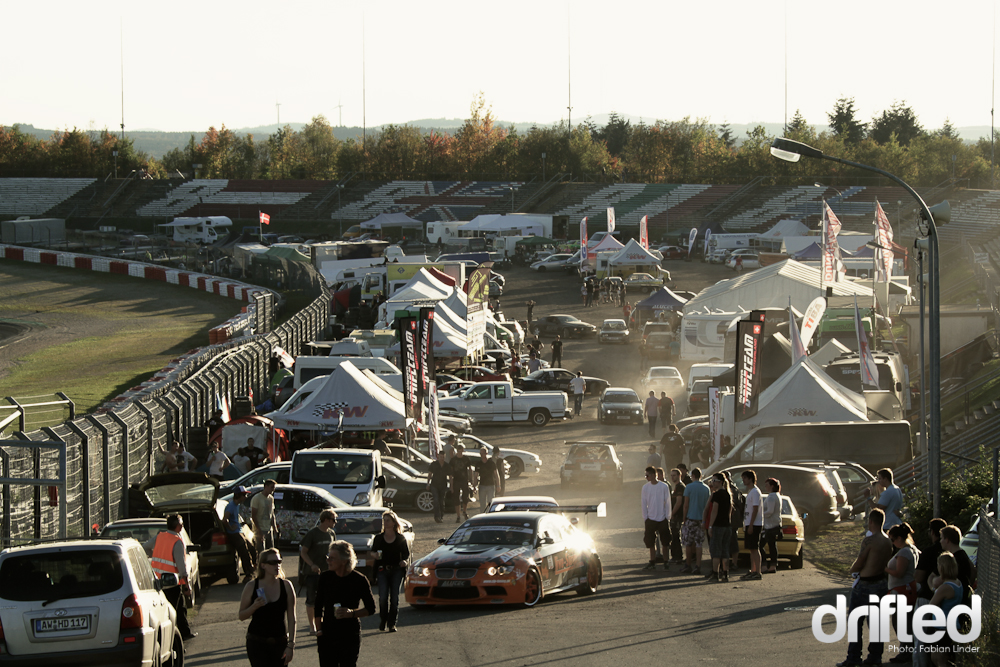 It may look somekind of unproffessional, but I prefer the gravel in the pit, I love the sun sending some last rays through the dust. 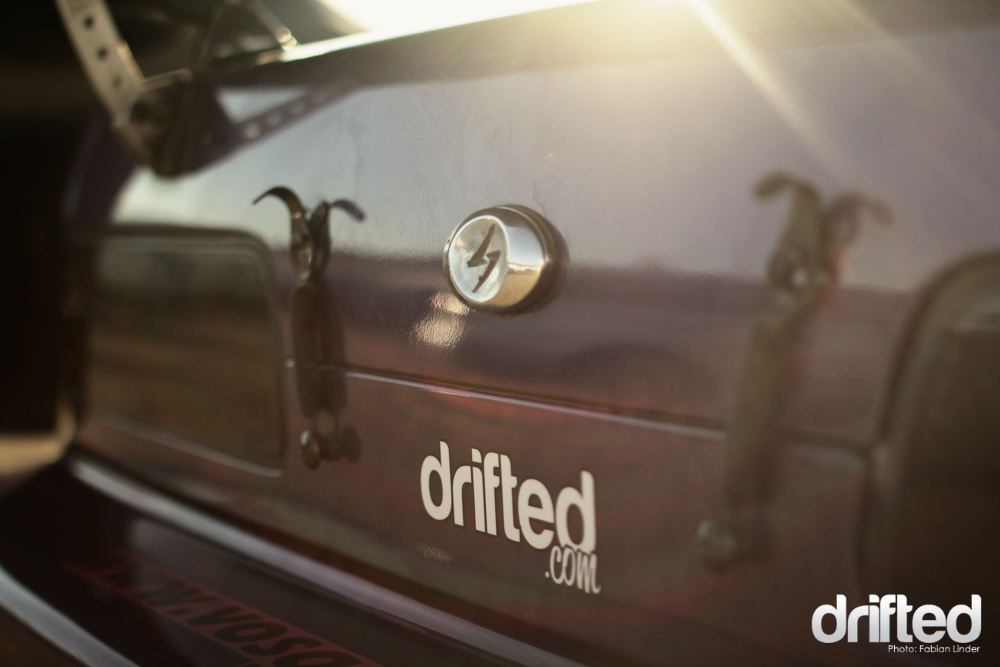 Thanks to our media partnership with the IDS, there where Drifted stickers on every car. Normally the drivers don´t want too many stickers on their car, but this time everyone kept asking if I have some more for them, we love you too guys!

The starter field was filled with many great drivers, such as the French champion Benjamin Boulbi with his roaring E36 V8.

Almost too clean for drifting: the Czech kr-driftteam brought a nice R33 with a 600hp RB26DET, sadly the team had some technical issues.

After a short briefing in the morning, the training could begin, as always the Scandinavians were the first ones on the track. 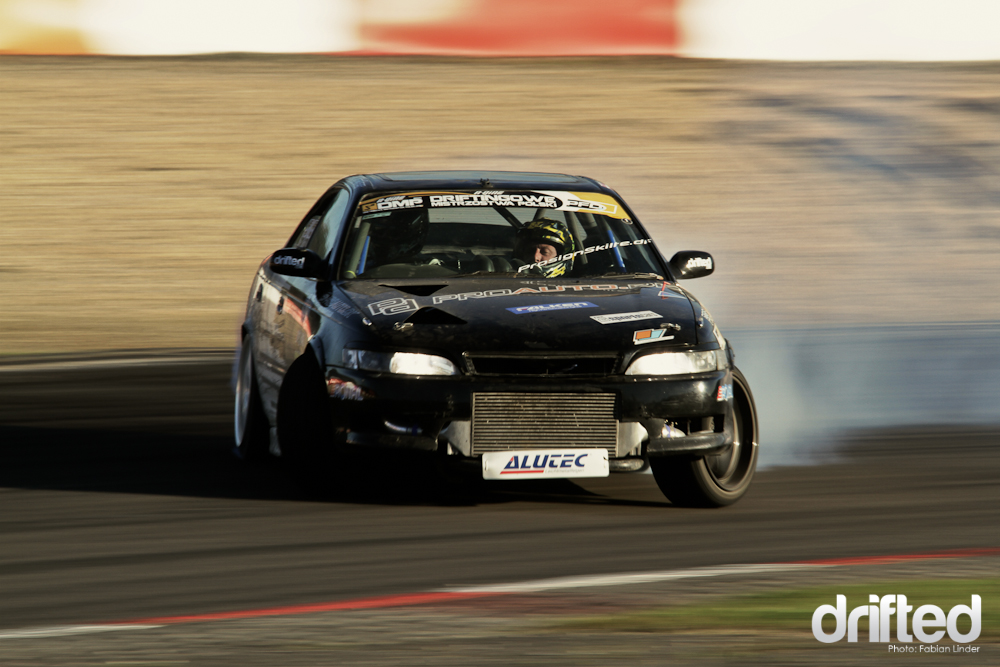 Niels Becker from the Proauto/Falken Driftteam pushed his Chaser on the edge, he’s a really skilled driver and for sure he was one of the fastest on the track. 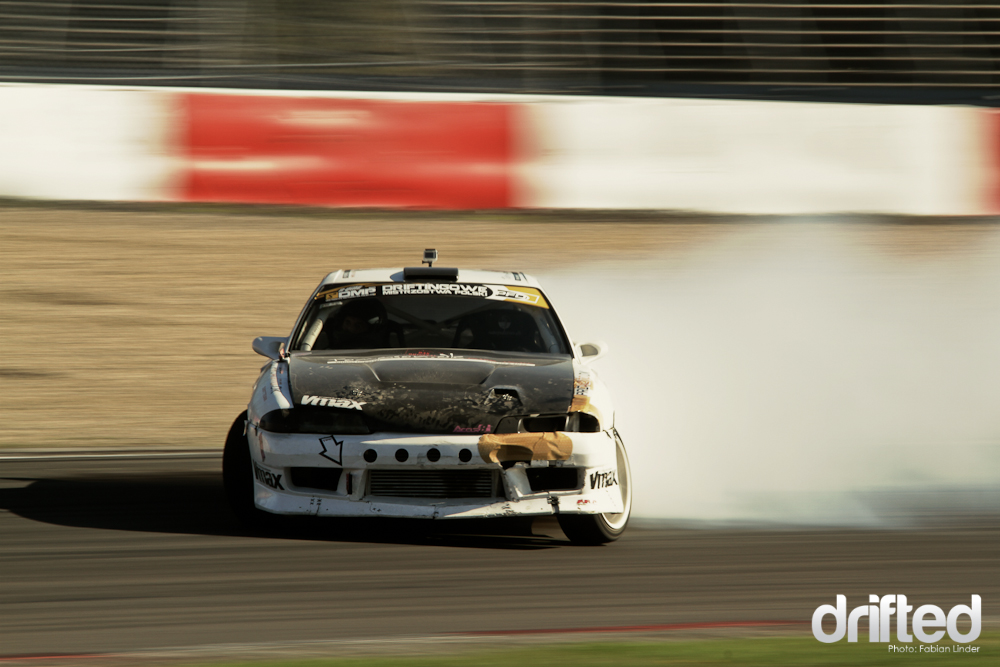 His mate Martin “Pyramide” Poorhamidi struggled with the RB20 and the tires, even though his car was the most smoking one. The scars and dents were from the touge drift event in Poland last month, this weekend he tried to stay on the track. 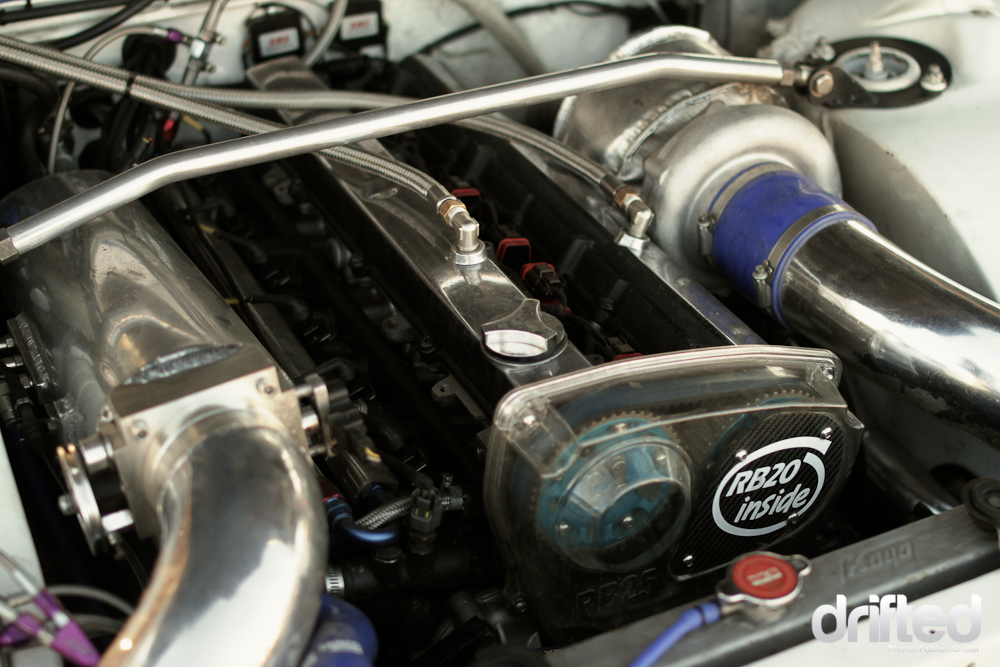 The secret of Martin´s smoke: A freshly rebuilt RB20 with a nice turbo. 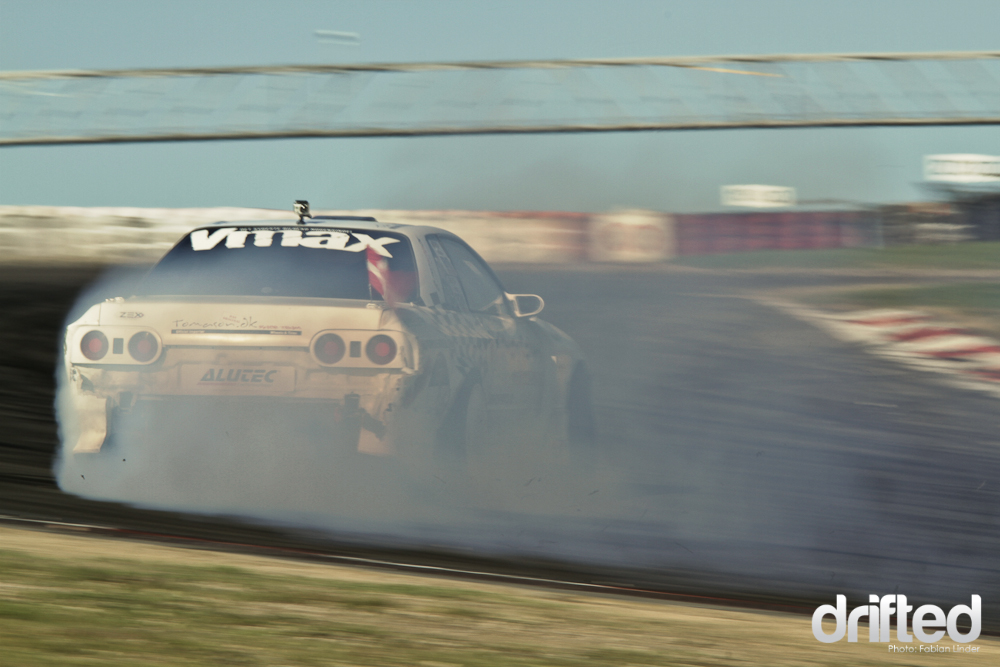 Vmax! Formula D driver Kenneth “Fast Kenny” Moen recently mentioned that this track was the fastest he has ever been.

Another nice Nissan project: Todor Dunev from Bulgaria stopped at the ‘Ring, he participated this year in the KoE series and Drift Allstars. His S13 is still bangin a CA18 but with many goodies and Nitrous. 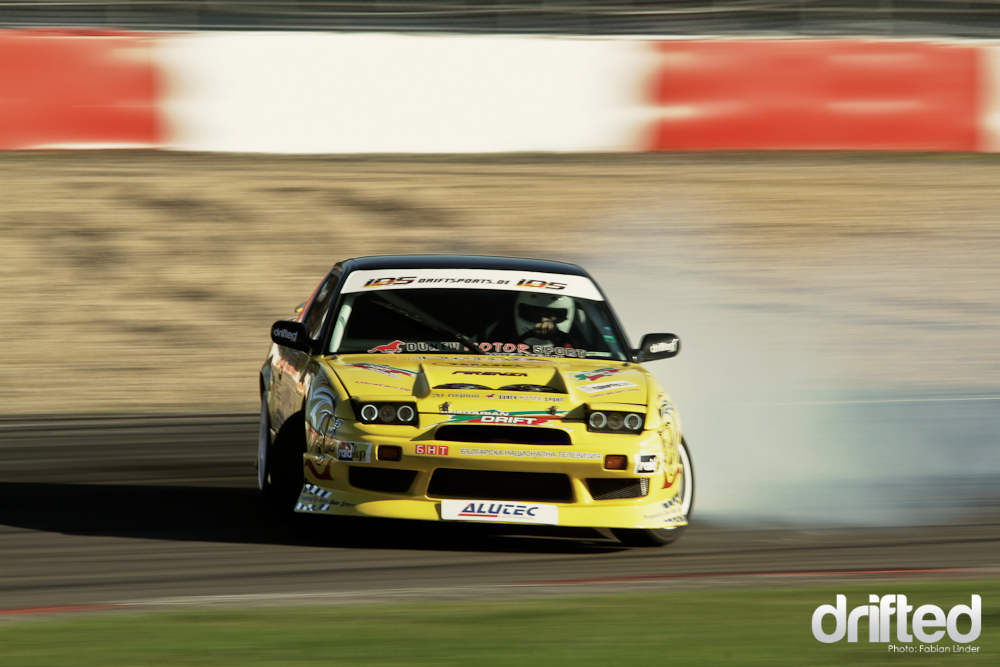 Its great to have a bodykit supplier as sponsor, Todor has no need of zipties and tape at all! 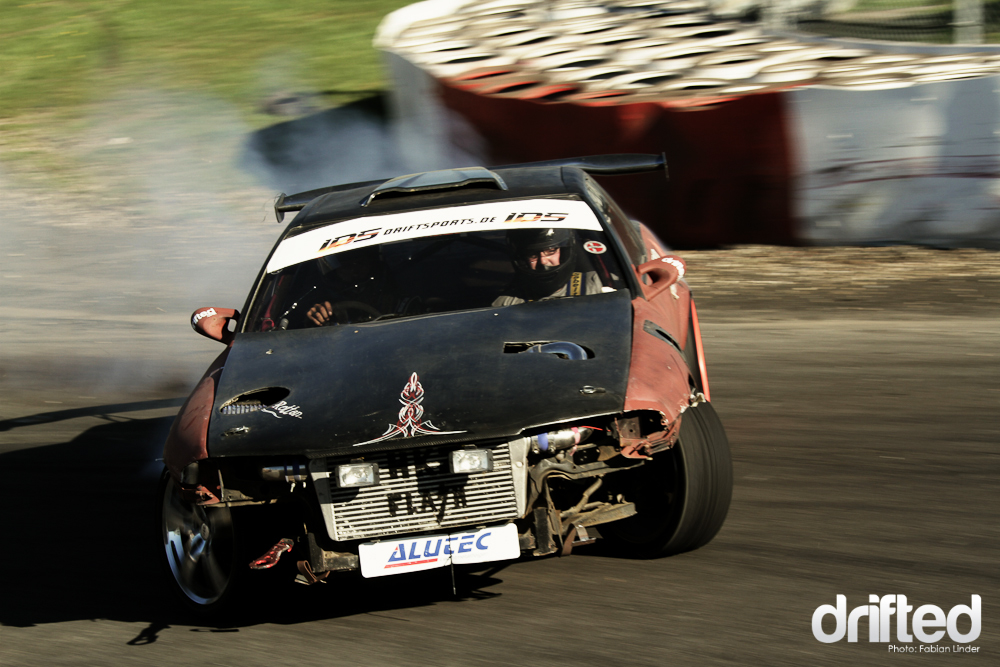 Rat rod!?!? This Danish R32 was painted flat brown and had some nice pinstripings all over the car. Beeing different means beeing cool! 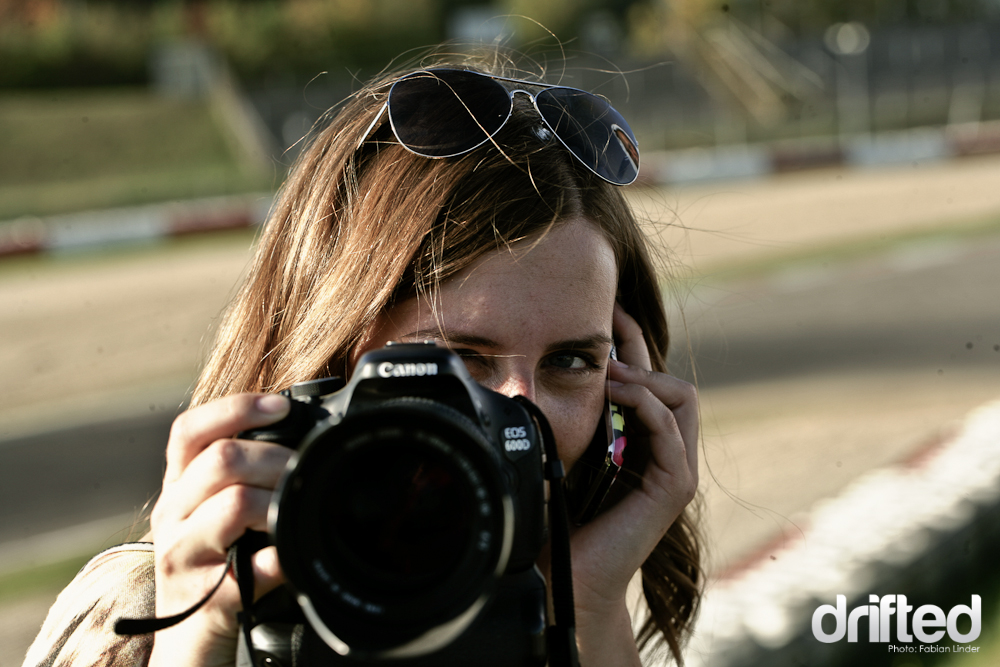 Evidence: Women are capable of multitasking. 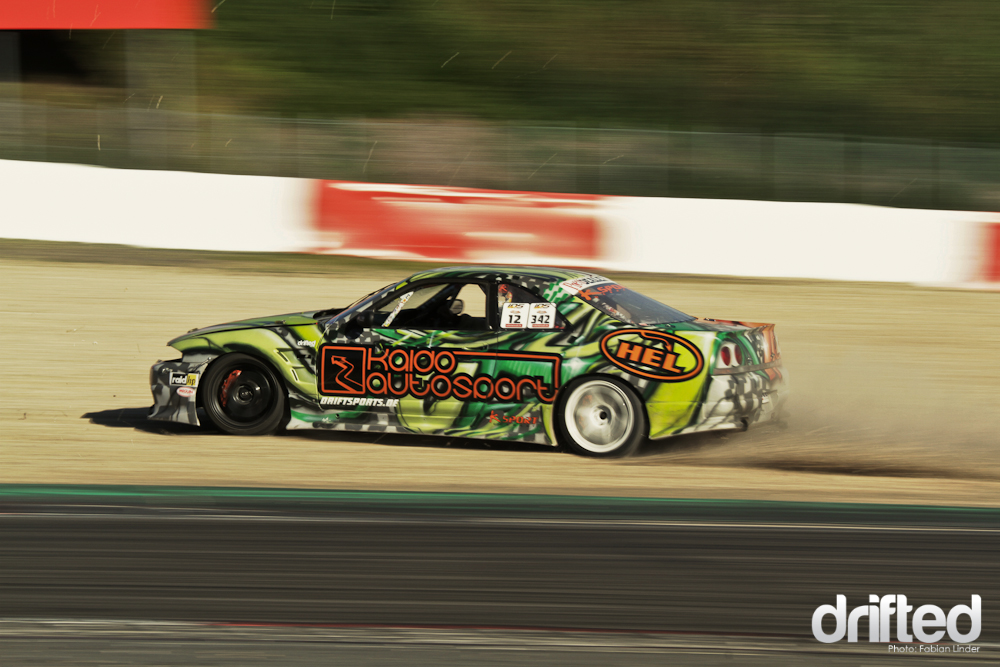 Marcel Uhlig from Germany was for sure the fastest man on the gravel, maybe he wants to partcipate in WRC 2012? 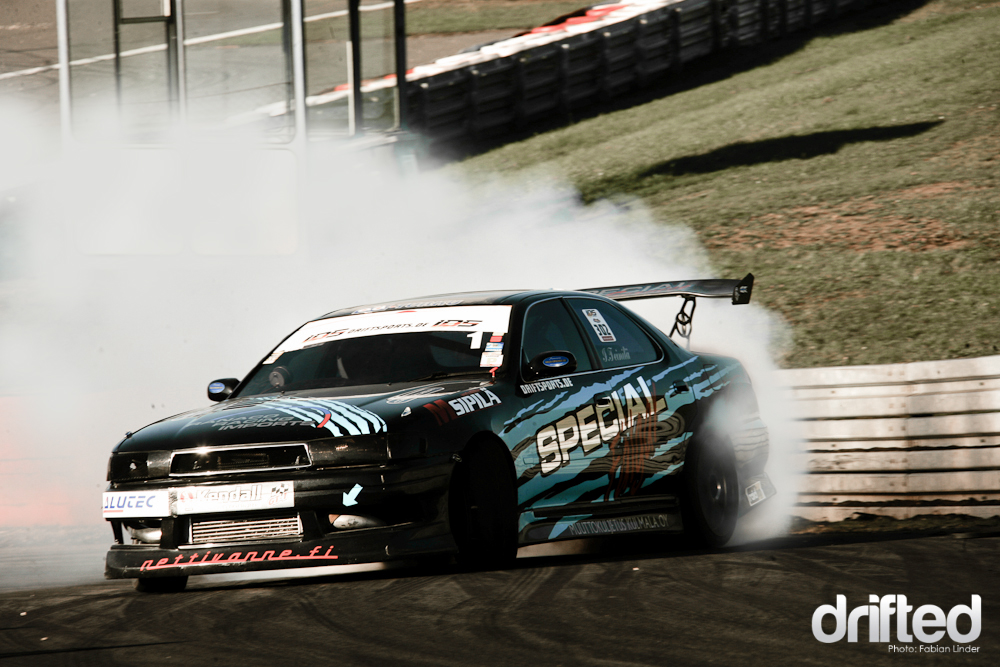 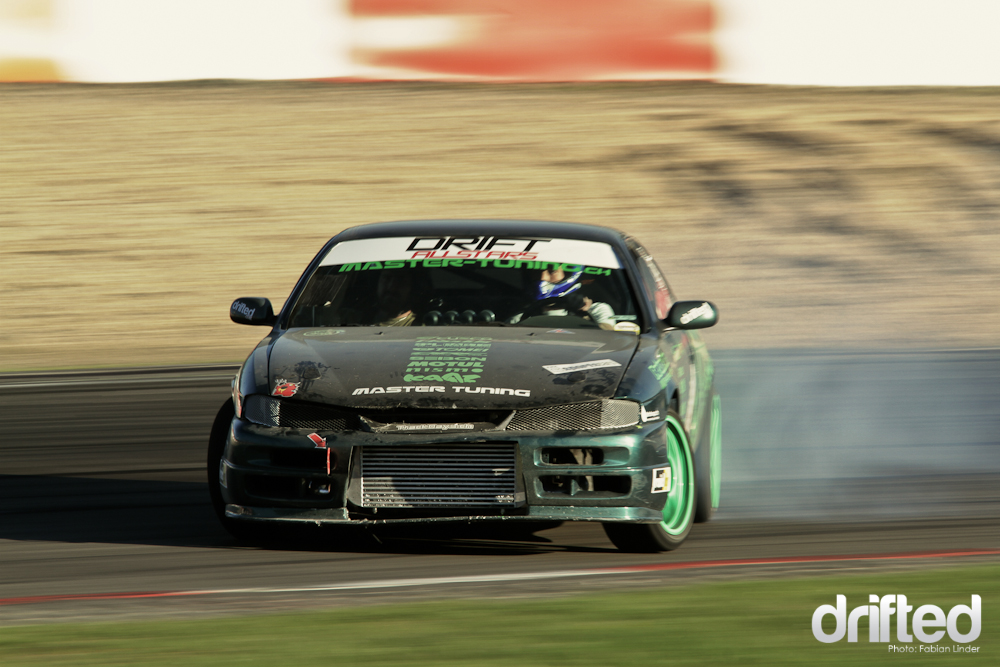 Swiss driver Philippe “Dirtdrop Phil” Guillod was a bit unconcentrated through the whole weekend, so he sadly didn´t made it into the Top 16. 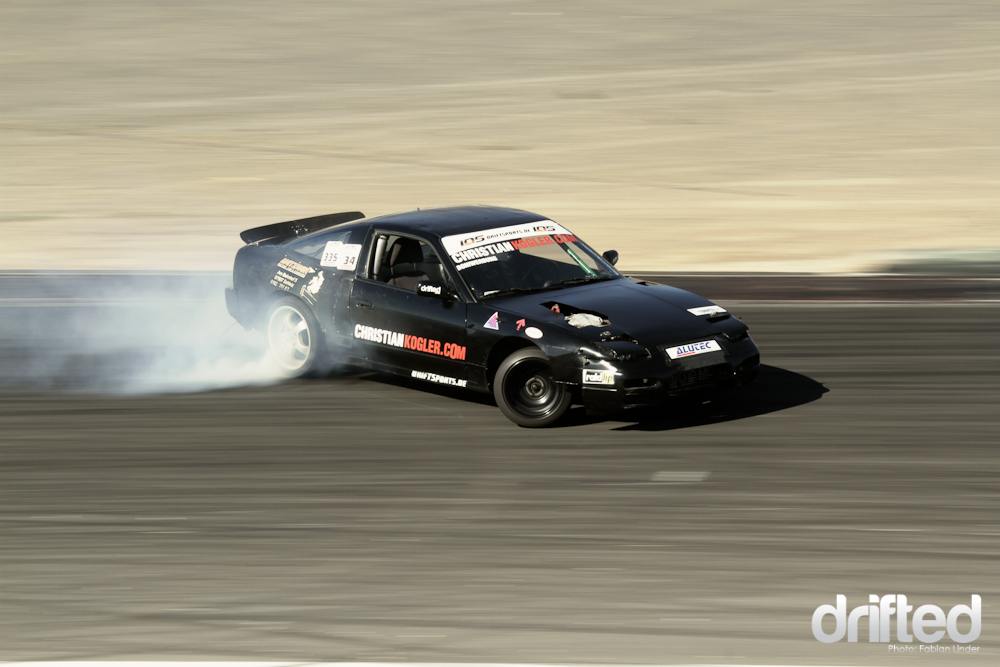 Another unsung hero of the weekend: Christian Kögler had also chances to win the IDS Championship, but he ended up in Top 16 too.

Even the fresh can of Rockstar couldn´t make Chris happy again. After Michael Scherr and his 300ZX had to give up, he was just a few steps away from the win, but failed on the last inches.

Another good friend of mine: Benjamin Boulbi, the French champion – he and his chief mechanic/Dad are doing every drift event possible.

Oooops! Benjamin wanted too much and tried the WRC style. 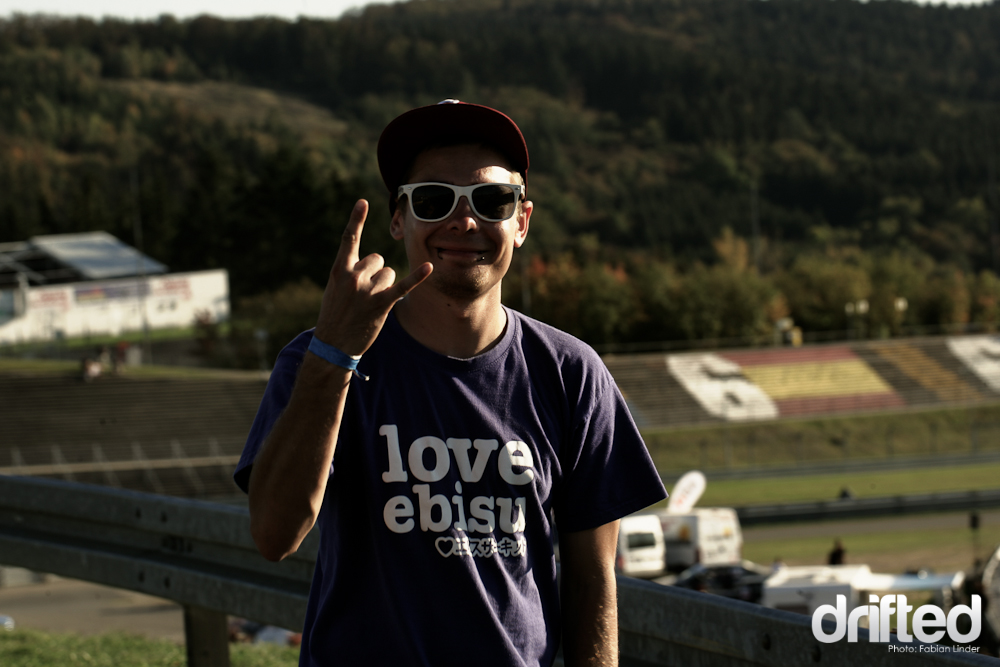 Our Judge Faruk brought Chris and Vera from UK. Chris wears his glasses to cover the bloodshot eyes after sniffing all the rubber 😉 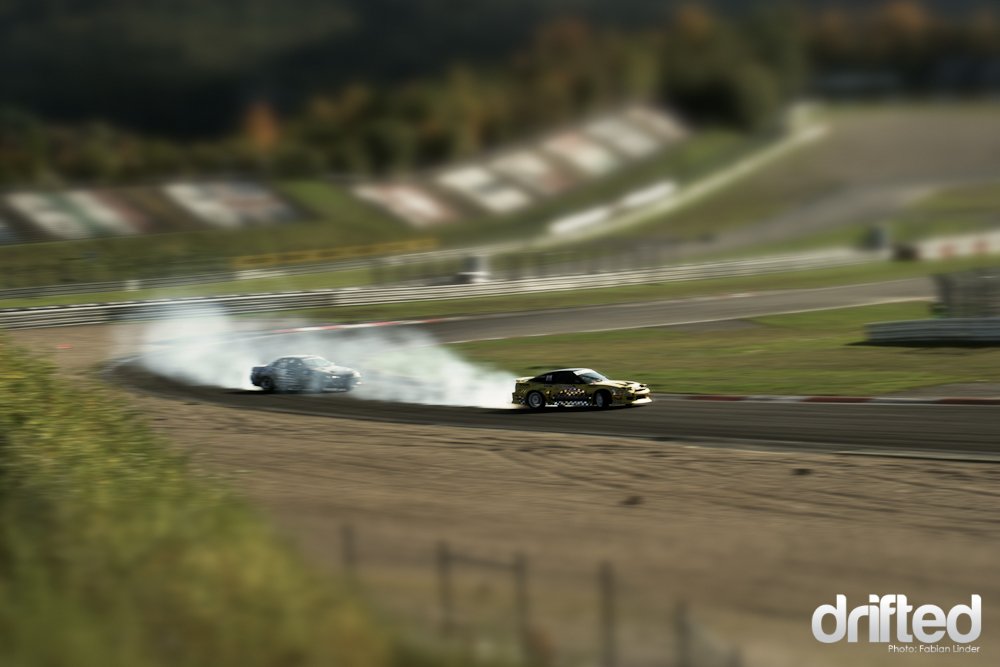 The extremely fast Schumacher S turn uphill – the fast drivers do this in fourth gear at over 100mph, very fast drivers reach 120 mph.

Another cool Danish car: A S13 with exhaust through the fender. 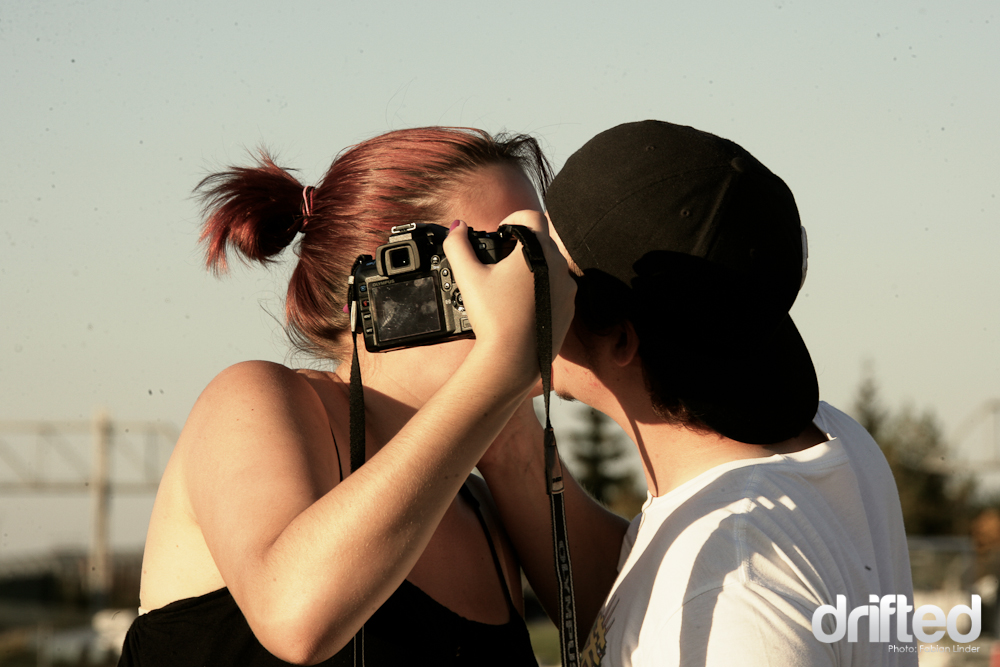 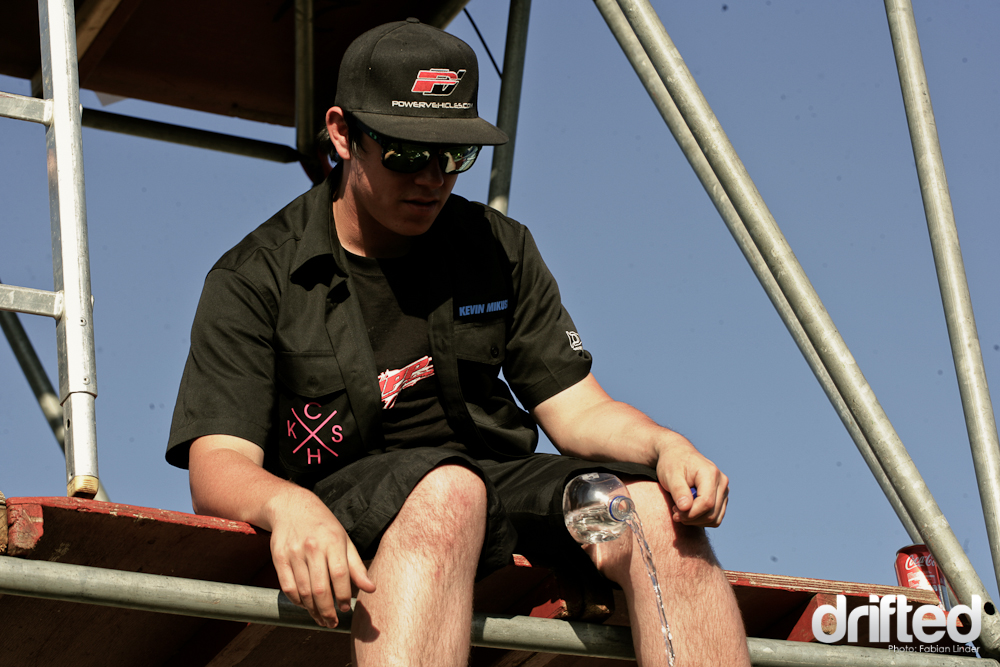 Meanwhile, Kevin Mikusch CEO of the Luke Fink Fanclub Germany and member of Team “Clutchkillers” suffered in the sun. 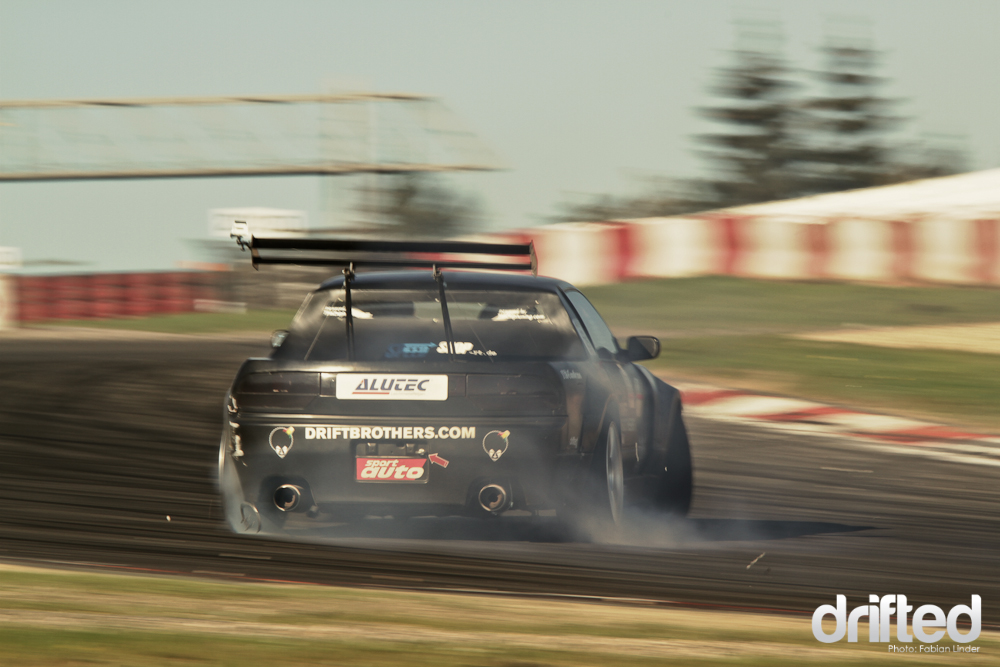 Joe Houndtounji´s S13 V8 Pick up was back on the track – next year it will be lighter and more powerful, so he will be able to fight for the championship.

Already famous: The swiss drifter Sascha Manz is already known by his Youtube videos, he is the driftking of the Nordschleife. 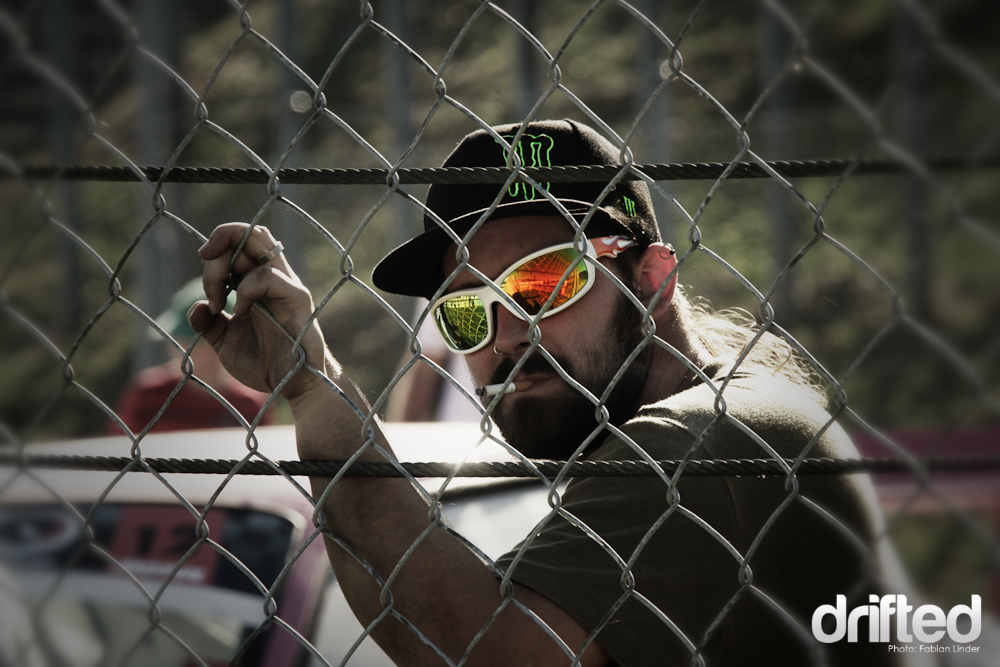 If I would have to sponsor a driver, I would sponsor Michu, because hes so damn cool! 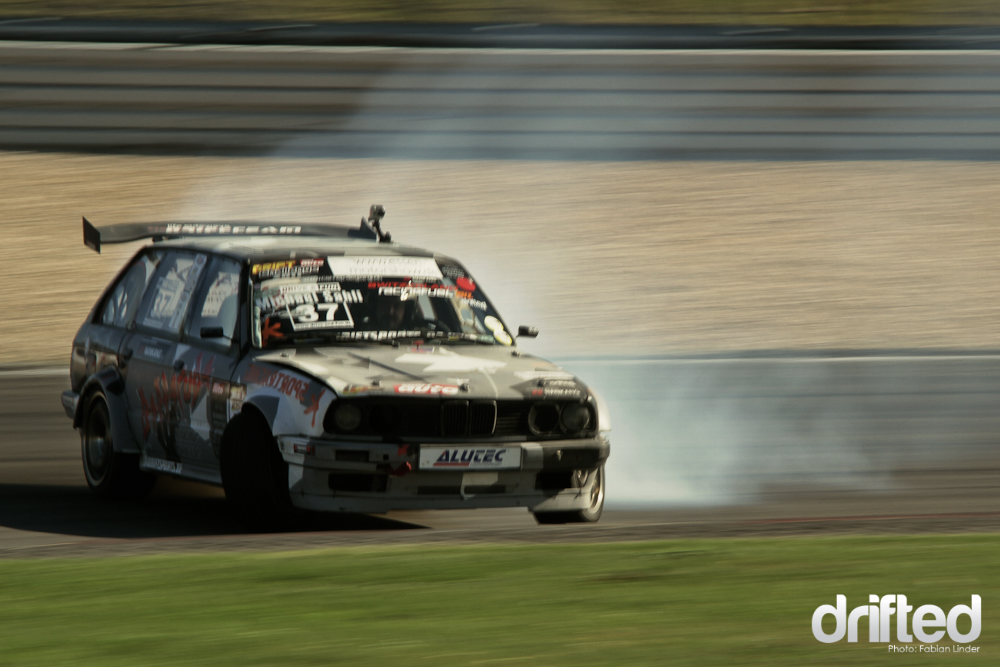 Michu Sahli is definitely one of the best drivers in mainland europe, his E30 grocery getter will be soon be replaced with one of the dopest projects ever.

This year he only competed in the main three events: The European Championship, Drift Allstars in France and the Driftchallenge in Hockenheim, when his new project has reached 100% he will be back in action. 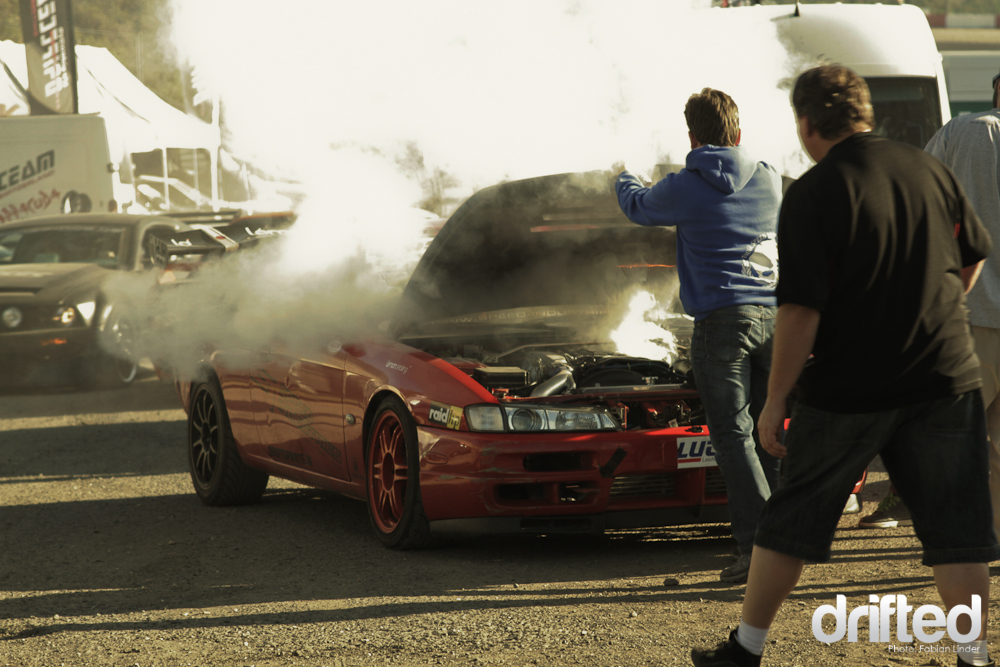 And another unlucky driver: Andrew from team Speed indutstries lost a oil tube while exiting the track, luckily there were enough fire extinguishers around. 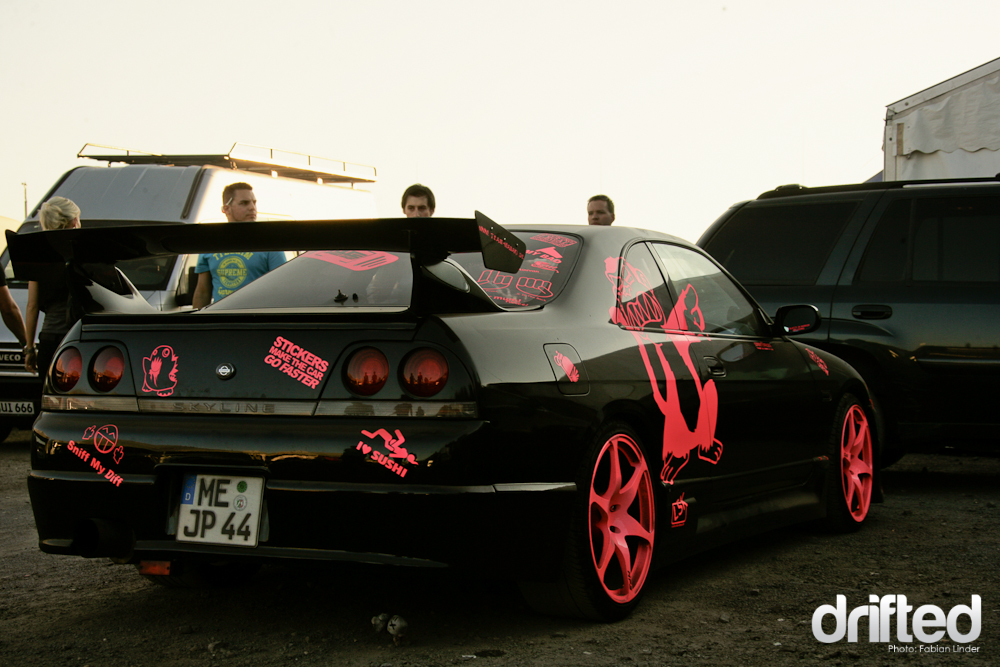 On the parking there were some cool cars, I like the “evil monkey” on the side of this R33

In the evening, we were at dinner with Faruk, 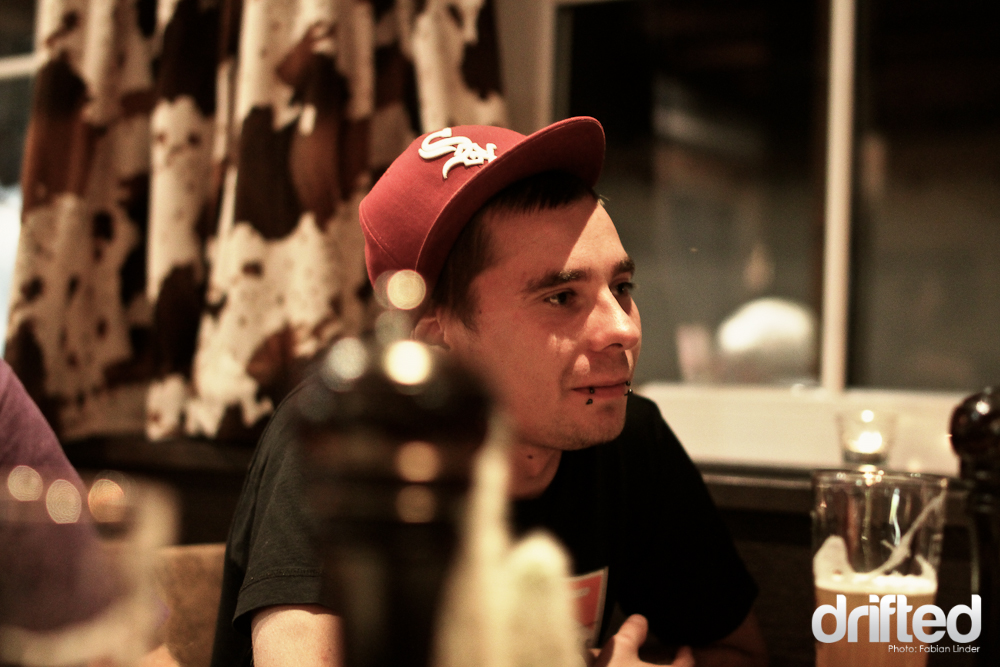 Part II coming soon…… the twin battles and the finals of the IDS Pro class and the European Championship.

« SNAPSHOT: An Assault on Mind, Man and Machine
Yellow but not Mellow AE86 »