Months of preparation and planning, countless hours spent spilling blood and sweat on workshop floors around Europe. This is what it all boils down to. This moment. The final round of the 2014 Extreme Drift Allstars season.

Hours that should have been dedicated to sleeping spent driving across countries and continents. 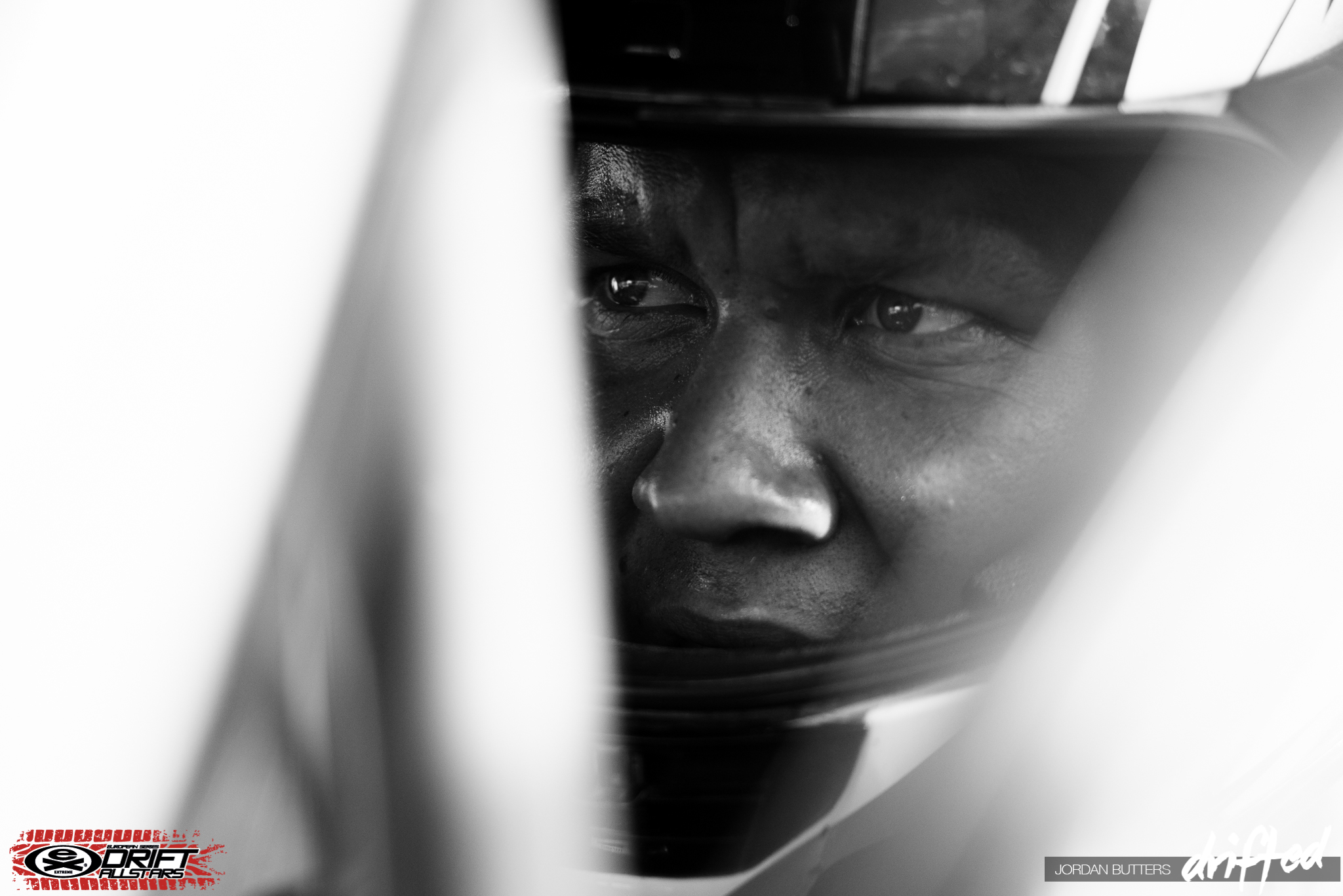 Yet at this point it all seems worth while.

Judgement day arrives, and the title is still up for grabs.

It’s down to the wire, and the streets of Kaunas, Lithuania will bear witness to the final reshuffle of the standings tables. 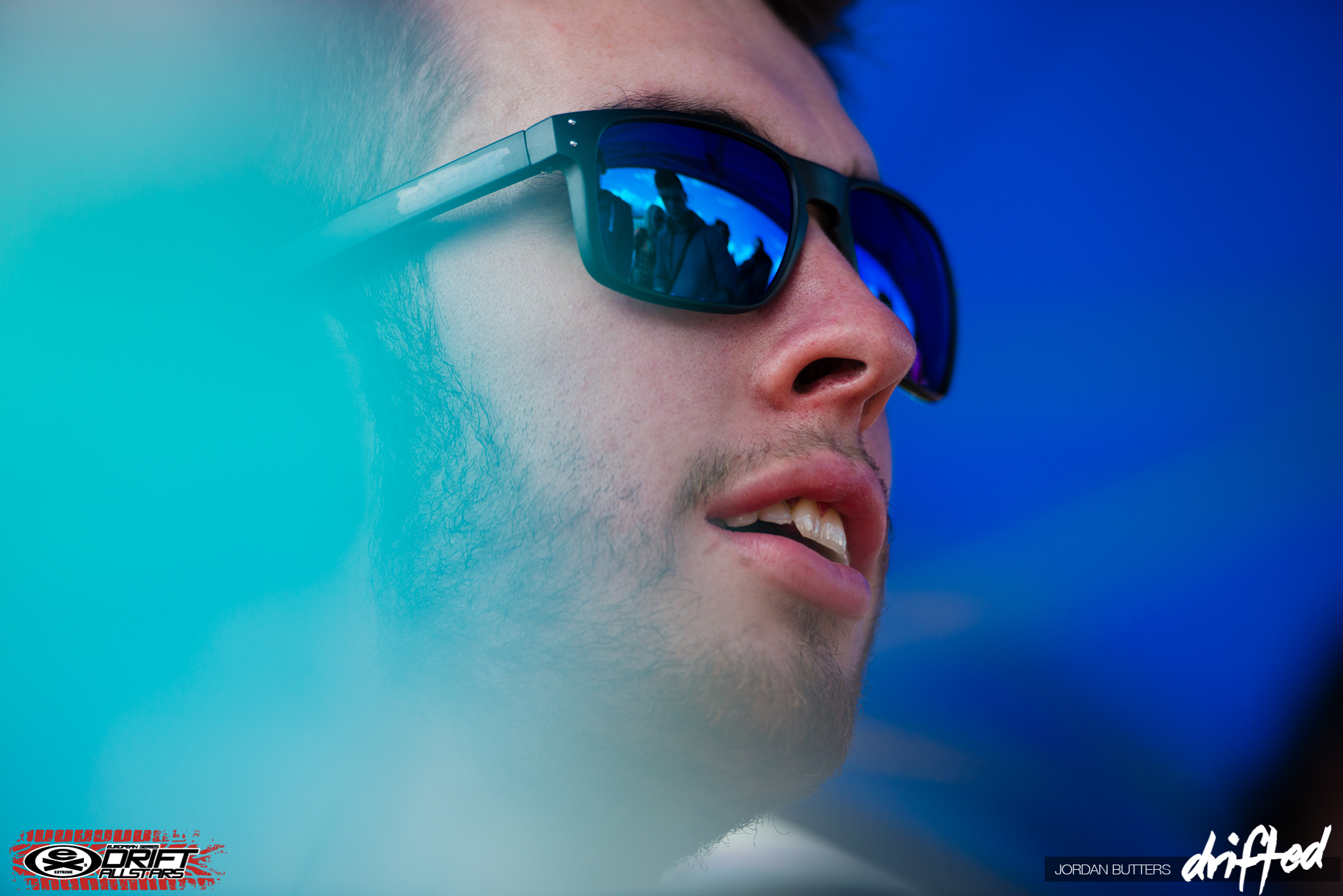 Falken Motorsports driver James Deane has it all to lose. Sitting at the top of the table, with second qualifying position in his back pocket, he must make it as far into the competition as he can to secure the title. All the while shooting a sideways glance…

…at Budmat Auto’s Piotr Wiecek. The Polish driver snatched top qualifying spot the day before, and is nipping at James’s heels in the race for the title. 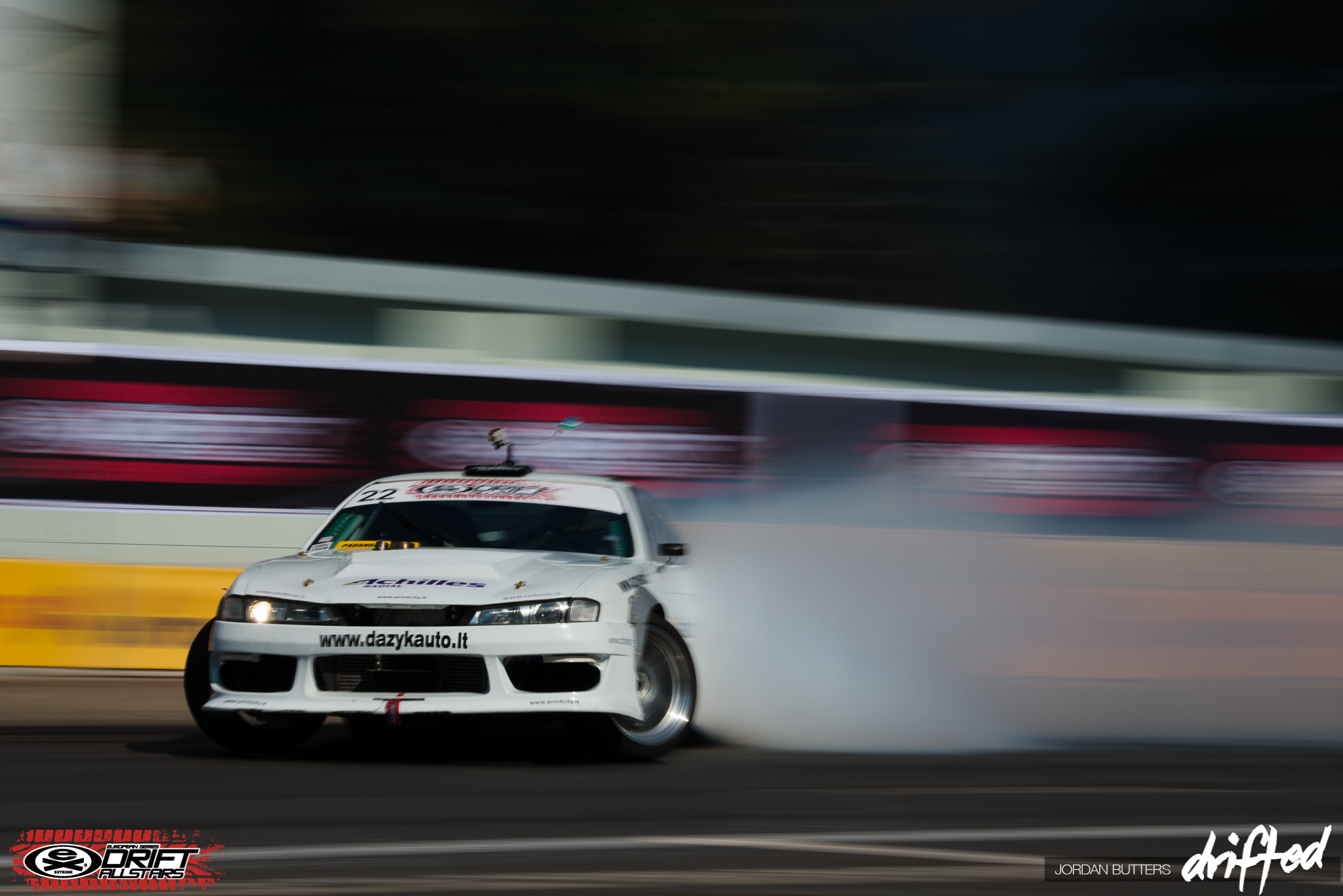 In the mix are a host of other regular Drift Allstars drivers looking to end the year on a high and, in the process, upset the balance.

And to further confuse matters there are local drivers through to the Top 32 as well. Their motives are clear - put on a good show and get the supportive home crowd behind them.

Lithuanians love motorsport, especially drifting. Their passion is unfaltering and they are incredibly vocal about it.

Coming from the UK, where it’s a struggle to rustle anything more than a murmur from the crowd, no matter what the occasion, it’s a breathe of fresh air to stand in front of an audience who care about what happens.

Unforgiving concrete walls and high kerbs stand to attention, lining the circuit. Getting close is the name of the game if you want to be on the right line to navigate the course successfully.

Of course during tandems the risk factor is doubled.

Where one car goes the other must follow, and tracking through a thick fog of spent rubber you’ve got to have the ultimate faith in the driver in front. When it’s your turn to lead, you set the pace. However you know full well that when there’s a 1300kg 600+bhp block of metal flying alongside you, trying to get as close as possible, you need to bring your A-game. 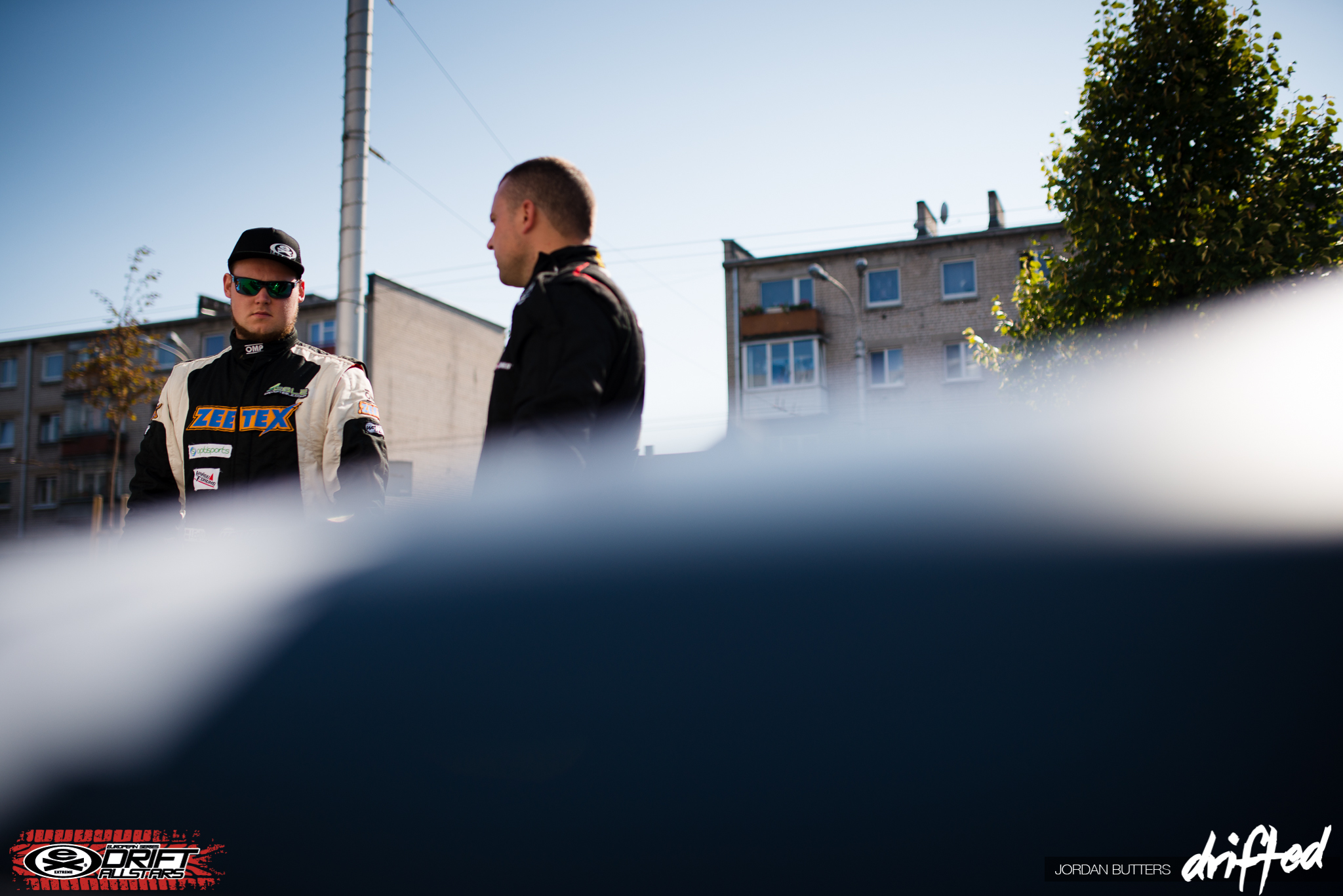 Drifting, more than any other motorsport is about trust.

As the top 32 introductions come to a conclusion, the final line up is whittled down and we’re on the home straight.

Timas Simniska in the Soarer eliminates Povilas Lencevicius. The light BMW Z3 of Lencevicius unable to scrub off speed and making contact with the barrier on his chase run.

Ingus Jekabson in the 5-series would send Fredrik Sjodin packing back to Sweden.

Deane would beat Harold Valdma in the Top 16…

…before making light work of Ingus Jekabsons in the Top 8. Frantic calculations are underway in the judges’ tower. James Deane is still in the running, but so is contender Piotr Wiecek. Has the Irishman done enough?

…and then leaves local Lithuanian driver Andrius Čibirka of Team Promsksa in his wake to go on to meet Janis Eglite in the other Semi Final. 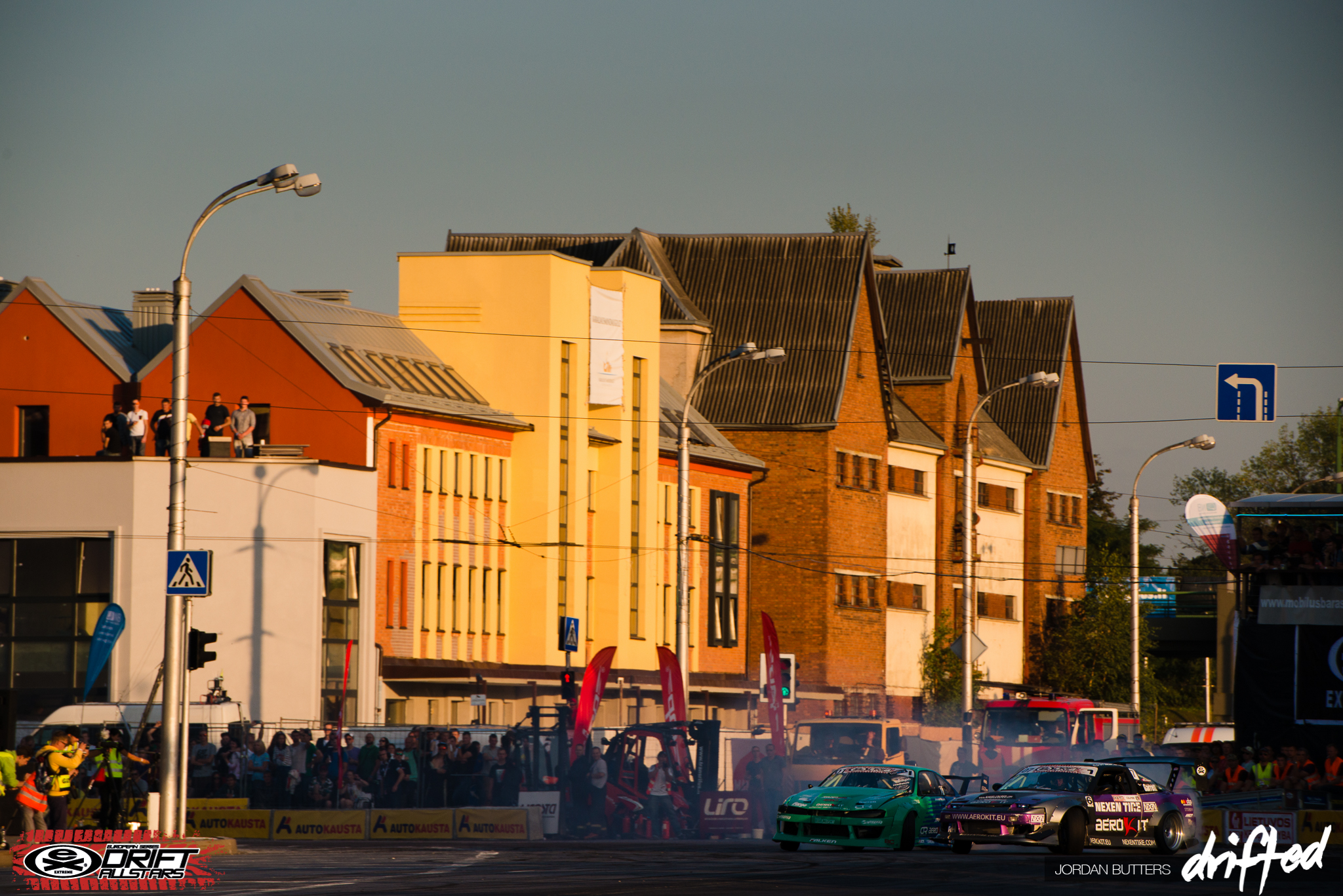 This duo have driven together on many occasions, so you know it’s going to be a good, clean, close battle. 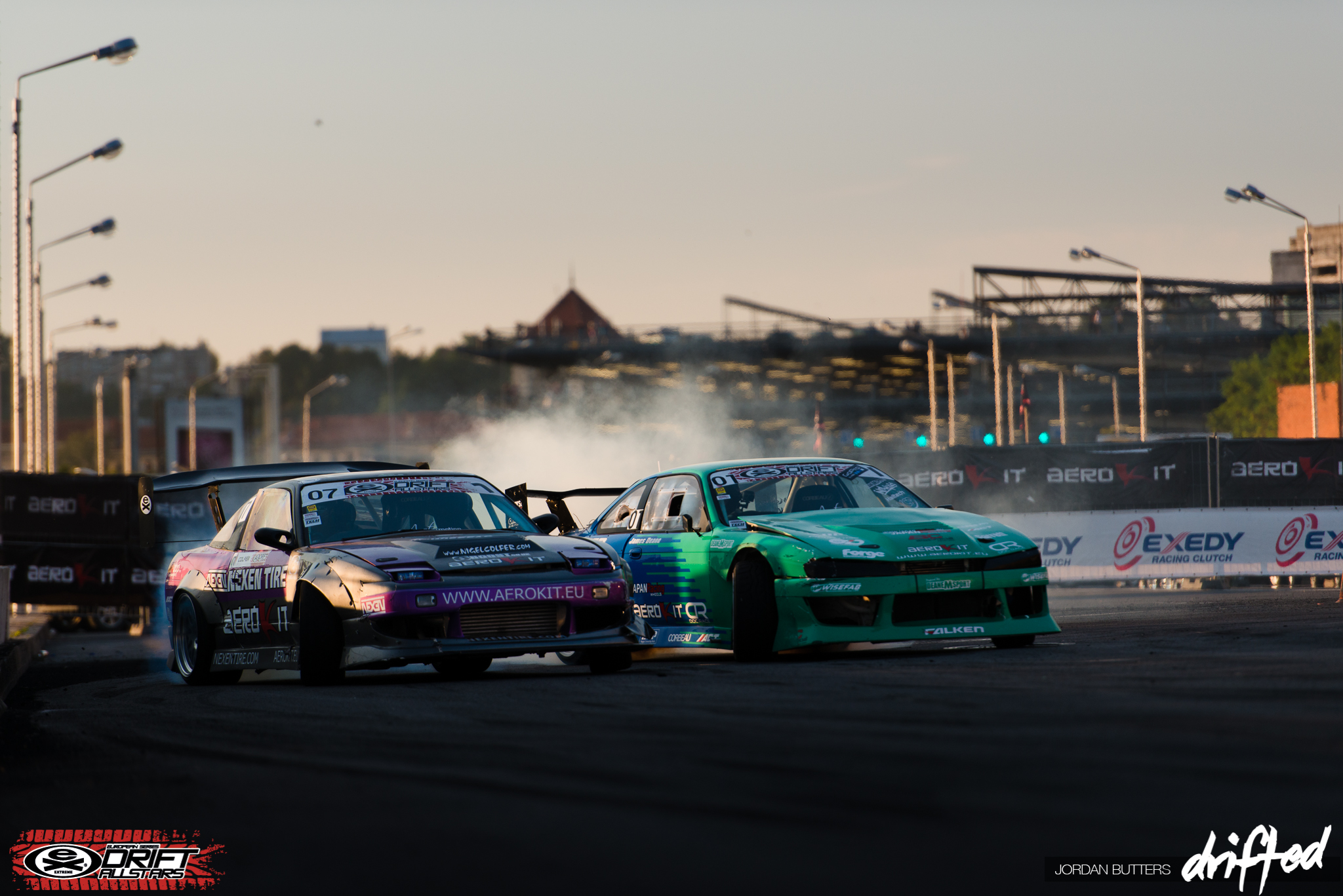 As they round the final corner it’s door on door, with Deane doing enough in the judges eyes to take him through to the Final.

In the other Semi, Wiecek faces Janis Eglite. This is a battle that you simply couldn’t call. 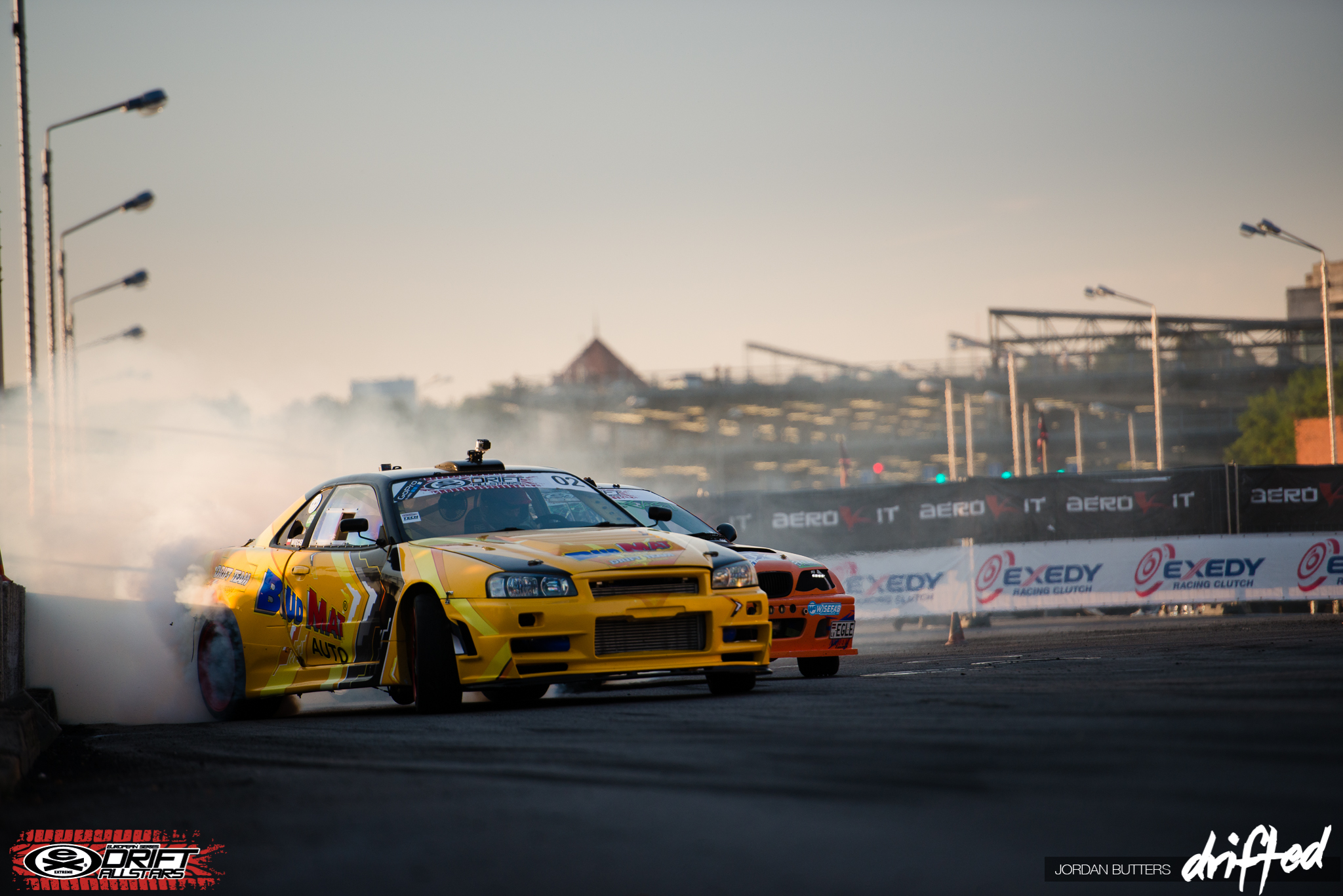 Wiecek leads well, but Eglite is on his rear quarter come the final bend.

As they switch around Wiecek sticks to the E46 like glue. Eglite simply can’t shake him. Wiecek is named the victor.

Colfer and Eglite do battle for the bottom step of the podium.

After two runs the judges can’t separate the two. It goes to One More Time.

This time Colfer attacks the course, pulling a gap on Eglite and securing the victory.

As the smoke settles just two drivers remain. The crowd are eager to see a new champion.

In a fitting end to an amazing season the only two contenders left on track are the two drivers at the top of the standings; Falken Motorsport’s James Deane and Budmat AUTO’s Piotr Wiecek. James now realises what we’ve known on the sidelines for the last couple of battles - he’s already done enough to win the season title. Beating Wiecek now is just for fun. 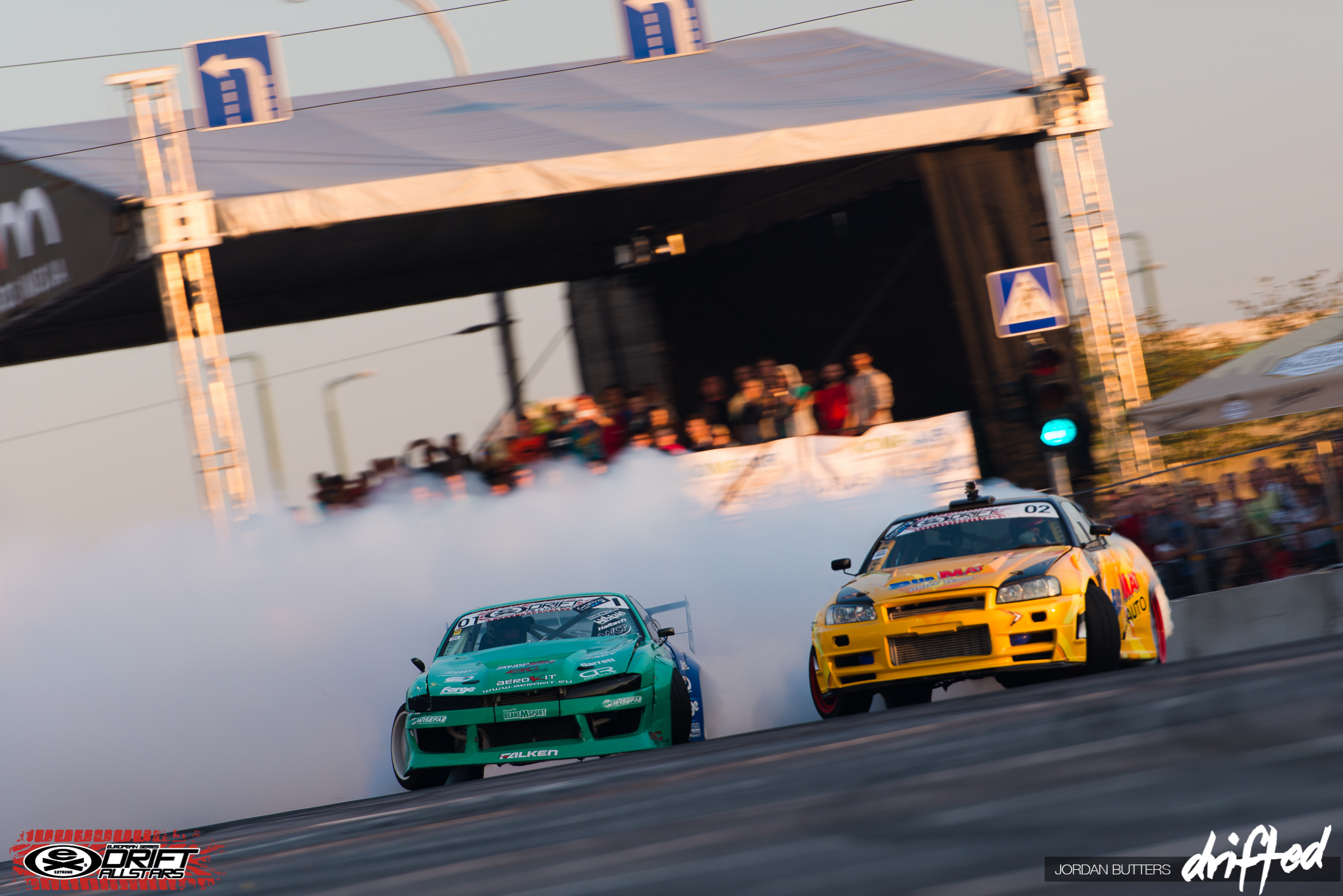 As the bright yellow R34 of Wiecek bursts into view on the penultimate bend it first looks as if he’s lost the Falken driver in his wake. Suddenly, the bright teal front end of Deane’s S14 lunges forward out of the smoke and he’s right on Wiecek’s bumper.

Sun setting in the background, thousands look on, both in attendance or via the livestream online. Deane pushes Wiecek around the final hairpin.

They switch places and Deane is flying. Wiecek can’t keep up.

The judges have made their decision. The people of Kaunas has been treated to a spectacle and a fitting end to an incredible year for Extreme Drift Allstars. 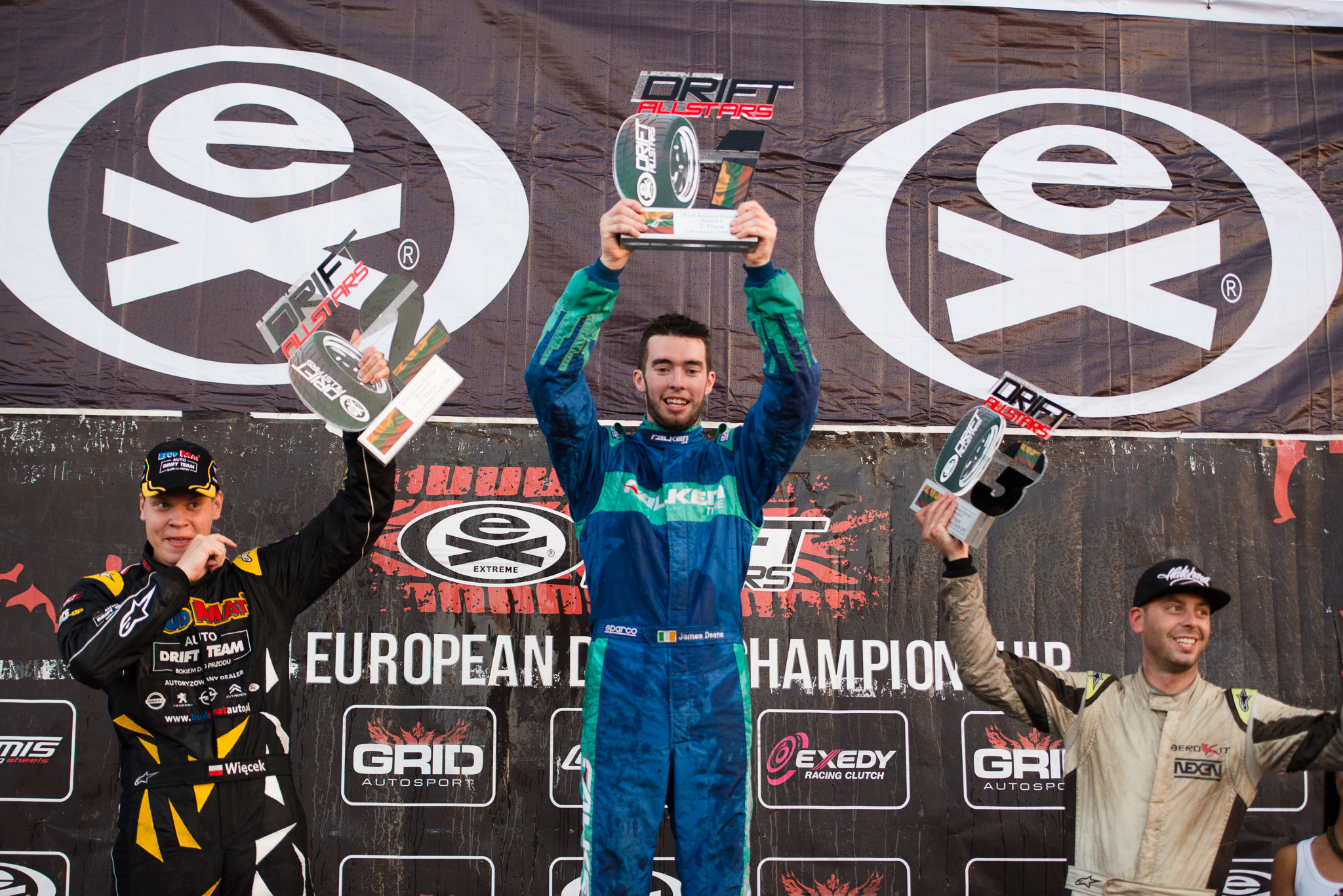 For the final standings, and to keep up to date with developments on the exciting 2015 Extreme Drift Allstars season, head to: www.drift-allstars.com