With the top 16 runners determined and the weather thankfully clearing to present a nice sunny bright sky we were straight back to business. In the above shot Motormaven’s Dan Bridle, Speedhunters’ Paddy McGrath and Drifted’s Will Epps get ready for what looks set to be a promising afternoon’s drifting. Top 16 rundown after the jump….

The Top 16 drivers made their way back onto the track with their respective pit ladies and parked up their machines for the crowd to see – obviously a few smokey burnouts were required to set the scene and the drivers gladly obliged. Whilst the Allstars MC’s set about introducing the drivers and interviewing them for the sizable crowd the media peeps snapped away for their static shots.  The turnout for Saturday’s event was absolutely huge, probably the biggest number of people in the UK who have witnessed drifting at any one time and they only got to see the qualifying. The on/off weather had dampened crowd numbers slightly for Sunday’s main event but had not dampened spirits in the slightest.  The real drift fans who travel the length of the country to support these events are in for an absolute treat.

The first pairing was Master McKeever against John Calvert.  Same cars, different motors and equally talented drivers it was going to be a good one.  Both cars came over the first left hump into the main area really close and marked each over perfectly taking a wide line close to the wall around the first long concrete-lined sweeper. Two runs wasn’t going to be enough so it’s a OMT!  There was a distinct knocking coming from the rear of Dwayne’s car and once checked over by McKeever senior it was deemed to be a broken halfshaft.  Team McKeever were given some time to fix this but after 2 more runs Jon Calvert progressed into the Top 8.  Amazing effort for getting the car sorted so quickly guys!

Next up was Stiggy in the little Mighty Starlet and Walton Smith in the GC8 Impreza.  The Type R shell is by no means large but it looks massive at the side of the ‘Mighty’.  Both drivers are on it and head straight out and run the wall all the way around the sweeper.  After a spin in the first run it wasn’t looking good for the Starlet.  Stiggy pushed Walton hard in the second run but it was Walton who made the 8.

Dan Chapman’s Team Driftworks Silvia had to battle with Nigel Colfer’s Toyota powered S13.  Seeing Dan regularly go to the Top 8 and beyond in the JDM series is the norm but on this occasion a spin in the final corner would mean that it was Colfer continuing on to the next set of battles.  This could be the last time we see Dan Chapman behind the wheel of this very capable machine as there is talk of the car going up for sale.  This would be a real shame as the car and driver have made a formidable pairing.

Next Portugal’s Bruno Esperanza from Team Twisted vs Poland’s Pawel Trela.  Bruno’s S14a cant match Trela’s speed and and angle on the first run and drops behind.  Trela follows much closer in the second battle and moves on. Bruno leaves the event with his car in one piece, which, if you know Bruno you know is a rarity!

Despite the home-court advantage Brad ‘Lightning’ McQueen had his work cut out to drop Australian Luke Fink out of the running.  After a OMT Fink pulled ahead and followed closely however Brad makes a small mistake which pushes him out and sends Fink into the Top 8.

The next pairing up is Alan McCord and his V8 S15 against Krys Terej in the SR20-powered FD.  Unfortunately for Terej the engine in the FD fell poorly which put an end to his challenge and McCord joined the others in the Final 8.

Several rotary-heads in the crowd had a smug satisfaction at the irony that ended Terej’s event.

The last of the Top 16 battles drew James Deane vs George Tilling.  What an match up this is – a Formula Drift driver against the man that is often responsible for changing UK grassroot driver’s tyres at practice days.  James’ car has had a few issues over the weekend and was seen being pushed back into the pits a few times and maybe isn’t working at its best.  Both of George’s runs are solid and he makes his way into the Top 8 as Deane’s car limps off track.  Amazing stuff,  first time in the Top 16 and now first time in the Top 8, George is having a great day.

A little bit of a breather and we are straight into the Top 8 battles.

First up Walton Smith and Jon Calvert.  On the warm up run Calvert flies straight up the inside of the big right-hander and passes Smith’s Subaru, the crowd go wild but the judges would prefer Calvert to have shadowed Smith’s line.  After the hard-fought judged runs it’s Walton Smith that progresses onwards.

Next up we have Nigel Colfer’s Black Toyota 1JZ S13 alongside Poitr Jankowsk’s white/green S13.  This round of JDM Allstars has a big Polish contingient – Trela and Marciej Bochenek present at JDM Alpine earlier this year have obviously spread the word about the series and others want a piece of the action.  There’s no clear winner after the first two battles and after a OMT its Colfer’s Black s13 that goes through.

With both drivers eager to do well, Luke Fink vs Pawel Trela was a Final Battle-type pairing.  Both drivers pushed super hard and it was going to be a tough call.  Initially Fink was given the win but this was later overturned due to an incident where Fink impacted Trela’s rear that was unclear from the judging point.  After protests from both camps the judges decide the fairest way to decide is a OMT. 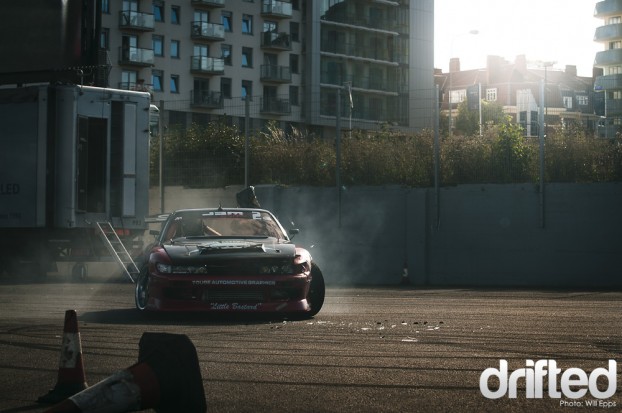 They run again and Fink parks up in the pits a little confused about the judges call and Trela advances.  I really don’t envy the job of the judges in these situations. 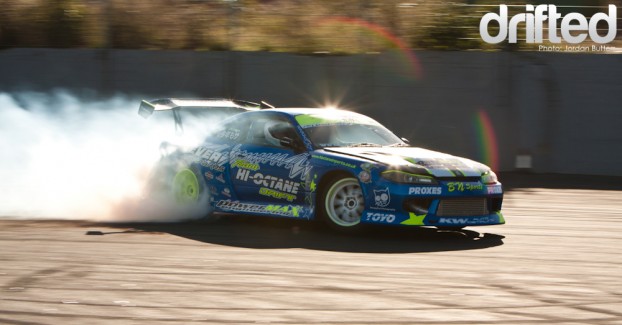 Next up we have David vs Goliath, George Tilling against Alan McCords monsterous V8 S15.  The power deficit between George’s near standard RB20 motor and the turbo charged V8 in the S15 is approximately 400bhp and the judges quite rightly take this into account when they make their decisions.  You can easily see George’s new found determination as he floats the low powered R32 skyline through the first corner in the the main part of the course making sure he carries plenty of speed down to the big right hander in front of the crowd.  Some of the crowd have made a impromptu banner from a piece of tarp and the hand made black gaffa tape letters form the words ‘GO GEORGE!’.

Mr Tilling must be on a massive natural adrenaline rush as he plants his car right next to the wall past the crowd.  Two runs just aren’t going to cut it so the judges call OMT and the crowd go crazy.  After the first fun McCord’s S15 is making some nasty noises at the back end and he unfortunately doesn’t return from the pits. Diagnosis – one broken differential.  George heads for the semi-finals to the delight of the crowd!

First Semi-Final pairing are Nigel Colfer in the 1JZ S13 and Walton Smith in the RB-powered Impreza.  These guys go at it crazy hard, staying nice and close through the course.  Colfer is controlling things well from both lead and chase positions but on the second battle he romps ahead to seal his place in the finals!

Not content with making the Top 16 and and Top 8 George Tilling’s Semi-Final fight is to be with Polish Pawel Trela in the uber-lock S13.  Both drivers truly deserve to be in this battle and its maximum viewing pleasure for everyone gathered around the course. 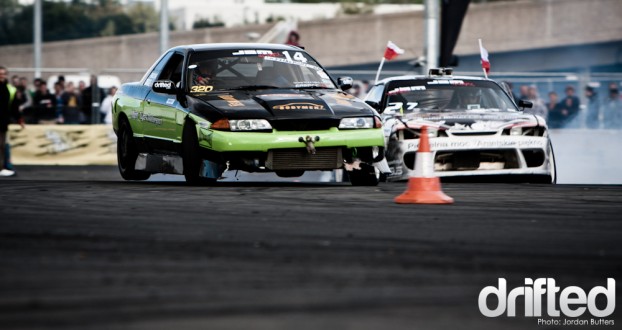 Trela takes the win and a spot in the Final whilst George has yet one more challenge for the day – to see if he can make 3rd on the podium by defeating the formidable Walton Smith.

After a tough battle George Tilling takes 3rd place and a spot on the Podium. Great driving that man!

So onto the Final – Pawel Trela against Nigel Colfer, both S13 Nissans on the outside, but  Toyota 1JZ vs Nissan SR20 under the bonnets.

Both drivers take turns to lead but NOTHING can seperate them after two runs. Super-close and consistent driving from both sides means the judges have to run them one more time. The crowd are just happy for the chance to see them battle again – this was going down to the wire! 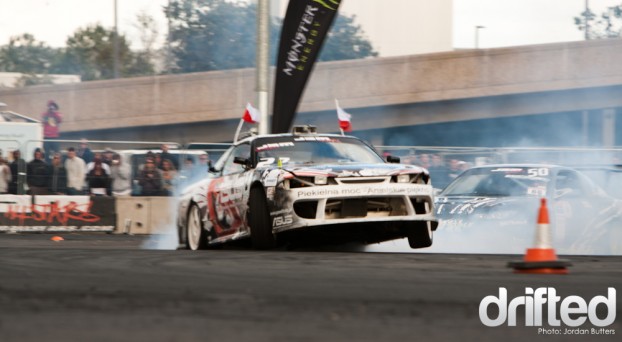 As the smoke settled from two awesome runs it was announced the judges had made a decision, i’m not sure how as both drivers were on FIRE in the final runs. 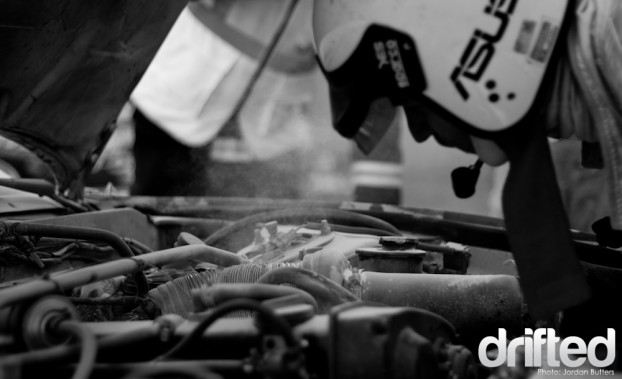 Maybe it was because English wasn’t his native language but Trela took this unfortunate wording a bit too far, his turbo feed dumping oil onto the red hot manifold and setting the turbo and surrounding components alight. Thankfully fellow competitor Mr Tilling was at hand with an extinguisher and put the flames out before any serious damage occurred. What an end to an eventful and tiring day!

The crowd was gathered and the champagne and trophies were ready for the judges decision. The JDM Allstars Wembley 2010 winner was – Pawel Trela! 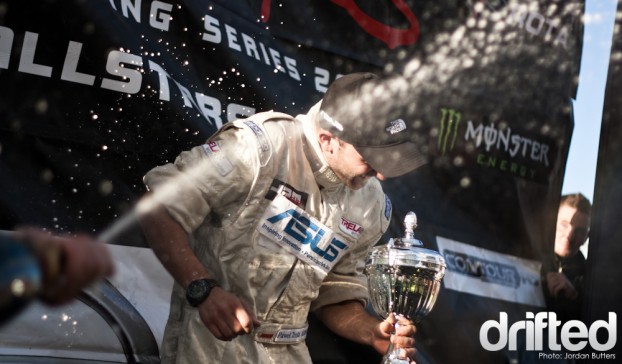 That wraps up another year at JDM Allstars Wembley. You can catch the final round of the 2010 JDM Allstars season at Silverstone, UK on Sunday 5th September. The championship is still wide open at the top and Drifted will be there as ever to catch all the action.