To celebrate the launch of the Extreme Drift Allstars end of year video we sat down with Aatomotion’s Vince Knight to chat about the in’s and out’s of shooting drift and the making of the season finale viral video #JUDGEMENTDAY. Check out the video below first and then read on for our exclusive look behind the scenes… 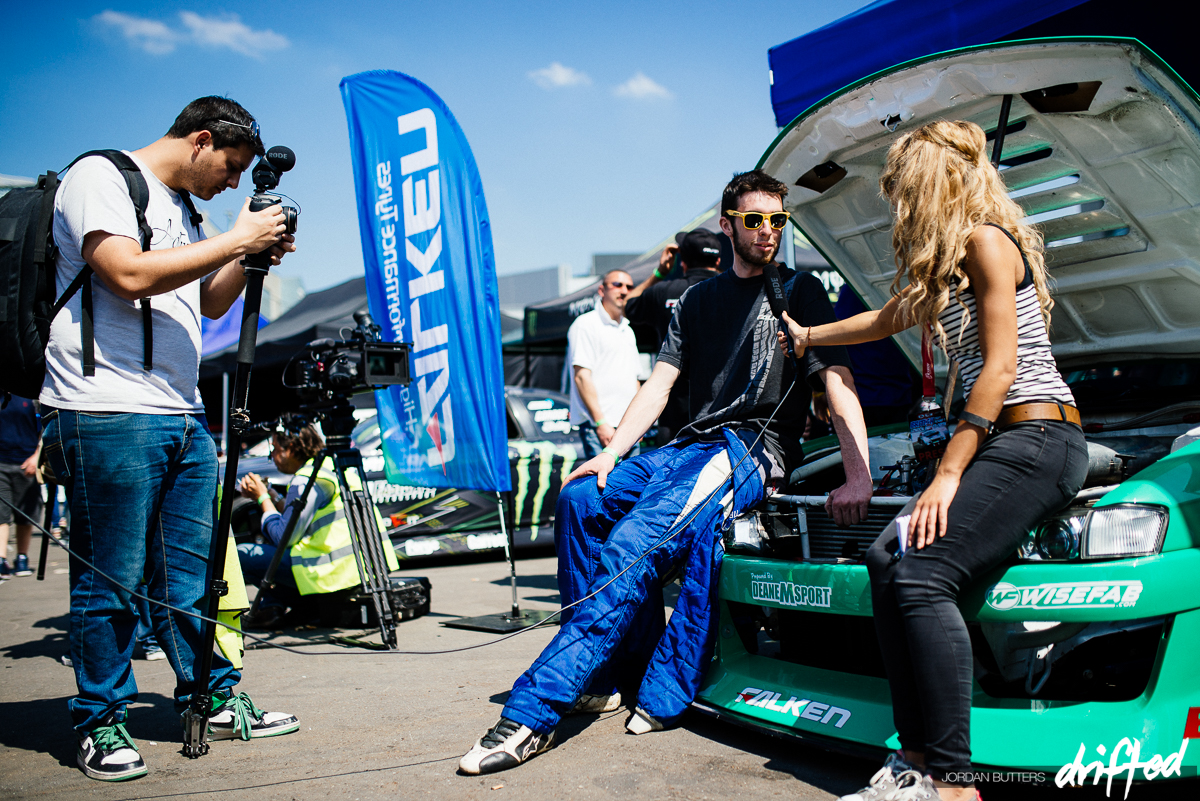 Hey Vince, thanks for taking the time to talk to Drifted about your work. You’ve been incredibly busy this year, touring Europe with the Extreme Drift Allstars series and turning out video after video. This year has seen a real shift in the type of viral video being produced. There’s a clear narrative and a theme behind each one - what drove this change in approach?

I’ve been shooting drifting for the last five or so years now and over these years the number of videos being produced at events has grown in both quantity and quality; I think really it’s something that has developed from trying to produce content that is different to what’s already out there and standing out. Aside from motorsport, I shoot a lot of drama and television, so recently I’ve been trying to bring this side of things into the drift films. 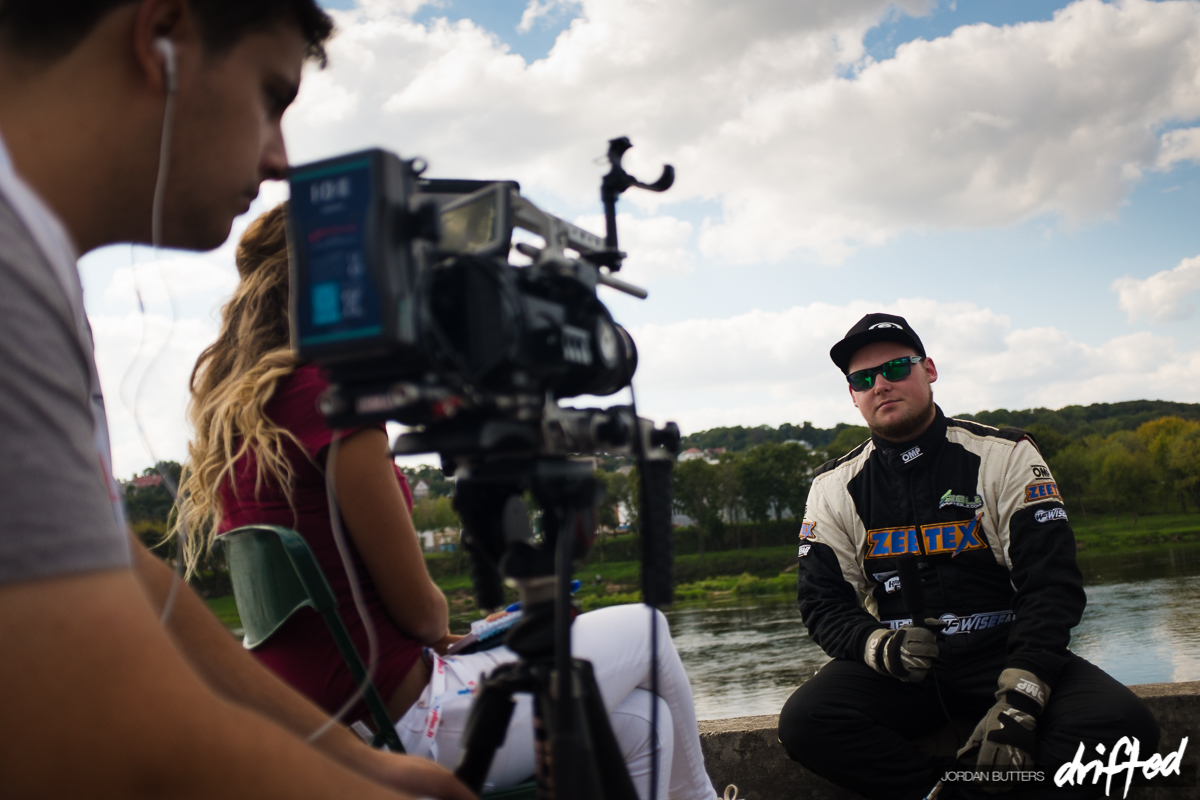 What’s the creative process like for coming up with the ideas? You work with a small team of videographers; does everyone bring ideas to the table, or is it usually driven by one person?

We’re a close-knit team and we all bring something different to the table. Myself, Lukas Skersas (BandanaBoy) and Matt Murray all film on the ground while our aerial specialist Danny Cooke gets all of those epic shots from the skies. The films are very much a collaborative process, and we all work together well. I’ll be honest though, very often we go into an event with no idea for the final outcome; this is often something decided on during the editing stage. The style and feel of a film can greatly differ depending on the event, for example the weather and the location and outcome of the event all play a big role in deciding the direction.

What is important to me though is that every viral from the season has a different theme so that they stand out as separate pieces of work and the content stays fresh and interesting for the viewers. There are some concepts and ideas which are pre-planned, ready at our disposal, for example Super 8 style film that we put out from Sosnova in the Czech Republic and the #POV video from Sweden - that one was a lot of fun to make.

The demand for more content to be delivered to a higher standard and in a shorter time frame is ever increasing - it must keep you fairly busy between events?

The level of videos from drifting has just exploded over recent years, the ever increase in technology and accessibility has meant it’s now very cheap to produce high quality content with good production values. With social media growing as well, people expect to see content almost immediately on their phones. It’s actually a bit of a nightmare; our schedules between events often see us editing on the road and uploading in cafes wherever we find good Wi-Fi. One thing that Drift Allstars can boast about is the fast delivery of highlights, and Lukas (above) works like a madman to get this done, having a highlights video on social media the SAME DAY before we hit the afterparty.

What do you enjoy most about shooting the Extreme Drift Allstars series?

For me, Drift Allstars is more than drifting… it’s a family and a wild adventure. There is such a good relationship between everyone that makes the series happen; the crew, the media team, the drivers, we are all in it together and have the most incredible times in amazing countries. So for me what I enjoy most is working hard and partying hard beside truly talented and dedicated people.

On to your latest (and greatest?) video of the year. Where did the idea for the #JUDGEMENTDAY viral come from?

This concept of Altenzo driver Martin Richards appearing like the Terminator and stealing a drift car is something I’ve been sat on for years. Actually, I shot another version two years ago in Hungary during the 2012 Drift Allstars season. Unfortunately due to theft the footage was lost along with my kit (note to thieves, please send footage vince@aatomotion.com!). In a way it was a good thing that the first attempt didn’t happen because I’ve been able to revisit the idea and create something of a much higher standard this time around.

Talk me through the process. You’re in another country with minimal resources for props and lighting - how did you pull off the shoot?

I’m a big fan of working with minimal resources. It literally was Matt and I going around the pits at night and collecting together torches and lamps, unwiring flood lights from trucks and running extension cables – our white high vis vests made a great diffusion gel/silk. The combination of nice lighting and a grade can be a world of difference. The biggest down fall of this shoot was the audio. While we shot this at night there was still a lot of interference from generators and traffic, resulting in me needing to re-record and dub all the dialogue, foley every sound effect and add in atmosphere. I had Denisas from Sinex Productions on set as VFX consultant to ensure we had the right tracking markers in place for the best result.

Tell me a bit about Sinex – what was their role in the video and how involved were they from the start?

Denisas is a Lithuanian based film maker/VFX artist and friend of mine who I first collaborated with on Element-D, our film from Lithuania last year. Denisas brought his editing and VFX skills to the table and created the main section to take #JUDGEMENTDAY to the next level. He’s done an absolutely incredible job again!

What’s it like working with drivers when it comes to shooting these things? I mean, these guys aren’t actors are they?

Haha it’s true, they’re not! I’ve worked with worse actors though believe me! Martin and I have a good friendship and he’s had practice playing the Terminator role in Hungary - he’s just perfect for it. Maybe all these small virals are leading up to a full blown drama? Casting is right after drivers briefing! Drivers practising their lines, angle and speed will have a whole new meaning.

What’s it like working with BandanaBoy Lukas? You guys have pretty much toured Europe living in each others pockets?

We have, it’s actually becoming pretty ridiculous haha - I’ve shared a bed with him more times this year than my ex-girlfriend (probably one of the reasons why she’s my ex). Lukas and I have a great relationship; we have very different approaches to our work meaning our collaborations get the best of both. He’s great at capturing the raw and fun lifestyle side of drifting, and is able to put out edits at record breaking speeds. I prefer to create something a bit more arty and formulated, so we are learning a lot from each other.

We also work alongside Danny Cooke who is hands down one of the most talented film makers and aerial photographers I know. Matt Murray rounds our team to four and like Danny is a hugely skilled film maker. The four of us combined make #teammedia… the shooting, partying, powerhouse behind Extreme Drift Allstars’ media.

Tell me one thing about each and every member of #teammedia.

Legend has it that Danny is actually the most talented person at everything in the world. His unreleased single ‘Drunk Allstars’ will be a hit in 2015. Matt’s hickey went more viral than any of our films. Lukas and I have shared more than just beds during our escapades through Europe and Russia. 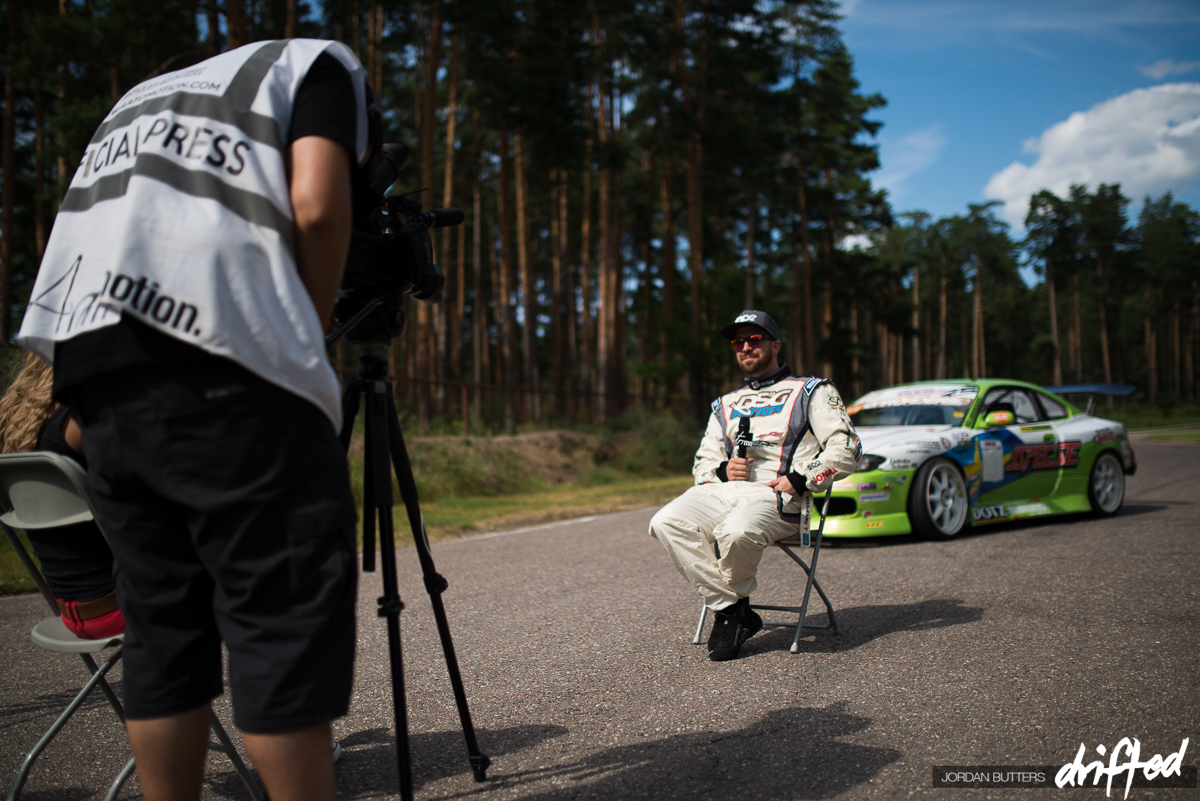 Alongside the event videos and viral edits you’ve been working on the Extreme Drift Allstars TV show which airs very shortly. How does this process differ from the made-for-web films?

Yep, unknown to most we have also been producing an eight-episode television show that follows the series and drivers around Europe. This is really a whole different world to the internet virals, with broadcast standards for picture and sound to follow and much longer lengths to keep audiences entertained for around 23 minutes per episode. We have a ridiculous amount of footage, 1.5TB from Estonia alone! Editing the show is a huge task that Lukas has taken on and he’s delivering like a boss. More news soon on channels and countries the show will be available in!

Anything else to add?

The 2014 season of Extreme Drift Allstars has been a lot of fun and work for us, and we hope that people have enjoyed the content we’ve created. A huge thank you to the crew at Drift Allstars, all the sponsors of the series, the drivers and their teams, the host countries and the fans that make this the most exciting and adrenaline filled drifting championship to be involved in!