Committed
adjective
1. pledged or bound to a certain course or policy; dedicated.

In competitive drifting there are no half-measures.

Success favours the committed and failure awaits the meek.

There isn’t a set of curves on the Maxxis Tyres British Drift Championship calendar that demands commitment quite like Knockhill Racing Circuit, just north of Edinburgh in Scotland.

Corner one, known to the locals at Dufus Dip, doesn’t reward those who do things by halves.

As drivers approach this tricky right-hander, the inside apex disappears rapidly over the edge of a hill, leaving no point of reference.

The asphalt falls away beneath your tyres , grip levels fall off a cliff too, washing the car out towards the gravel trap.

Despite this, the only acceptable way to tackle Dufus Dip is with full commitment.

When it pays off, the feeling is uplifting. 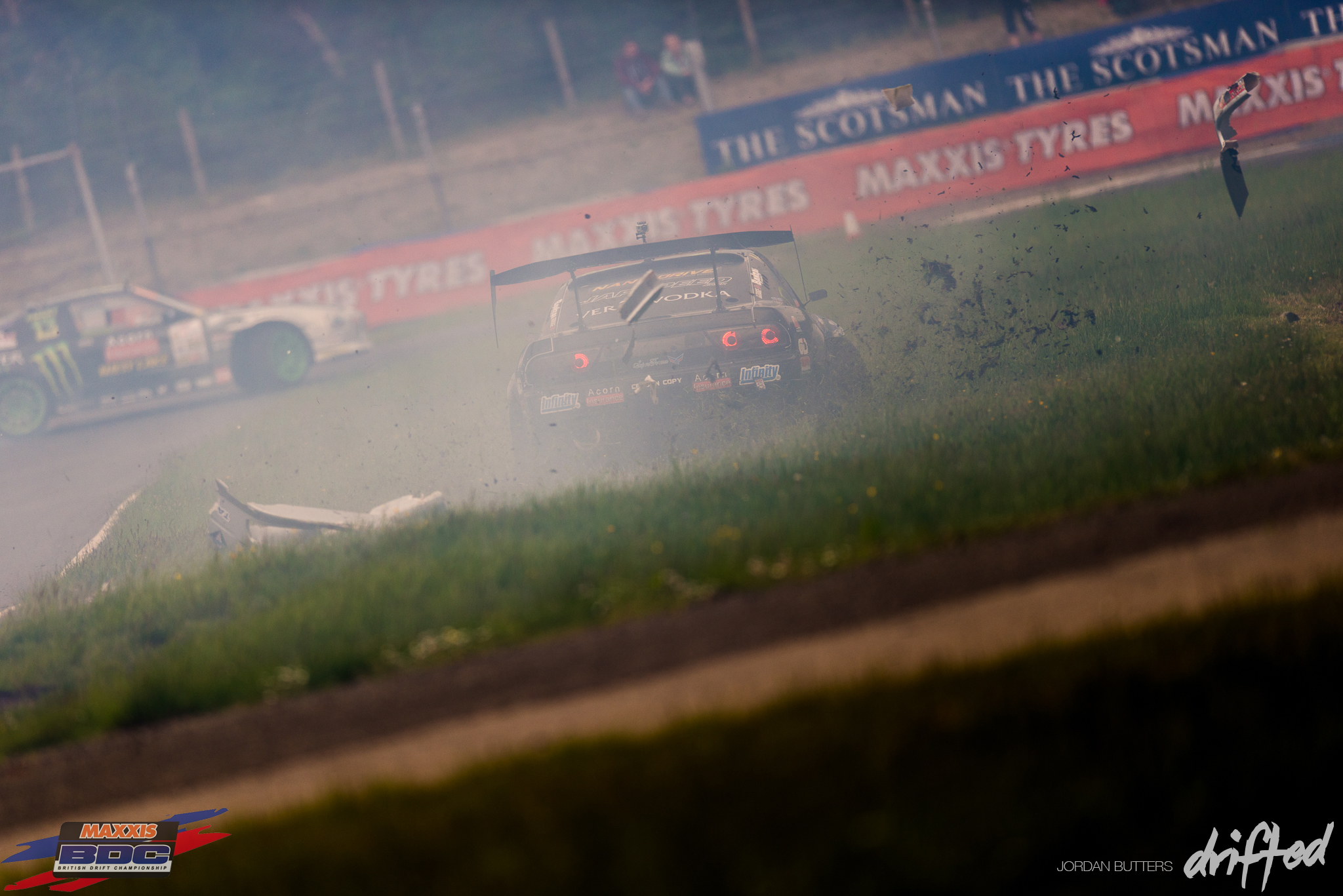 But, when you get it wrong, so are the kerbs. Car parts are easily collected, pride takes longer to regather.

I often wonder what goes through a driver’s mind as they prepare to take on Knockhill’s dips and drops. As a photographer, you try and read body language and expressions through the viewfinder. Some seem focused and determined…

…whereas others are relaxed, right up to the moment they launch from the line.

Standing on the start line watching the cars disappear over the crest of the hill, you have no idea if the run is a success or a failure. The guys running the show are pretty damn committed too - they don’t even get to see the show here!

For the drivers sitting on the start line ready to attack the track isn’t the start of the battle however, not by a long shot. Let’s rewind a bit first.

The commitment to that first turn kicks in months earlier. The hours spent fabricating, building, tweaking and tuning in garages and workshops throughout Europe display commitment to the nth degree.

The level of preparation in order to become, and remain, competitive takes some serious committing to.

A commitment to drive hard. To have fun. To win.

Commitment to put every shred of energy into making the best of everything that you do.

Commitment to fix, push, test and tweak every component…

…to wring every last drop of performance out of it.

Every lb/ft counts, each psi matters. All of those bhps need to be present and accounted for.

The little touches help too, of course…

As you hurtle towards the first bend, initiation is make or break time. You get an instant feel for the surface of the circuit. Did you go too slow to make the corner?

Did you initiate too early? Too late? Were you going too fast? Some would argue that there’s no such thing.

Commitment to give everything you have, no matter what the circuit…

…or the heavens throw at you.

Scotland and changeable weather go hand-in-hand. You simply can’t read it, you can only react.

One minute you can be enjoying beaming sunshine…

…and the next running for cover as the Gods of precipitation throw everything they have at you.

Up here, they don’t hold back. Never before have I seen so much rain at a drift event.

Smoke turns to spray and the battle to keep the car on line intensifies ten-fold.

Quite how these guys (and girls) manage to keep composed in these conditions is beyond me.

Although pace only drops marginally, the commitment required never falters.

Watching the cars approach at speed, you can never imagine that they’ll make it around the corner. It’s pretty mesmerising to watch.

Competitors still go door to door, as they did in the dry.

But the margin for error is… well, marginal.

The British Drift Championship operates a zero tolerance policy on dirt dropping at Knockhill. The circuit is the circuit, the grass is not. One wheel off and you win an instant zero. Harsh, but fair.

But the drivers have to stay committed. They know that their opponent certainly will.

Give an inch and your opponent will take a mile. And probably the victory too.

Failure can be snatched from the jaws of victory all too easily in this sport.

The cards don’t always fall as you expect. But, commitment doesn’t let you quit.

And you vow to come back stronger next time, committed to win.