Mondello Park Racing Circuit once again played host to the halfway mark of the Irish Drift Championship with Round Three: Global Warfare. For the past decade, some of the best drivers from all corners of the globe have competed but none have managed to claim top spot. For round three, the gauntlet was laid down. Japan, America, France, Spain, and the UK threw their best drivers at the purpose built County Kildare track, but would it be enough to break the locals’ ten-year streak?

From Japan, 2008 D1GP Champion and 2011 Formula D Champion Daigo Saito was joined along side his Achilles Racing team-mate Robbie Nishida. San Diego native and former Formula D competitor Matt Powers would find himself behind the wheel of the DMAC LHD Onevia. From the UK, Driftworks owner Phil Morrison piloted the newly rebuilt LSX powered AE86. Team Japspeed also made the journey with their 1.5JZ powered Subaru Impreza and Danny Eyles at the helm. Steve “Stiggy” Evans and his trusty Starlet were out on track. David Waterworth and his Viper SRT10 S15 represented Scotland, and would create thunder all weekend. From the Spanish contingent, Team Aerokit’s Louis Lopez become a crowd favourite with his aggressive entries and speed. Finally, the French showman Jerome Vassia came out to “kick Irish ass.” 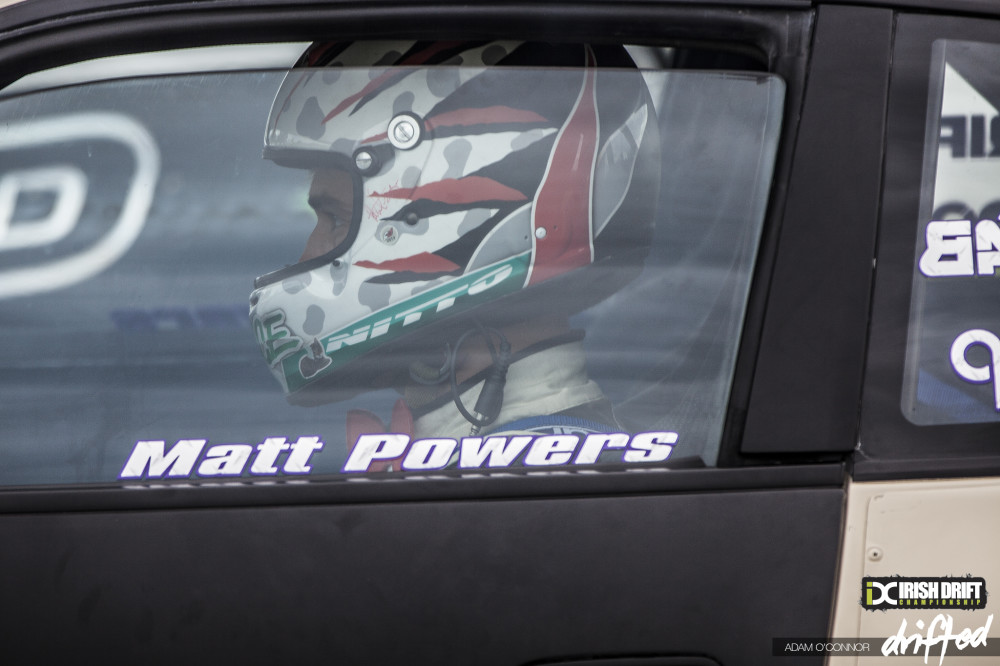 Three of the five rounds of the Irish Drift Championship take place within the grounds of the Mondello Park circuit this year. So, along with some of the biggest names in drifting lining up on the grid, the decision was made to create a purpose built track just for the event. With initiation speeds of over 85mph, and walls lined with numerous front and rear clipping points, it was going to be a fast but technical track.

Already four months of hard battling behind them, some cars showed all the scars of hard driving and even harder battling. Team Dealtwidth’s Brian Egan brought his F20c AE86 into the weekend hungry for a podium on home soil.

Phil Morrison would take the Driftworks LSX powered 800hp AE86 to its first competitive twin battle over the weekend leaving whoever dare chase in a massive cloud of smoke. 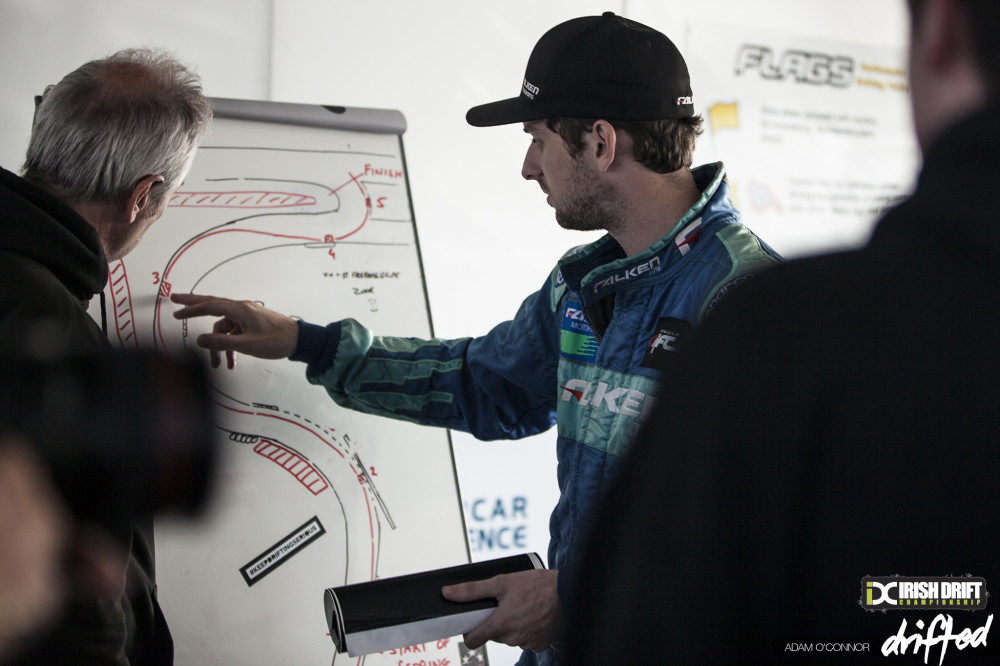 Irish Drift veteran and current Formula D competitor Darren “D-Mac” McNamara returned from FD duties in New Jersey the week previous and was out to take on the best in the world in his own backyard. Darren runs through the course and the clipping points with head judge Kieran Hynes before heading out for the first practice session of the morning. 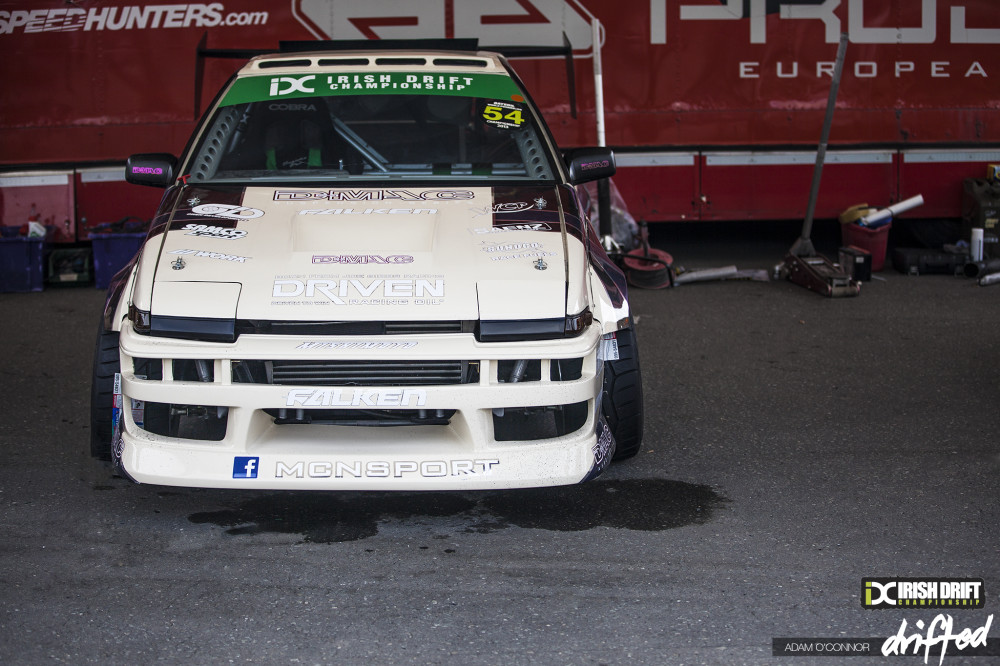 Darren debuted the latest reincarnation of his immaculately prepared DMAC N2 Rotary powered AE86. The Hachi has come through many liveries and designs over the last few years, but this iteration sees form and function blend together to create the best design yet. 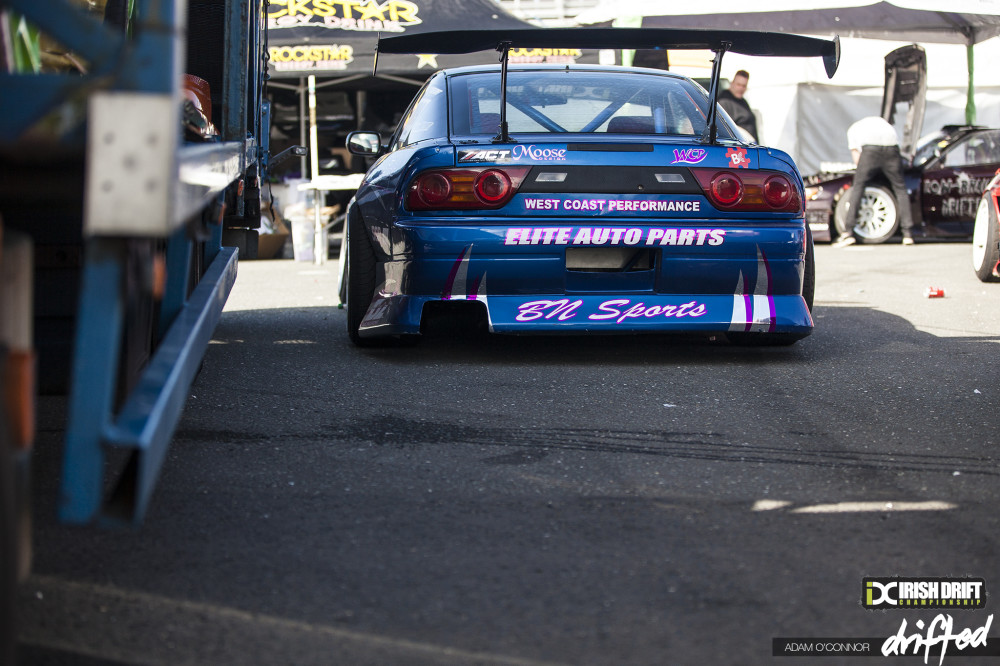 As always with the Irish Drift Championship, Saturday saw the Rookie and Semi Pro drivers take to the track to compete for Championship points with the Top 3 going through to do battle with the Pros on Sunday. Saturday included a massive 79 drivers on the grid for the Semi-Pro and Rookie battles.

Semi Pro driver Michael Meegan and his 600hp R32 was out to put on a show for packed out crowd on both Saturday and Sunday. 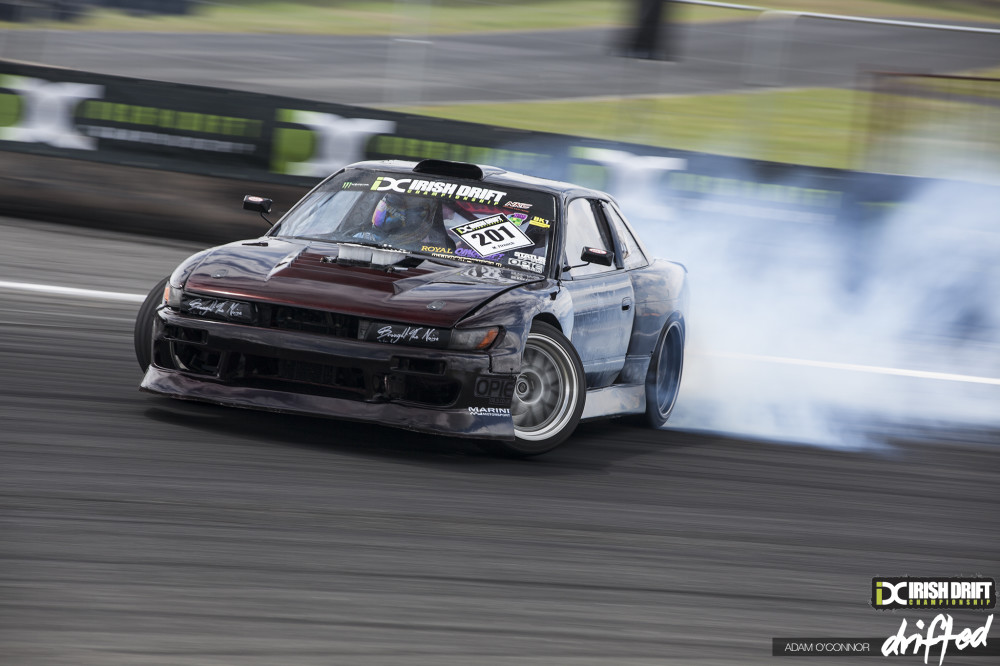 Showman Martin Ffrench was at the helm, to create thunder, smoke and chaos out on track. His aggression behind the wheel is second to none.

Dirt dropping, wall clipping and backwards entries were all standard procedure for Frenchy. 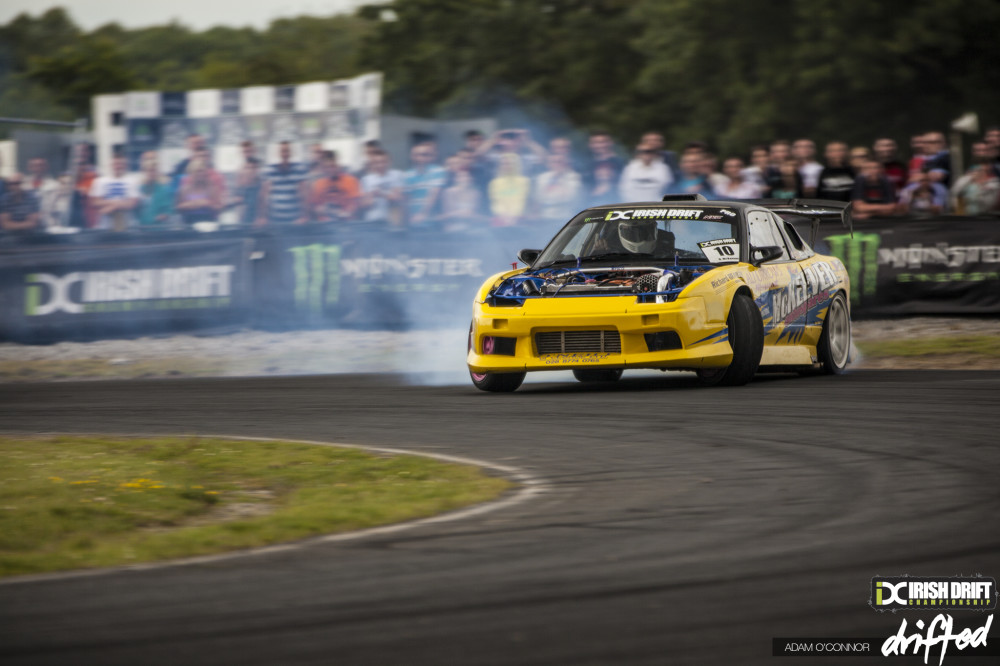 Championship leader coming into Round Three, Duane McKeever was back behind the wheel of RB powered 180x after competing in Richard Bradley and Sam Farrell’s cars at Round 1 and 2 due to mechanical error with his own. Duane was called “The new James Deane” by fellow Irishman Alan Lenihan because of his aggressive style and unmatched twin battling.

The mighty Starlet of Steve “Stiggy” Evans screamed its way through the weekend and put a smile on everyone, from drivers to fans face every time he graced the track.

Semi Pro Paul Stryker would have numerous encounters with the concrete wall over the weekend, gradually removing the space-framed rear end run after run. 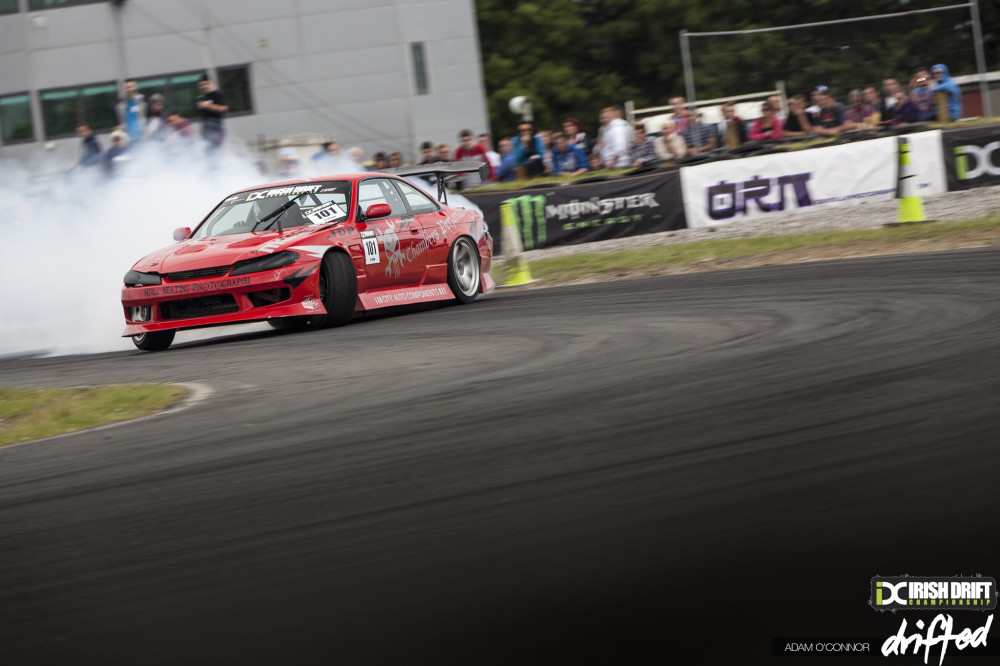 Semi Pro competitor Richy O’Neil sat on the sidelines for Sunday watching with his head in his hands as Japan’s own Daigo Saito launched O’Neil’s pride and joy backwards into Mondello’s tight turns. Daigo was supposed to pilot the MG Crash Repairs 2JZ Toyota Altezza but mechanical issues would plague the car all weekend. 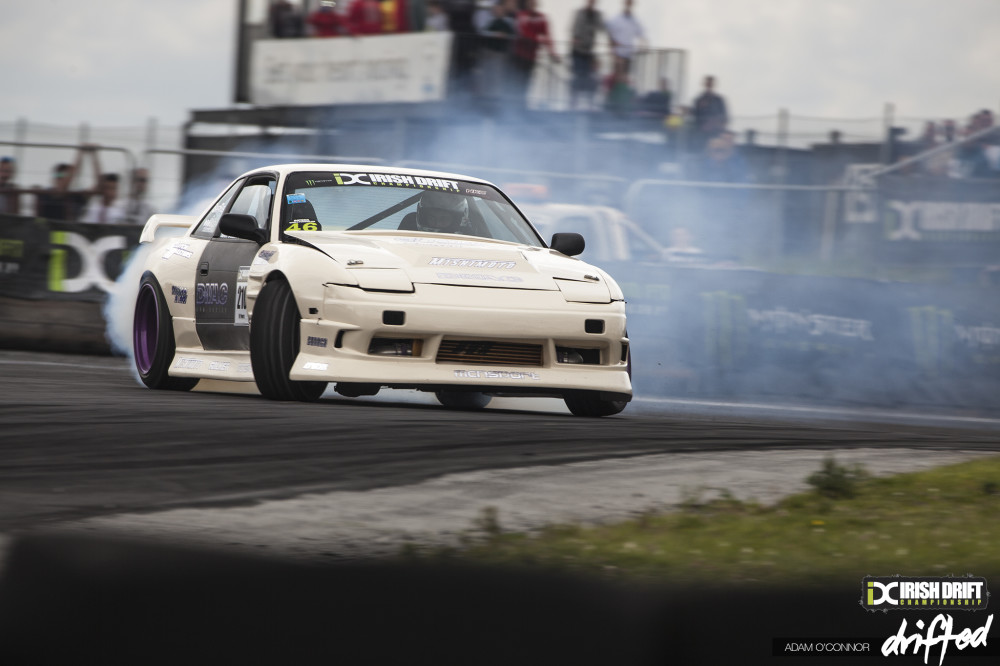 Former Formula D driver Matt Powers looked comfortable and consistent in Darren McNamara’s LHD Onevia. Powers has taken the year out of competitive drifting but returned to competition just for this event. He and his spotter Max rented a camper van for their stay in the Emerald Isle and can be spotted all this week surfing on the west coast of Ireland.

Championship contender Paul ‘The Wall’ Murphy was looking to gain valuable points on overall leader Duane McKeever heading into Round Four at Ennis, Co. Clare but his weekend would end prematurely, bowing out of proceedings in the Top 32.

Team Japspeed driver Danny Eyles is no stranger to Irish competitive drifting. He has made the trip from the UK many times before, although his weekend was also cut short during the Top 32 battles. 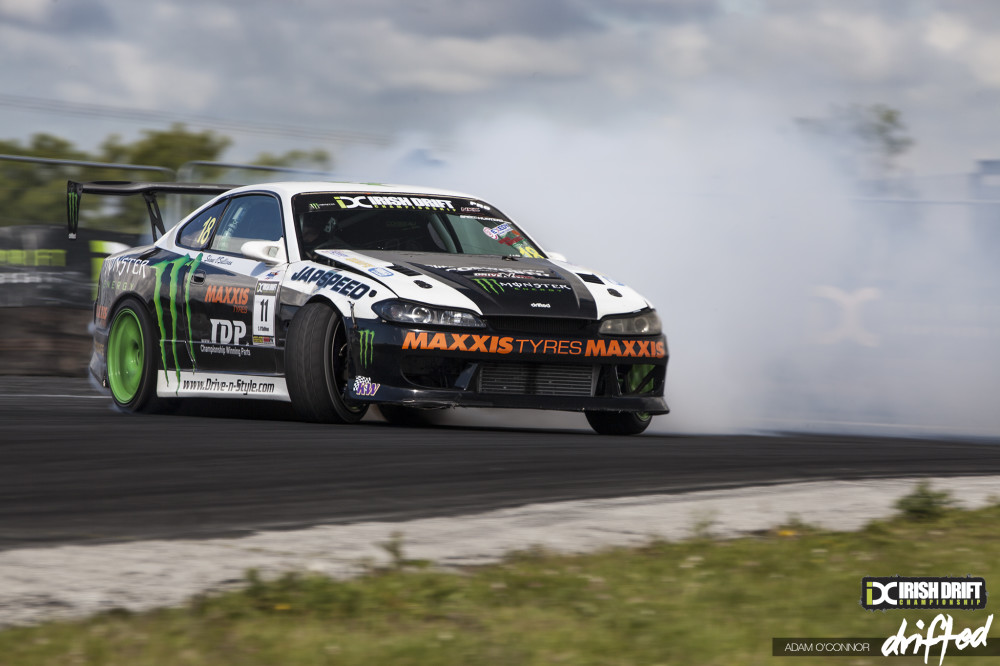 Team Japspeed’s Shane O’Sullivan would join Danny out on track, but like his teammate would also end the weekend at Top 32.

Robbie Nishida joined his Achilles brother on track behind the wheel of the MG Crash Repairs 2JZ S15. Nishida looked right at home, flicking the S15 backwards into clip two from the early hours of Saturday morning’s practice. 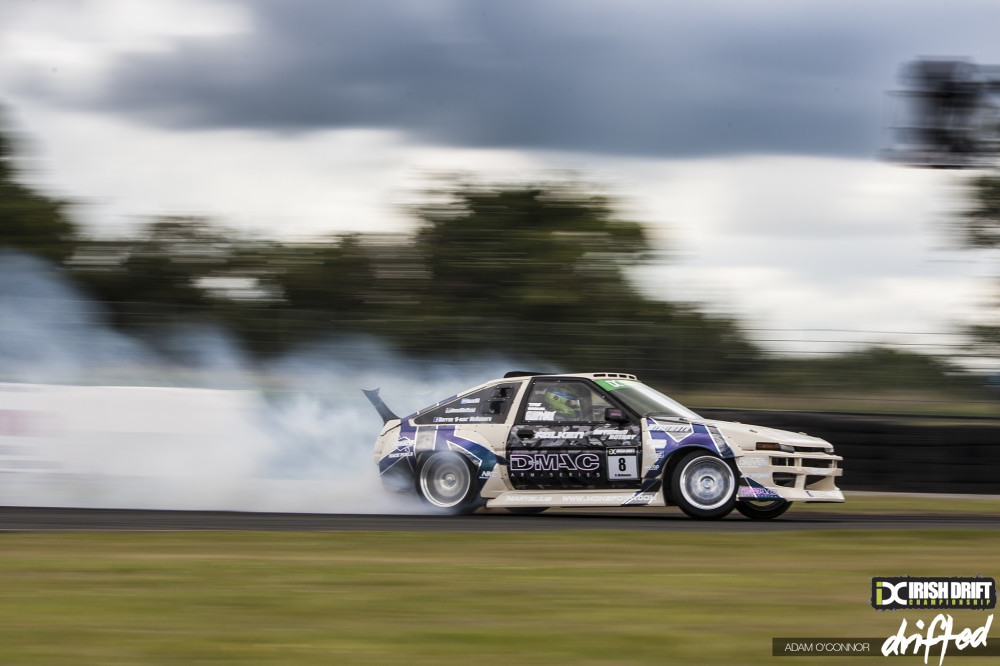 On to qualifying, Darren McNamara finally seemed to iron out the mechanical issues that have plagued the Corolla in previous years. He would take top qualifier with a blistering 93 point run all at the cost of his spoiler on clip two.

Team WKD Imports owner Wesley Keating jumped into second with an 89.5 on the board. The Rocket Bunny 180sx has run impeccably since Round One and looks to continue to dominate throughout the year. 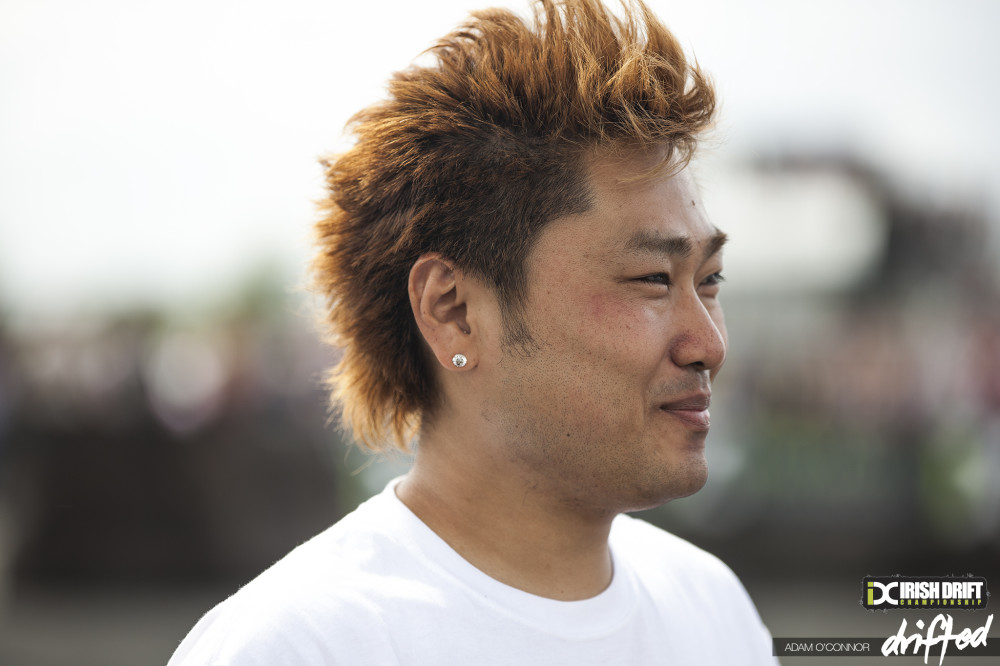 Finishing off the qualifying leader board was Daigo Saito. Saito showed why he is the most decorated and successful drifter in the world to date. Despite finding himself in the unfamiliar surroundings, he would manage to take third place heading into the Top 32. 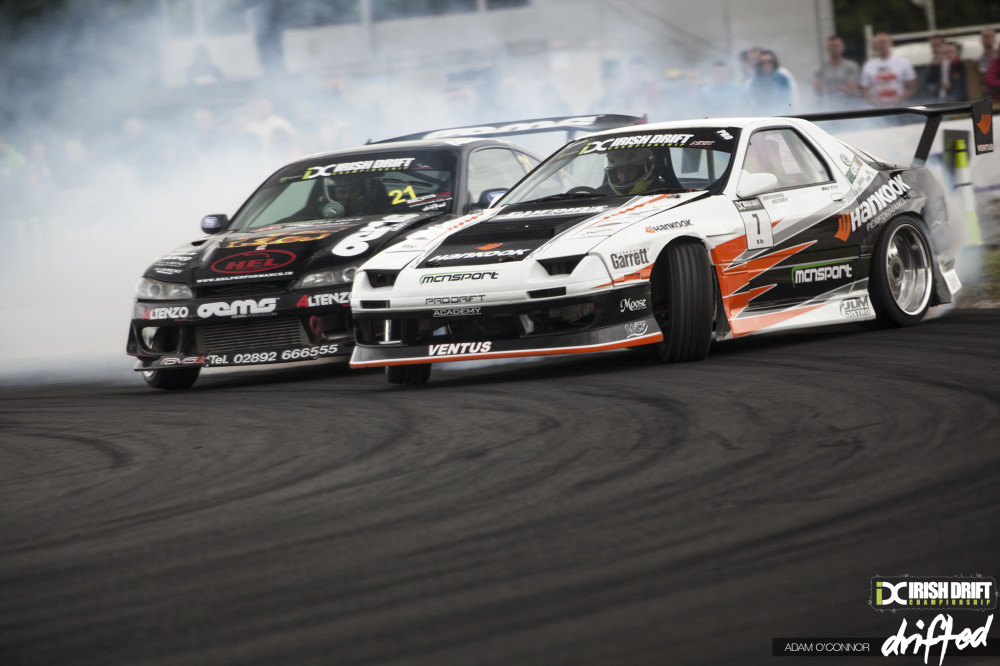 For the first time in Irish Drift Championship history, the Top 32 battles were introduced ahead of the usual Superlap and Top 16 due to Round Three having the highest number of Pro drivers on the grid in a number of years. Mike Fitz would be the first to progress following a clear cut battle with the UK’s own Paul Conlan. Fitz is still fighting for his first ever victory and, round by round, the little Hankook FC has battled its way through some of the best in the business.

The Top 32 created some interesting match ups. In a battle of high profile AE86s, D-Mac took on Phil Morrison’s DW86 800hp tire slayer, and it was one of the closest’s battles of the day. Morrison would advance, cutting D-Mac’s weekend short.

Another power house to bow out at the Top 32 was Martin Ffrench in the Low Brain Drifters V8 PS13. Ffrench came up against the giant killer Paul McCarthy, and laid down two text book runs, but would not advance any further.

Paul Murphy took on the other half of the McCarthy brothers, with John McCarthy advancing into the Top 16. Paul will be hoping for better success in the final two rounds if he hopes to take the championship win. 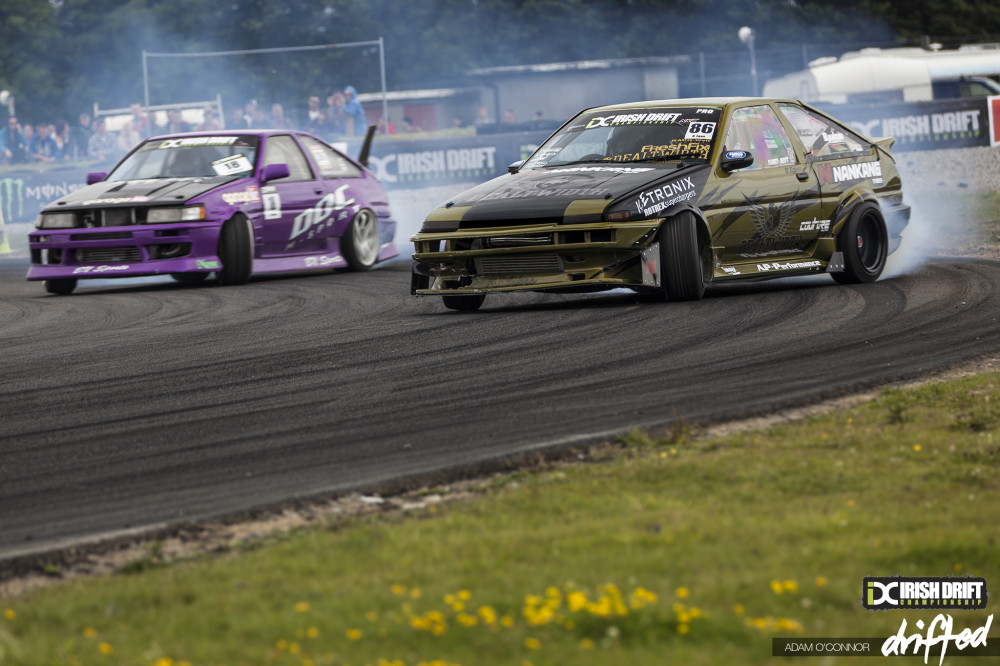 Another battle of the Hachi-Rocku’s in the Top 32 would see Team Dealthwidths Brian Egan go up against DOC Motorsports Diarmuid O’Connell. The supercharged F20c of Egan took the win on the day and moved onto the Top 16.

Falling back into the regular Irish Drift Championship format, the Superlap was up next on the schedule. Superlap consists of a single do-or-die pass of the course to impress the judges and the crowd on style, line, and impact of the run, scored on a ten point basis. Superlap was dominated by Daigo Saito who laid down the gauntlet with a 29 out of a possible 30, and in the process removed much of the rear of the MG Crash Repairs S14.5! On to the Top 16…

Matt Powers soaked up the Irish atmosphere, and would feel right at home in the soaring heat.

Robbie Nishida introduced himself as ‘Robbie is ainm dom’, which translates to ‘my name is Robbie’ in Irish.

In ten years of competitive drifting, it’s safe to say, this was not Phil Morrison’s first Top 16. But it was his first in the DW86. 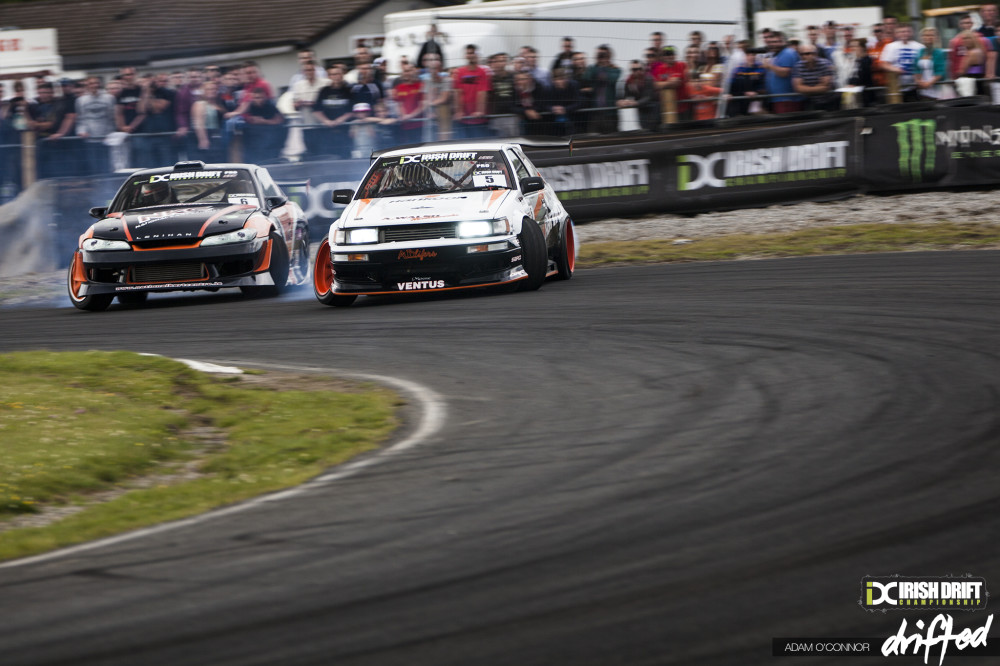 Team Hankook’s Adrian Walsh craved his way passed the National Kart Centre S13.5 of Alan Lenihan and would be a formidable force for anyone on his way to the podium. 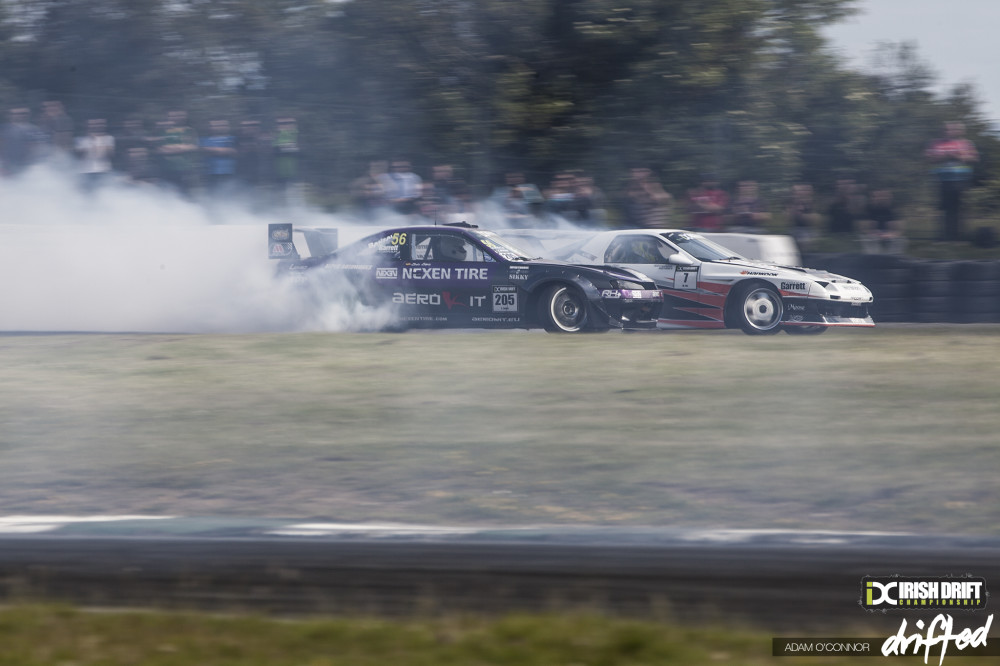 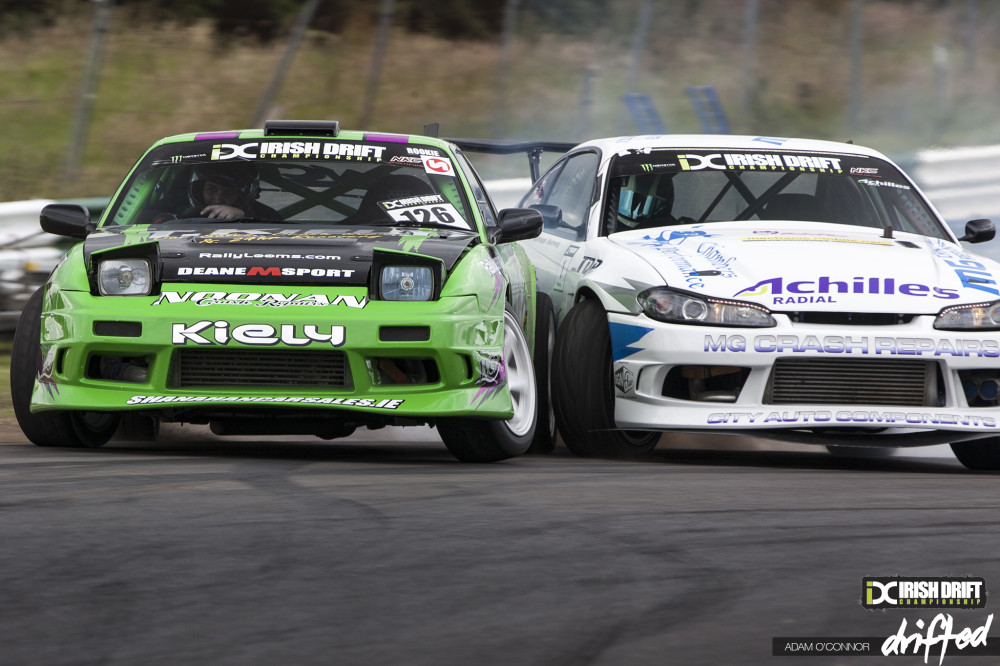 Rubbing is racing. Dean ‘Karnage’ Kearney shows Jack Shanahan who’s boss in run one of their match. Shanahan unfortunately had a huge impact with the wall, removing much of the front and rear suspension, but thankfully made it out okay.

Wesley Keating would run wide on his Top 16 chase run with John McCarthy, dropping a wheel into clip three sucking the 180sx into the gravel, allowing McCarthy to progress.

Adrian Walsh was a force to be reckoned with, taking down Richard Bradley, Alan Lenihan, Barry Leonard, and Brian Egan throughout the day. 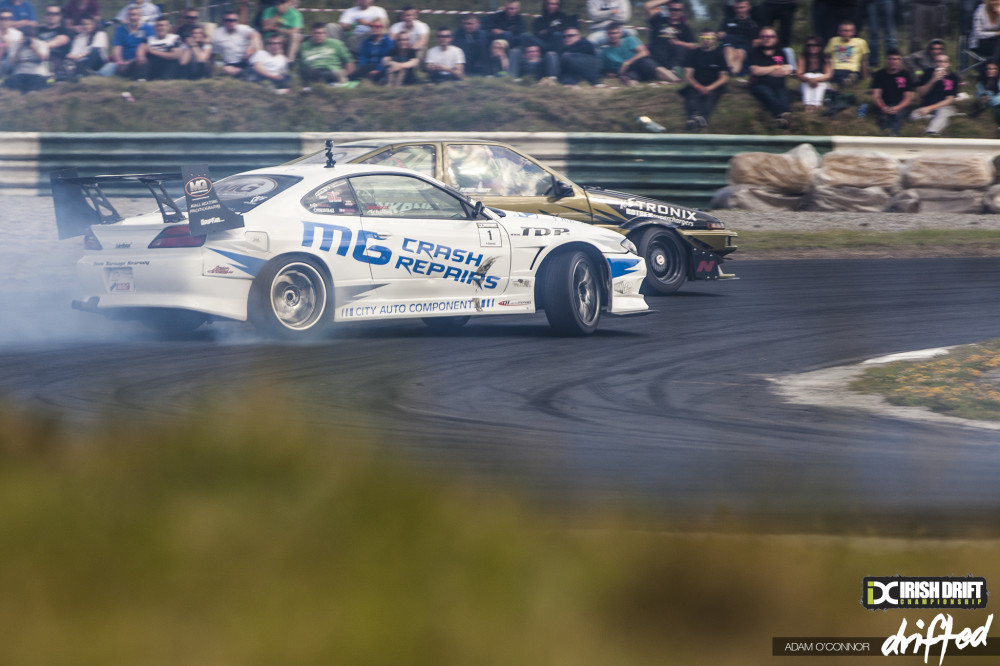 With that, the final was decided. Ireland would retain its ten year streak from many international challengers. Championship leader Duane McKeever took on the underdog Adrian Walsh for the top step of the podium. McKeever is one of the strongest competitors this year, but Walsh was on form all weekend. After two of the best runs of the day, the judges would deem them inseparable and needed a OMT. Tension rose as McKeever and Walsh would once again put in two perfect runs, but the judges saw differences and had made a decision.

McKeever took the win. He once again cemented his position at the top of the championship leaderboard with two rounds left to go. It looks like McKeever’s championship to lose at this stage, but don’t count out the back runners - after all, this is drifting and anything can happen. As the County Tyrone returns home with yet another trophy for the mantle piece, he must get the RB powered 180sx back to full health after boost solenoid problems, misfires, and losing two cylinders all while taking the podium.

For the next stop on the calendar, the Irish Drift Championship heads west to Ennis, Co. Clare. It’s a tight and technical track meaning the horsepower race will be less of a factor. A big congratulations to the Irish Drift Championship crew, and especially Dave Egan who managed to pull off the biggest and best drifting event to be held in Ireland to date. Can it be topped? Find out at Round Four.