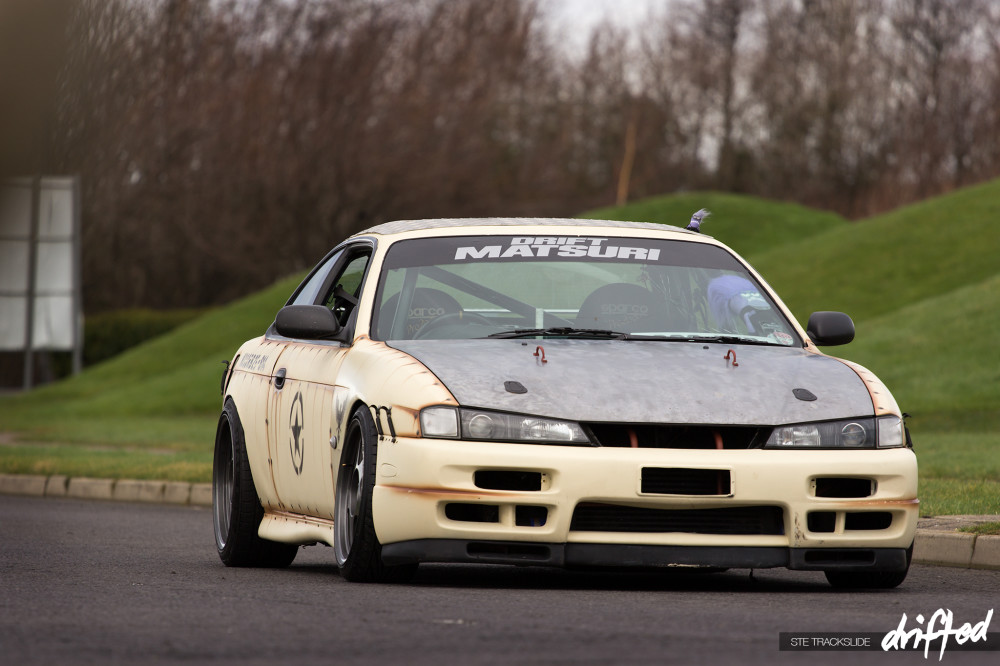 During a run of the mill ‘grassroots’ drift practice day at Teesside Autodrome a few months ago, I spotted a S14a which stood out from the crowd, a crowd which is usually filled with old BMWs and other beat up drift missiles that people tend to use while they find their drift legs. After speaking to the owner about his car and hearing more of what he had done to it to prepare it for a future in competition drifting, I knew I wanted to spend more time with it. We had arranged to meet up the day before a drift practice day at Teesside for a feature photoshoot.

One of the first things that caught my eye for obvious reasons was the paint job, and it’s exactly that; the livery on this car was all hand painted and airbrushed by Louis and his very supportive girlfriend Christine. 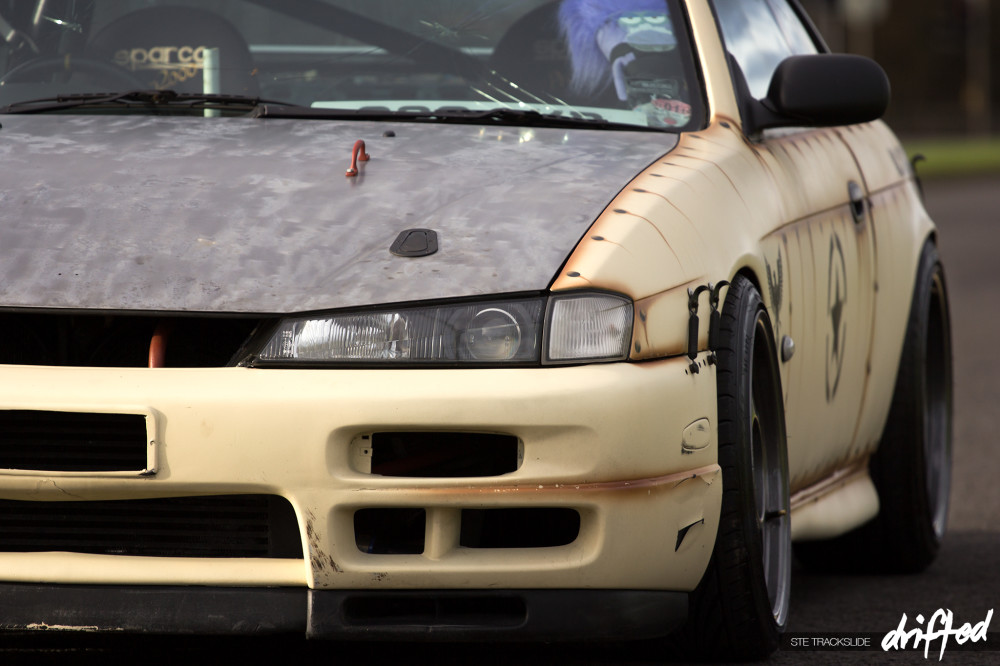 Once we were on location I spent some time just wandering around the car and the more I looked at it, the more things I spotted. Besides the paint job and the ‘home made’ rear overfenders, at first glance the bodywork looks relatively standard. Louis does have bodykit plans for the near future, but I won’t spoil the surprise. After a bonnet opening/windscreen killing incident a few weeks ago, a stock bonnet was fitted and stripped of its paint, exposing it to the elements in order to obtain the rusty ‘rat’ look which kind of ties into the current theme of the car, but it seems it’s taking longer to rust than Louis thought it would; Nissan’s definition of irony I guess… 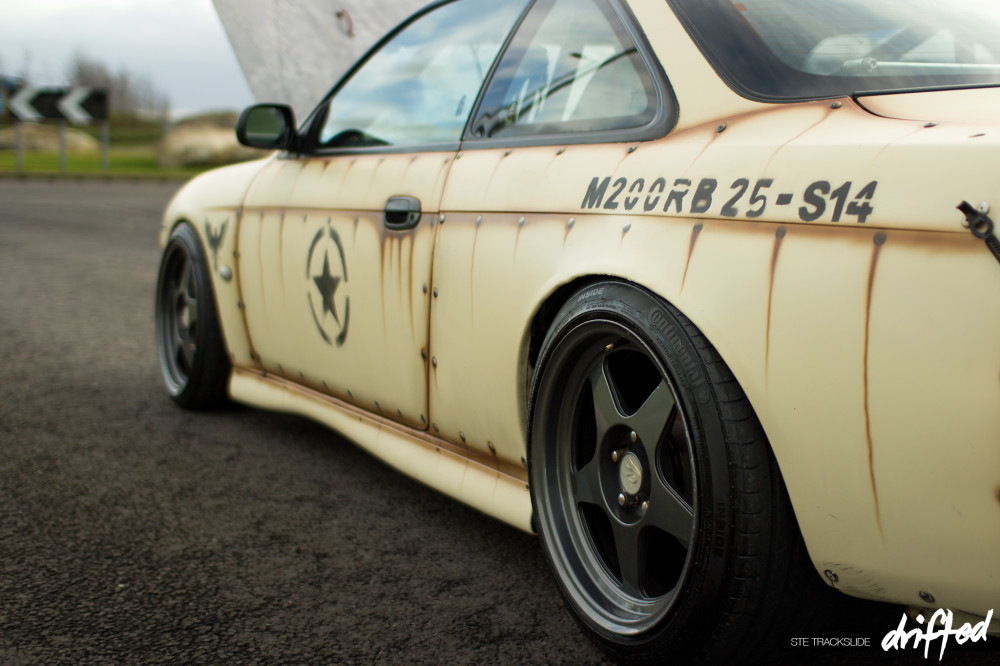 I realised upon closer inspection that Louis had painted the pop rivets he’d used to fit the overfenders in the same style as the rivets he’d airbrushed elsewhere on the car, a nice touch and quite effective.

Although S14a’s come with pretty good 4 pot brakes up front, Louis has opted for a very nice looking set of Brembo brakes from an R34 skyline, as well as the more popular Z32/GTST rear calipers at the back. Those front calipers look great behind the dark grey alloys. 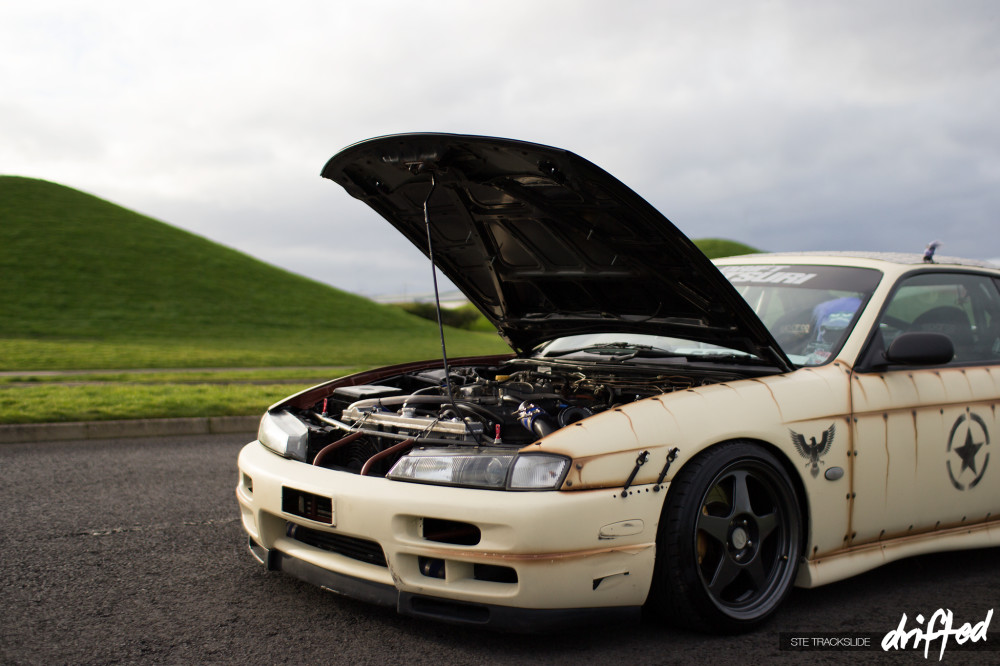 It was only when we popped the bonnet that you really get to see how much work has gone into this car, Immediately I noticed the RB25DET, but that was just the start. During the shoot the car was getting plenty of attention from passers by, which is standard for this type of car in an urban area, but once the bonnet went up a nice old man stopped his car and asked us if we needed a lift anywhere, assuming we had car trouble; what a guy. I’m sure there is a joke about a broken Nissan in there somewhere, but I’ll just move on…

The keen observers among you will probably notice the throttle body is now in a completely different location to where it’s usually found on a RB25; this was done also by A.R Developments to shorten up the intercooler pipework to counter some of the turbo lag, combined with a custom fitted Garrett T2871r turbo, it certainly makes for an unusual variant of this motor; it does the job very well.

The front bumper is easily removed for practice days so as not to get damaged and to also reveal the custom bumper bar fabricated by Ashley Neil of A.R Developments.

The interior is pretty much what you’d expect of a road legal drift car; a fire extinguisher, a hydro and an OMP steering wheel. 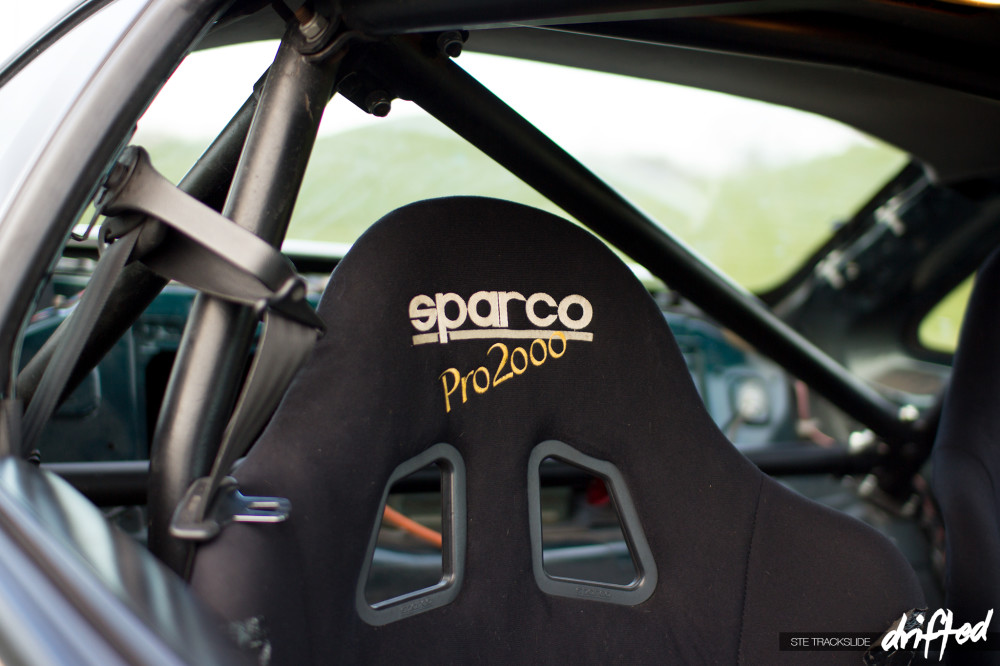 Climbing into a Sparco bucket seat while negotiating through a good rollcage may not be the most graceful of manoeuvres, but it certainly gives you a sense of safety and reminds you that you’re not in just another ordinary road car.

With all the punishment drift cars are subjected to, seeing a few gauges to keep an eye on what’s happening under the bonnet is pretty much a standard feature. Louis has made a custom plate to house his rather than bolting them to the top of the dash or A-pillar to keep things nice and neat. 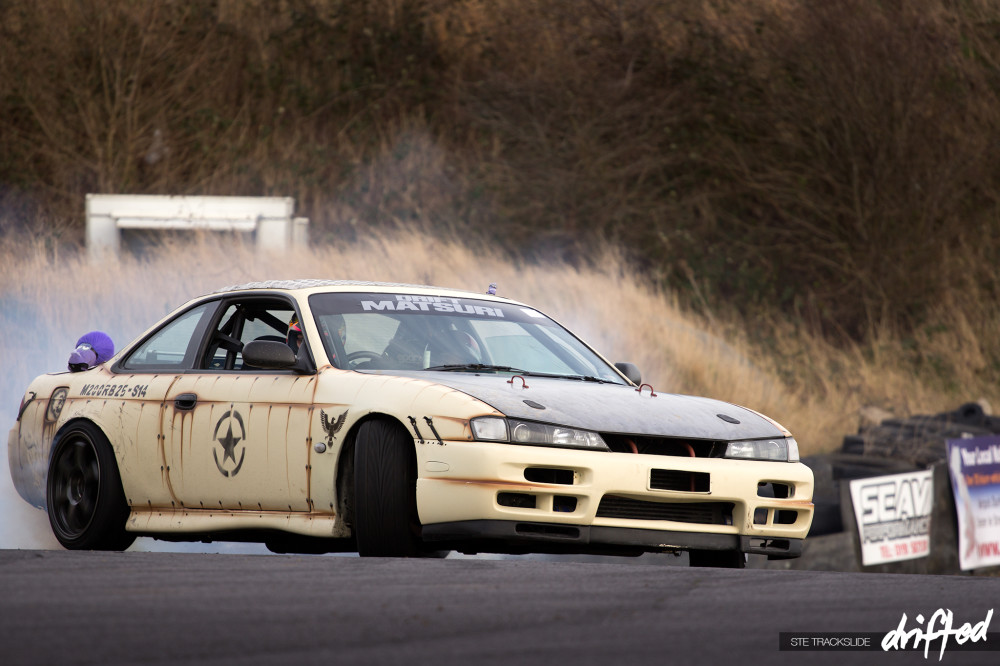 The next day we hit the track; Louis needed to set up and test the new Driftworks CS2 coilover suspension he fitted just a few days before which seemed to perform flawlessly from where I was standing. On a wet track the car was very quick with plenty of grip and pushing harder than most of the other drivers who attended. Plus you could always tell when it was on the way around the track due to that awesome noise you get from the RB. 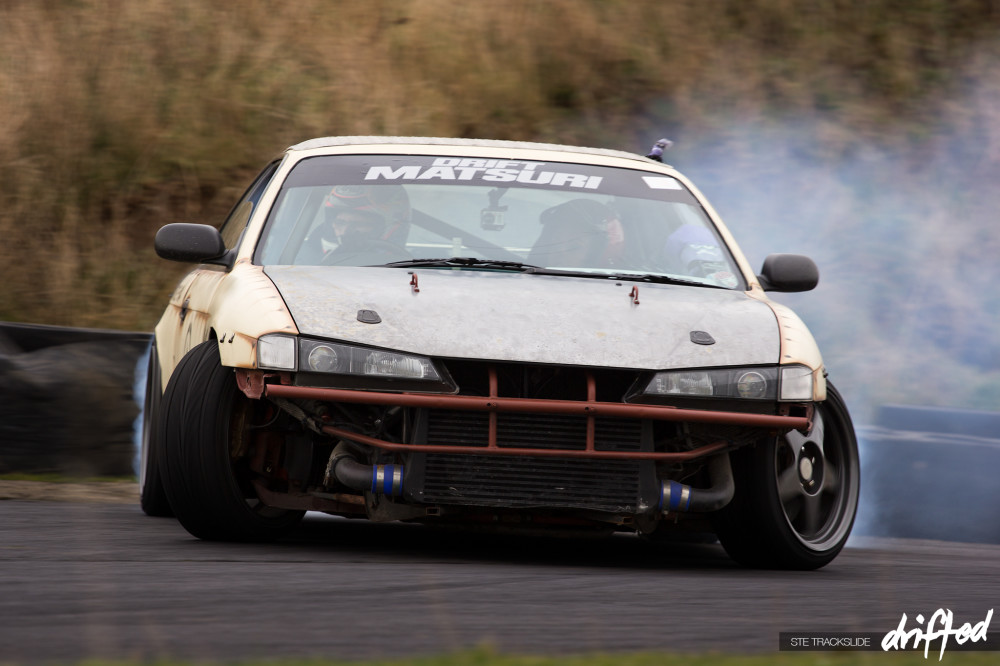 As the day progressed the sky stayed dull but the track dried out, allowing for more grip and faster entries into corners. Louis was really putting the car through its paces which was needed as he is attending the British Drift Championship license day at Teesside Autodrome on the 23rd of this month.

And that is Louis’s story up to this point. Good luck with the license day in a couple of weeks Louis and we hope to see you in the British Drift Championship this season.