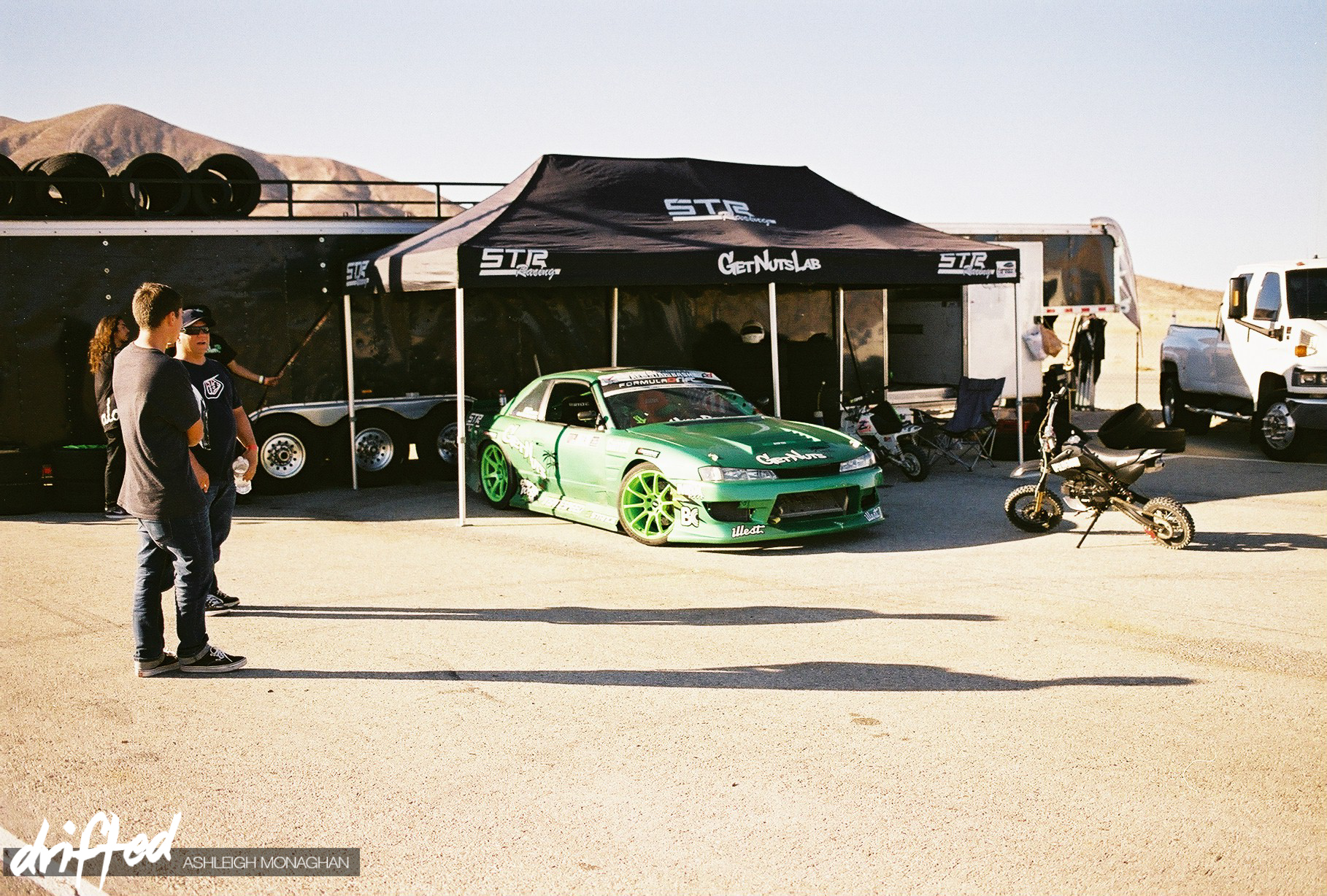 Oh how the times have changed. Sifting through my digital footage of Just Drift‘s annual All Star Bash weekend, I couldn’t help but let my mind ponder over how much photography has advanced since the 80s. Gone are the days of loading up film and listening to the new roll click through a camera body, of patiently striving for perfect light and composure, and of proudly holding fresh negatives up towards the sunlight – as if to show the photography gods our latest piece of raw work. 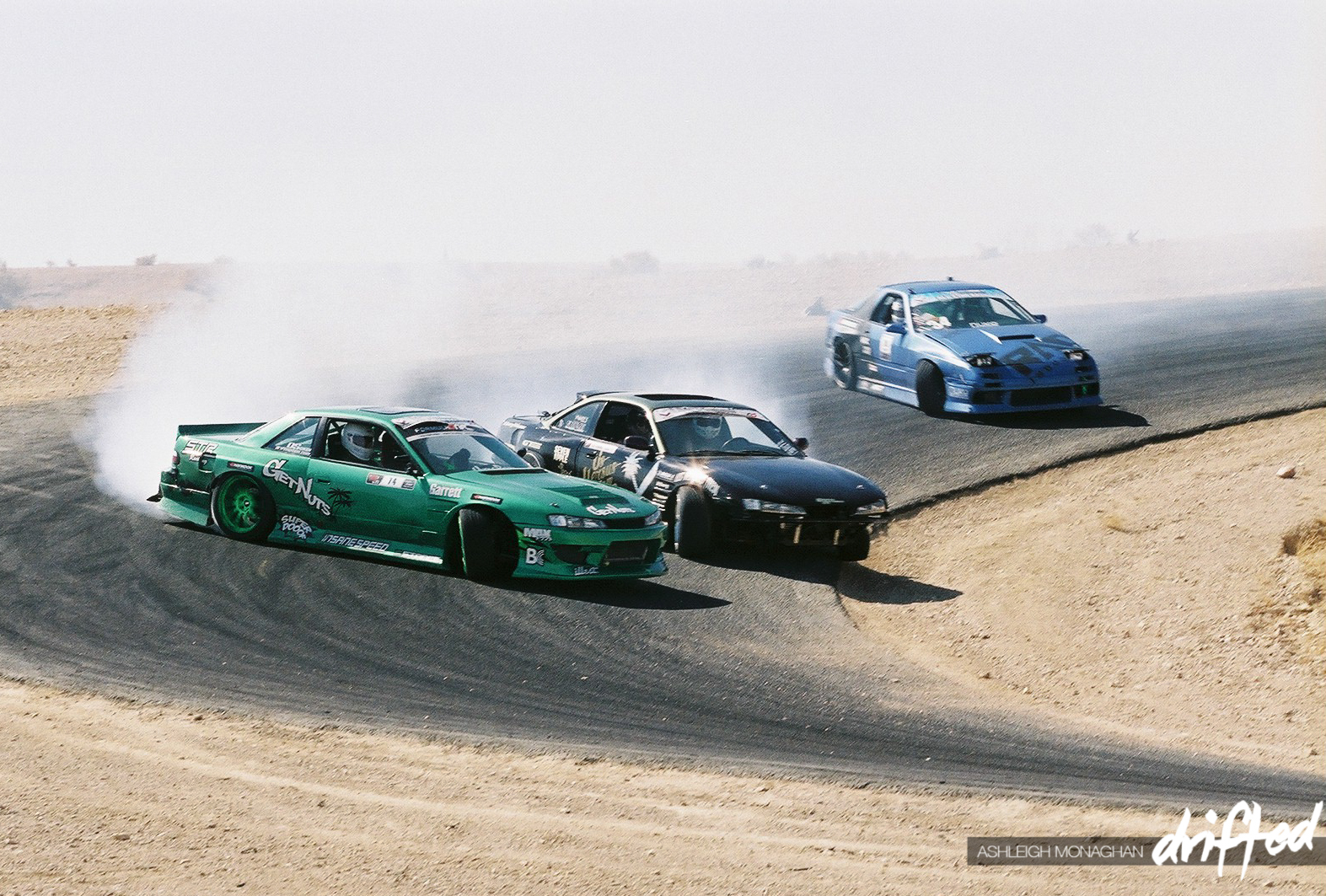 We take for granted the simplicity of our technologically driven age, and it is almost as if we have become ignorant to the difficulties that photographers encountered in the generations before us. After we pull out our fully automated, imaged stabilized and digitally enhanced cameras, effortlessly press the eye piece up to our face, hold down the shutter for what feels like a couple of seconds, review the resulting 20 odd shots before deciding we don’t actually like any of them and deleting them entirety – we fail to realize that not too long ago, those 20 something shots would equate to a full roll of film. Precious images. Photos that photographers would plan for, climb mountains for and potentially even play chicken with cars for. Shots that they prayed were money makers but would never see again, not at least until they were developed anyway. And if they didn’t like the result? Tough. 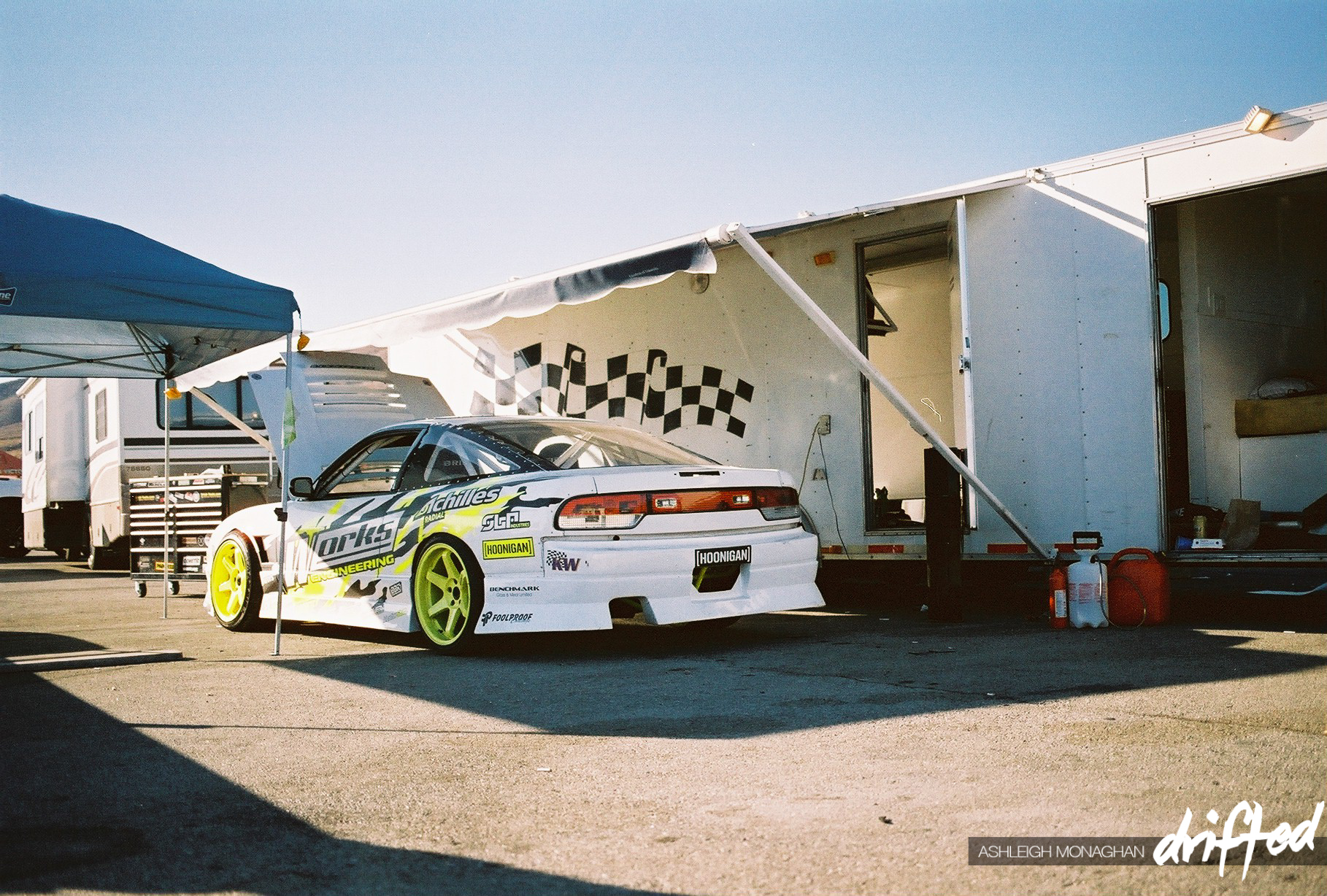 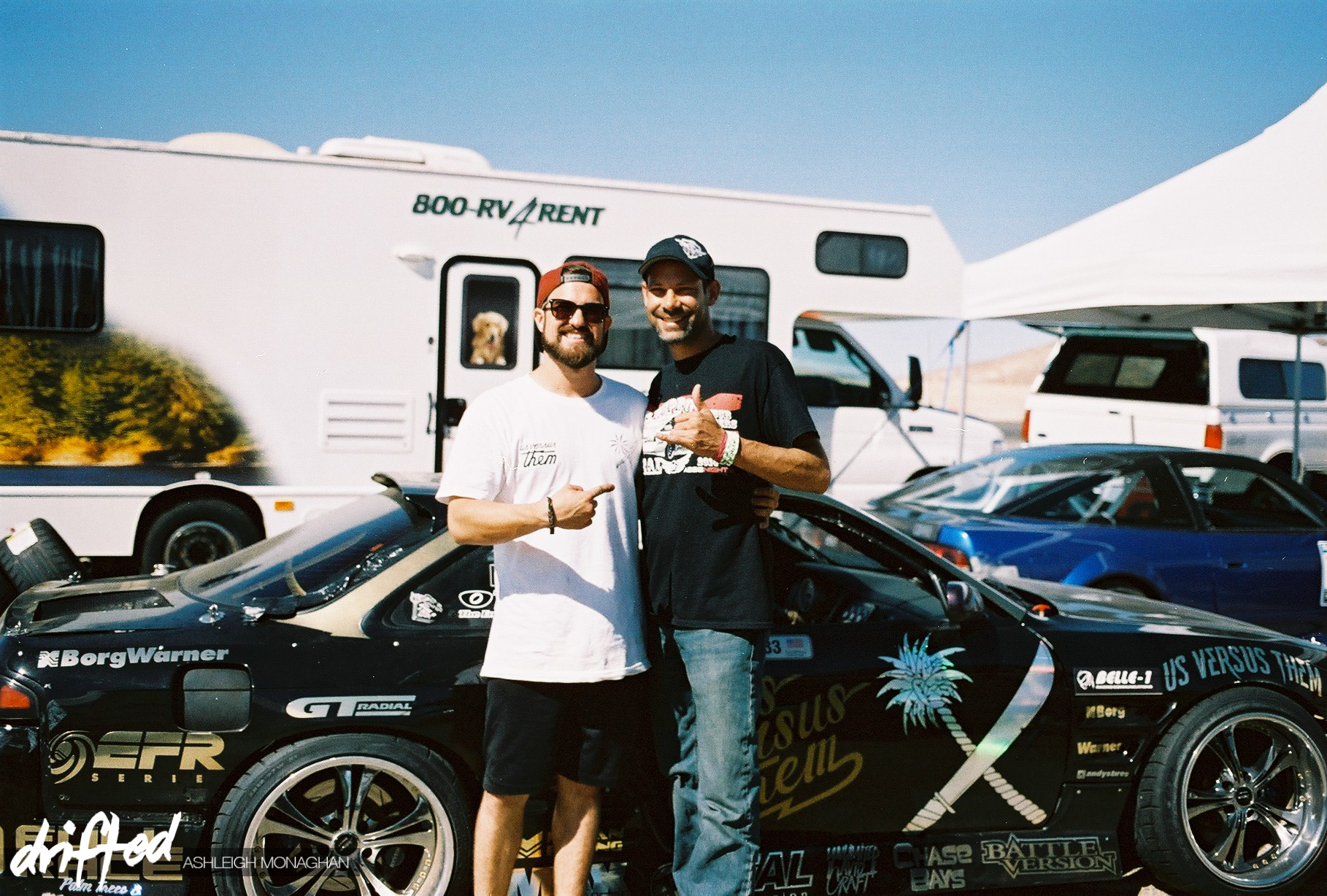 Now, I’m not implying that we’ve done it all wrong. No way! I love the ease, thank goodness for the advancements. However, nothing from the weekend felt more rewarding than whipping out my film camera and stealing a couple of plain old 35mm shots. Taking the time to capture moments of inspiration, growth and nostalgia is something that I feel film does perfectly – I was even lucky enough to snatch a moment with Ryan Litteral and Alex Pfeiffer, Litteral professing how much Pfeiffer had inspired his style and love for drifting as a young gun.

Of course, there were set backs. Images showing the wrong point of focus or naïvely taken in poor lighting conditions could easily be seen as a waste, but I like to take the same stance as drivers do after they scrape a wall – embracing imperfections. Did I also mention the time saver factor? Not a single shot was enhanced with editing software. 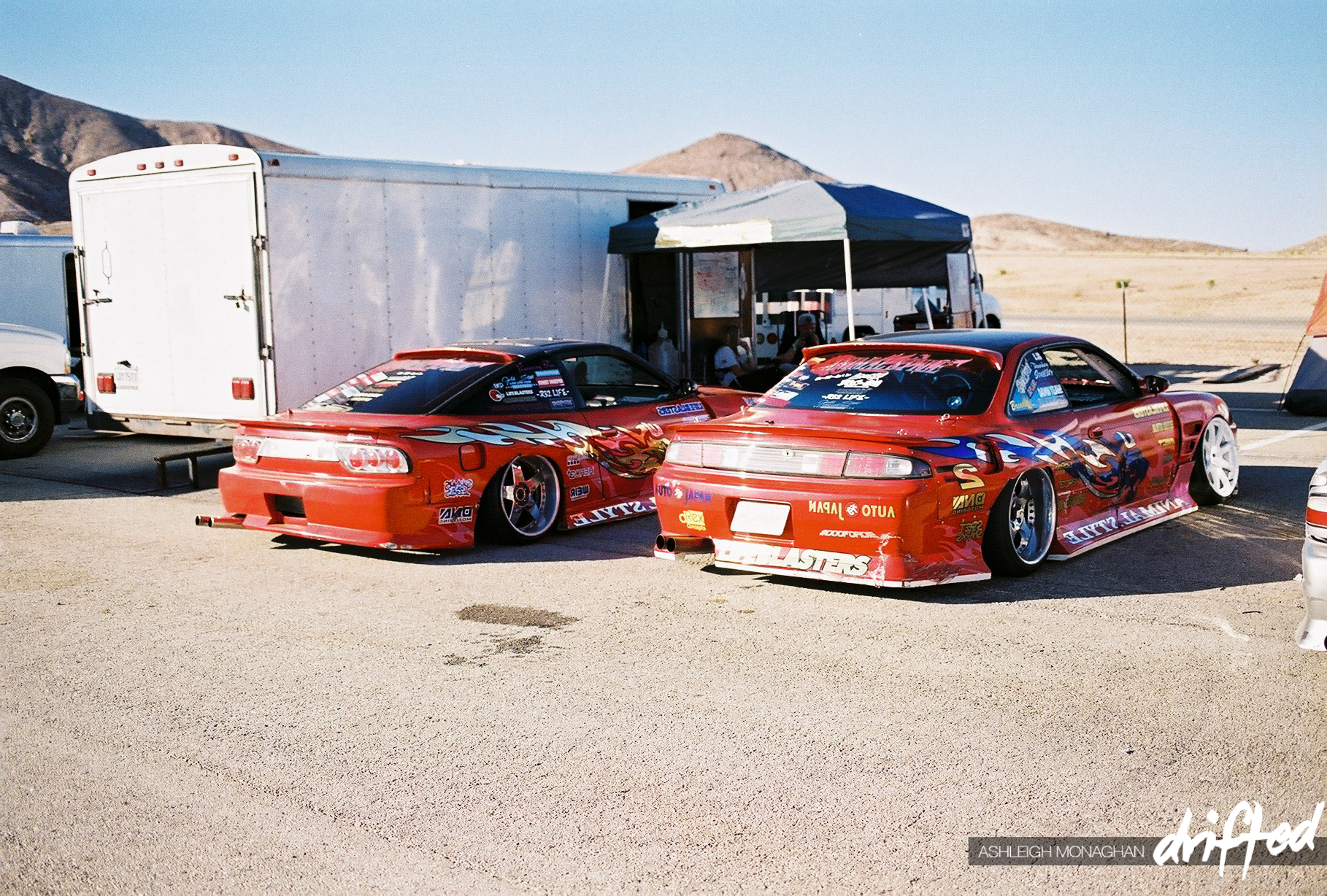 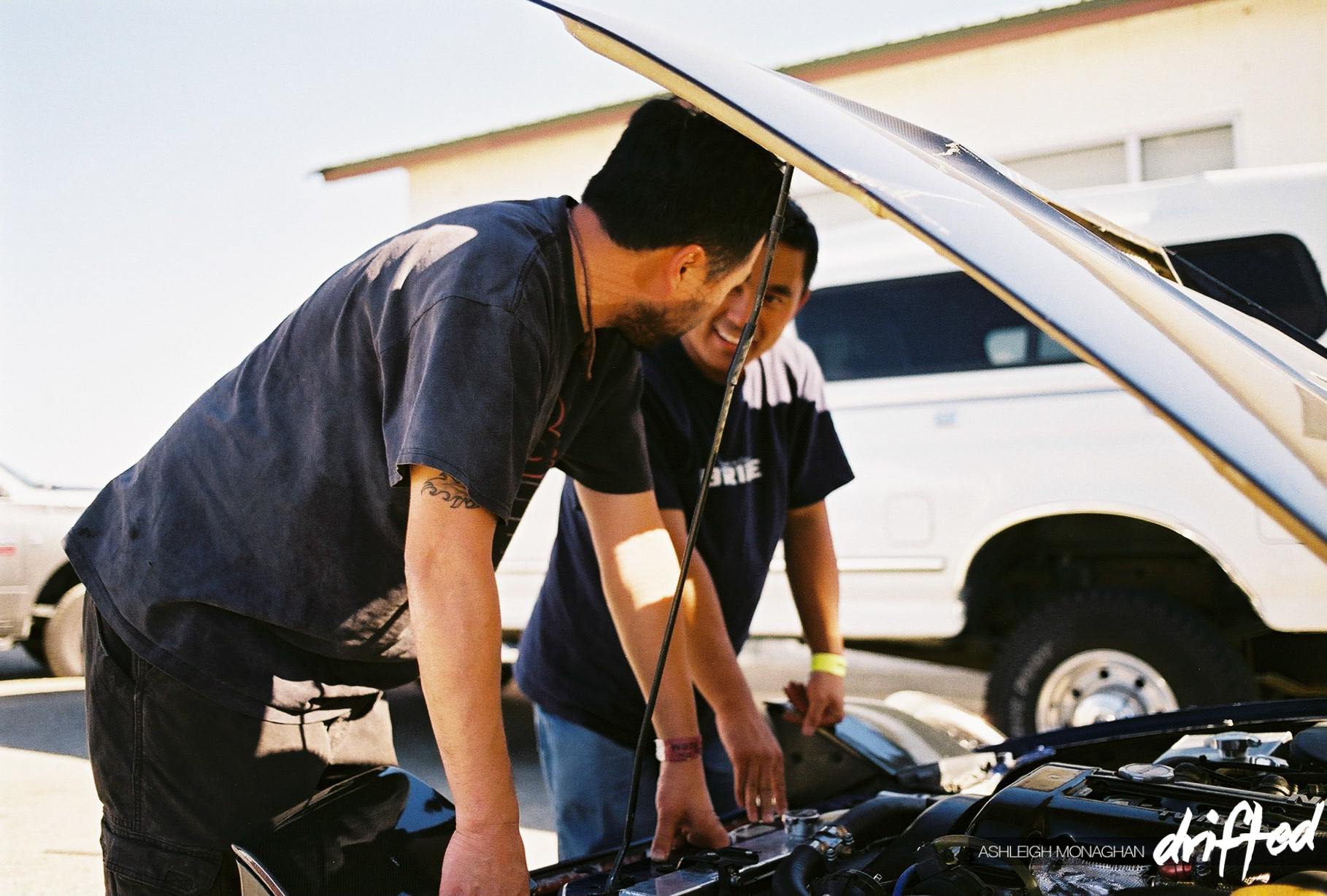 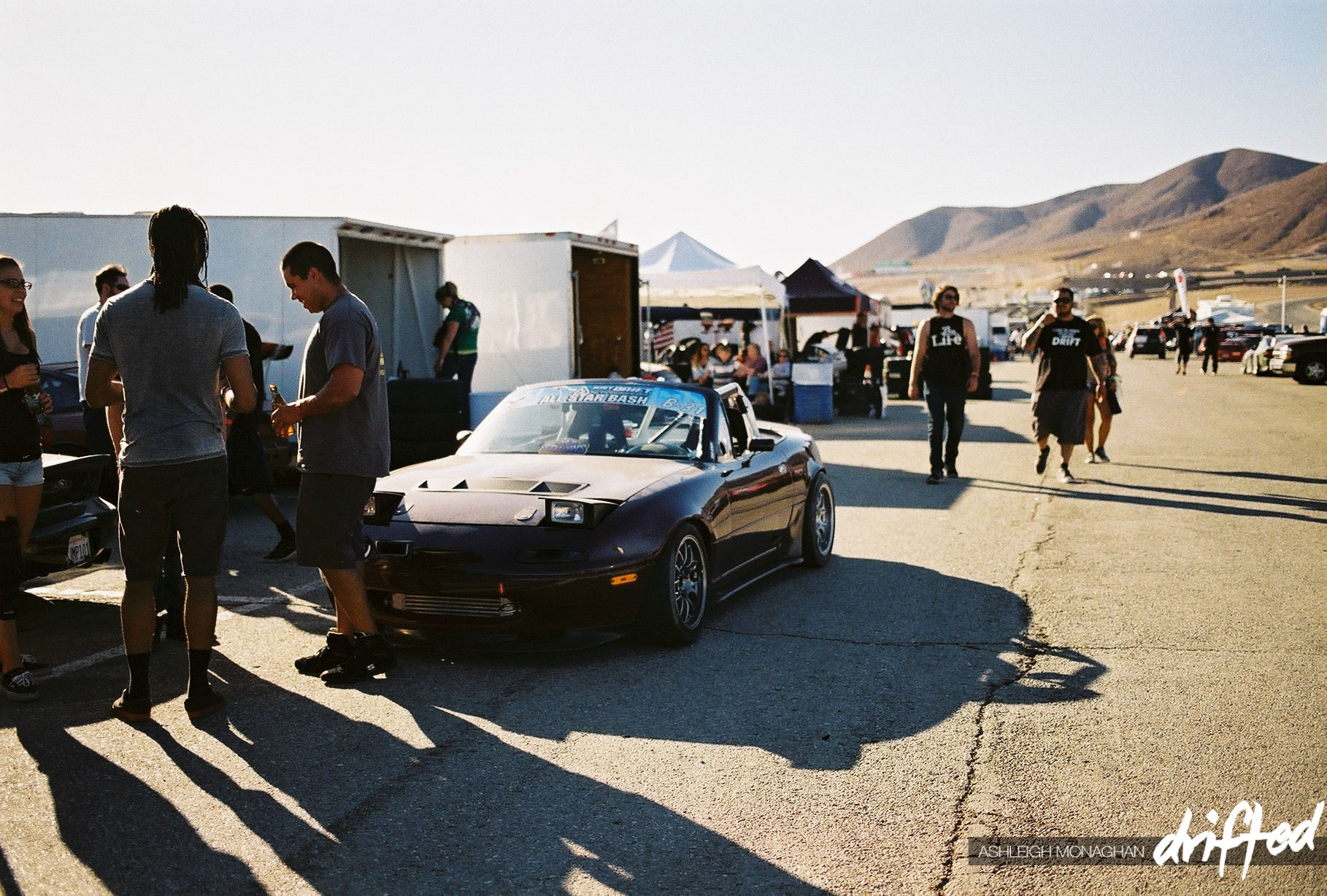 I can admit; I would have looked the fool lingering around the pit bays and impatiently waiting for the clouds to set in, or for crowds to disappear. Twiddling with an outdated camera I bought off the internet for $20, shuffling for what awkwardly seemed like hours on end before finally kneeling down and releasing the shutter. But as we photographers do, I wanted to shoot with some kind of meaning. Walking around with my beaten up camera gave me a little more incentive to capture what was beautifully exampled and lightheartedly shared because, just like my photos, I didn’t know when I would get to experience this exact atmosphere again. 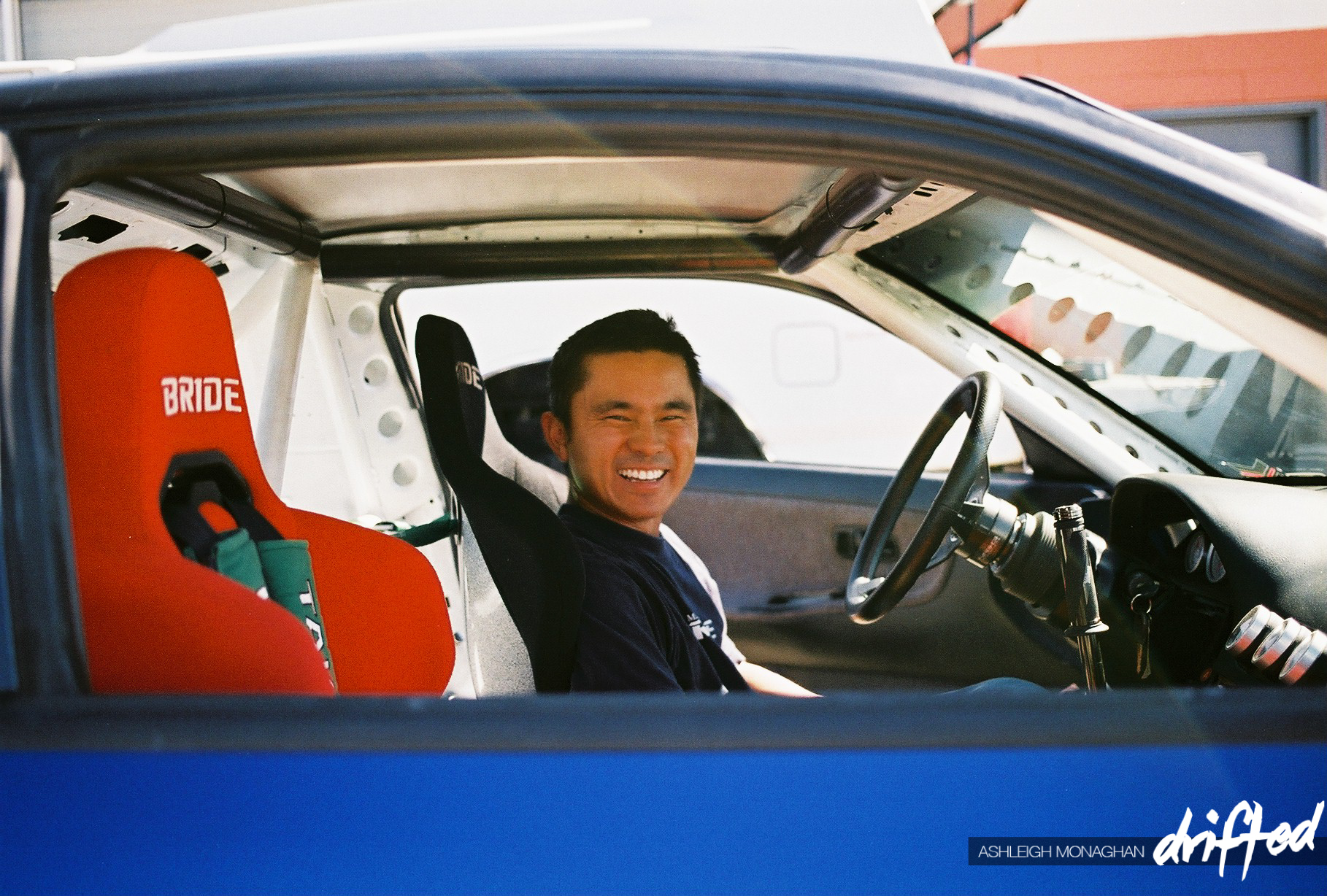 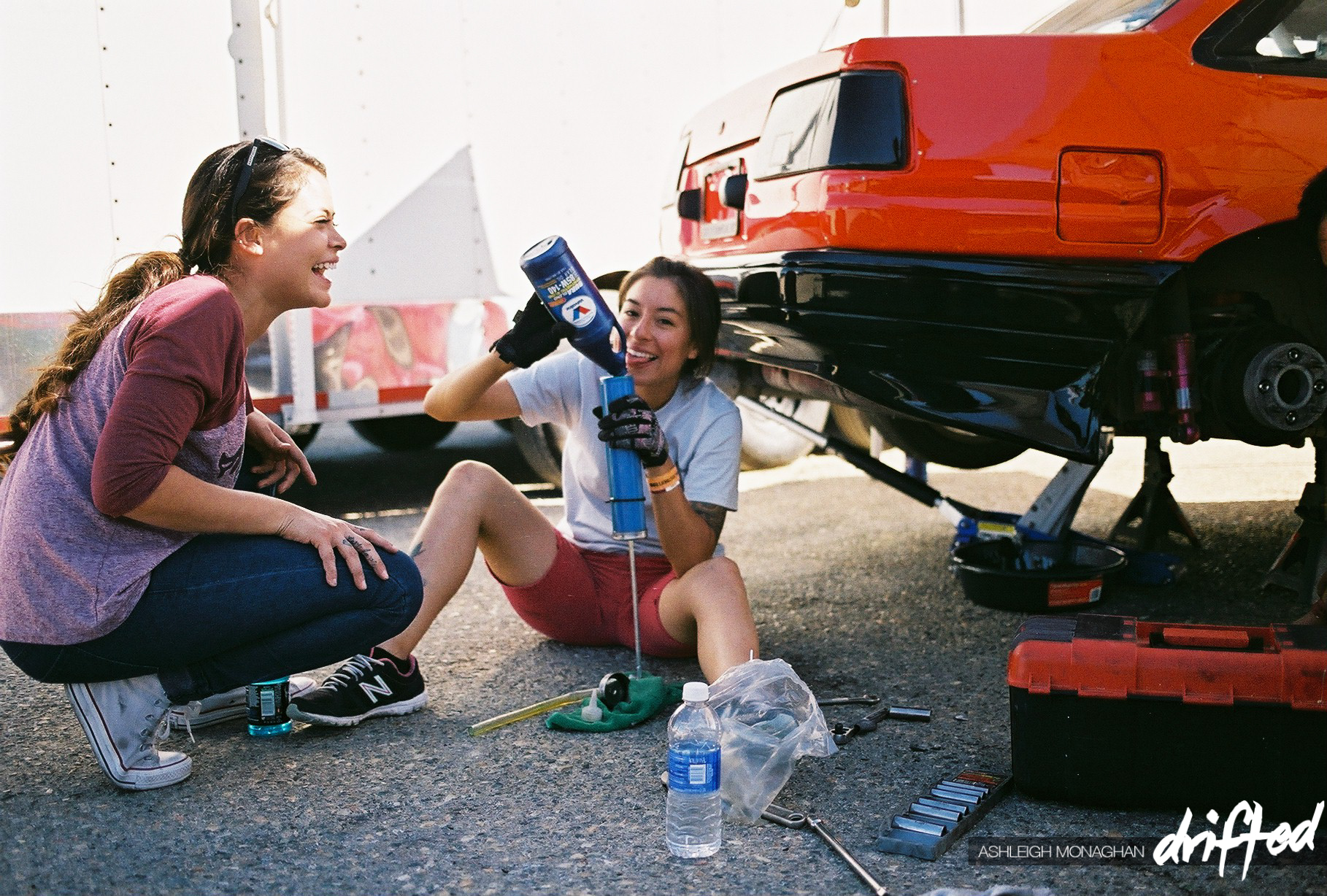 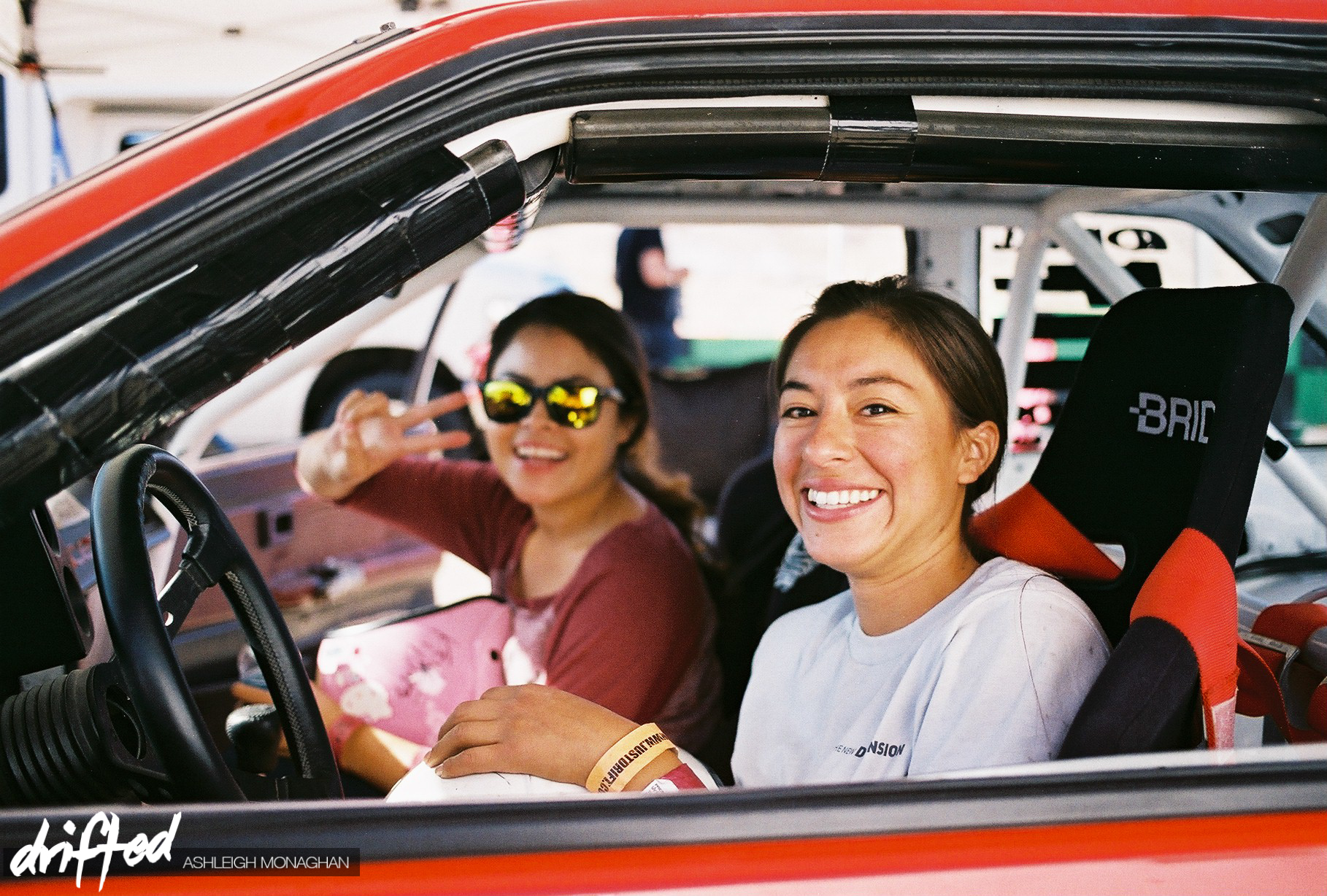 All Star Bash brings out the most unique, fun and carefree kids in the scene. Having never attended a Just Drift event in the past, I was absolutely blown away with how welcoming and energetic every single person was. Whether they were fellow media, drivers or simple spectators, I’ve never felt so comfortable approaching someone to say hello. Naturally, their joy trickled onto several shots, and it is in these moments that I can understand why the event grows each year. 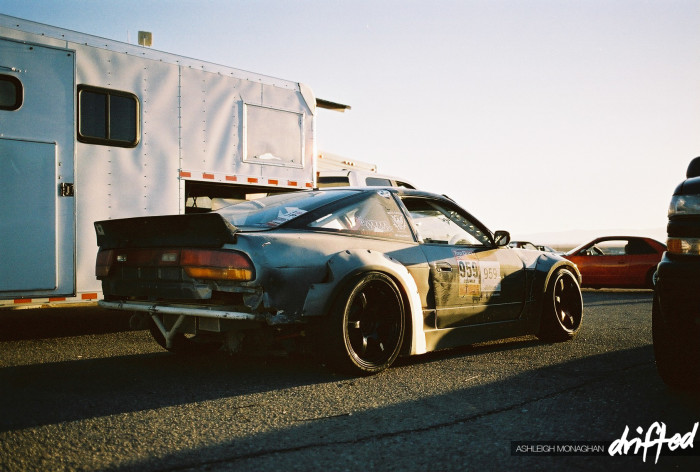 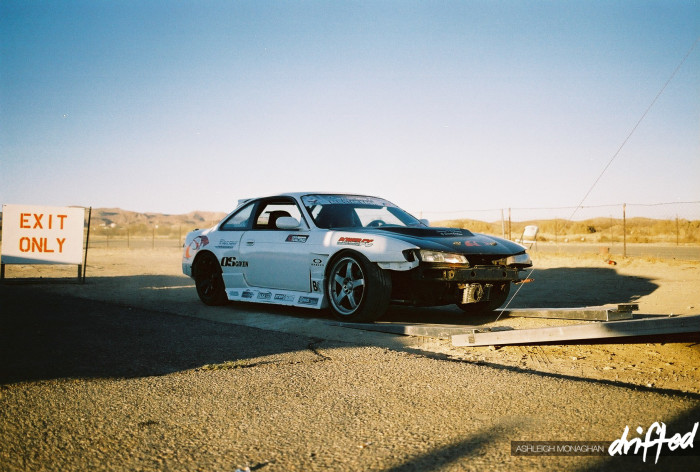 As the weekend came to an end and the sun began to set on the cars, I felt a little more excited to get home and head to the store to develop my shots. What’s more, I had already forgotten half of the images that i had taken. Finishing off my roll of film on those packing up, I finally tossed aside the camera and decided to lend a helping hand.

Leaving All Star Bash on what must have been their legendary high, I thought of the immense amount of organisation that would have gone into a two day drift event like this. Props go out to Charlie and the Just Drift crew for one of the most memorable drift weekends I have ever attended – you guys do it fantastically. Oh, and for all of the photographers out there: If you haven’t already purchased a film camera, do it! I promise you that you won’t regret it.