Welcome to Brendan Stone’s s2000 drift car build for 2011. Brendan, an ex Irish Time Attack champion tried his hand in the Irish Prodrift series in a loan car last season and has clearly got the drift bug as he embarks on this build of what is now one very bare Honda s2000 shell.

Brendan has stripped the shell down to it’s core to seam weld the chassis and prepare the body for the new changes it will go throughout the build. For example modifications have been made for the driver’s seating position, modifications will be required for the cage and much more. The plan is to bring the full build to Drifted, I will update this blog in the several stages of its build as it happens.

As you can see the shell has been completely stripped down to the bare essentials, giving Brendan a fresh base to start from. 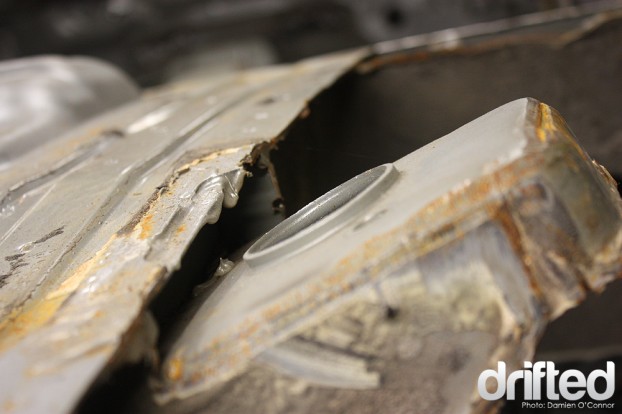 Brendan is planning to utilise a much stronger Nissan GTR rear end on the Honda chassis. This is going to include some serious modifications to the rear suspension mountings.

Although originally home to the high-revving VTEC F20C lump, this has been removed to make way for a high powered  RB motor from the Nissan Skyline series.

Mounting of the new engine will be crucial in this huge bay for weight distribution. The F20C motor sits behind the front suspension mounts as standard on this car, this is a key feature in the fantastic handling the S2000 offers from the factory. It will be interesting to see how well Brendan manages to maintain that perfect 50:50 weight distribution when the RB lump is dropped in.

The under side has been cleaned of all its unwanted seals and excrement and seam welds have been made to strengthen the chassis.

Honda’s ‘X-Bone‘ chassis on the S2000 was well known for being one of the most rigid roadster chassis in production. In this frame construction, the raised center tunnel features a strong boxed-type structure that connects to the front and rear side members in a single horizontal plane. Furthermore, completely straight front side members are connected to the floor tunnel, sidesills, and floor frame to form a “three-point support structure“. Impact load is efficiently distributed, resulting in an open body with rigidity and collision safety equal to that of a closed body without the weight penalty inevitable until this design was penned.

The standard S2000 utilises a fully Electronic Power Steering System (EPS). Although ideal in the road car, Brendan’s car will require something a little better suited for the steering feedback, speed and lock required in drifting. This RX7 steering rack will be used up front with the existing Honda front frame.

Brendan is making good progress on the seam welding of the chassis.

This picture isn’t really descriptive of any part of the chassis per say, buy don’t you just love that MK1 Escort sitting in the background ?

A rear projection picture of the Kevlar-backed seat mounted in the bare shell. There really isn’t much to the chassis with everything stripped down!

You’ll have to use your imagination here as to what the cockpit will look like upon completion, but for me that’s the joy of builds like this, everyone will have a different view of what the finished article will or should look like for that matter. In any case it should be good to look back on these pics as Brendan progresses his build.

The car has now been transported to Brendan’s workplace: TDP where work on the cage has begun.
Look out for further build progress in the coming weeks!

Want to boost the performance of your S2000? Then check out our S2000 supercharger, turbo kit, exhaust and coilover guides.