Before the D1GP 2012 season gets into full gear in a few months, fans could catch a preview of the kind of action they can expect to see this year at the annual kickoff event
during the Tokyo Autosalon. 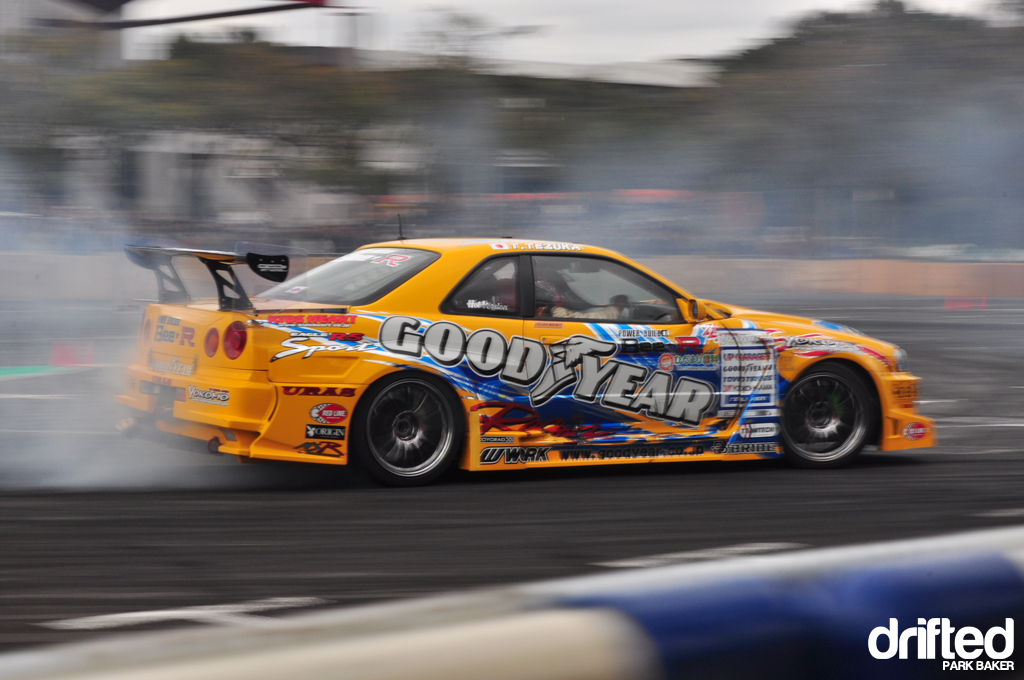 Held on a tight makeshift course in the convention center parking lot, it was a great chance to see the top drivers showcase their skills and go head-to-head in some friendly tsuiso battles. The crowds of people that made it out to Saturday’s exhibition were greeted with mild weather and a healthy dose of fresh tire smoke. 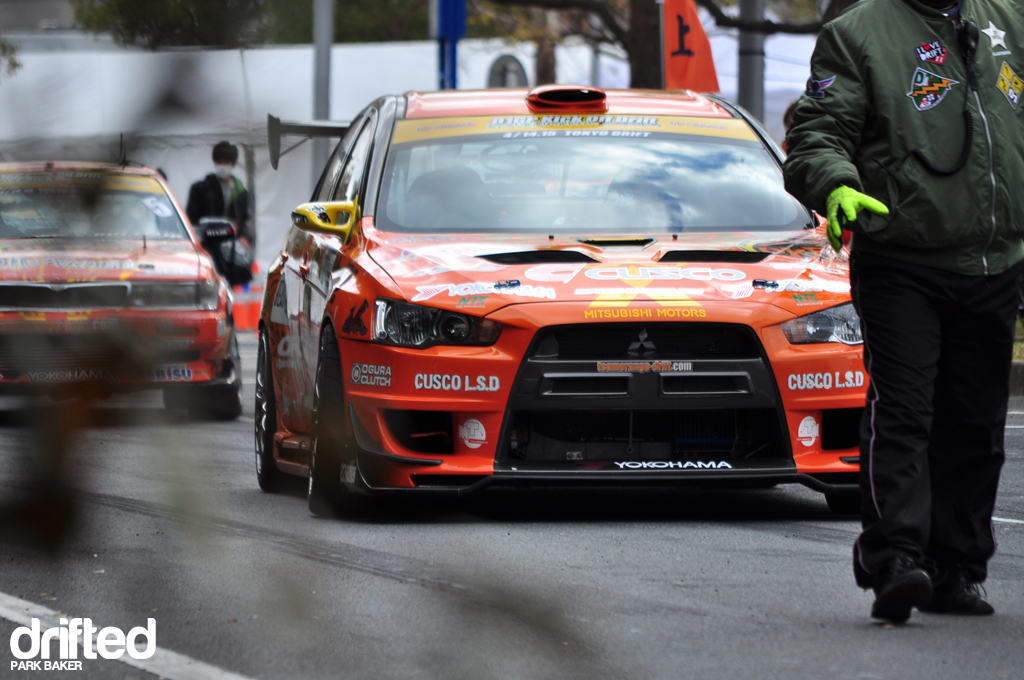 Prior to the exhibition’s main event, Team Orange was on-hand, providing some entertainment to warm up the crowds. 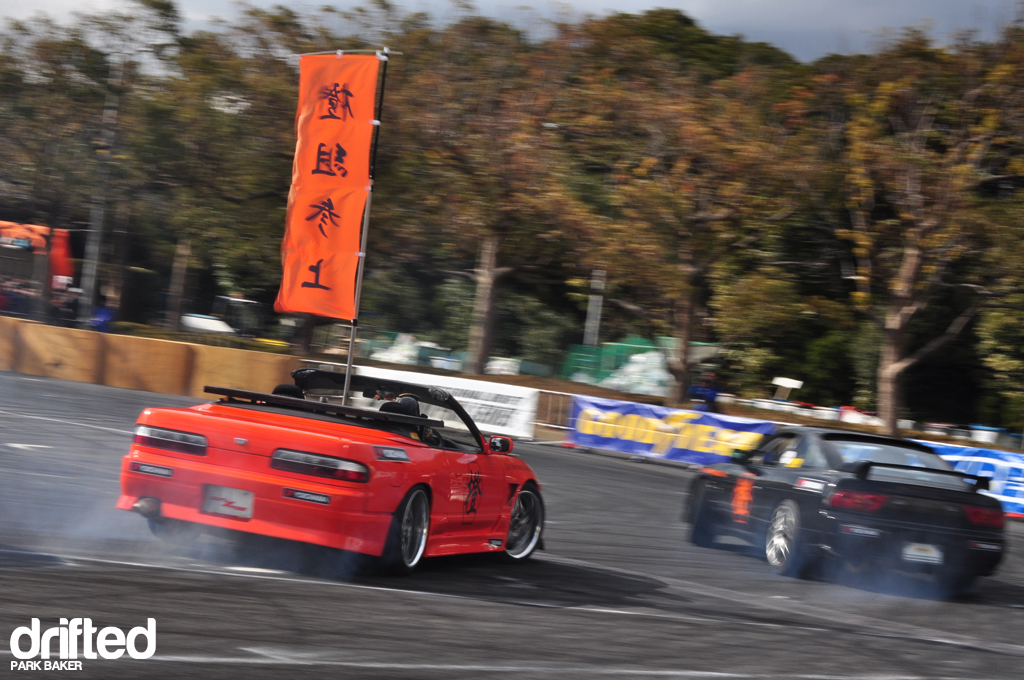 They brought out three S-chassis demo cars to for a unique and exciting performance.

Members of the event staff and organizers were also quite busy keeping all the entertainment on schedule. 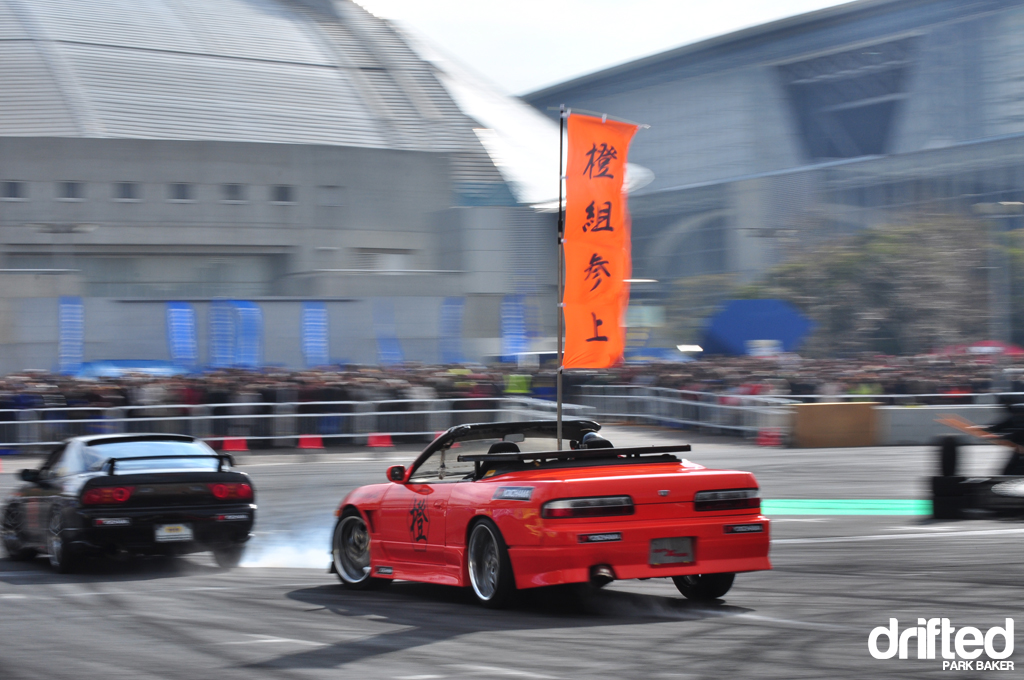 Team Orange’s demo really got the crowds into it, featuring precision driving, electronic music, and….

It was actually quite entertaining, as all three Team Orange demo cars “battled” a clan of ninjas. If you follow the action up at Ebisu circuit, you may have seen these guys practicing and perfecting the show on Ebisu’s driftland live webcam in the weeks leading up to the Autosalon. 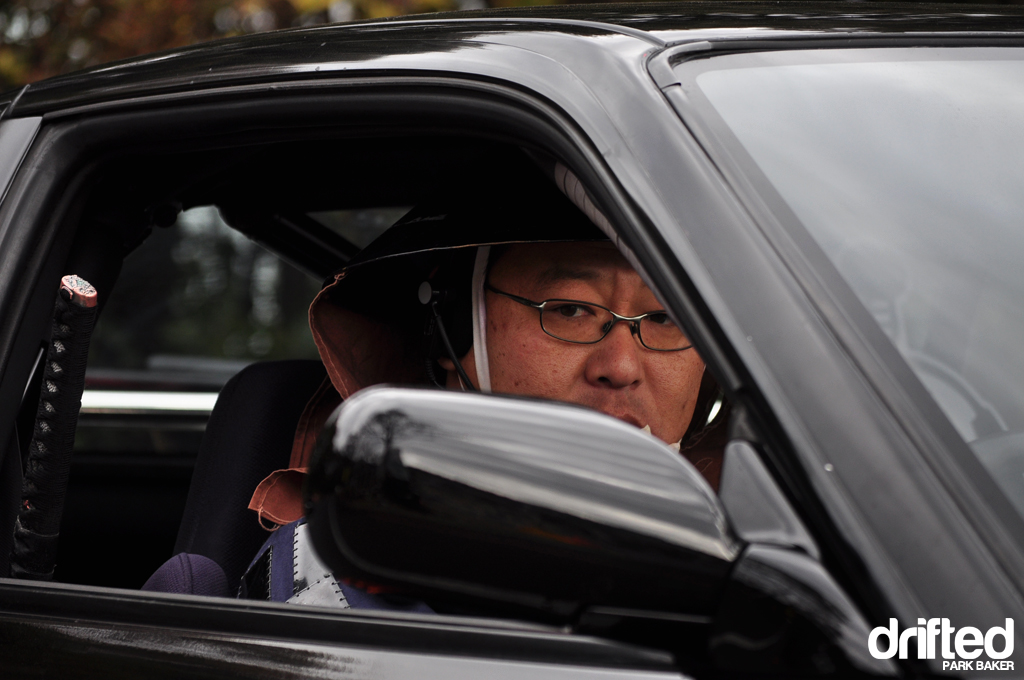 Even Kumakubo was dressed for the performance. The samurai sword is a nice touch. 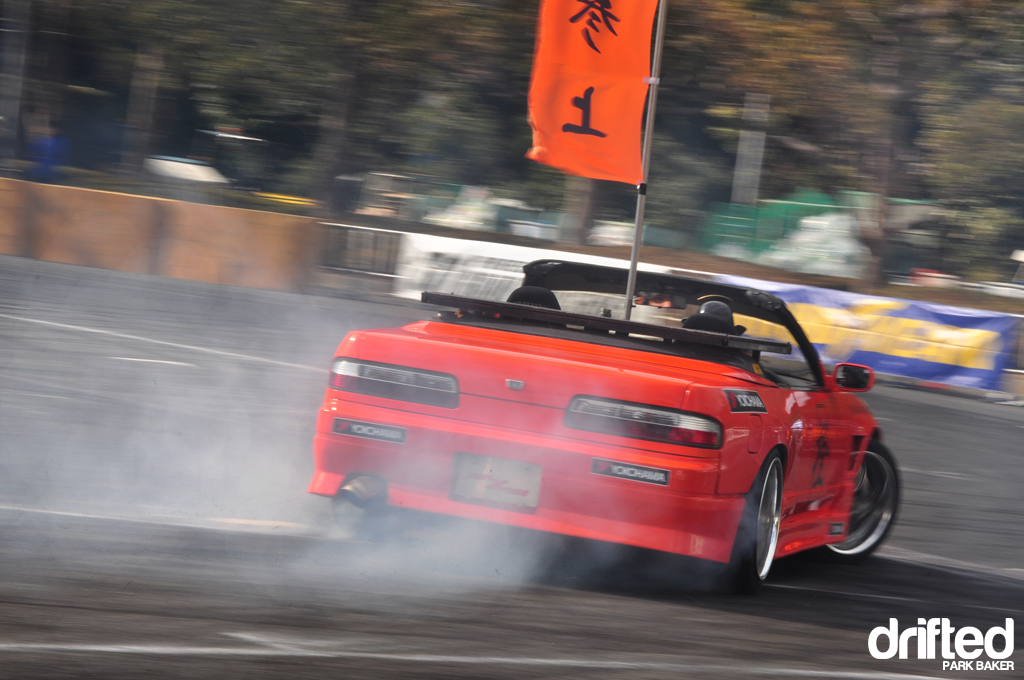 The crowd was really into the story, and excitement levels were high as the actors jumped over and “fought” the cars as they sped between them.

Here, Kumakubo and Suenaga prepare to join the action. Careful timing was needed for the show, so they used microphones to communicate during the performance. 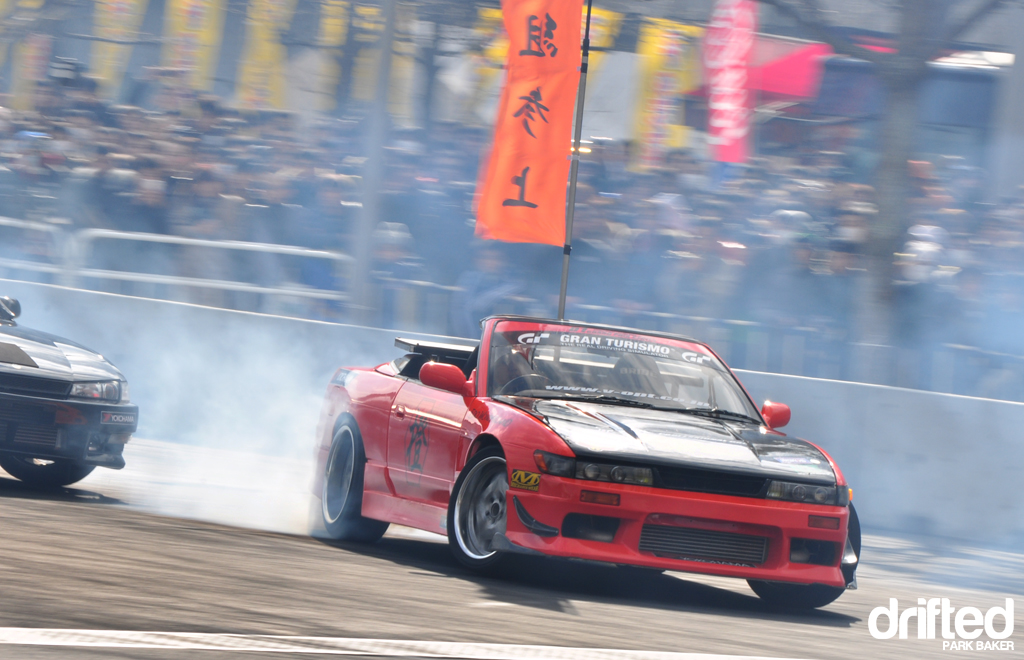 Although the area was pretty compact, there was still plenty of sideways speed on display. 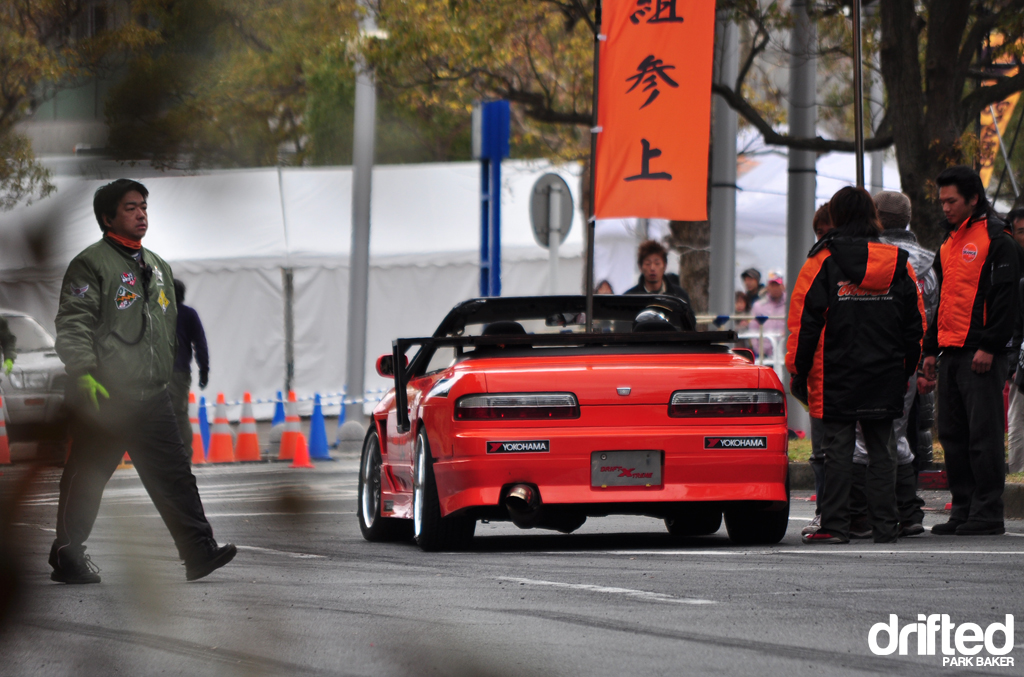 Since the Autosalon was a three day event, if you missed part of the show you could be sure to catch it from another angle the following day. 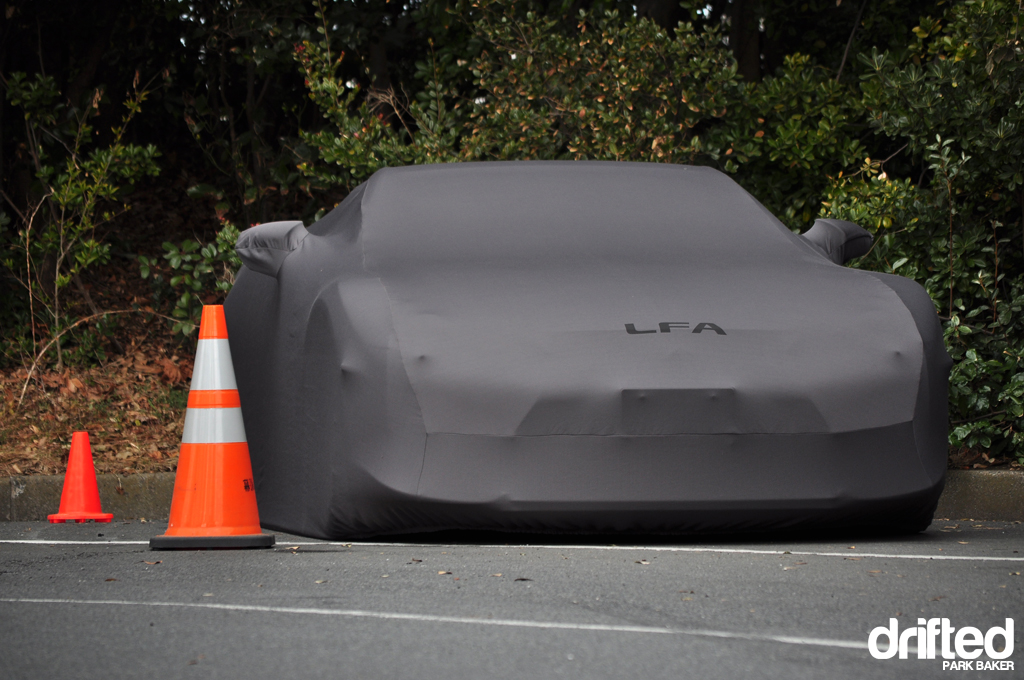 Hmm… What could be hiding under here? 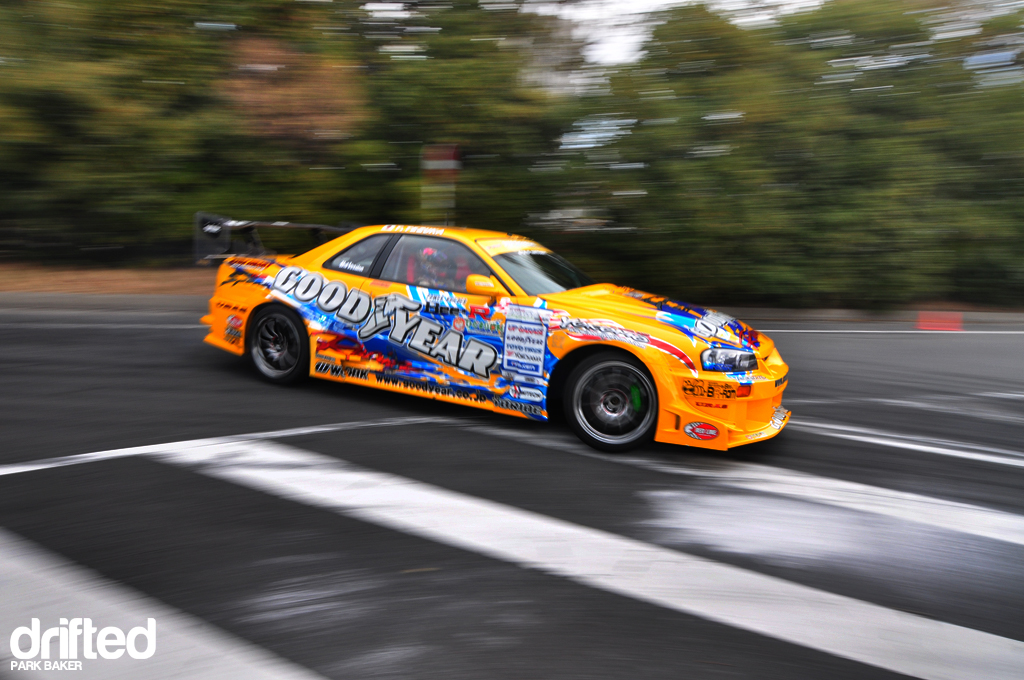 After the energy level was upped by Team Orange, it was almost time for the main event. First the drivers each had a quick run around the course. Tezuka hammers out of the staging area in his new Bee-R R34. 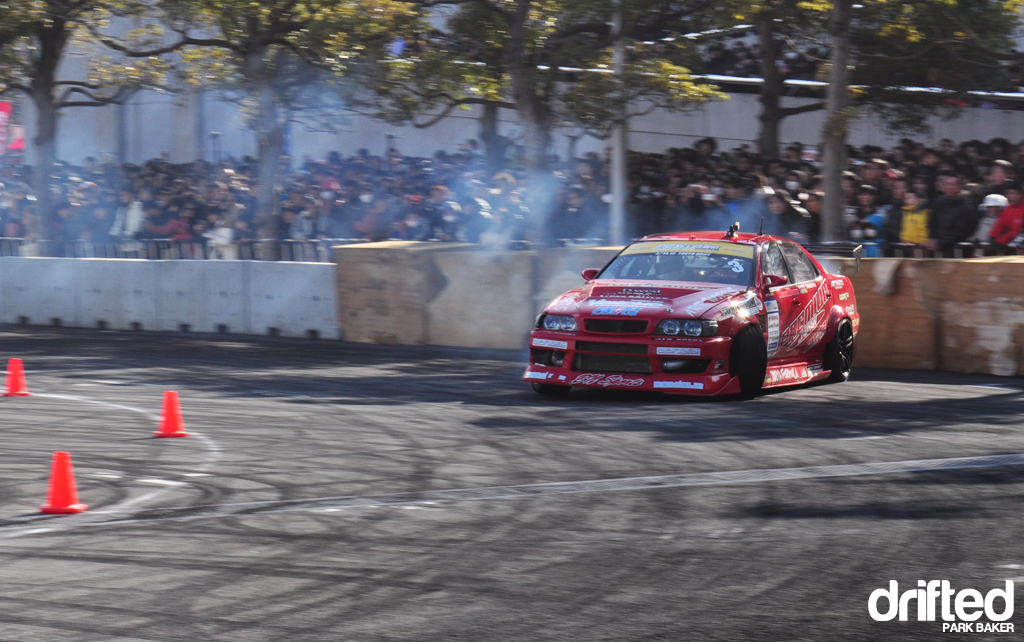 Always a crowd-favorite, Daigo Saito didn’t fail to impress, making the most of the course’s cramped quarters and getting plenty of angle right off the bat in his JZX90 Cresta.

Of course, the main draw for a lot of fans was to catch the debut of Hibino’s FT86.

The bright blue and green Falken livery seems barely recognizable beneath the yellow swirl and numerous sponsor logos, but overall the look is pretty good.

The response from the fans was positive after a few quick laps around the course. 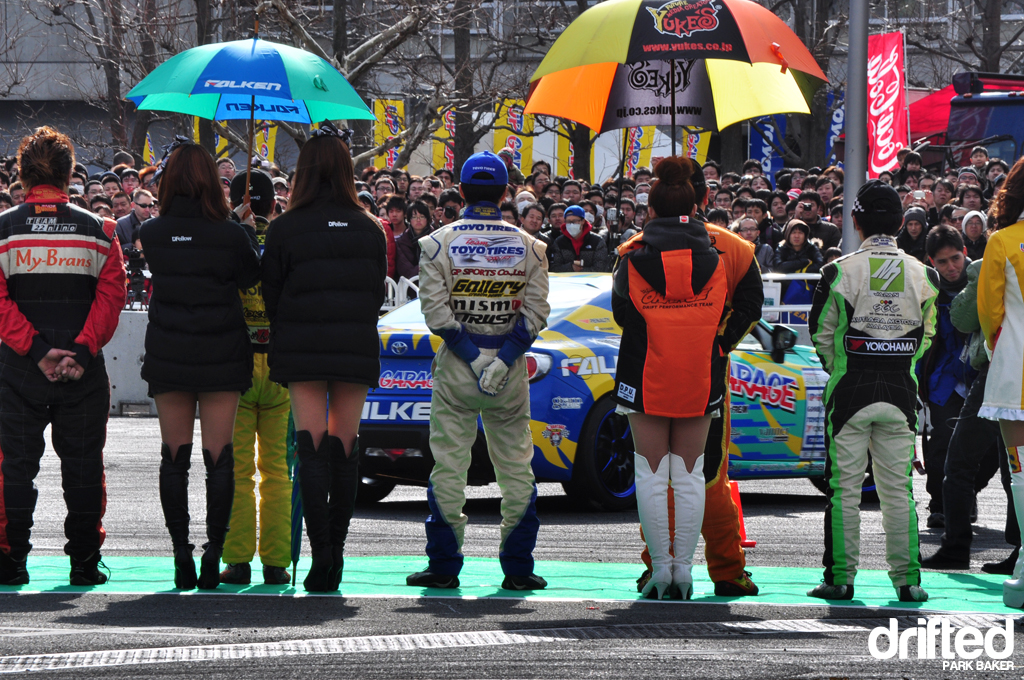 The drivers all lined up for quick introductions and a bit about the upcoming season. 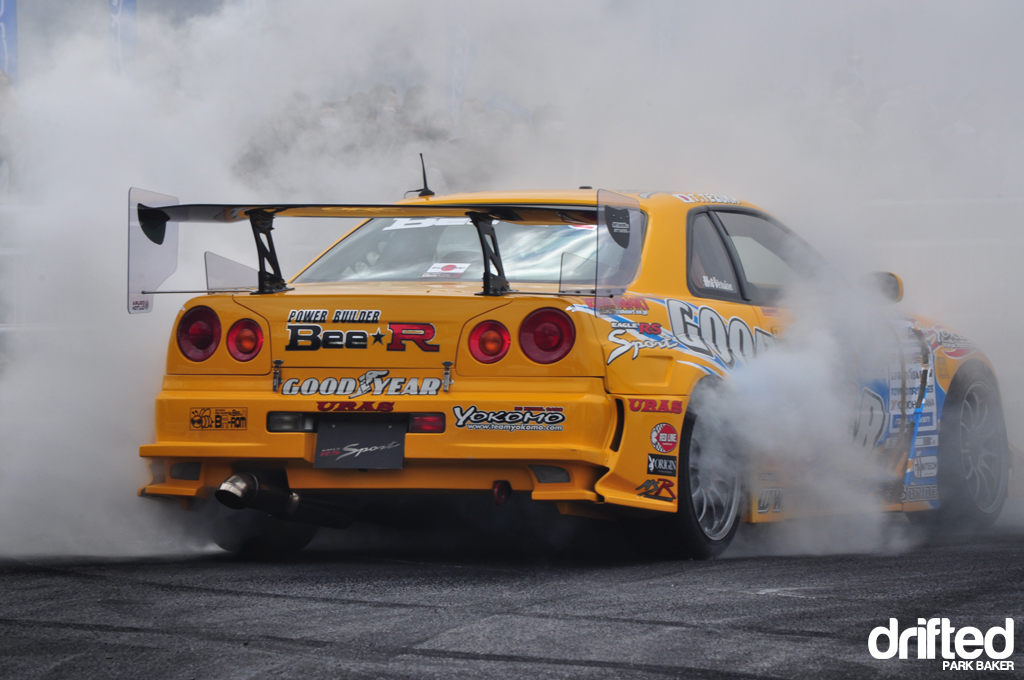 Then it was time to warm up the tires and get into action.

Other D1GP drivers made an appearance in the exhibition as well, including Masayoshi Tokita in his GRS184 Zero Crown.

Hibino stuck with his trusty AE86 for the exhibition. Here it is getting a few final adjustments before the battles began. 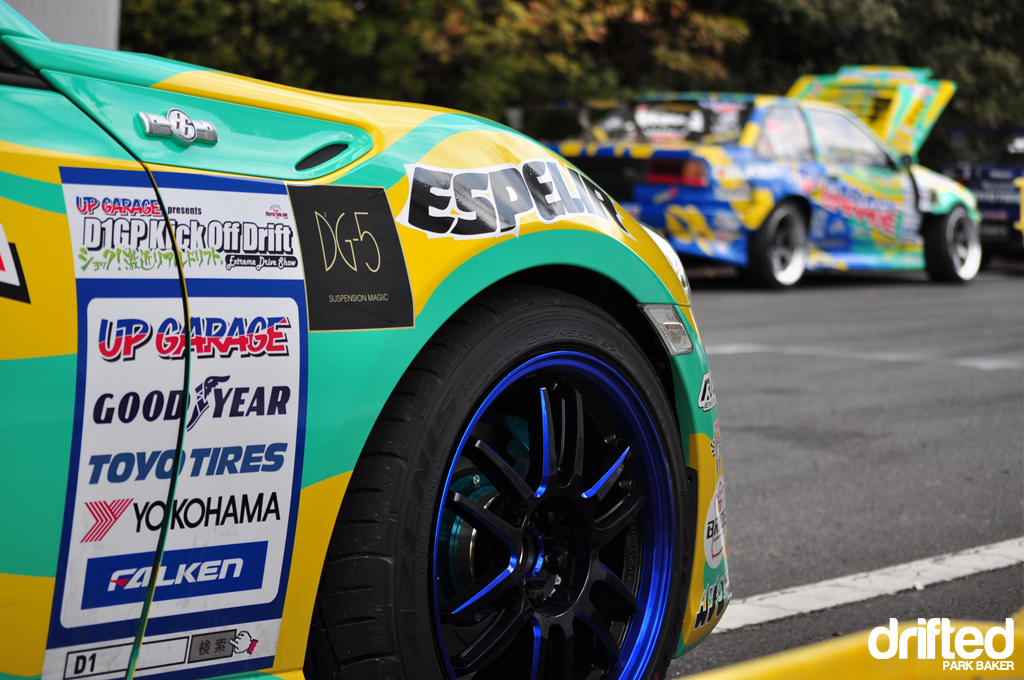 While the new machine sat in wait on the sidelines. 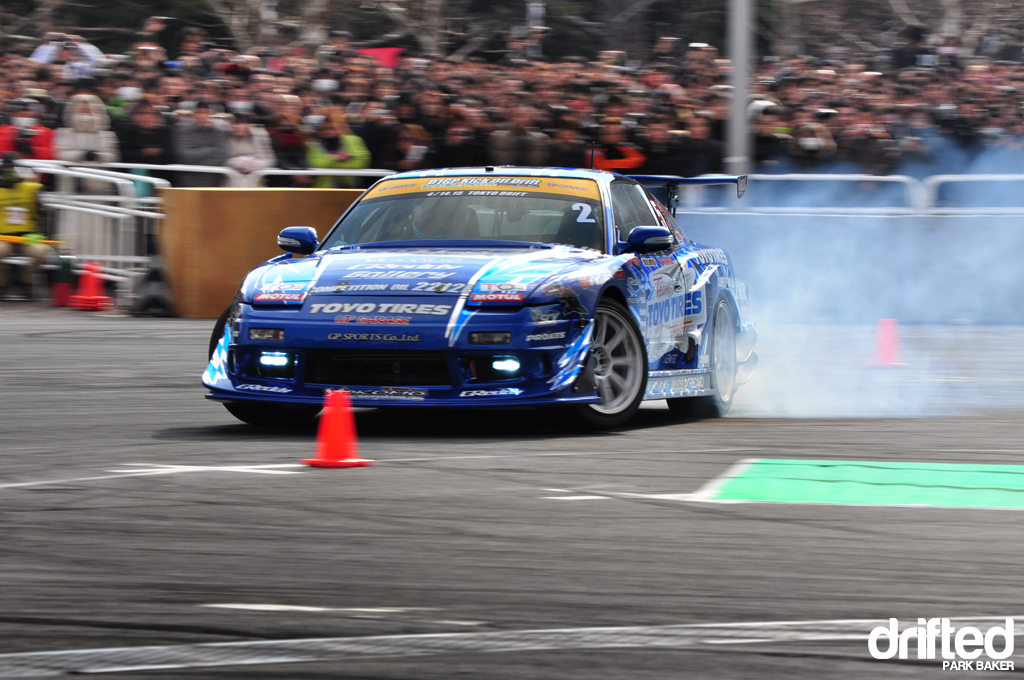 Kawabata didn’t have much space to show off those infamous high-speed rear entries, but got plenty of slide in on his warm up.

Tezuka getting into the groove.

Kumakubo pushing the Laurel around the course. 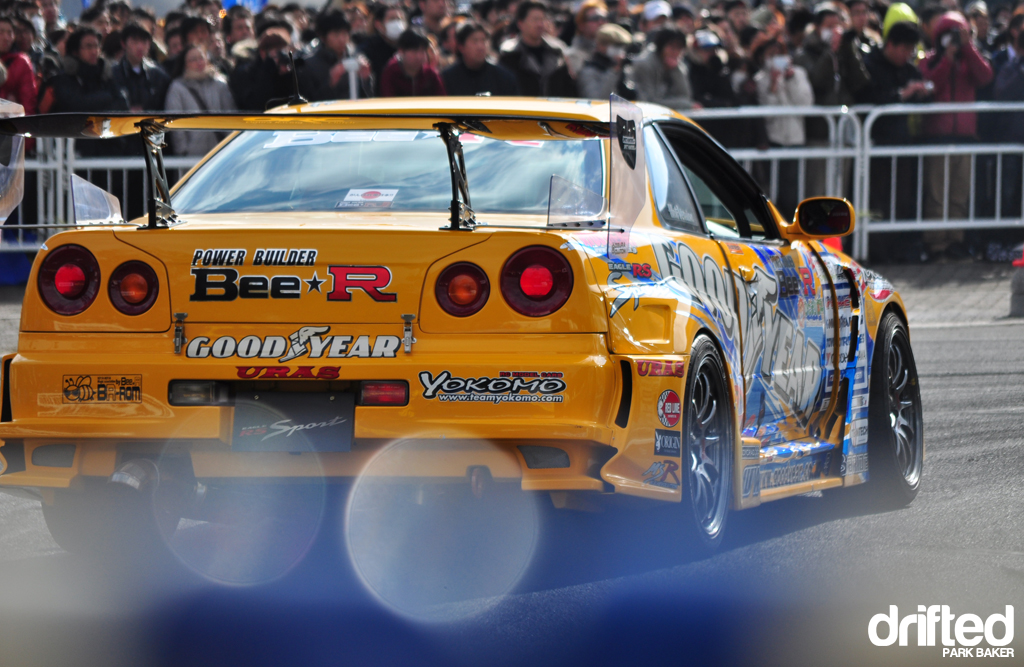 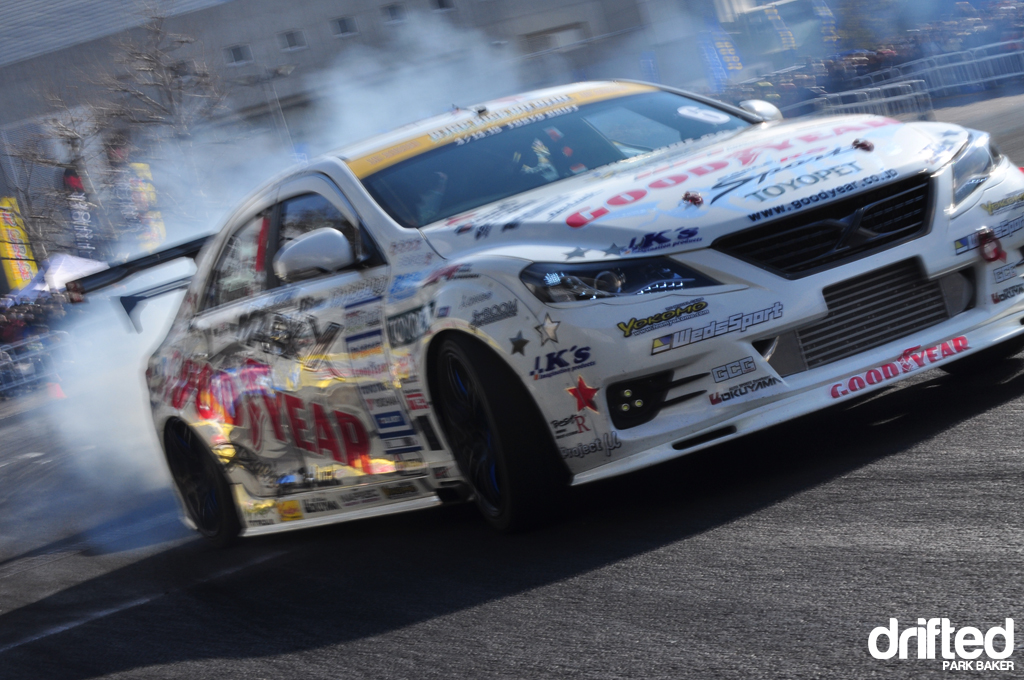 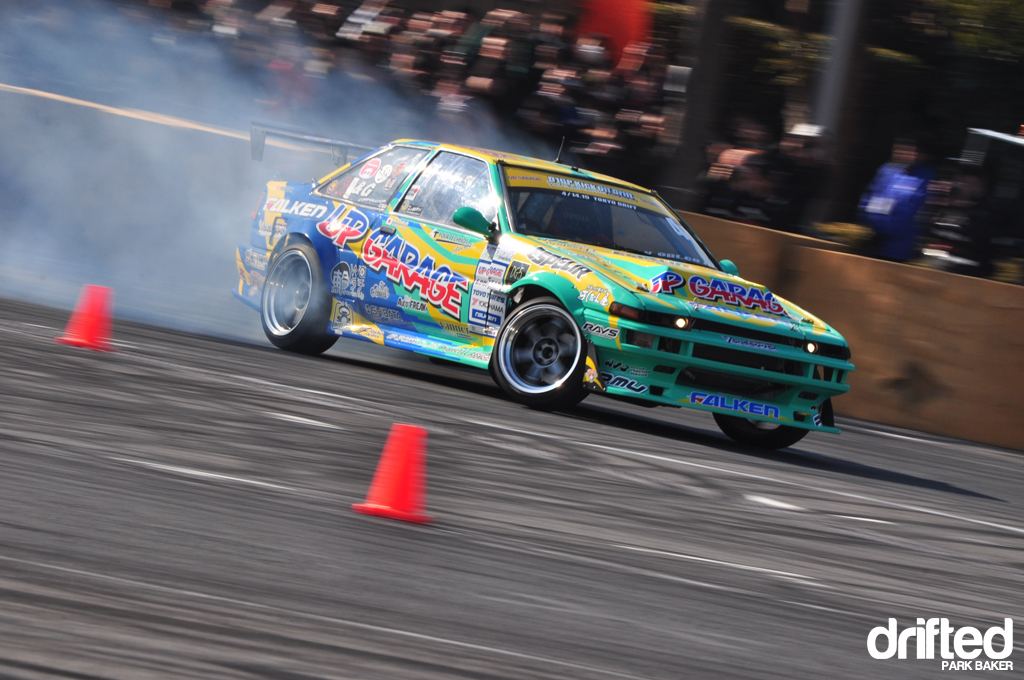 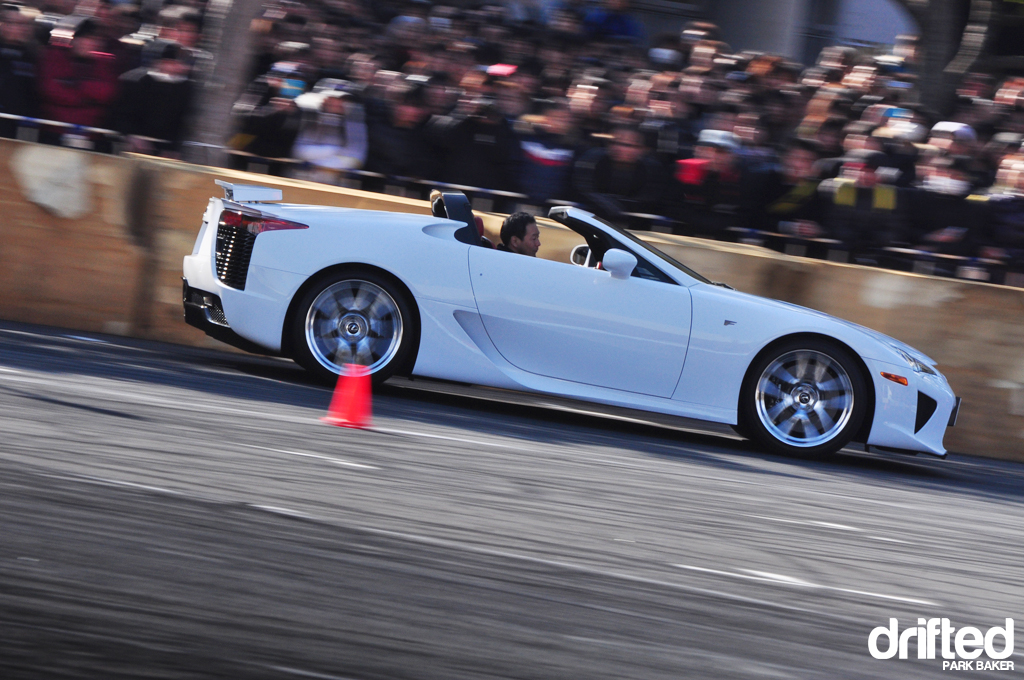 They also brought out the beast for a quick show n’ slide. The lines on the LFA Roadster are just amazing.

Given the choice (as if…), I’d take the current LFA over the new roadster version, but there’s nothing to complain about. Except perhaps the somewhat cheap-looking chrome wheels.

Want to learn about the incredible engine that powers this LFA? Check out our 1LR-GUE engine guide. 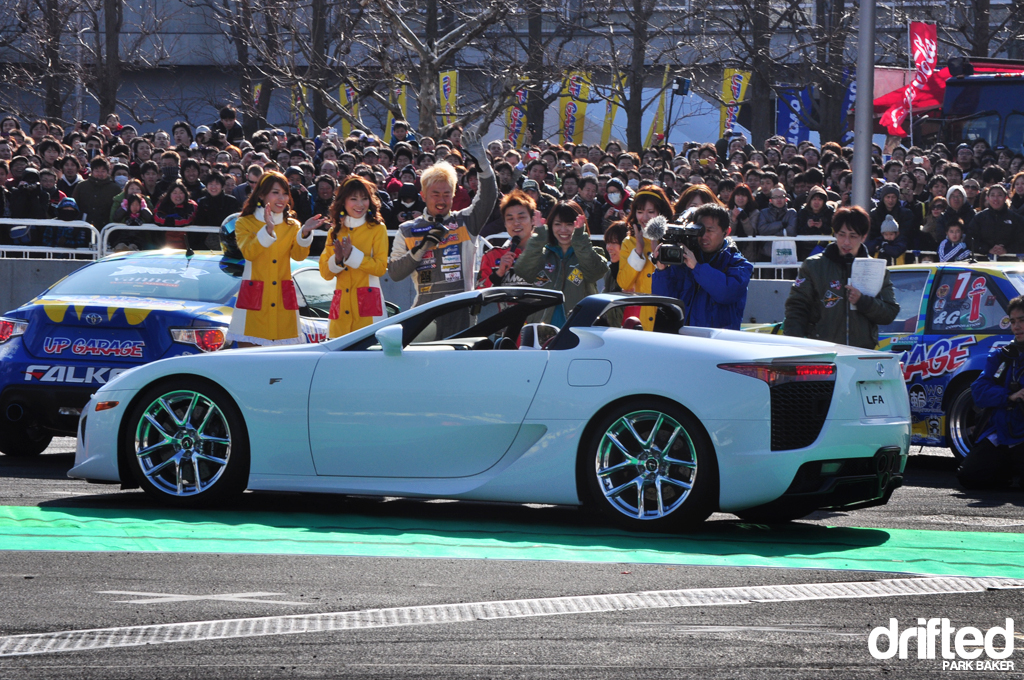 Yet another nice angle.

The tsuiso battles get into full swing in Part II. Stay tuned!