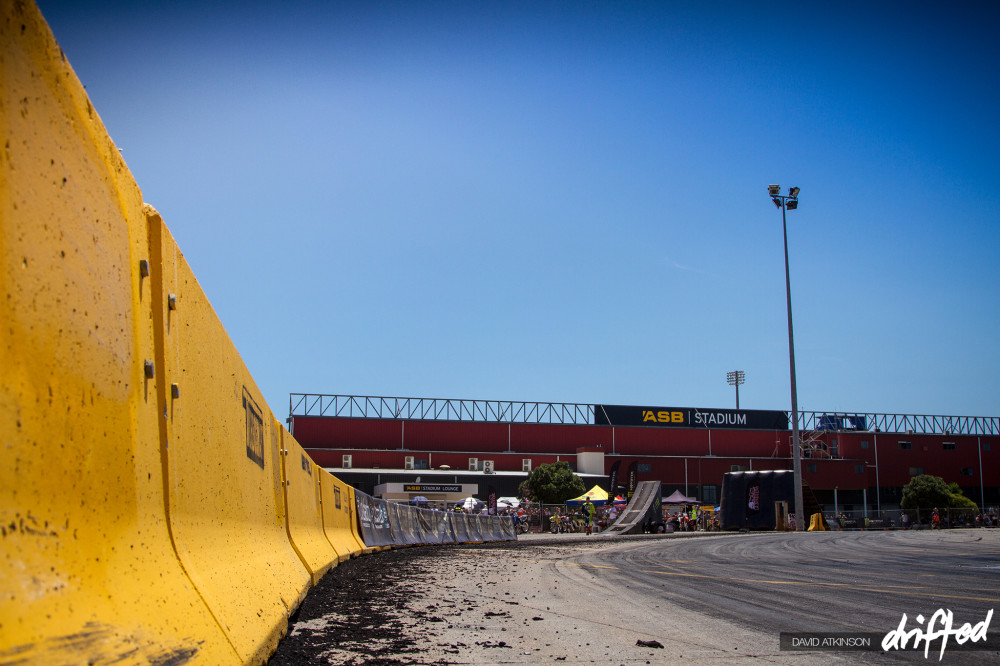 While the rest of the world is still battling wintry conditions, over here in New Zealand we’re making the most of our summer months while we can. It was no surprise the crowd favourite Tauranga based round of the Cody’s D1NZ National Drifting Championship had made a return this year, after the 2013 event was completely sold out and had to close it’s doors!

Even from the Saturday practice day round three was looking to out-do last year’s proceedings. ADGP regular Michael Prosenik had finally taken delivery of his LS1 powered S13 from Aus and went about getting a feeling for it on Kiwi tarmac.

Running Achilles semi-slick tires along with a range of Driftworks components this car seems very well set up and would definitely be a threat come battle time.

Another new car to debut in the Pro competition was this LSx swapped RX7 FD driven by Johnny Latham. I always enjoy shooting new cars and this one sounded great and had the looks to match.

The track layout was more or less identical to last years configuration. A high speed left entry tightening and switching into a final right hand turn. If it ain’t broke – don’t fix it, as the saying goes. 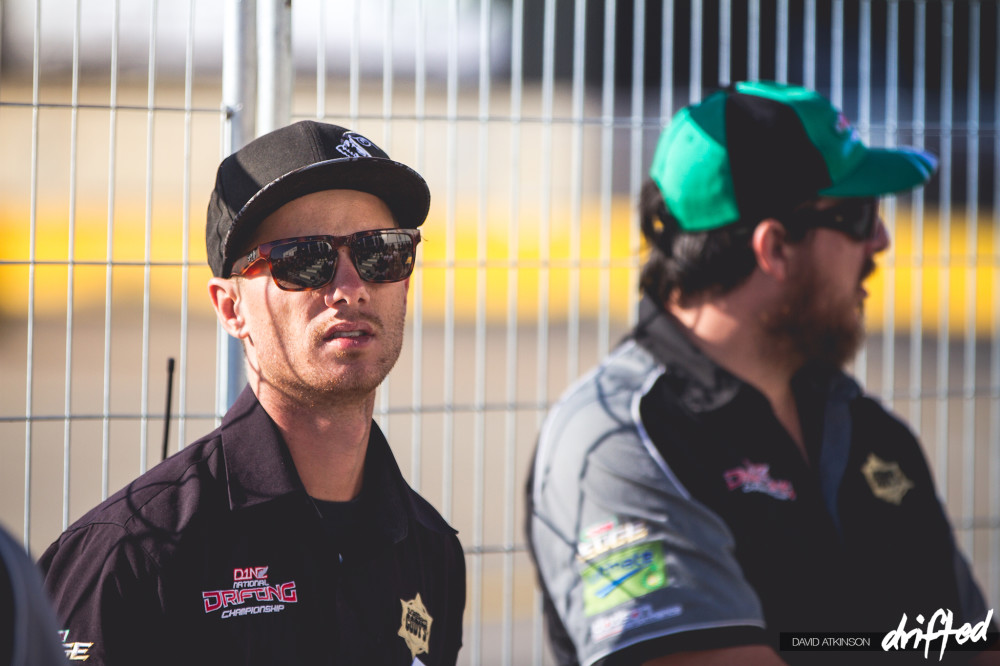 The judges would be looking for good speed coming in to the entry and close proximity to the outer clipping points placed around the outside walls.

No doubt this would be on Gaz Whiter’s mind this weekend after nearly writing his car off in the walls last year. Tapping the entry wall a little too fast caused him to spin around and smash the rear into about a hundred pieces.

Another member of the V8 club was Sky Zhao who was back in NZ after a few weeks in Japan and China. Only his second round of competition with the newer LS7 engine, Zhao was still getting to grips with the set up.

Shane Van Gisbergen was back this round looking a little different, repping the #beardlife. Maybe it would bring him good luck in the battles?

Previous round winner Mad Mike Whiddett looked right at home in another concrete jungle circuit. No doubt he packed a few extra spare bumpers because they would certainly be coming off today!

After two big hits of the wall last round left the C’s Garage S14 looking beaten and bruised beyond repair, I was surprised to see it in the pits looking as new as ever. Adam assured me it was still pretty bent underneath but full credit to the team for getting it back to this condition.

This round would be the last time fans would see Fanga Dan’s car looking like this. Next round he unveils the newer VE Commodore at Taupo so it meant he really could go all out this round and give the old girl a fitting send off. 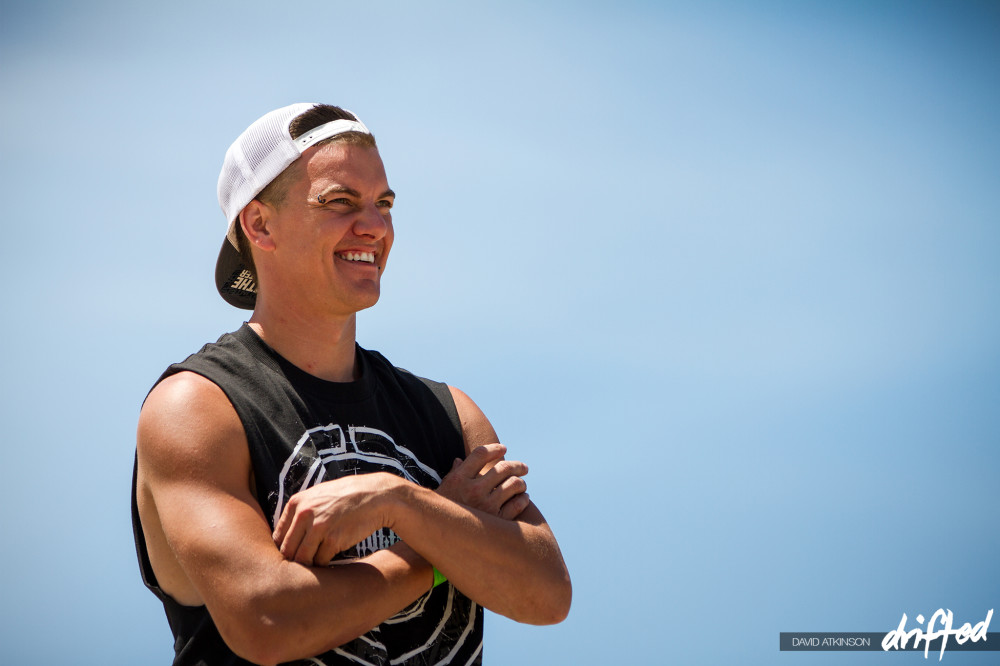 With the pits being in such close proximity to the track it made it easy for everyone to see some drift action – including the drivers. I spotted Mad Mike watching the pro-am drivers and enjoying a rare spot of down-time. 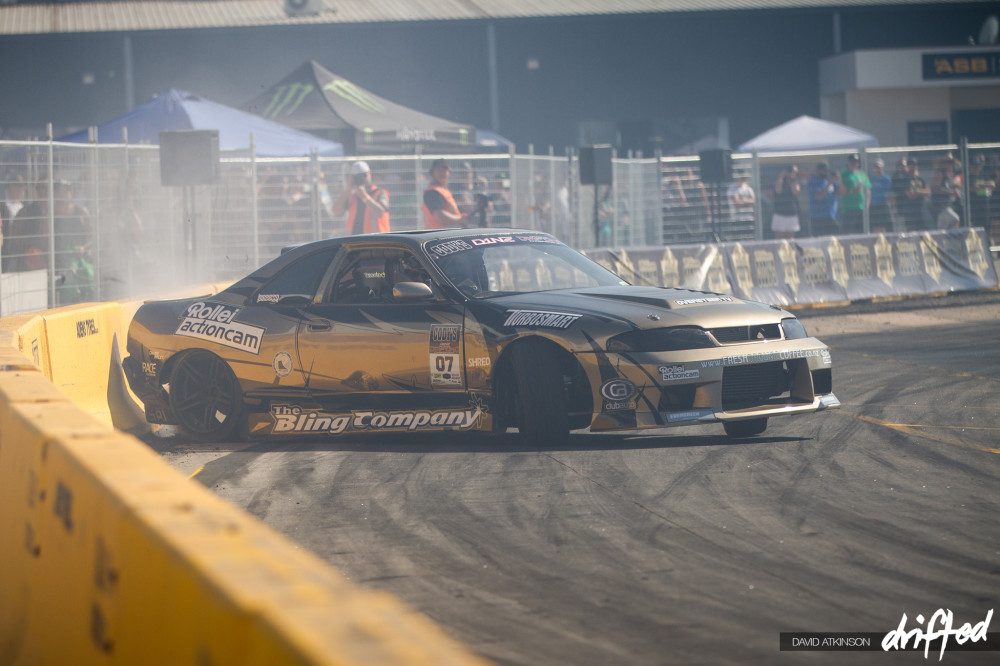 Zak Pole was doing very well in practice – nailing the wall taps with great accuracy. Mechanical issues with the RB30 later on in the day led to Zak borrowing pro-am driver Ben Wilkinson’s S13 for use in qualifying.

This weekend was just not going Gaz Whiter’s way. A mechanical issue on a warm up lap caused the car to slide head first into a wall. The team would not be able to repair the damage in time for qualifying – luckily Troy Jenkins offered his pro-am car for Whiter to borrow, however with barely any practice in the car he took an early exit to the round in the top 32.

Qualifying in third place with a 94 point run was Nico Reid. Looking comfortable out on track, the team must be happy with how the car is performing.

Grabbing second place was Andrew Redward in the Achilles RX7 FC. Making up for being absent last round, Redward nailed home a 95 point score. 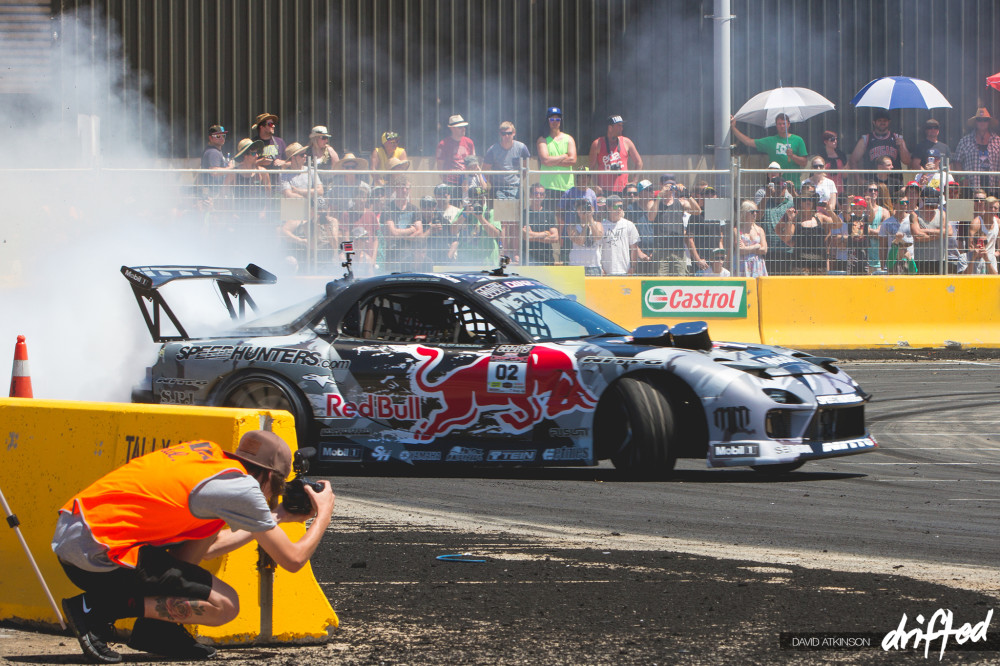 Also scoring an outstanding 95 point qualifying pass was Mad Mike Whiddett. This car was seemingly built with wall rubbing in mind, the rear quarter sweeping the clipping points with each pass. It came down to the second run to decide qualifying order and Mike had the slightly higher score seeing him claim first place.

The clutch gave up on Sky Zhao in his battle with Fanga Dan in the top 16 resulting in an unfortunate end for Team D Spec. Sky’s motto is “drift with a smile” so I’m sure he will already be looking forward to getting out there next round. 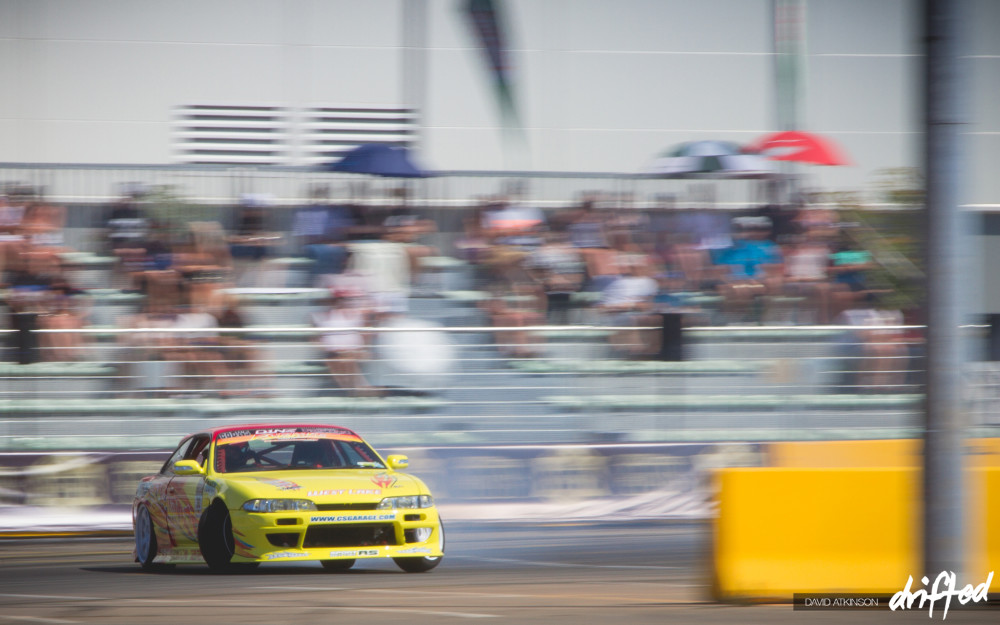 A mechanical problem with the Rattla Motorsport Falcon put an end to Shane Van Gisbergen’s weekend and a free pass into the top 16 for Adam Hedges.

Jodie Verhulst in the Milwaukee Supra was having a tough time with the circuit, no doubt looking to avoid any serious damage. Aden Omnet beat her in the top 32 leaving Drew Donovan to fly the Milwaukee flag.

Zak Pole looked quite confident in the borrowed S13, feeling right at home with a similar RB30 setup. Unfortunately he went off track and hit the wall in his battle with Johnny Latham.

After his win against Sky Zhao, Fanga Dan came up against an on fire Matt Lauder. Despite Matt’s best ever performance it wasn’t enough to beat veteran Fanga, who went on to a place in the top four. 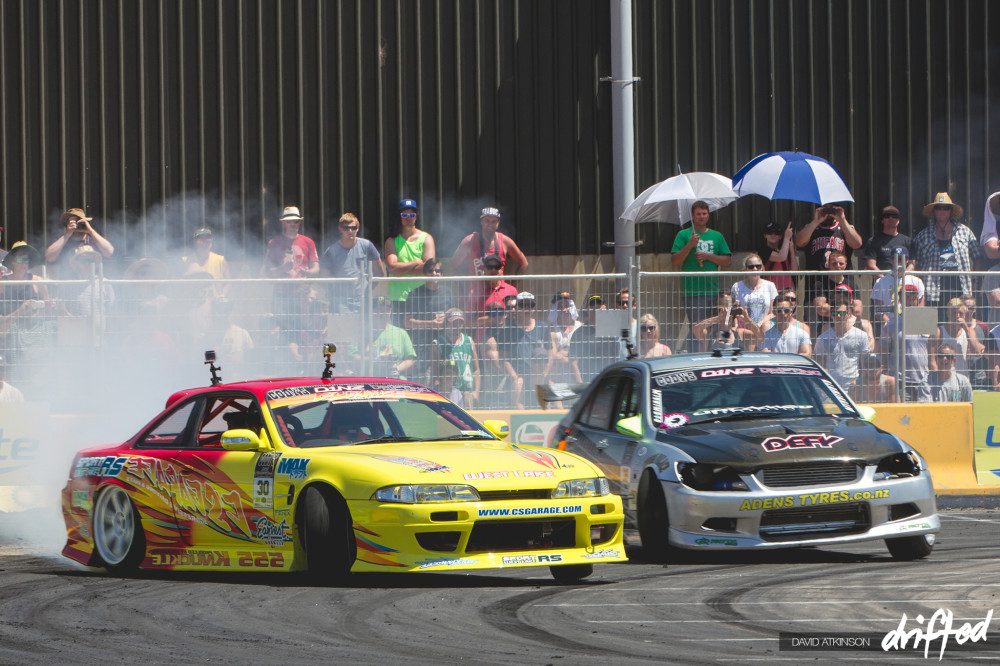 A hard charging Aden Omnet was all over Adam Hedges’ S14 sending him into the top eight.

Qualifying down the order – Prosenik would go about battling his way through the pack. His battle with Joe Kukutai went one more time until eventually Joe tapped the wall and disturbed his line, giving Prosenik the advantage and a place in the top eight. 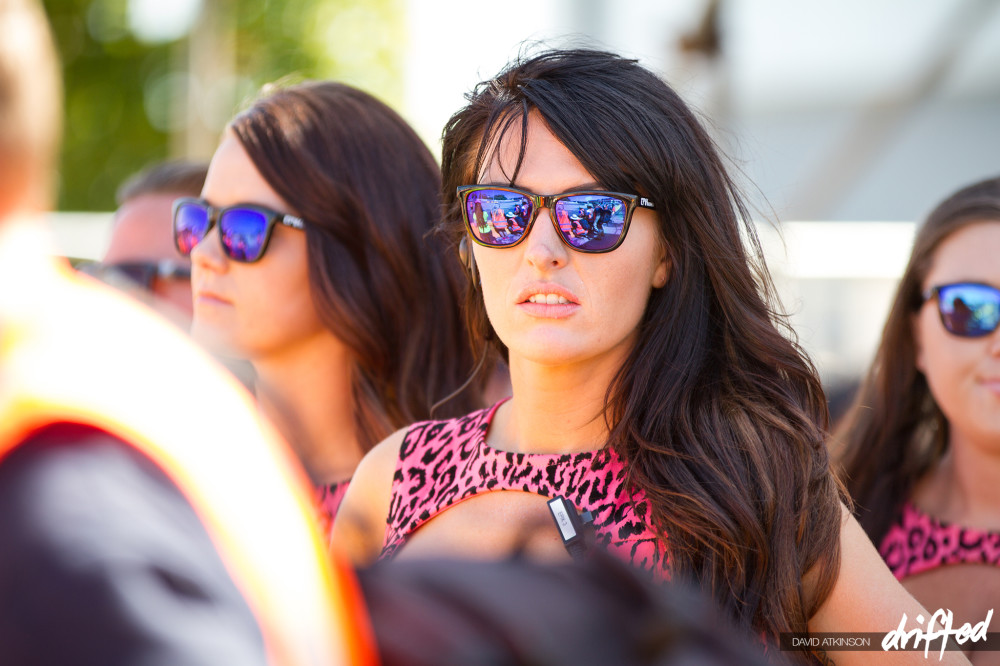 By now the conditions were so hot that without some sunglasses and sun-block you would probably end up looking like a lobster. 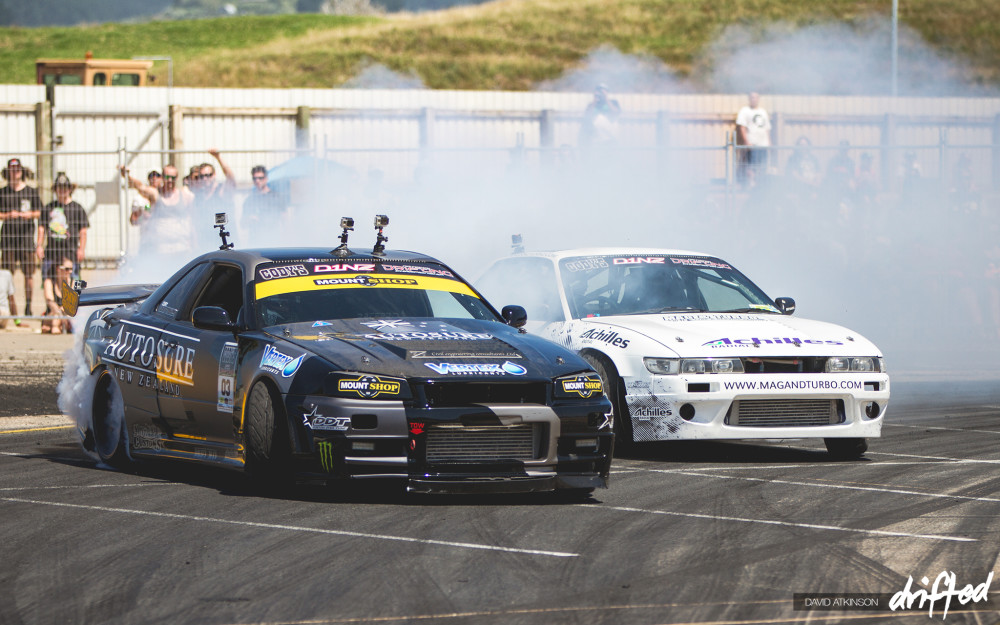 Bruce Tannock was having an excellent weekend. First taking out Troy Forsythe and then going one more time with Curt Whittaker. A superb chase run with good speed and proximity from the Achilles S13 impressed the crowd, but Whittaker lost the battle on his chase run by making contact with the wall and interrupting his drift. 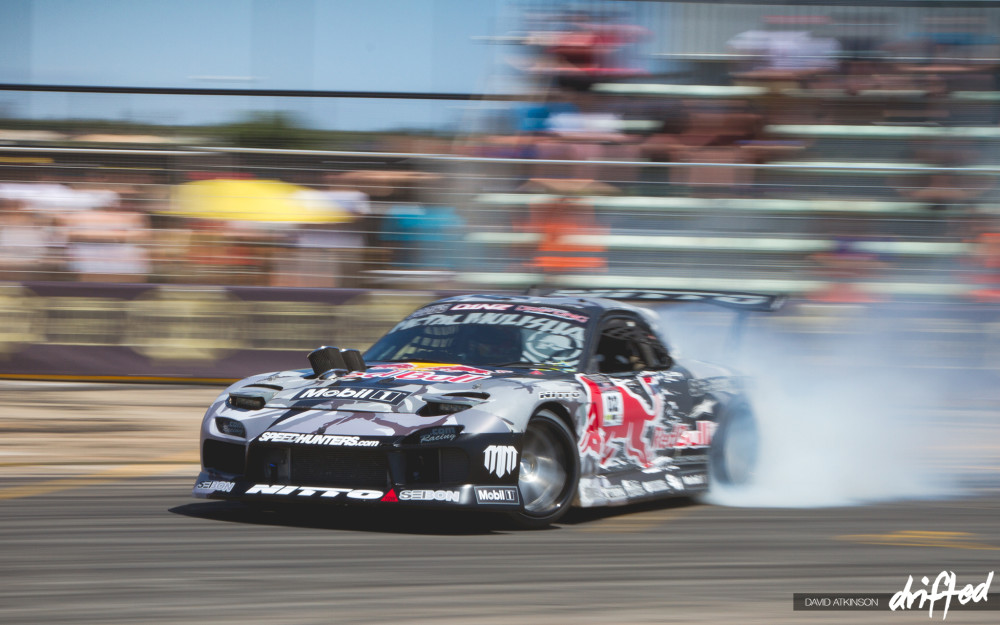 Mad Mike Whiddett was on form once again in the quad rotor RX7. With a bye he was straight into the top 16 to deal with Chris Jackson before battling Aden Omnet. Mike’s angle and acceleration are difficult to match and he was once again into the top four.

Here’s something you don’t see in drifting enough – a flag marshall on the grid wearing an inflatable T-Rex costume. There’s not much more to say! 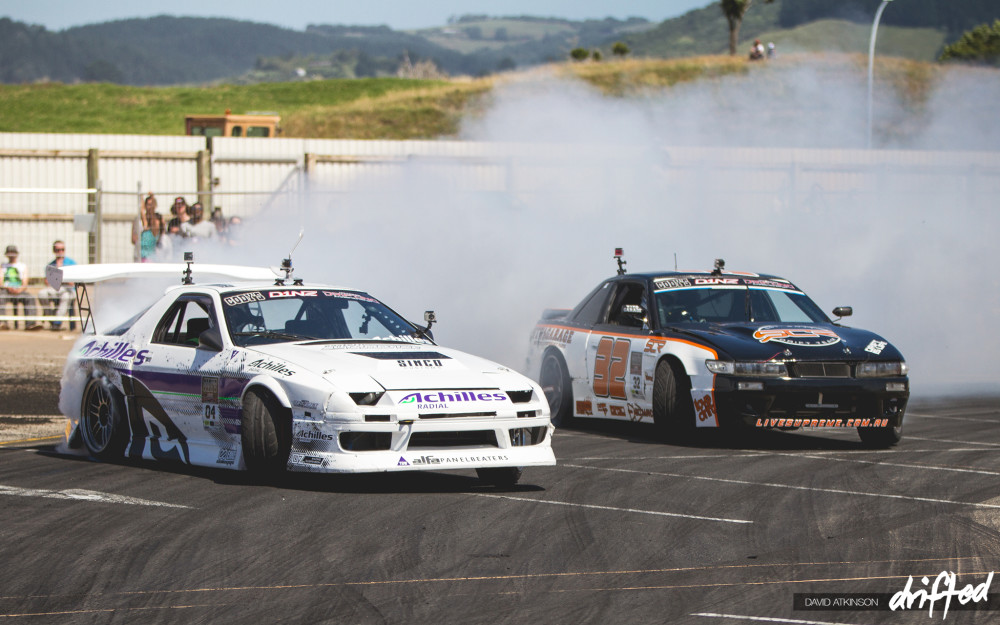 Andrew Redward came up against the Aussie import Michael Prosenik in the top eight. With both drivers having an excellent handle on the line required by the judges it came down to speed and proximity. Redward was able to pull a slight gap on Prosenik seeing him into the top four. 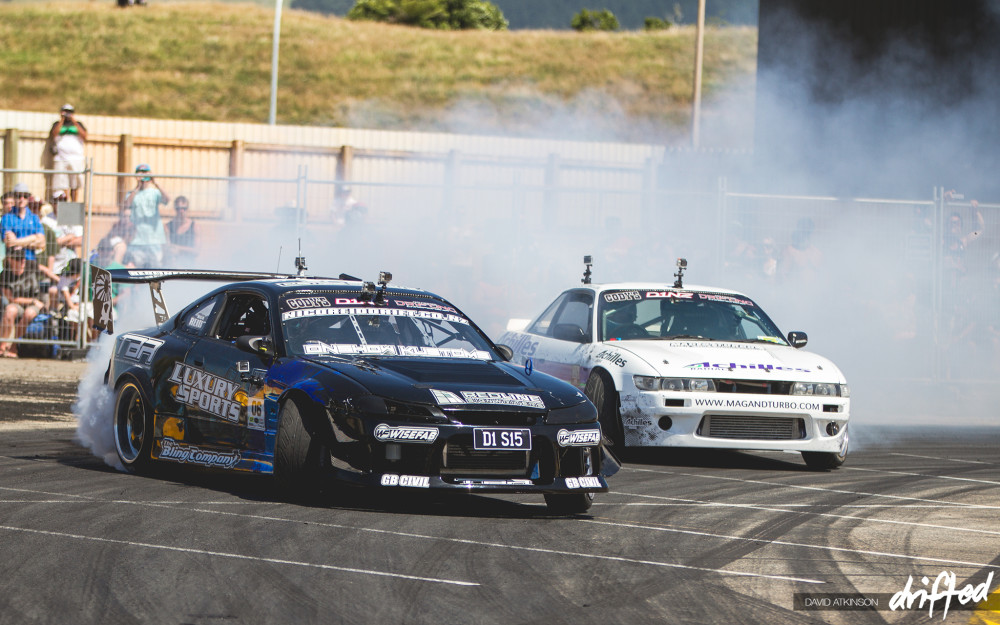 With Bruce Tannock earning his first top eight battle he was certainly on a roll. Coming up against Nico Reid would definitely be a challenge though and the S15 driver was not about to make any mistakes. Nico went through to the top four. 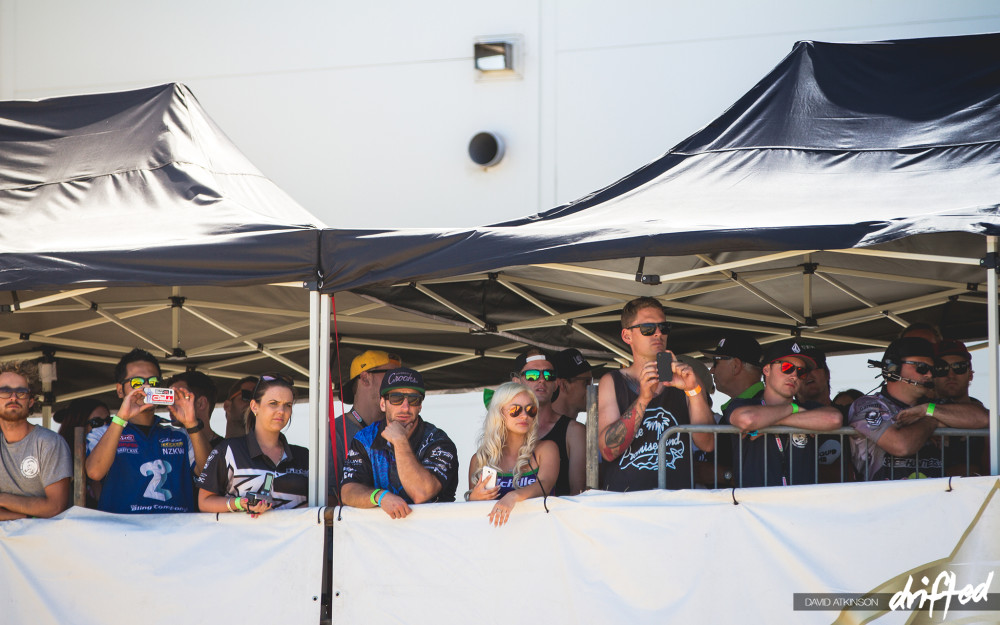 The spotters and team crew looked on from the judges tower, anxious to see who would be competing in the final battles.

Fanga Dan would fight it out with Mad Mike Whiddett for a place in the final. Woolhouse would be looking to make up for an early exit last round however Mike’s legendary chase runs make it hard not to give him the advantage. Going one more time the judges elected to send Mike into the final. 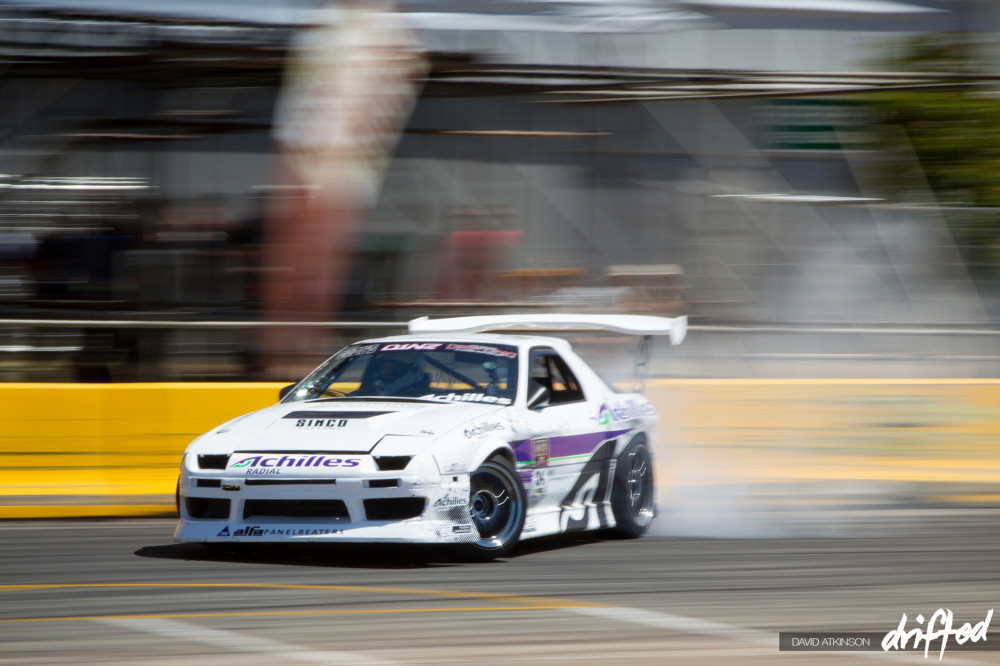 Andrew Redward and Nico Reid were the other two battling for a place in the final. Redward was able to create a gap between the pair on his lead run and gain an advantage, following it up with a superb chase seeing him into the final with Mike.

Third place on the day would go to Nico Reid after an excellent battle with Fanga Dan Woolhouse. The pair were evenly matched until Fanga’s lead run – spinning out near the end of the circuit and handing the podium to Nico.

Onto the final battle of the weekend between Andrew Redward and Mad Mike Whiddett. The first run with Redward giving chase was a textbook tandem battle  bringing the crowd to their feet.

There would be drama straight off the line on Mike’s chase run however, the Madbul missing a gear and allowing Redward a huge gap in proximity. Andrew Redward claiming his first round win since 2009. 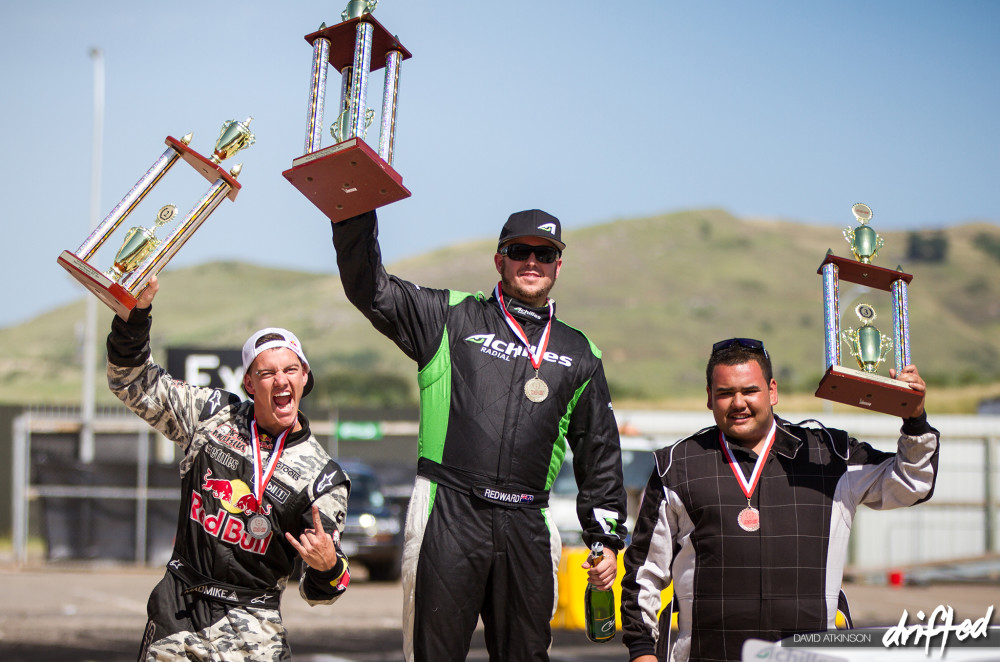 Andrew Redward jumps back up the points table into championship contention following his round win here in Tauranga. Claiming second place in the round, Mad Mike has created a huge lead in championship points sitting in overall top spot by a margin of around 80 points. Nico Reid is in overall third position right alongside some other big names all hungry for the season win.

As usual the top four put on some victory skids to wrap things up. Next round we’re back to a traditional race track at Taupo Motorsport Park where the pace and driving style will be very different so we’ll soon find out how this shakes things up!