After two busy days shooting at Round 1 of the British Drift Championship I was glad of the Sunday to recover.  Whilst I sat at home resting my tired eyes and sun burn I knew I was going to be missing one of the grassroots days we normally cover up at Buxton Raceway in the Derbyshire peaks.  Its a real shame but I really needed the break to prepare for a trip north on the bank holiday Monday for the start of yet another championship – the Drift Allstars Europe Championship up at Teesside Autodrome near Middlesbrough.

Most of you are probably very familiar with the ‘JDM Allstars‘ brand name but in 2011 the championship is now known as ‘Drift Allstars Europe‘ to reflect the fact that the competitors now span many European countries – not just the UK and Ireland.  This change also reflects the fact that many of the rounds for this years championship will also take place at circuits in mainland Europe.

With the drivers and media briefings set to take place at 8:00am in the morning I loaded a large Pelican hard case full of lens and 2 other bags of camera bodies and accessories into the boot of my trusty M3 to make the 140 mile journey north from Derby.  Amazingly by 7am I found myself sat at a popular fast food joint less than a mile from the circuit tucking into a sausage & egg-based breakfast product – the BMW had made easy work of the journey on largely deserted roads.  The car excels at speed and comfort – its not so good at fuel economy though!

After signing in at the control centre I took a walk over to the track – I love this tarmac – I’ve driven here on 2 or 3 occasions in the past and will no doubt do so again in the future.  Teesside actually has two separate circuits at the venue – the main circuit would be used for today’s competition whilst the straight on the west circuit would serve as the pits and garage area for the drivers and teams. This circuit hasn’t been used for competition drifting since way back in 2008.  Not long after this drift practice days at the venue also came to a halt due to noise complaints and the UK drift scene had to make do without.  Fortunately practice days have resumed here in the last few months so Teesside is back on the map again.  Of this we are very glad! 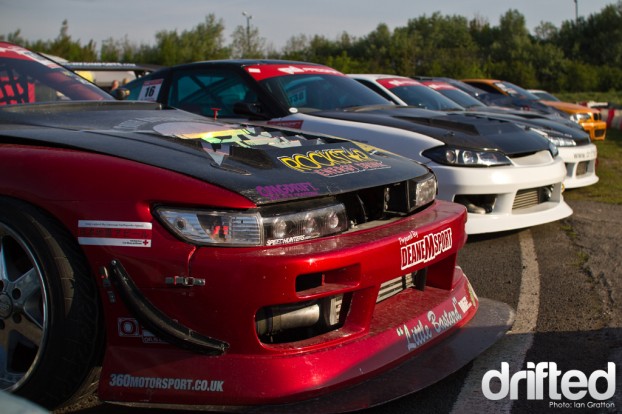 You’ll notice a lot of red sun strips across the windscreens of many of the cars – this is because they are fresh from Round 1 of the Prodrift Championship earlier in the month.  There were quite a few unfamiliar cars too – these would belong to competitors from mainland Europe – for many their first visit to Teesside.  Lets take a look at some of the cars that will likely be unfamiliar to spectators at regular UK events. 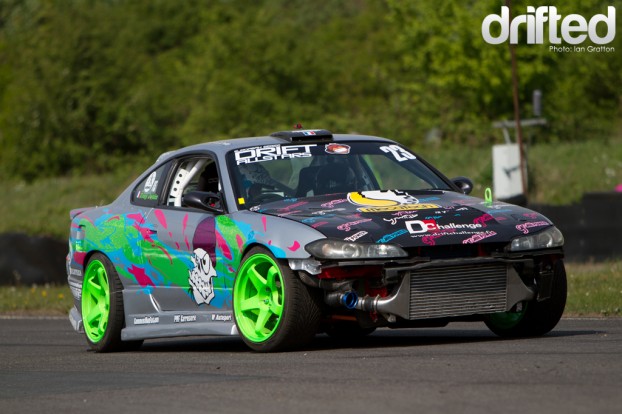 This superbly prepared S15 belonged to Tony Jouin from France.  The car seemed to go really well in the morning’s open practice but unfortunately mechanical issues stopped any serious attempt at a place in the Top 16. 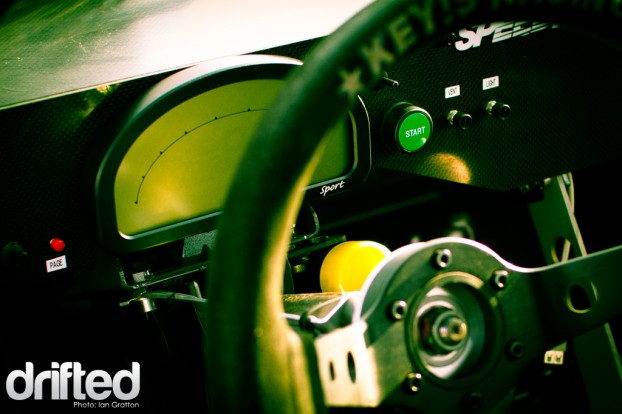 Italy’s Fillippo Pirini had made quite a journey to the event in an extremely potent NB MX-5.  Peering into the cockpit you find a substantial roll cage plus a completely bestoke carbon fibre dash holding a MOTEC LCD Display plumbed straight into the engine management system. 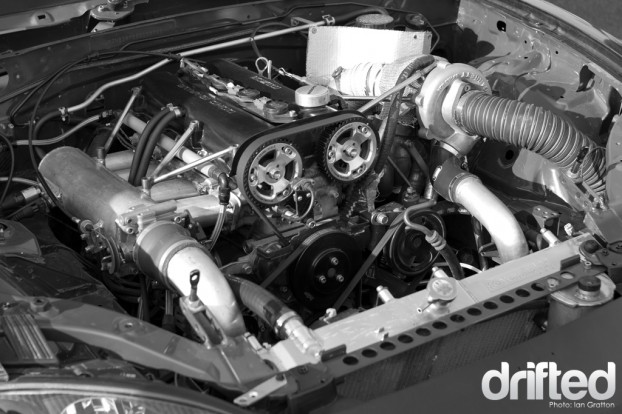 This car was packing the punch of a turbo charger with a suitably internally modified engine reworked inlet plenum.  With approx 300bhp on tap the little car must be awesome to drive.  The car also included fully re-worked brake system with massive 4 pots up front to help shed the little Mazda’s new found speed. 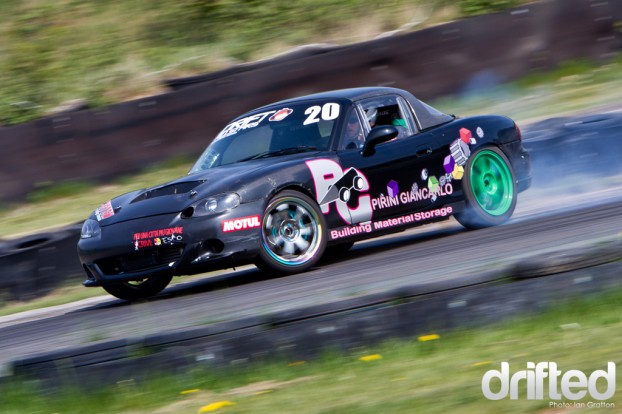 The rest of the car was also built to a really high standard with lots of weight saving changes like carbon fibre front wings, doors, roof, bonnet and and boot lid.  It was a real joy watching the little car but unfortunately Fillippo didn’t make the final 16 battles. 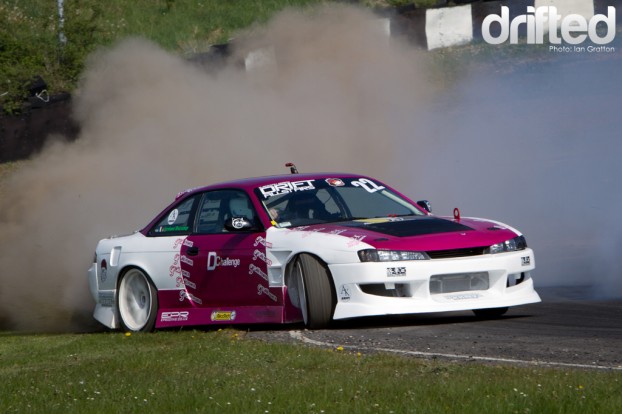 Jerome Bucamp’s 2JZ Powered s14 had plenty of punch and put down some solid qualifying runs for a place in the Top 16.   The Teesside owners won’t need to cut the grass for a few weeks now.

Benjamin Boubeles E36 BMW Coupe had undergone exterior changes (opposing rear quarters are now wrapped in chrome! – which my camera hates)  since I last saw it in action back in Portugal back in 2010 where he… 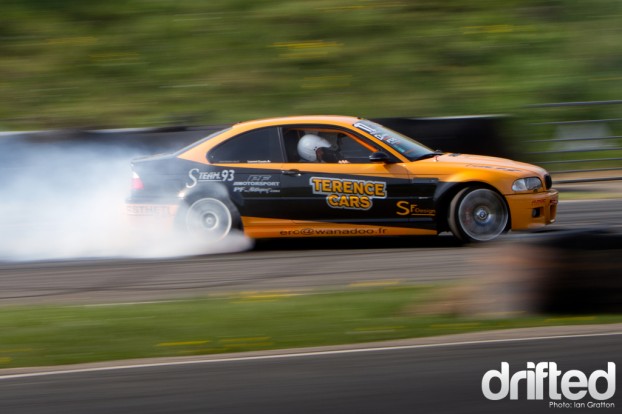 ….battled against Laurent Cousin in the E46 M3.  This car has also undergone a exterior changes with a paint scheme that looks like it may have been inspired by the Driftworks 2JZ S15 when it was first unveiled back 2009.

Barry Leonard’s WKD Imports S14 lost a rear 1/4 panel and glass in open practice after a bit of a coming together with team mate Wesley Keating.

The bashed in quarters on both cars didn’t stop both WKD drivers making the Top 16 battles. 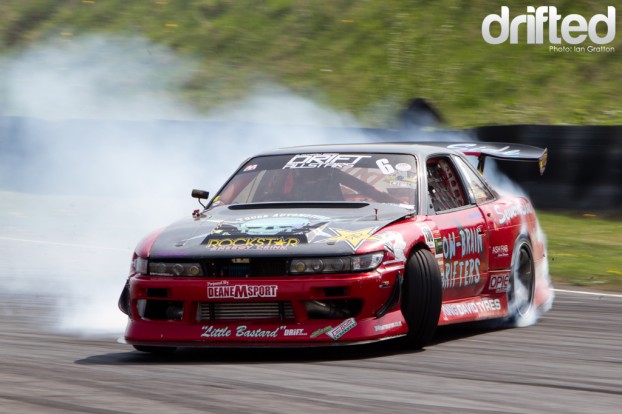 Last year the Severnside Imports/LBD ‘Little Bastard’ was piloted by Luke Fink who took the 2010 JDM Allstars Championship.  Running only 1 car this year Formula D’s James Deane took the car into the Top 16 and performed well straight from the off. 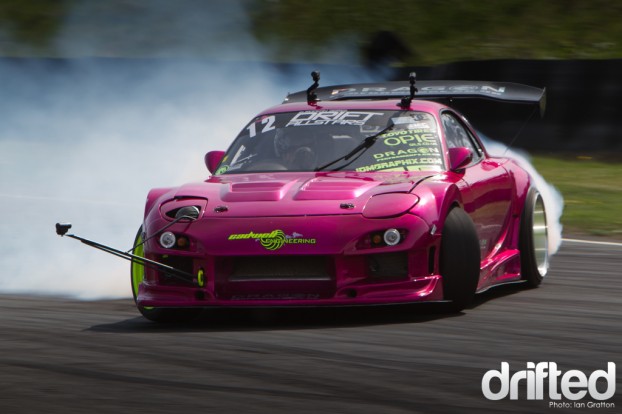 The Dragon Motorsports FD driven by Brad Hacker looked as stunning as ever.  Loaded up with video cameras we can no doubt look forward to some stunning footage out on the interweb sometime soon.  Unfortunately for Brad and the Dragon team the car suffered from some drive train issues and missed out on a spot in the Top 16.  There is something about this car – it just looks and sounds soooo right. 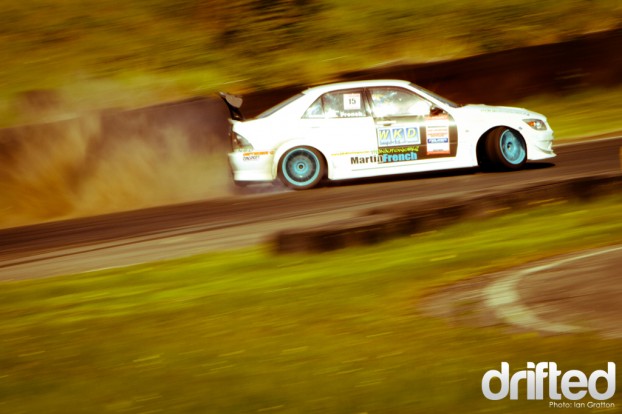 As practice progressed entry speeds into the first corner were getting faster and faster and not wanting to be outdone Martin Ffrench put in some extra effort in the SR20-powered Lexus IS200/Altezza.

On one occasion Martin initiated super early and super fast making the IS200 take to the grass at speed.  The car finally came to a rest beached on its belly in the grass pretty close to the wall.  Experiencing this obviously showed Martin the wrong side of too far and every subsequent entry was as good as perfect.  Tom Yate’s Purple S14-fronted-S13 help to pull Martin from the kitty litter.

Brad McQueen’s Ouch Tattoo Nissan s14 Silvia was looking well with its 2011 freshen up and new graphics.  One of Brad’s earlier runs resulted in him also taking to the grass on a very early entry. 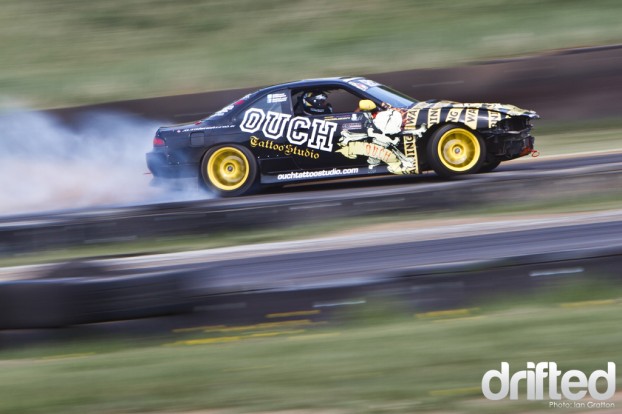 Bar some light front end damage Brad continued on and got himself a spot in the Top 16 during qualifying.

Anthony ‘Scotty’ Scott’s Rocket Bunny Silvia remains SR20-powered for 2011.  Speaking to Scotty he reckons the car is much more nimble now without the iron block of the RB30 engine up front – the car certainly looks more nimble from my vantage point. 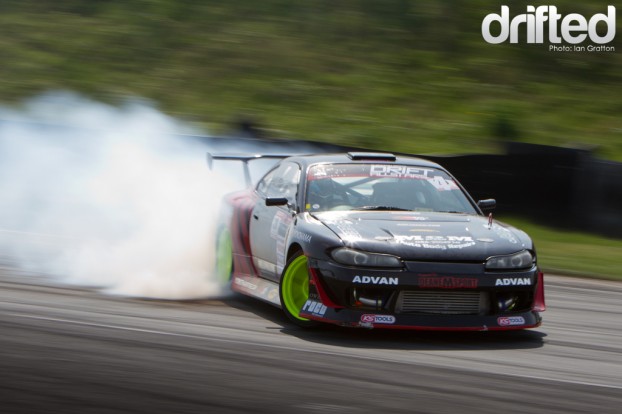 Christy Carpenter’s recently featured 600bhp 1JZ-powered Yokohama S15 is looking fine in its new 2011 livery.  No issues obtaining a spot in the Top 16 for him.

Ian ‘Bizz’ Philips managed to take 5th place in the Pro class of Round one of the British Drift Championship at Donington Park only 2 days previously.   The LS3 engine normally found in the ’08 Corvette has a seriously savage bark which really echoed round the bowled-out big left hander on Teesside’s east circuit. Spending so much seat time in the car recently has obviously allowed Ian to get quite intimate with it giving him easy place in the Top 16. 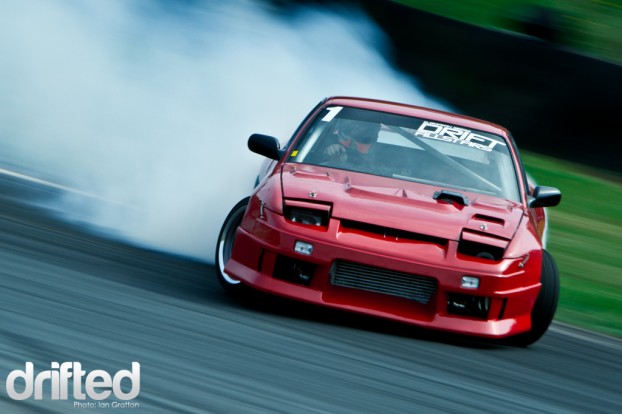 After a 2nd place finish in last years JDM Allstars Jon Calvert was back in his tried and tested SR20 powered 180SX.  Unfortunately the car seemed to really bog down in the tighter middle section of the course and Jon didn’t manage a spot in the Top 16 which is a real shame.

Steve ‘Stiggy’ Evans – another man who’d had a busy bank holiday weekend having been a commentator at the BDC event at Donington.  Stiggy was also nursing an injured wrist which must be pretty tough work in a car with no power assisted steering.

The Starlet is now also running a normally aspirated Cosworth YB engine which gives it some good torque – weighing so little the car absolutely flies.  No problems with sun and reflections with this car as its been flatted down ready for a new paint job.  In qualifying the clutch cable snapped on this car but Steve still managed to bag a spot in the Top 16.  Top work.

Nigel Colfer put in some great runs during qualifying to bag a place in the top 16.  Speedhunter Paddy McGrath stood just to the side of the clipping point to give the drivers a little something extra to aim for!

Qualifying was over and the drivers were brought down in front of the crowd whilst the positions and running orders of the battles were announced. 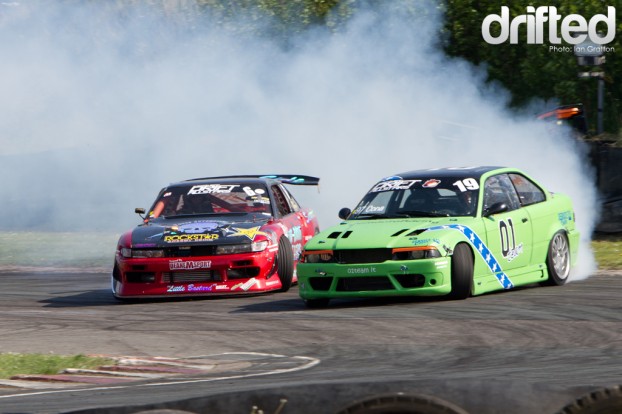 Some of the Top 16 battles were extremely close from the off showing the level of driver ability in the championship.  James Deane takes out Alberto Cona and his M3 for a spot in the top 8. 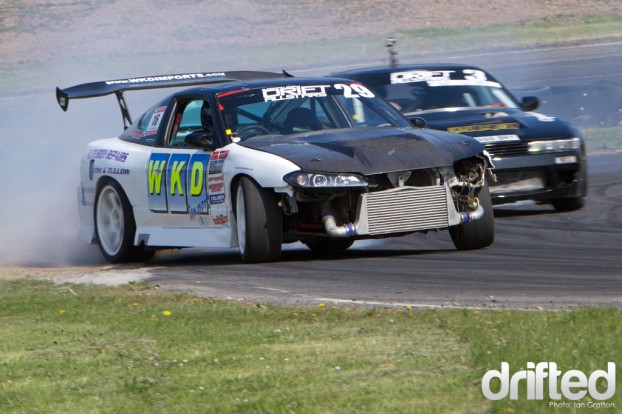 Wesley Keating beat Scotty for his place in the top 8. 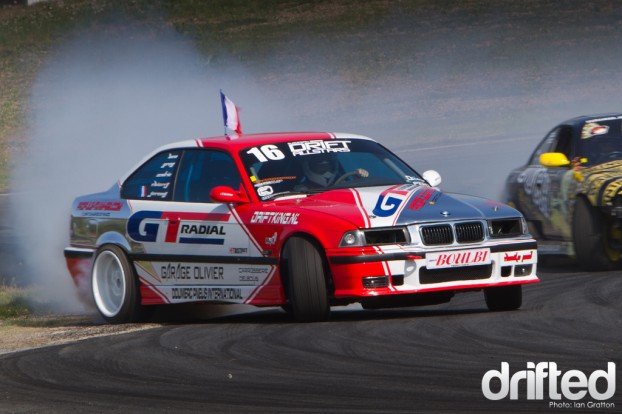 Benjamin Boubeles E36 BMW took a place in the 8 away from Brad McQueen.

Christy Carpenter put a stop to Barry Leonards chances of going any further in round one.  Nigel Colfer also went through.

Ian Phillips took a place in the great 8.  Injured and clutch-less Steve Evans did his best but on this occasion it wasn’t to be.  We look forward to seeing this pairing again – a real David vs Goliath battle – the Starlet is tiny compared to the R33. 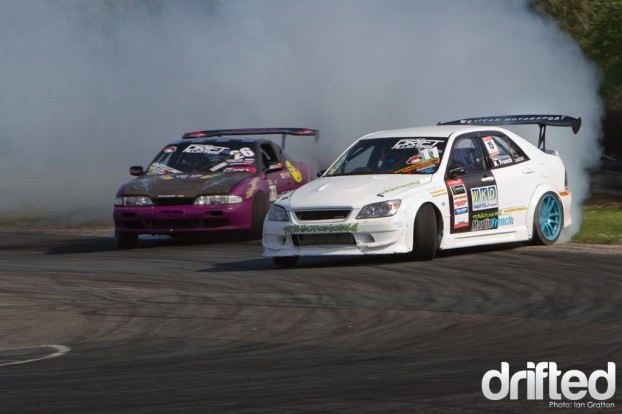 Martin French knocked out the Purple S14/S13 Frankenstein of Tom Yates for his place in the final 8 – even after Tom had rescued him from the gravel trap earlier in qualifying. 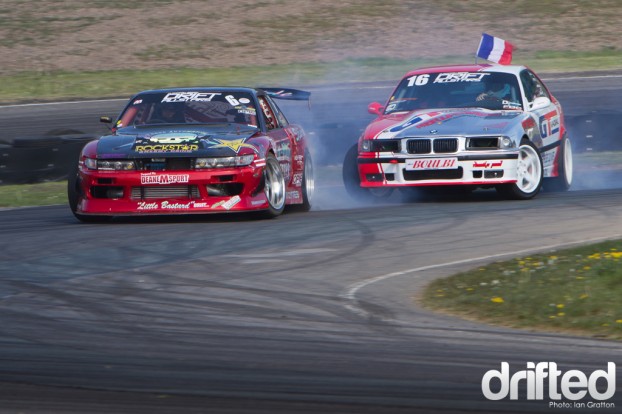 James Deane was the first into the Final 4.  Followed by Nigel Colfer and Ian Phillips. 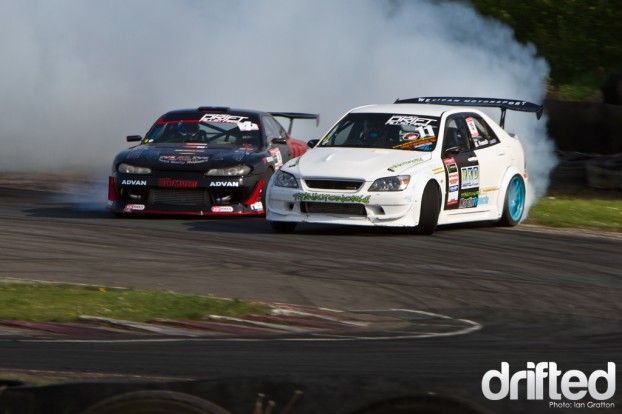 Martin Ffrench the last driver through beating Christy Carpenter – great great driving from this pair – it must have been a really tough choice for the judges.

Nigel Colfer gets his spot in the final. 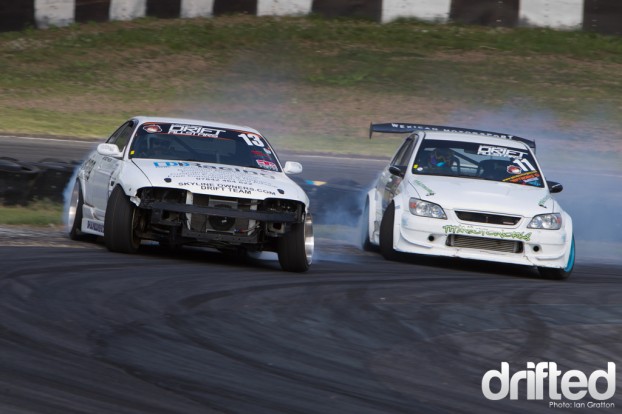 From this point every single battle was intense.  Ian Philips ended up in the battle to decide who would take 3rd place and Martin’s IS200 got a spot in the finals.

There wasn’t a great deal between Mr Philips and James Deane but eventually James took 3rd and Ian missed out on a spot on the polium with 4th.  Not a bad place to end the weekend given a busy 2 days earlier that weekend at Donington with the BDC.  The V8-powered Skyline is obviously a very reliable package. 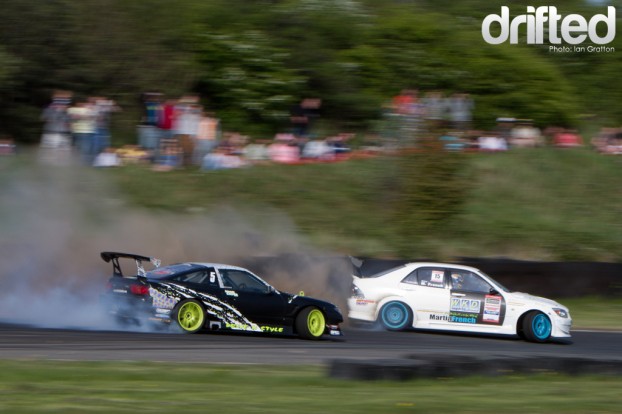 Nigel Colfer and Martin Ffrench both wanted to be on the top step of the podium and they made sure the judges had a hard time deciding who it would be.

Tiny errors differentiated between the two well-matched Irish drivers and it was eventually Martin Ffrench who got the  top spot on the podium.  The final standings were as follows:

By the time I’d returned from the centre of the east circuit which had been my vantage point for the last few hours the podium area at Teesside was jam-packed – there was no way I was getting any photographs of the drivers showering themselves in champagne as the crowd had already engulfed them. Mr Ffrench was obviously over the moon with first place!