It’s almost a tradition that the season for most of the southwest drifters starts in Anneau. In 2013, Speed Industries hosted their first event in the first week of March. In a time where more and more drift events are getting closed or banned, Anneau du Rhin is one of the last castles that remain. Due to this fact, the cars showing up at Anneau keep getting better and better; many European pro drifters have trained here.

It’s been around for many years and is propably the best way to get a lot of seattime for a small price, thanks to Tobias Welti and the other Speed Industries guys which host the trackdays several times a year.

Axel Mack an experienced drifting judge and a Member of Team Rowdy; he brought his E36 1JZ.

Alain Thomet, who is already known for bizarre exhaust constructions; he had this Bosozoku style exhaust mounted on his S14. 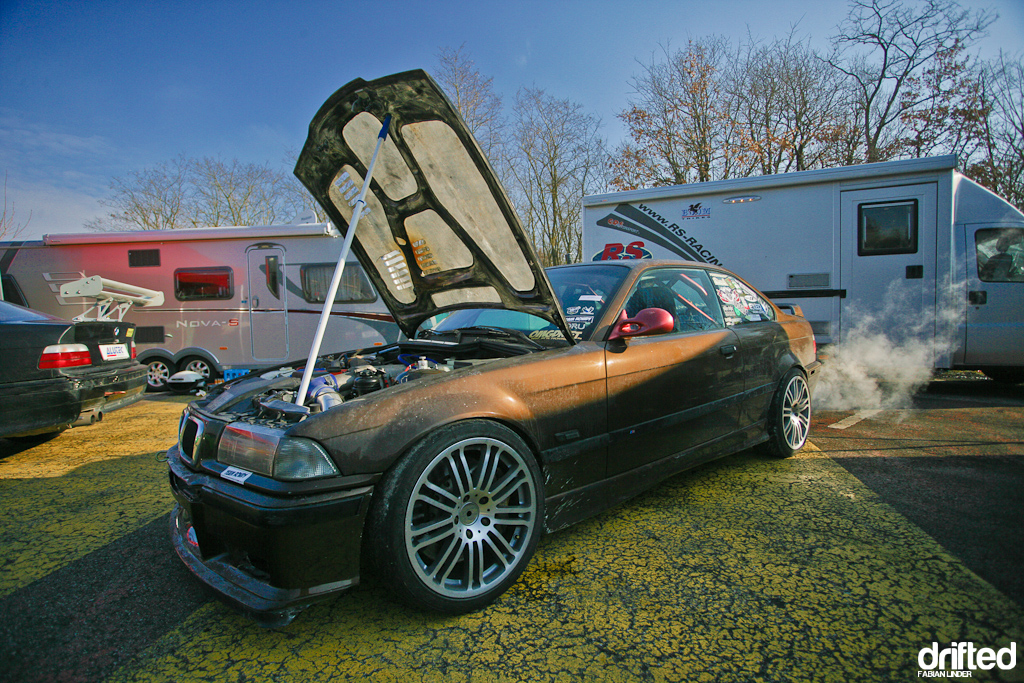 Axel calls it “Brownie”; what started in 2006 as Driftslut is now a good looking competition drift car painted in “Marrakesh Brown”.

The last few years Alex Rösch used a M5 for drifting, this year he brought his Corvette ZR-1. Alex is known for his balls out mentality, we saw the M5 often hard on the limit, will the Corvette handle this?

In winter this friend used his 350Z; now he uses a proper S13 with all the small mods needed for drifting.

My first love while walking through the pit: this swiss owned AE68 is CA18 powered.

The interor is Japanese minimalism. 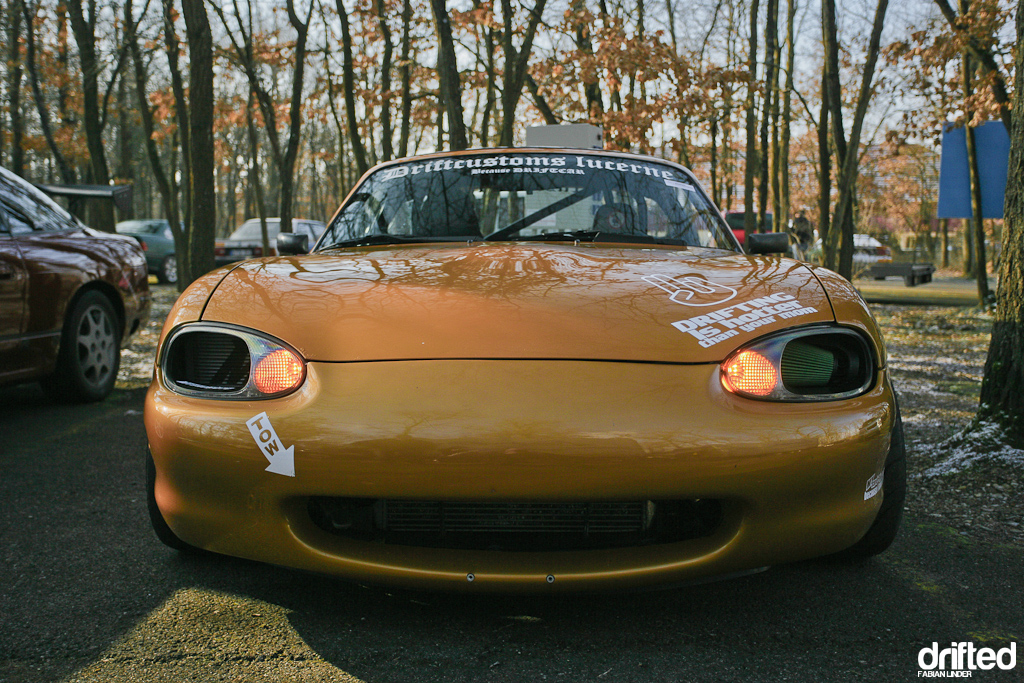 Another car that immediately caught my attention; an MX5 NB with air vents instead of headlights.

Slammed with nice wheels on the front and Porsche-look teledials on the rear.

Compared to three years ago, there are nowadays more and more Japanese cars instead the usual BMWs. 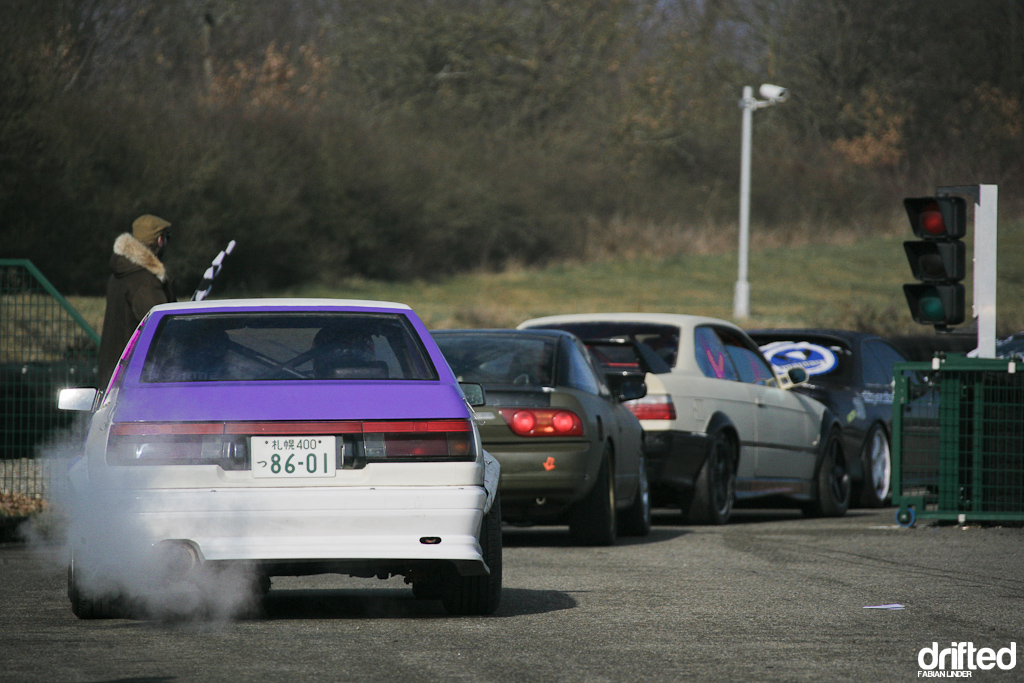 The track opened and almost 60 drifters streamed on the track.

After the long winter, a lot of drivers had to acclimatise to the conditions of a dry track.

Bianca Lankes always had a Mercedes for Drifting; her husband painted her W202 in a white & magenta combo.

The french team D-Famous showed up with their radical looking R34. 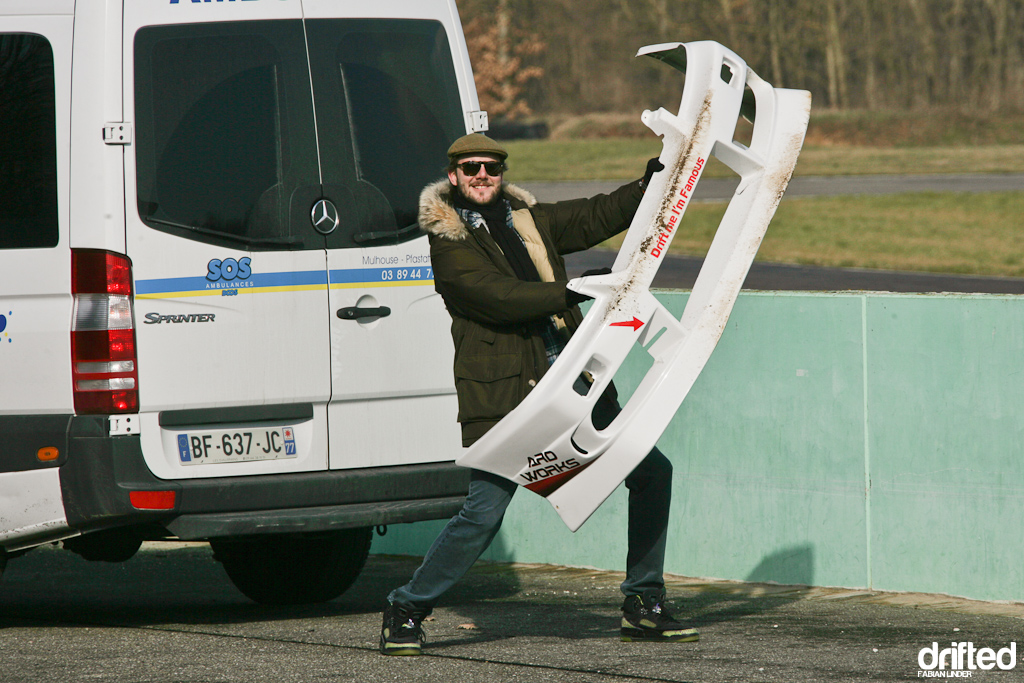 After the first stint Andrew already had souvenirs from the track.

The wobbling fibre hood of the CA86 was fixed with some tape.

Surprise under the hood of the Skyline: the RB25 was replaced with a JZ!

During the winter a friend asked me to photoshop a livery for his car; this is what came out. 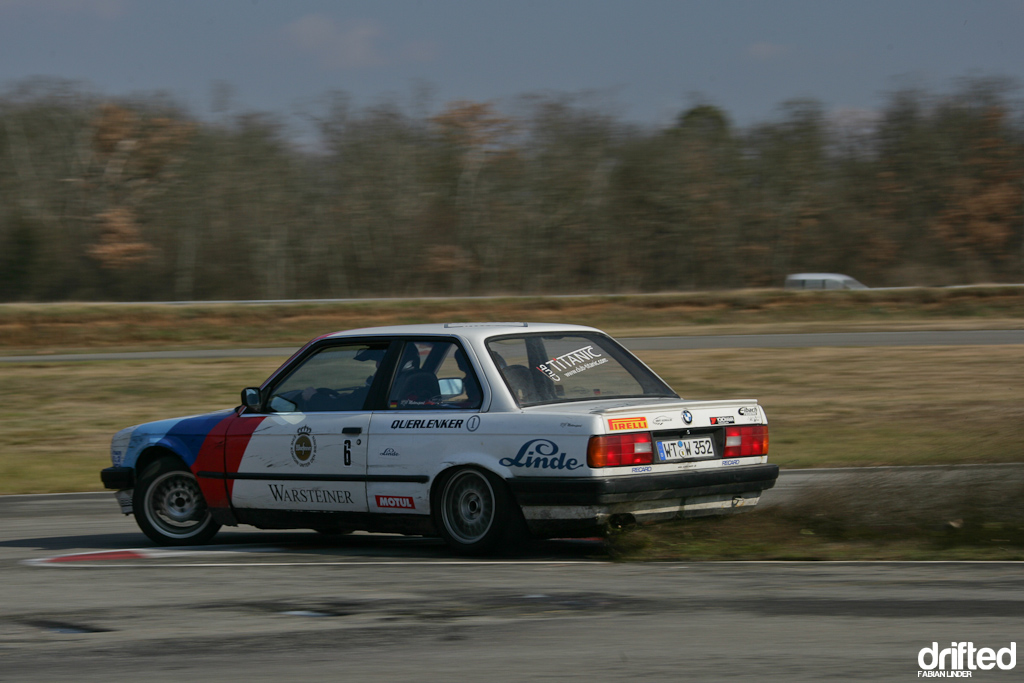 In the past the most used drift car in germany, the E30, is getting rarer and rarer.

One of my local Rookies: Kevin Schlegel and his S13; talented guy!

The Houndtonji Driftbrother brought their Pro Driftcar, an S13 with Mitsubishi Front and Pick up rear.

The noise it made was quite different to the BMW V8 it normally contains. This secret will be released later…

The CA heart fits well in the small and agile chassis of the AE; on a small track like Anneau its perfect.

The brownie was tyre slaying like a pro. During the off-season he received a new rollcage by his new sponsor Stahlus Rollcages.

The phallus on the windshield is a synonym for “Keep Drifting Fun”; Axel is a good friend of KDF artist and (also) BMW JZ driver Andy Sapp. 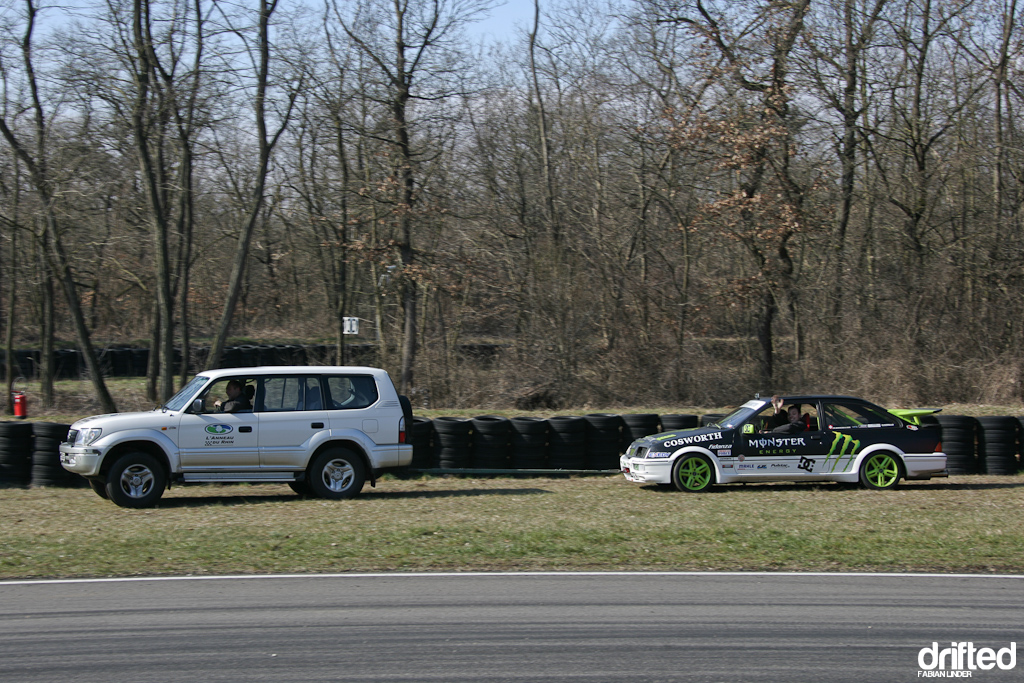 Every 30 minutes was a time attack session, but since there were only three time attack cars, later in the day was dedicated to drifting. Christian brought his Sierra Cosworth, wrecked the gearbox and swapped a new one the same day to attend another trackday the day after. This is addiction.

Bianca and her Princess; always good to see a Mercedes competing.

Dr.Drew aka Andrew Hirschy, is not only a Pro-Golfer from Geneva, but also a talented drifter competing in the French series. His private car collection also includes a Jaguar E-Type; would be a classy drift missle 😉 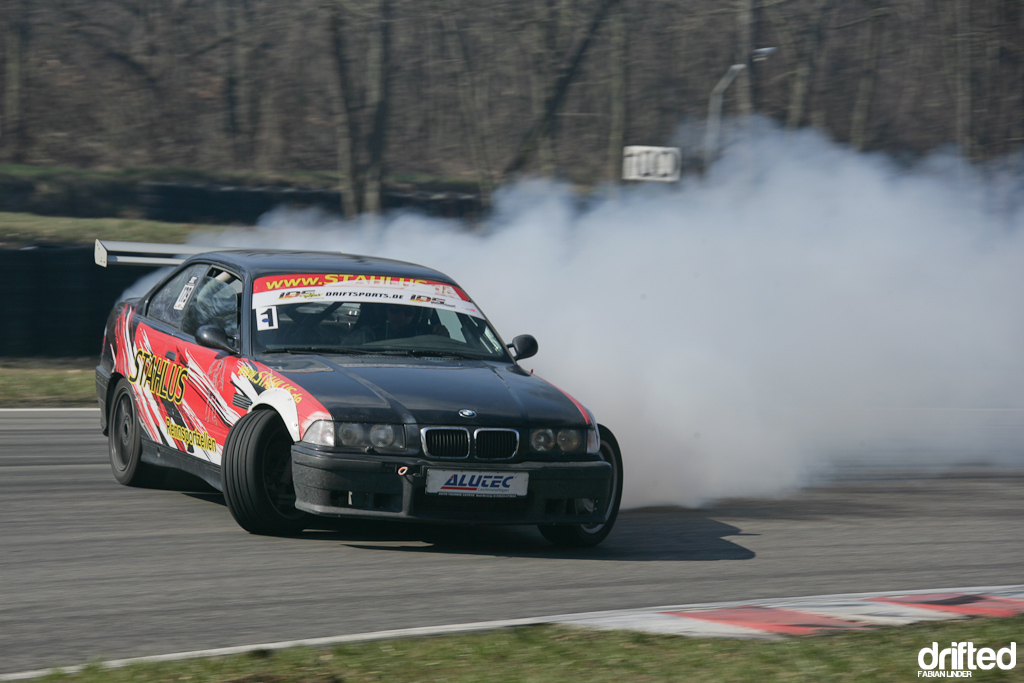 The second car by Stahlus Rollcages is this BMW E36. The big angle often killed the speed, but the smoke trail pleases the crowd.

Christian Maier is also member of Züridrift; his S13 has the classic missile look, although it isn’t his missile.

The Big Boy – Alex Rösch managed to manouver the big Corvette through the narrow track.

A teaser for the upcoming drift competitions; Joe Houndoni getting chased by Alain Thomet, a pairing we often saw at IDS events.

The CA crew – both two midgets are CA18 powered.

Once Alex got used to the narrow track he applied pressure to his mate “Johnny”, owner of Stahlus Rollcages.

After all the years of gold and white, Alain sprayed his S14 in a Plastidip Sand tone. 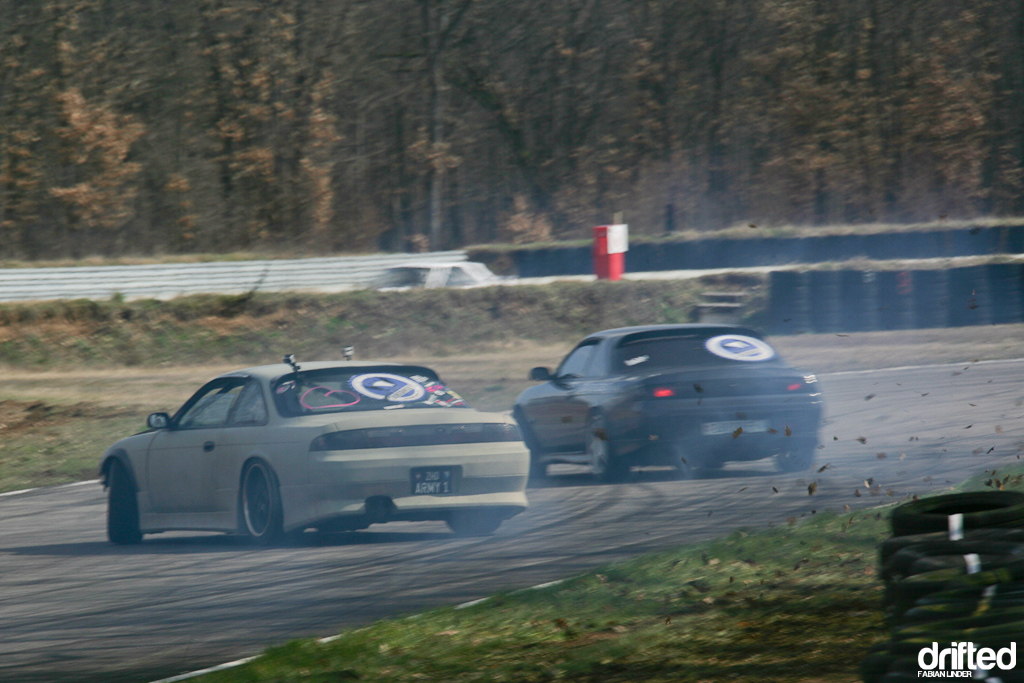 Nice weight transfer and off to the next corner.

The small Miata always tailed by a big white cloud.

The exhaust was placed on the right side instead of the left, where the stock exhaust was.

During the midday break new tyres were mounted and our French was practiced whilst ordering pizza.

Unfortunately one of his wheels broke during the session.

The Miata’s secret: a Nissan heart.

Team Züridrift equipped all of their cars with Bullbars – not sure about the reasoning, since there wont be many cows on the track 😉

Axel wants to show his manhood not only by his beard but also by a giant phallus on the windshield.

The interior of the JZ36 is far less childish.

Team Züridrift and the JZ36 in the pit 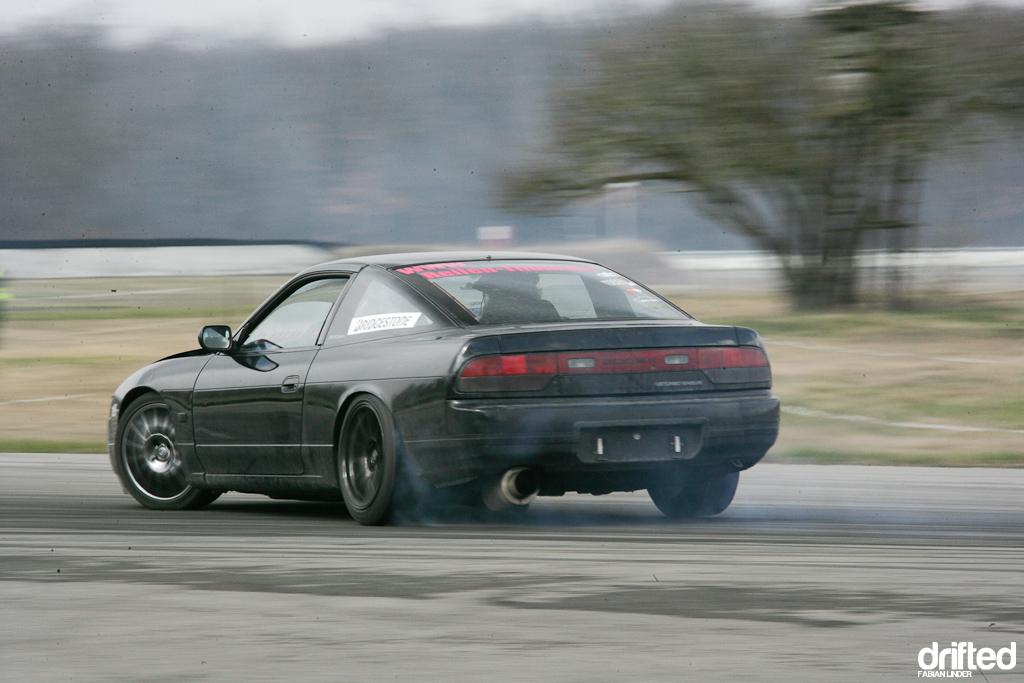 He had to change his front wheels, since one spoke broke during the session. Drifting is hard on the cars!

He had to use all the speed to get the Sierra sideways.

The Lancer front with a muscle car heart.

After the BMW V8, an LS2 was fitted in the Mituilvia-up.

After the break, snow started falling, which gave me an opportunity to explore. Last year this Corvette crashed and burned during an event; its still lying behind the guardrails.

Due to the wet conditions not many drivers were out; only the Miata enjoyed the snow.

The only photographer that joined me during the snow storm: David D-Famous.

A bunch of used tires in the mystical forests of Anneau du Rhin.

Kevin couldn’t decide which color he wants his front wheels, so he painted them in a rainbow scheme. 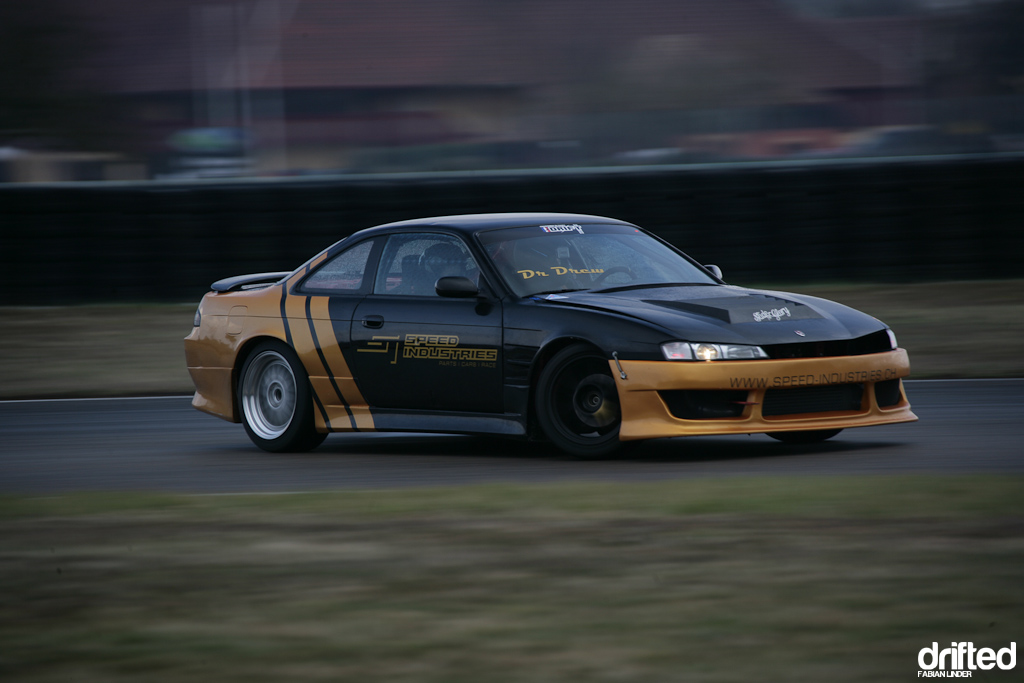 The rear wheels will soon be gold too, then the design will be one of my alltime favorites.

If you thought Sileightys are rare in the States, try to find one in Europe!

Alain Thomet’s S14 was Plasti Dipped by Driftmarket.ch; a cheap and good method to give your driftcar a new look.

Too small an angle wasn’t a problem for the Stahlus BMW, thanks to Wisefab.

There are not many comparable aggressive sounding engines like single turbo 1JZs. 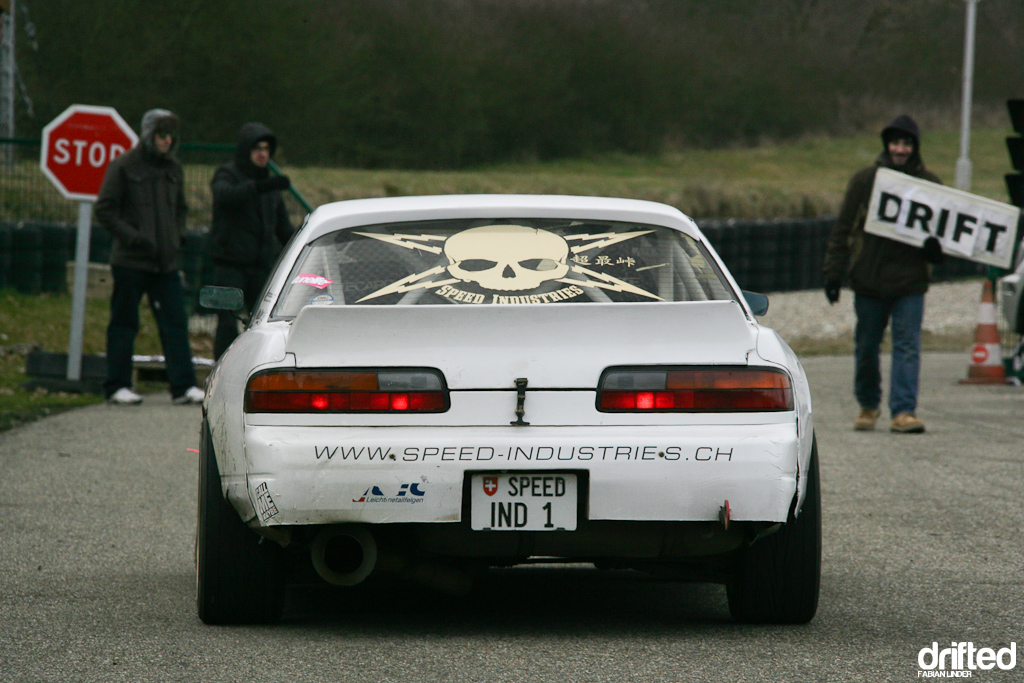 The host himself: Tobias Welti and his competition PS13 with Rocketbunny Tail and Touge.co.uk skull.

I think I´ve never seen Chris’s S13 with a rear bumper, and I’m sure I never will. 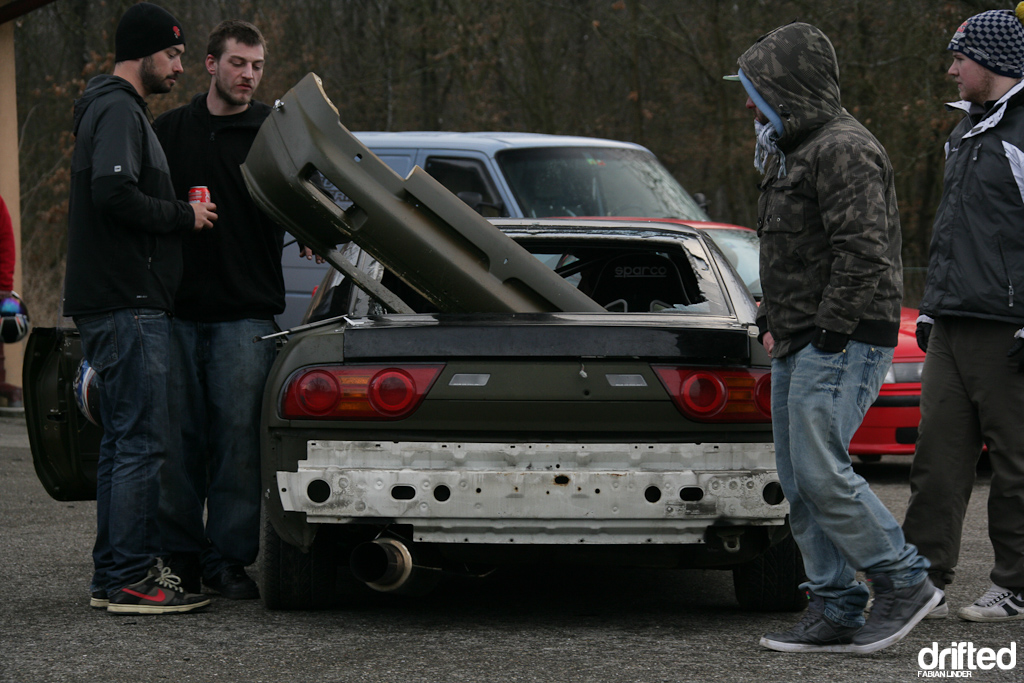 Oops. This swiss Mate hit the tires and broke his rear window, no problem, you don´t need rear windows to drift.

It was a day full of fun even though the temperatures never climbed above 3 degrees. I can´t wait for the summer events with my friends at Speed Industries.ch!

Written by Fabian Linder Born in Germany, living in Germany... addicted to drifting, photography and art...