Sunday was a brilliant opportunity to get to know all the drivers, they were lined up for autographs, photo’s, small interviews, whatever you wanted really. One of the things I can’t express enough is how down to earth all these guys are. Unlike any car club I’ve come across before!

Is there such thing as too starting too young? This dude was running 4bar (24v instead of 6) – enough to light the rears up no problem! Complete with oil temp, speedo and of course the ever important boost gauge. The next Duane McKeever?

Will: “So any problems with the car today or is she running 100 percent?”

Shane: “The cars unbe*******lievable, head gaskets blown on two cylinders, but there’s fuel in the cooling system and not water in the cylinders. So I’ll just give it some and hope for the best”

And with a blown head gasket he managed to get 2nd place. What a man!

Danny Eyles managed to make it a 1-2 for team Japspeed and took first after an insane battle with Shane. His S15 was looking beautiful and sounded a little understated… Compared to the roar of Shanes twin turbo V8 anyway. 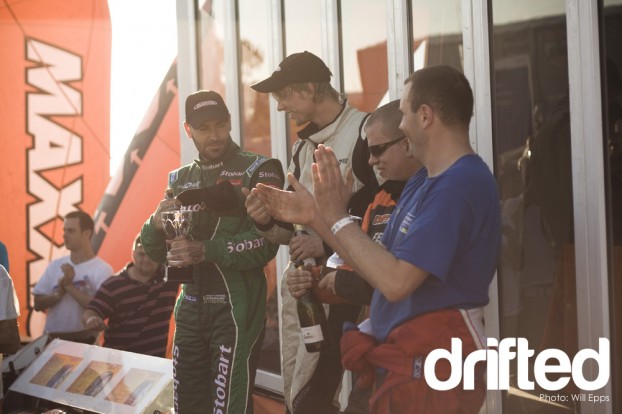 That’s it for my first instalment, stay tuned for smokey sideways action!