EVENT: British Drift Championship Round 2: Part I: Semi-Pro and Pro

Arenas around the world have long been places where crowds could flock to see great battles take place. The word ‘arena’ is synonymous with ancient images of grandeur, those of gladiators doing battle and fighting to the death for honor and glory. There was certainly less ‘death’ involved at Round 2 of the British Drift Championship MMXI (see what I did there) but the honor and glory still rings true. 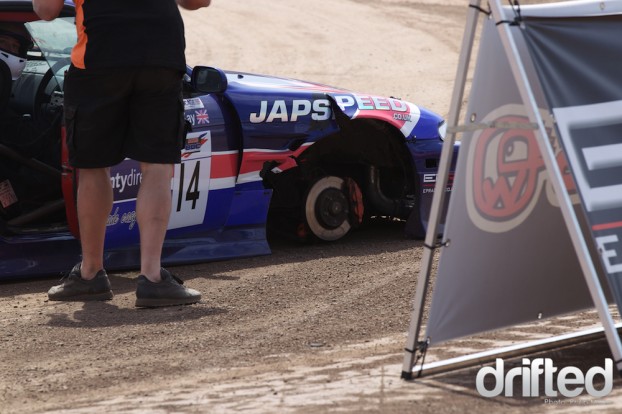 The word ‘arena’ is also Latin for ‘sand’ and was used as the covering of choice in years gone by for its excellent ability to soak up a fallen warrior’s blood. Or coolant, or engine oil. I know from personal experience a couple of years ago that Norfolk Arena in Kings Lynn can claim it’s fair share of mechanical victims. A day spent on your back in the dust changing a shattered gearbox is not a day spent having fun.

Norfolk Arena is primarily used as a shale stock car and speedway oval, hence the abundance of dust. When drifting is in town we move infield and use the tarmac centre of the oval to create a technical track that really levels the playing field. Horsepower counts for nothing here, this small track tests a driver’s ability above all else. 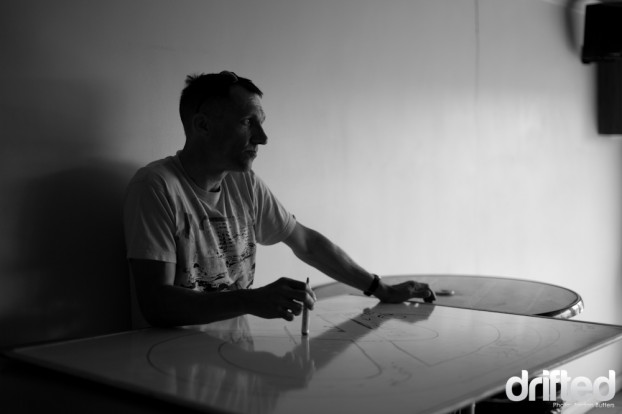 BDC front man Mark ‘Sweeps’ Buckle ponders for a moment before driver’s briefing. Track layout, clipping points and which lairy shorts to wear going through his mind no doubt.

From watching practice and qualifying it was clear to see that this event was anybody’s for the taking. The Arena has played host to the BDC for a number of years and always pulls in a crowd. 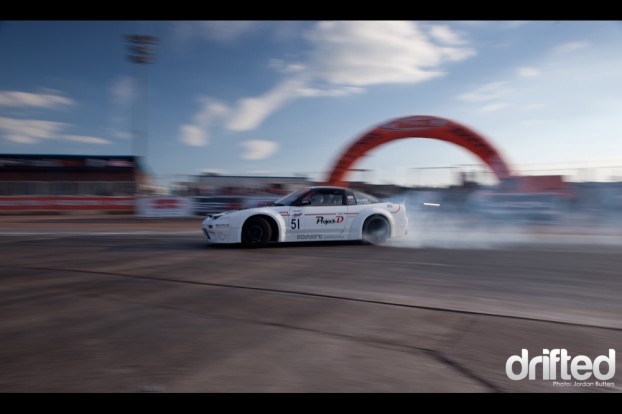 The grandstands and terraces surround the track 360 degrees and its only by taking a walk around the perimeter of the track that you can really appreciate how many people are here to see the action.

The Semi Pro Class were first out in Saturday morning’s qualifying session. The Semi Pros are the most unfamiliar with the BDC regulars like myself. Every year the championship brings more and more new blood into the ring, hoping to work their way up through the ranks.

Its great to see Jeek’s E39 540 in competition. The V8 engine sounds glorious resonating around the walls of the Arena. 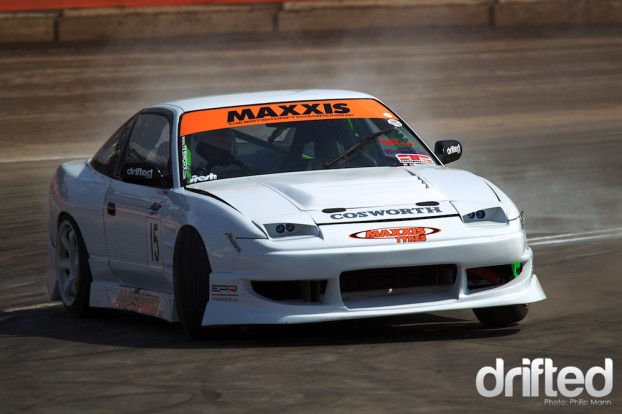 Ian Waddington’s S13 was looking pretty angry as it tore around the track. The aggressive Works9 kit and DMAX bonnet adding to the look. 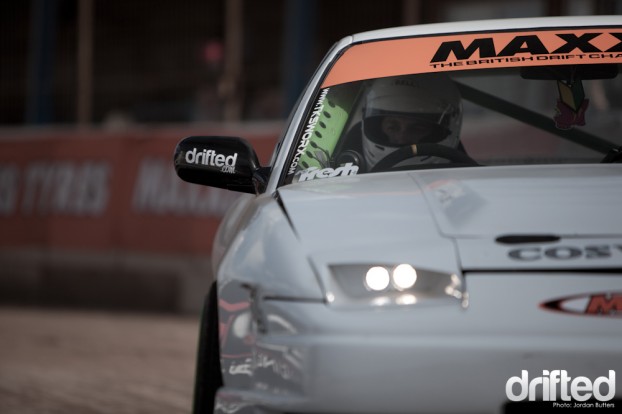 The tiny Supermade-style lamps pierced through the smoke of the lead car. Notice the new 2011 Drifted wing mirror decals!

Matt Stevenson’s fantastic BMW V8-powered Silvia (right) seemed to agree with the settings at Kings Lynn. Matt was adjusting to his new V8 powers but managed to progress to the Top 8 on the day. 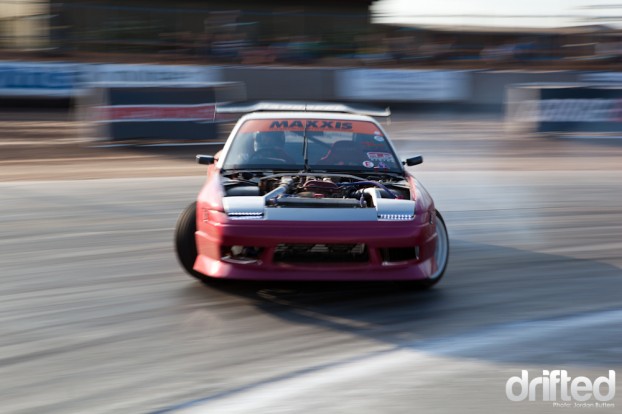 Mark Lappage is a driver who we have seen improve over the seasons and is coming into his own, pushing his candy pink S13 hard he attained 3rd qualifying place in Semi Pro. 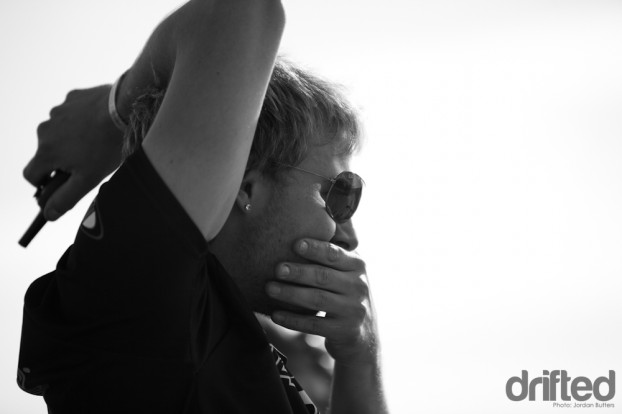 Super Pro driver Steve ‘Baggsy’ Biagioni acts as Mark’s ‘spotter’ and tensely awaits news of one of Mark’s results. He makes it as far as the Top 8 in Semi Pro before being sent packing by Lewis Cracknell in his grey S13. 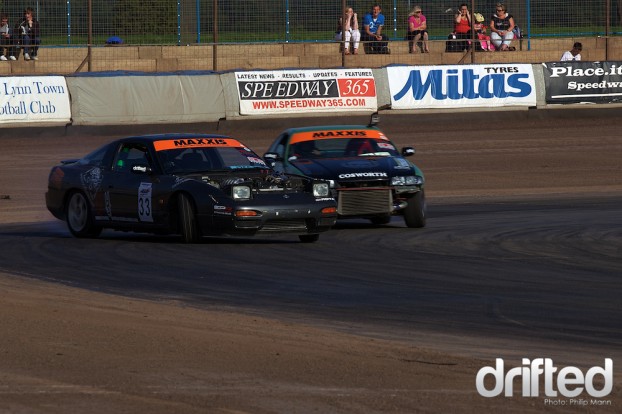 Lewis narrowly missed out on a podium position to Team Green’s Christian Lewis who clinched 3rd place in the Semi Pro Class.

Boom! Touge Automotive’s Turbozilla helping Christian drop bombs on the competition, or something. 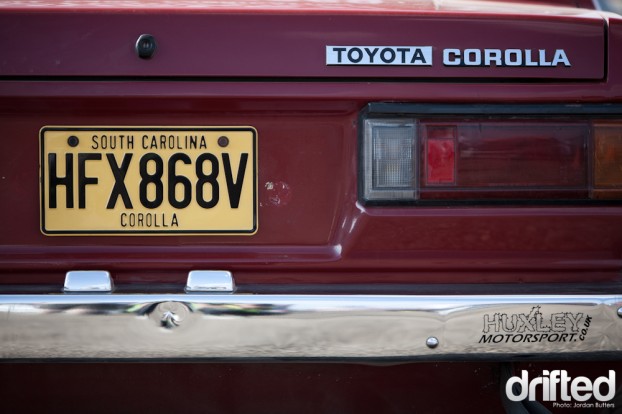 One of my favourite cars in the Semi Pro Class has to be Marc Huxley’s SR20 powered KE70 Corolla. Complete with South Carolina license plates, just for the heck of it. Marc managed to peddle the Corolla to top qualifier on the day but sadly didn’t progress past the Top 16. 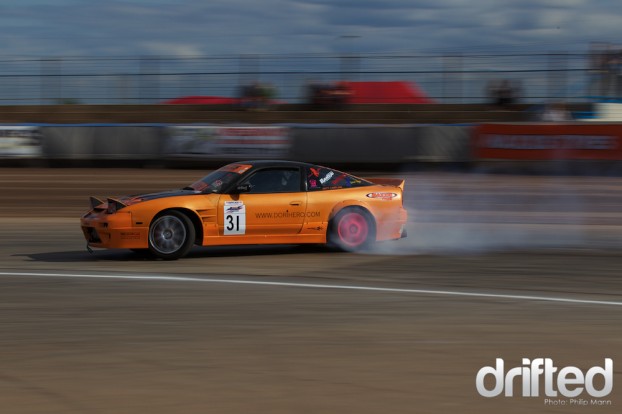 Local driver Matt Campling is well versed with the layout at the Arena. His flame-licked orange and black S13 was certainly different! Several people were trying to work out the giant STICKER! over the weekend and it’s meaning. 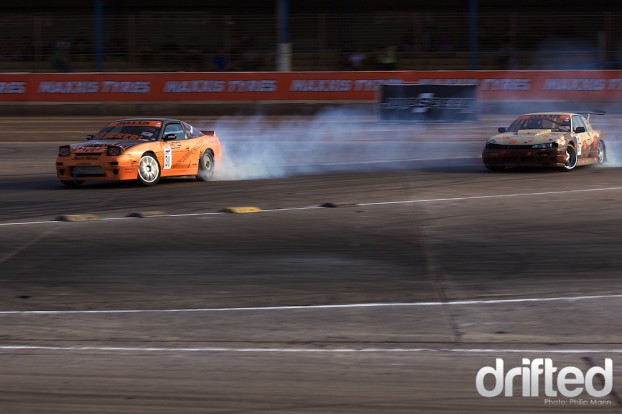 Matt took 2nd qualifying spot and went on to take the top spot winning the Semi Pro Final against Owen Taylor in another (and rather bizarre in appearance) V8 Silvia. 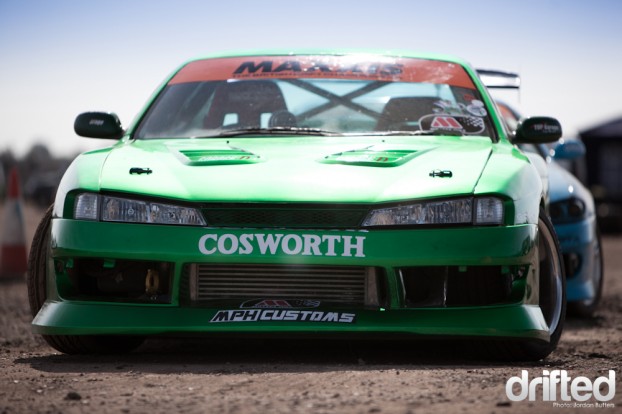 Semi Pro driver Danni Murphy in her ‘Green Monster‘ had the opportunity to gain promotion at Round 2 which she dually did, qualifying in 2nd place in the Pro Class! She will play out the rest of the season with the Pros. 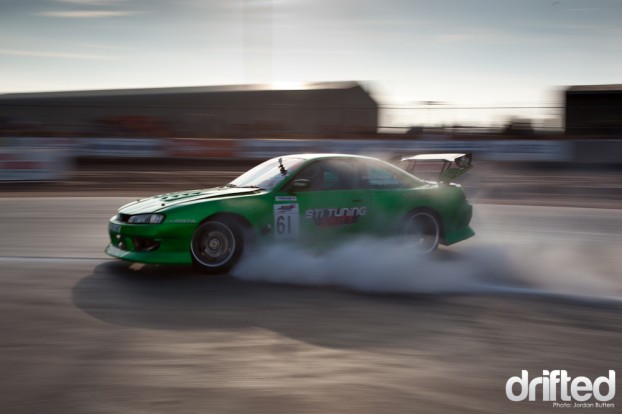 Danni reached the Top 16 of Pro Class at the sun set over the Arena before being smoked out by Michael Marshall’s SSR Professor equipped S15. 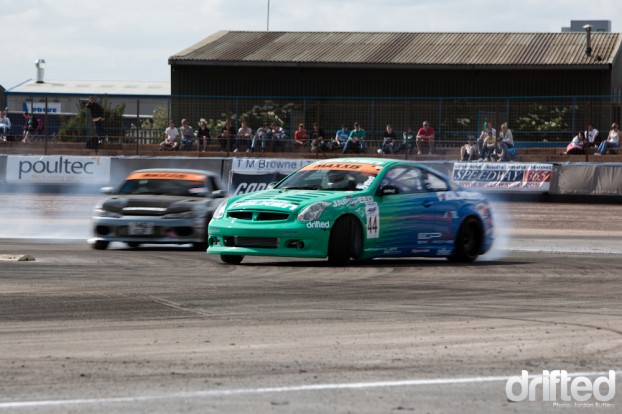 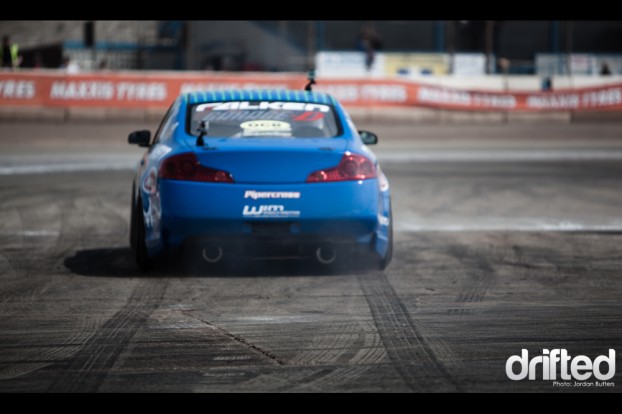 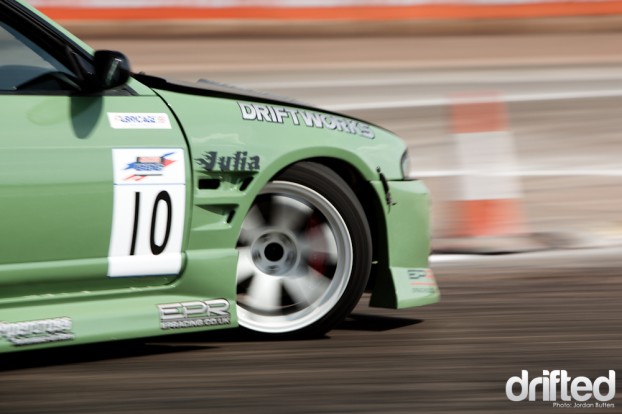 Roger Cooling of Team Green’s R33 has undergone some cosmetic changed for 2011, including the team’s mandatory colourway. Roger is another Arena local.

Matt House peers across from the seat of his LS powered RX7. Moments later the ground shakes and the FD3S launches from the line. 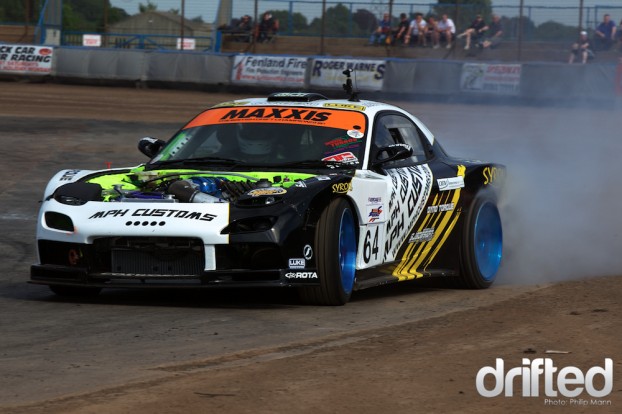 Notice the Racelogic camera on the roof? The Team MPH Customs cars have some very trick kit on board providing them with GPS tracking and real time data logging, more to come on this soon.

And team mate Phil Maclachlan (who I am now referring to as PMAC as I am fed up of checking his surname spelling) looked to be getting to grips with his LS-powered V8 Silvia, ‘PMAC’ secured 16th qualifying spot. 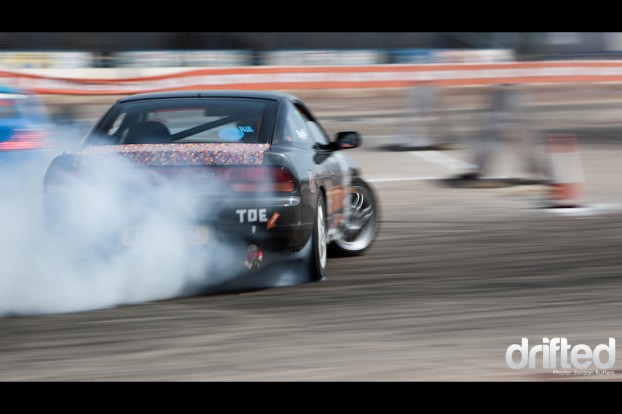 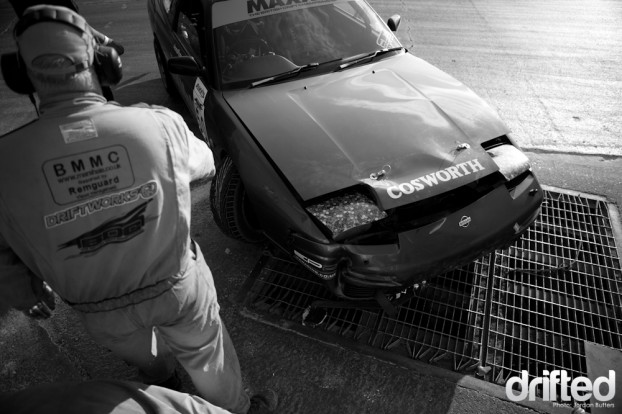 Sadly during the Top 8 runs Chris met one of the solid clipping points and took some front end damage before limping back to the pits to fight another day.

Its takes a shunt to move the giant tractor-tyre-come-clipping point! Heavy machinery is employed to put it back into place. 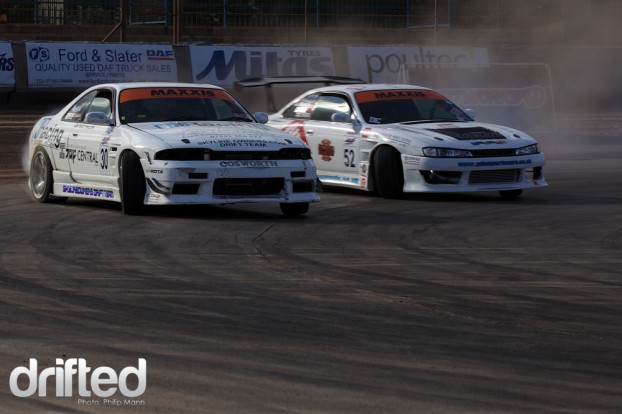 Nathan Chivers chases down the V8 R33 of Ian Phillips and progresses as far as the Top 16. 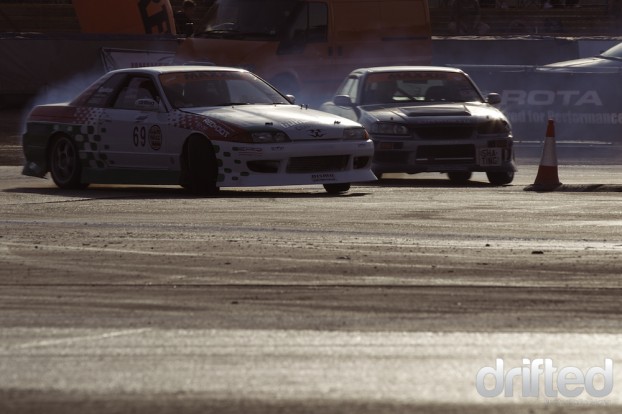 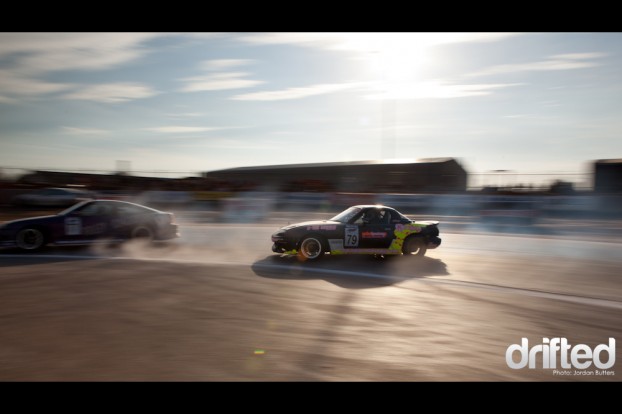 Jamie Kenyon put up a strong fight in his SR20 MX5 but was ousted by Round 1 Pro winner Grant Laker in his purple S13.5. 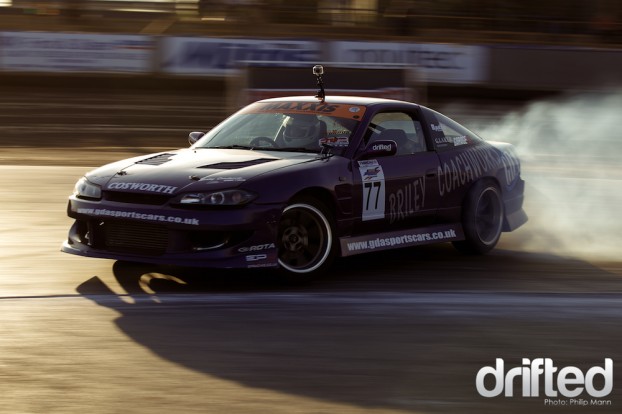 Grant went on to take first place at the event again, his second consecutive victory, putting him head and shoulders above at the top of the table! 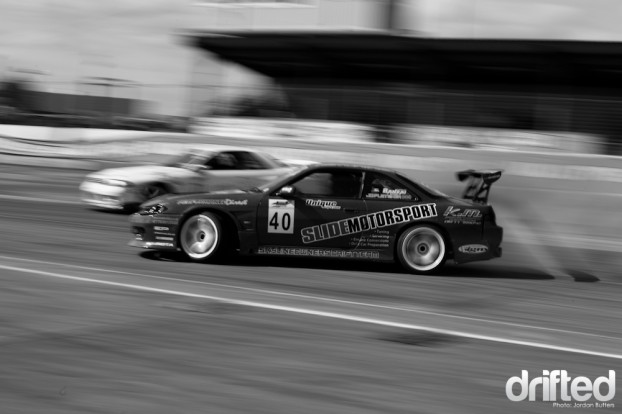 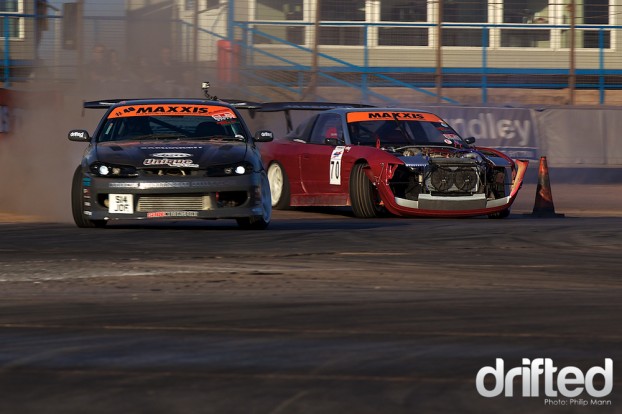 The super-aggressive driving style of Jody Fletcher served him well in the fight, after making his way through to the Semi-Finals.

Before bowing out to Adam Day in his black and orange R33.

Adam couldn’t match Grant in the Finals however and took second place. 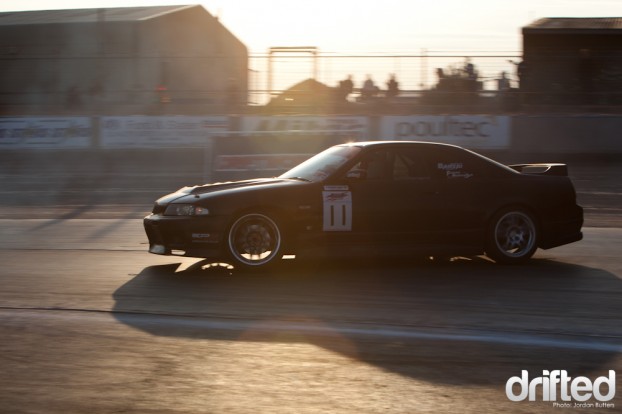 Another black R33 and another Adam, Adam Blackwell drove consistently all day and reached the also reached the Semi-Final in his black R33. 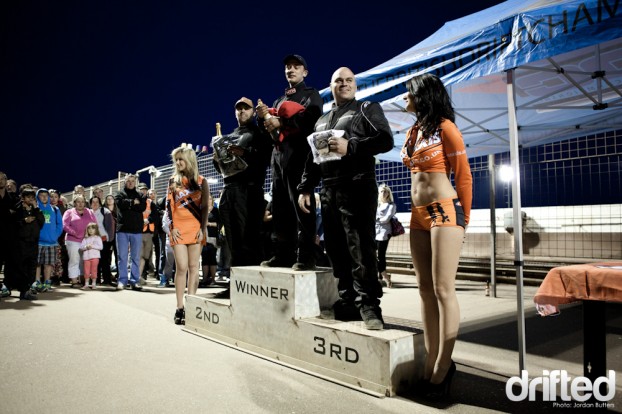 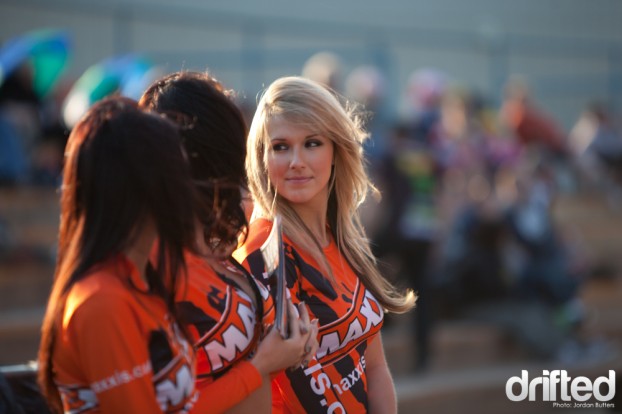 As night fell and with the Semi Pro and Pro winners decided it was time for the main event under the floodlights of the Arena. Keep an eye out for Part II and the Super Pro Class shortly.