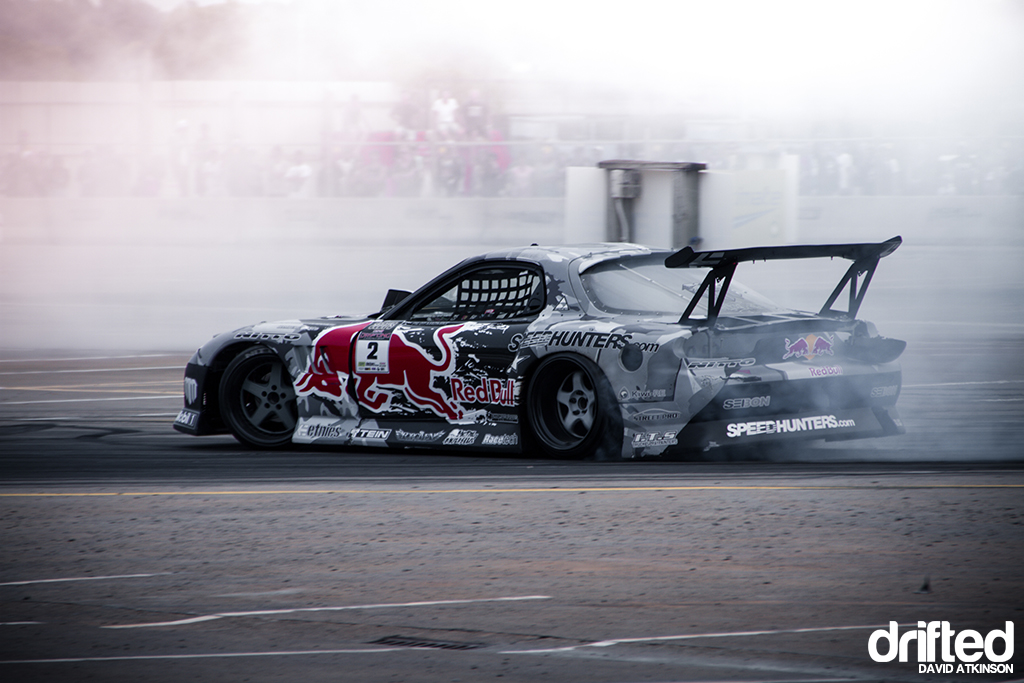 It was hard to find a fault with the plan for Round 3 of the Cody’s D1NZ National Drifting Championship. Held in sunny Tauranga on another technically challenging, custom built circuit it was bound to be a success from the get go. However it was the first time a drift event had been held in Tauranga city and nobody was sure what kind reaction the event would receive.

Any thoughts of a low turnout were quickly put to rest on the morning of Friday practice. It was just after 8am and there were already crowds of people waiting to get through the doors for the 9am opening! 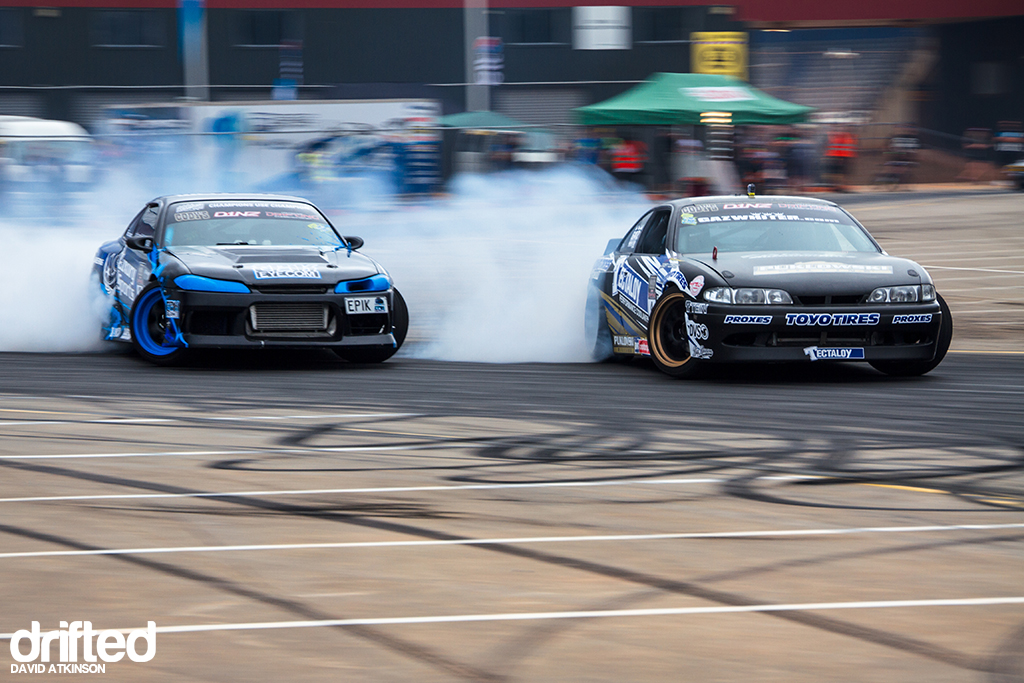 Along with huge crowds and perfect weather the track layout was top notch. It reminded me of a miniature Irwindale speedway out of Formula D. Essentially a large ‘S’ layout, the track began with a long left entry and switched into a right turn with outer clipping points. Littering the edges of the track were plenty of concrete barriers which would no doubt cause some carnage over the weekend. 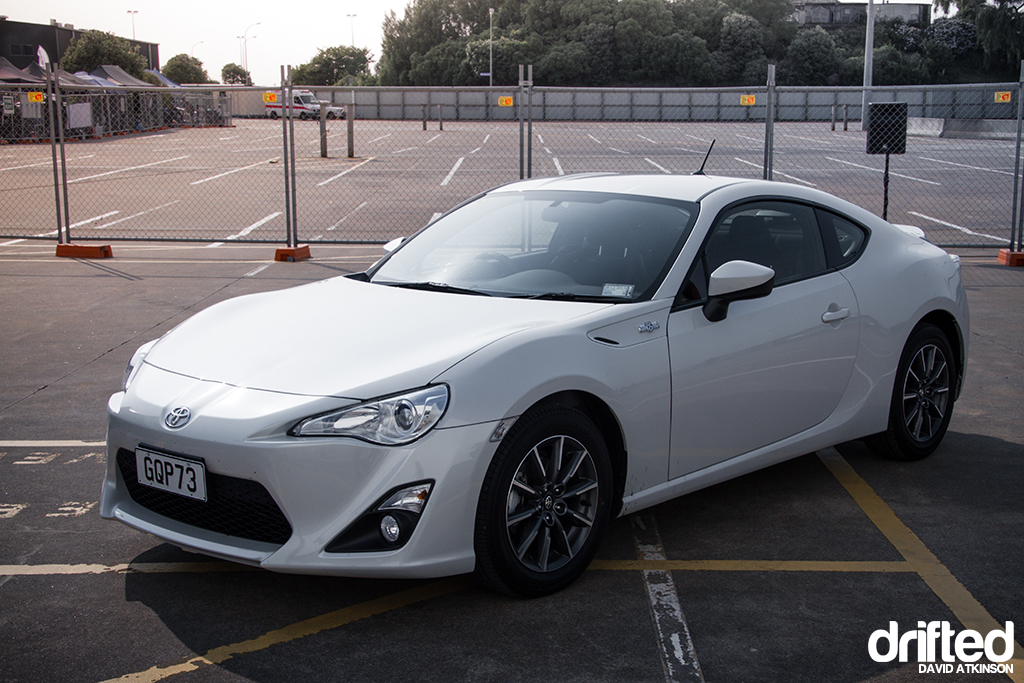 New Zealand only received a small initial shipment of the Toyota GT86 so it was quite nice to spot this one parked near the track. 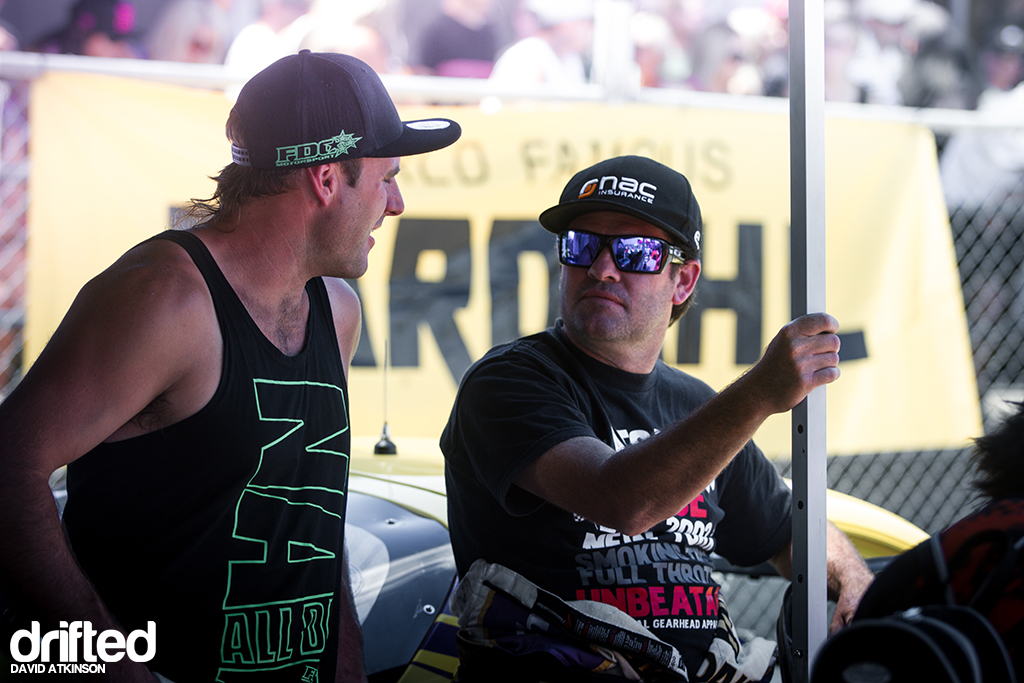 I spotted current series leader Fanga Dan talking to Achilles/ NAC driver Daynom Templeman in the pit area. Drifting has a great atmosphere and it’s cool that the different teams get along with each other. 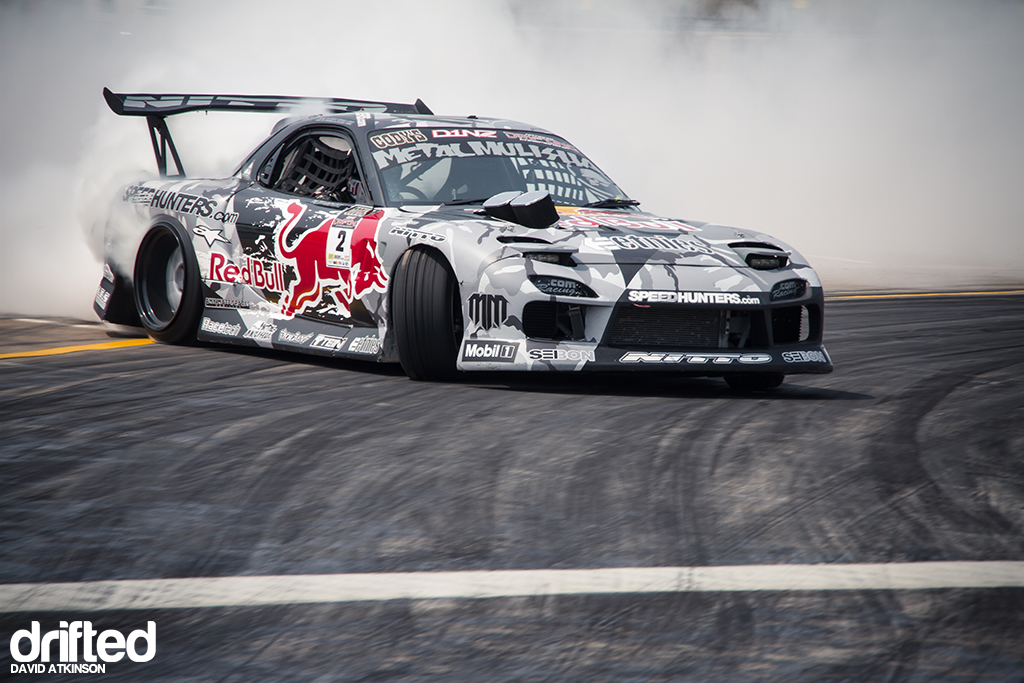 Mad Mike Whiddett was on top form in the ‘Madbul’ RX7 during the Friday practice. In the shot above you can see the rear tyre perfectly lined up with the yellow paint marking the edge of the circuit. It didn’t stay yellow for much longer!

Gaz Whiter looked like he was really enjoying the track setup, tapping the wall on entry several times throughout practice.

I always enjoy attending the practice day before the main competition. These laid back drift sessions give you a chance to experiment with different styles of photography.

Speaking of photography – it’s always cool to see what gear people are using out on the track. I spotted this little Fuji X100 hiding away here, it’s a superb camera! 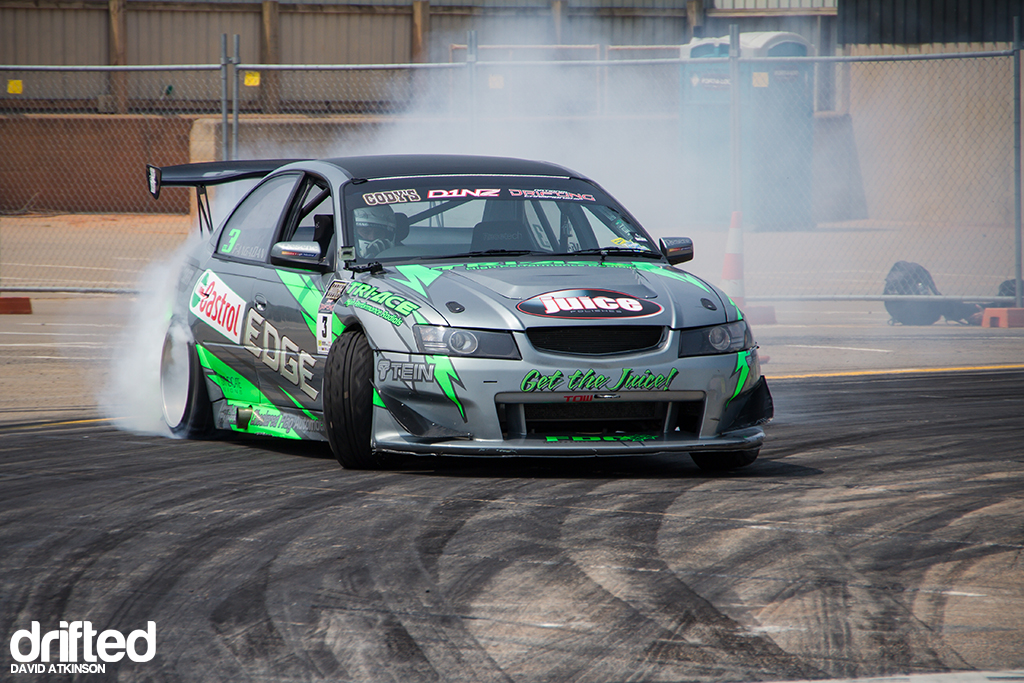 Fanga Dan was another driver using up all of the available space on the track, pushing right to the outside clip points.

There was a lot of discussion going on in the pits about the new track layout and different styles of entering the first corner. Many drivers were taking a wide line early on which meant the car was too shallow in the following turn. 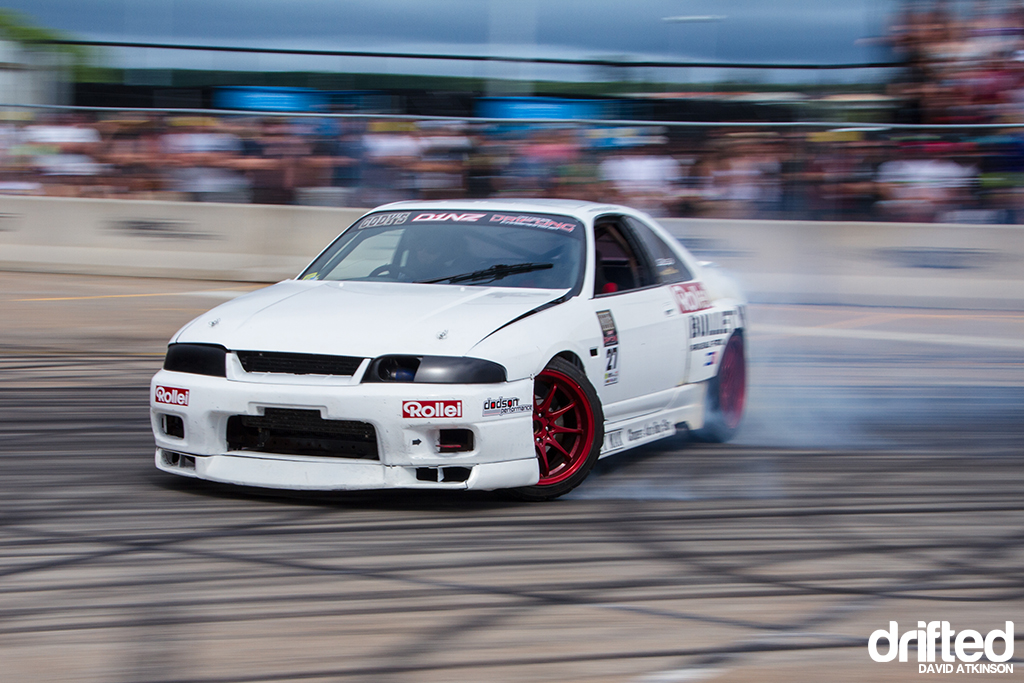 The R33 driven by Zak Pole was looking in much better shape this round, having repaired the damage from Whangarei.

Daynom Templeman and the team decided to cut the rear end off the RX7 just three days before the event to add tube framing. Luckily everything was finished in time and he went on to qualify 14th.

Both Shane Allen and Shane Van Gisbergen were sharing piloting duties of the big ‘Rattla’ Falcon over the weekend. This huge horsepower car isn’t really suited to small tracks and both drivers had to fight to control it. 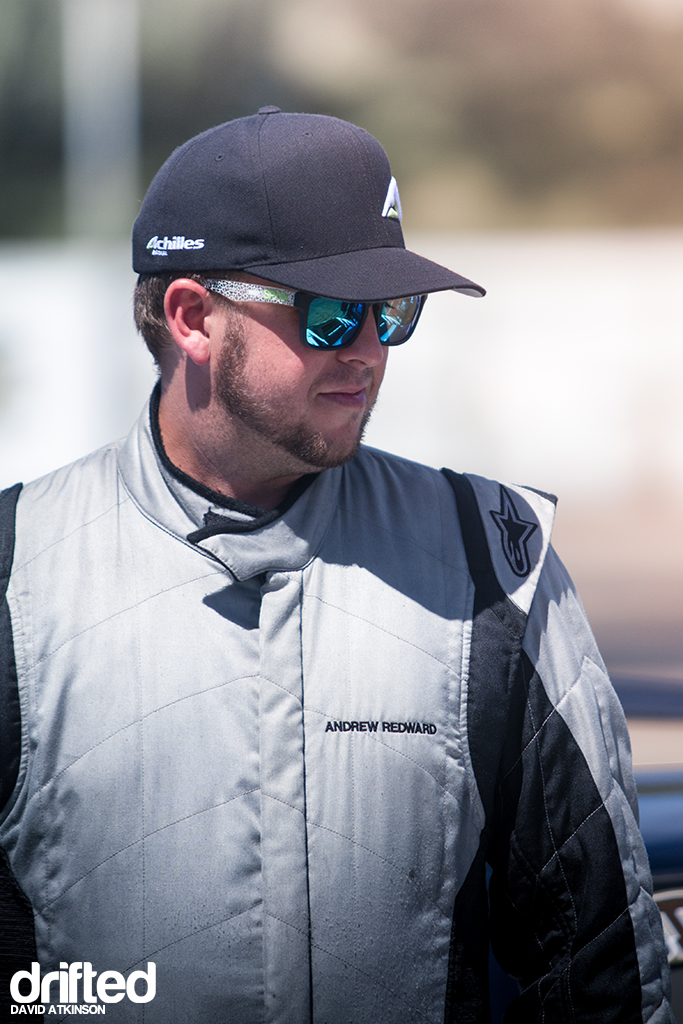 Andrew Redward was looking calm and collected in pit-lane. His driving has been spot on lately, landing him in 4th place in overall championship points. There’s no doubt he would be aiming to improve on that this weekend however. 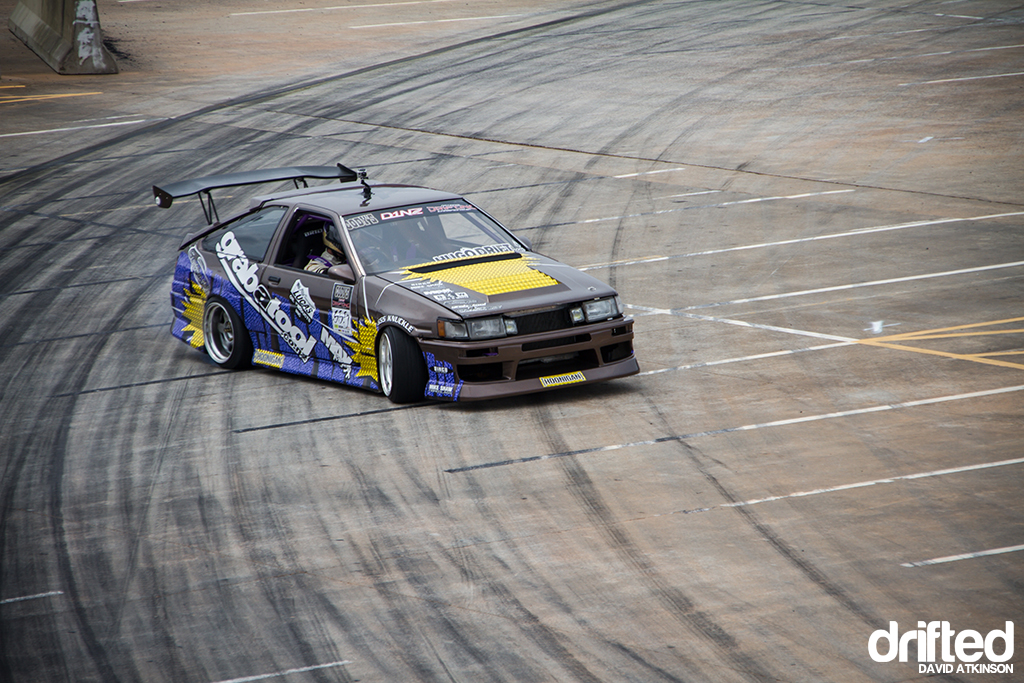 Hugo Maclean seemed to have solved the engine problems he was having last round and was throwing the little Corolla around with confidence.

One of the loudest cars of the day – Mad Mike had to add extra muffling to the quad-rotor Madbul to meet noise restrictions before battles started the next day.

Local Tauranga driver Cole Armstrong was looking to put on a good show for his home crowd and he did just that, maintaining a good amount of angle all the way to the end of the circuit. 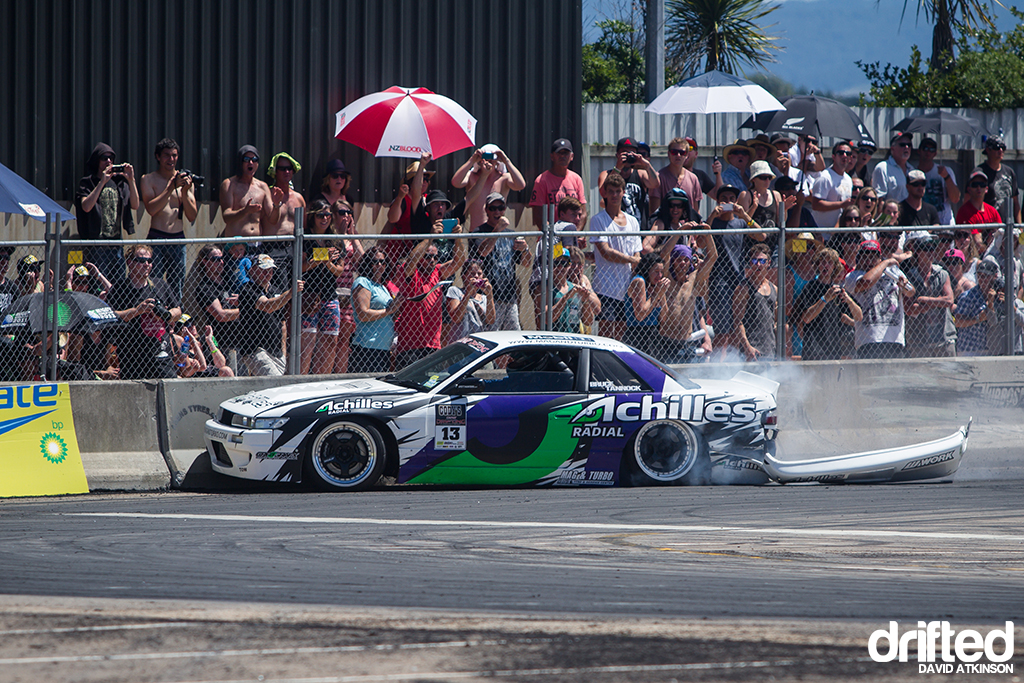 Bruce Tannock had an unfortunate incident with the wall in his battle with Hugo Maclean, damaging both the Rocket Bunny kit and Work Meisters. Sadly this wasn’t the last accident we would see today. 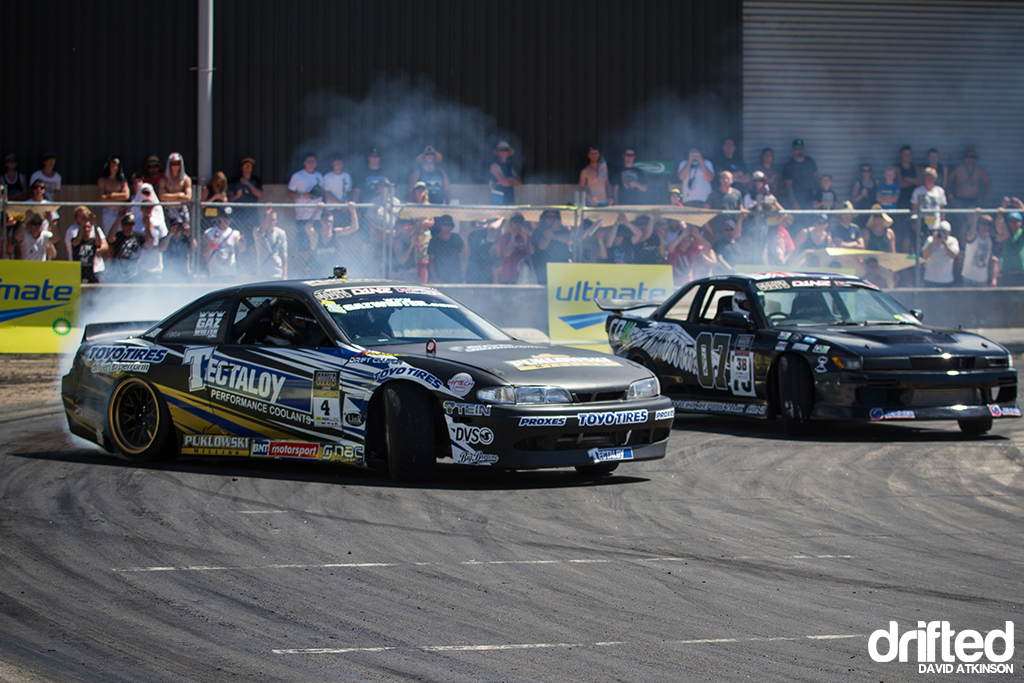 …When he tapped the wall on entry sending the car spinning around and smashing into the wall. A catastrophic collision for the Silvia but luckily Whiter was not injured. You can actually see him floor the gas pedal once the car was heading backwards – knowing he would hit the wall but aiming to reduce the impact. 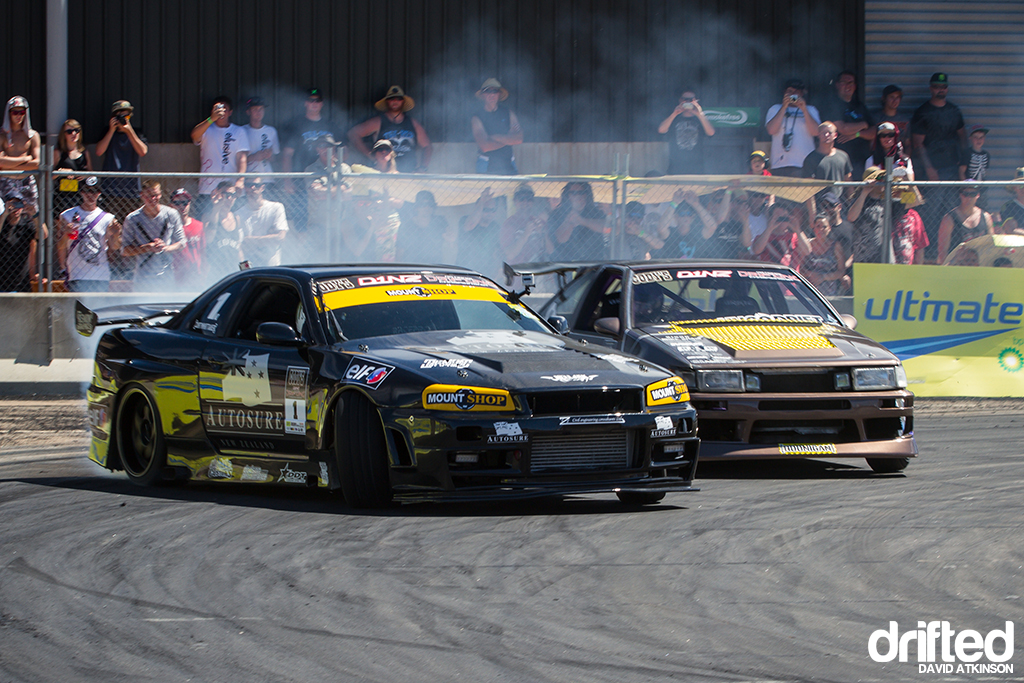 Hugo Maclean surprised everybody by taking down current champ Curt Whittaker in the top 16.

The judges had a good spot above the sweeping entry point to keep an eye on everything. 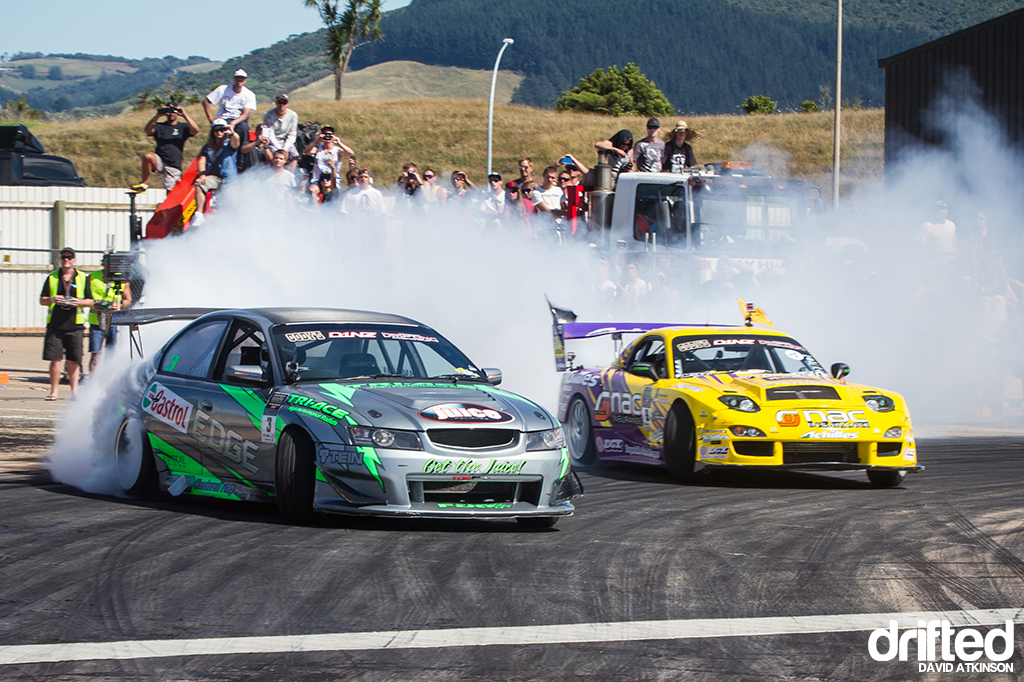 Consistent and skilled driving from Fanga Dan saw him into the top 8 in his battle against Daynom Templeman.

Troy Forsythe out-drove the C33 Laurel of Jason Sellers but was eventually knocked out by Andrew Redward. 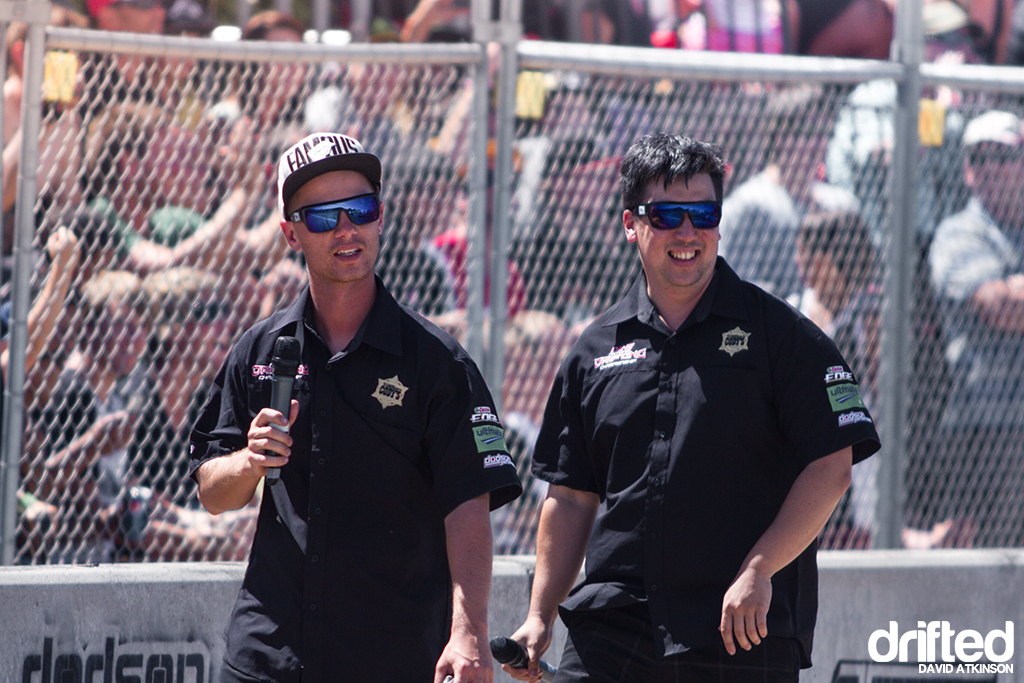 Event director Brendon White and commentator Warren Sare were both out manning the microphones and running an awesome show for the crowd. 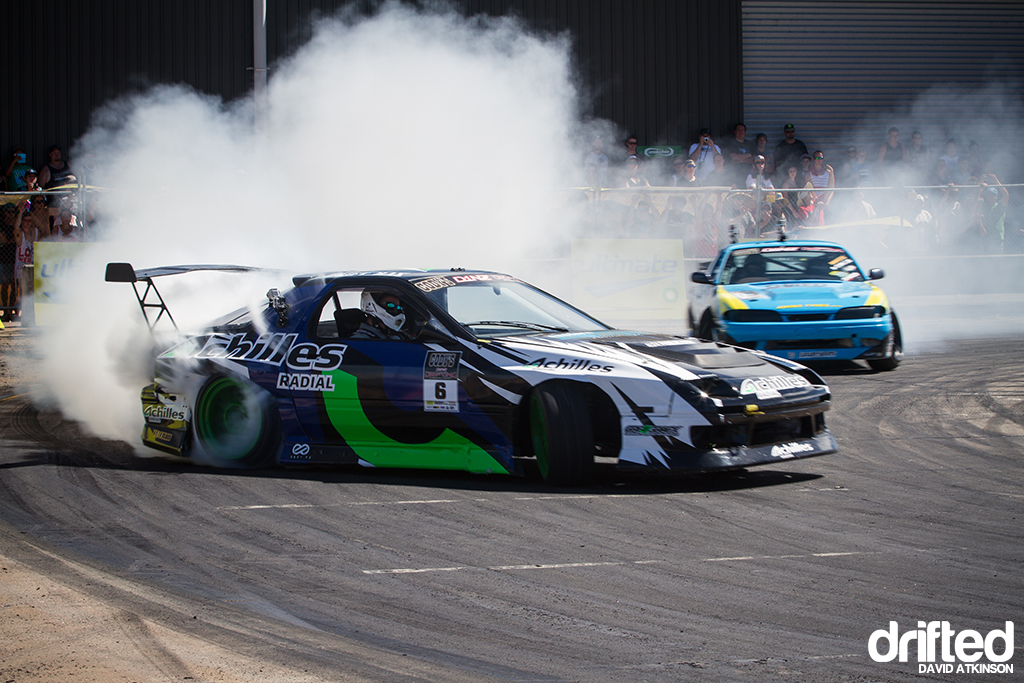 Andrew Redward was charging fast in the RX7, beating Bradley Lauder in a repeat battle of last round.

Fan favourite Cole Armstrong was beaten by Nico Reid in one of the best battles of the day.

Zak Pole eliminated both Robee Nelson and Shane Van Gisbergen before going on to battle Fanga Dan. Check out that wall rub! It wasn’t enough to win however and Fanga Dan moved through to the top 4. 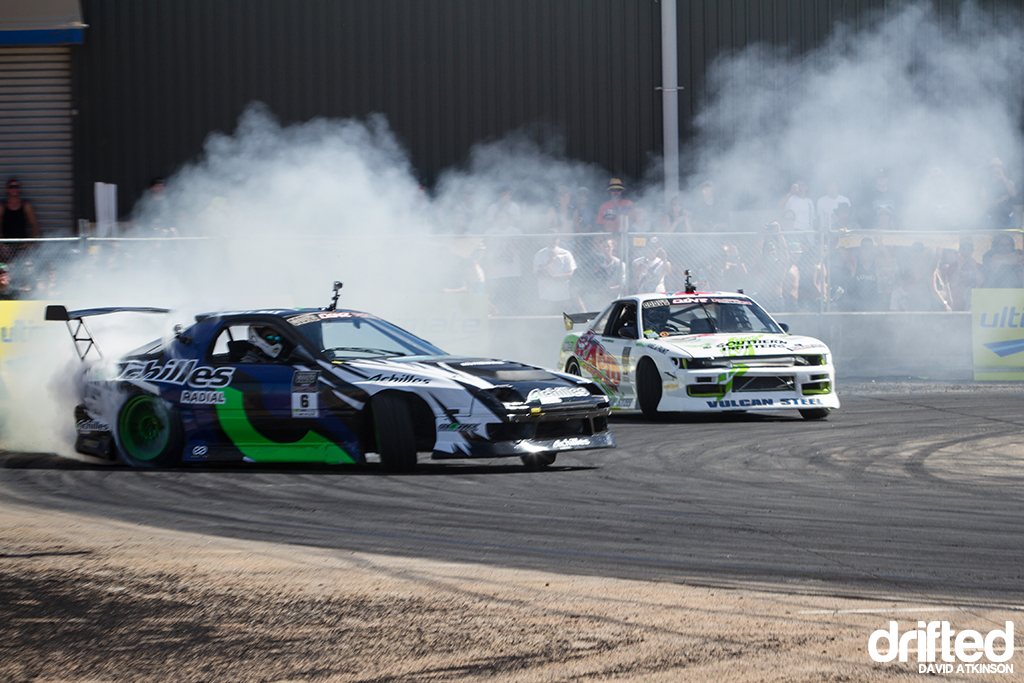 The next battle of the top 8 saw Andrew Redward take down south-islander Troy Forsythe and move on to the top 4. 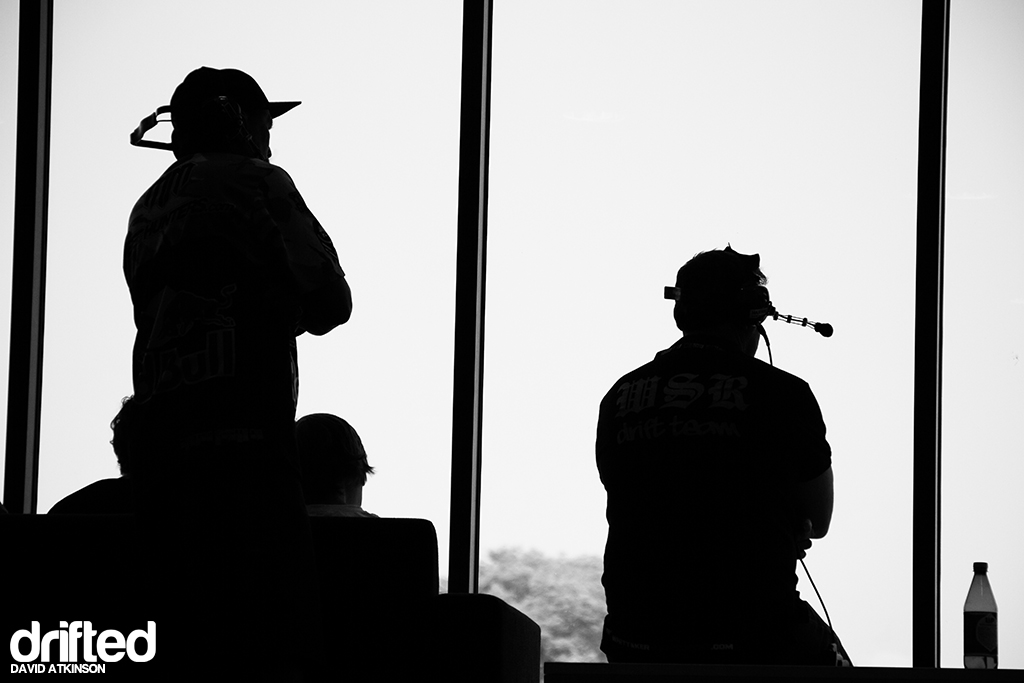 The spotters had a good spot high up in the second floor of the arena to relay info to the drivers.

Mad Mike was another to fall victim to the wall on the second turn. Surprisingly he was able to repair the car for his battle against Nico Reid but the damage was still affecting the car and he spun, giving Nico the advantage. 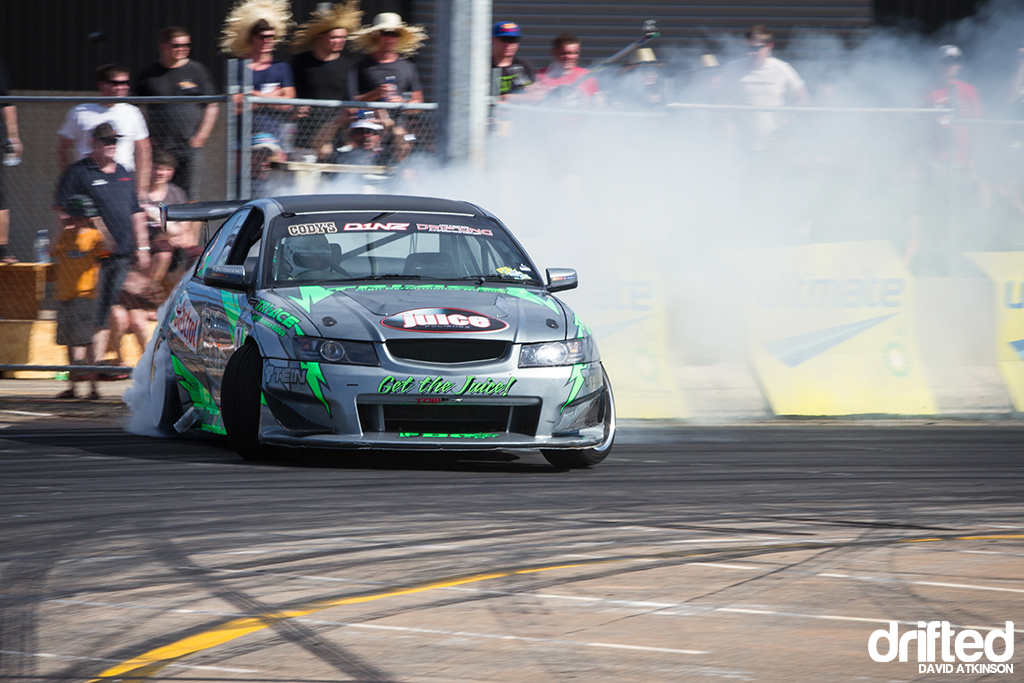 The top 4 gave Fanga Dan a tough battle against up and comer Nico Reid, but Woolhouse showed his experience and was given the win. 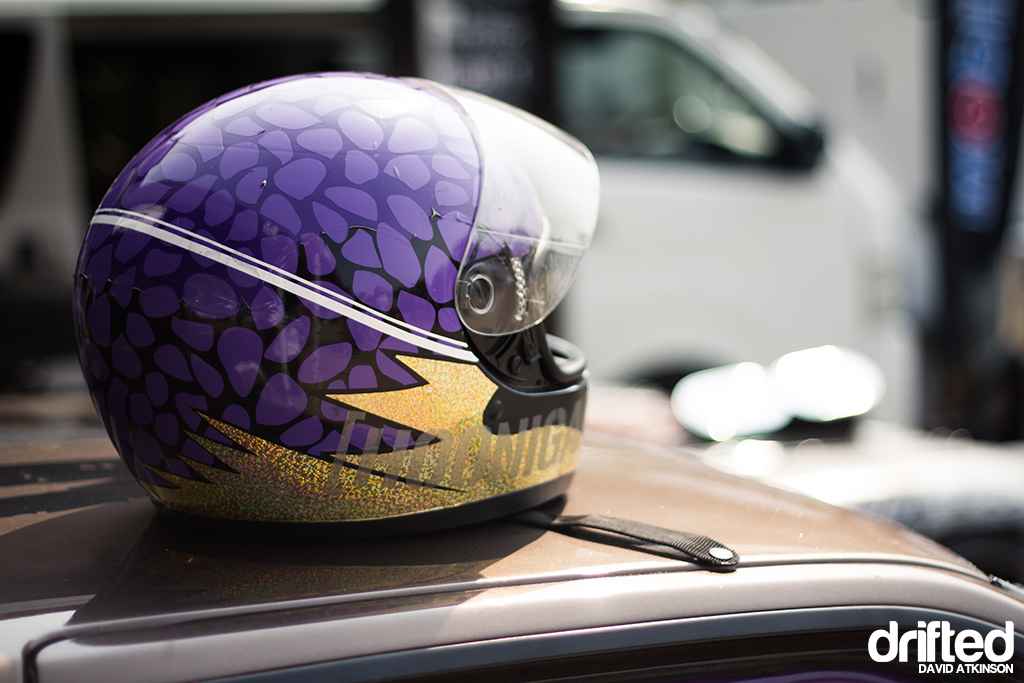 Hugo Maclean had really stepped up his game this round, beating Tannock, Whittaker and Falconer to show he really was on a roll.

So there was no saying what would happen going in to his top 4 battle against the more experienced Andrew Redward. An excellent chase run swung the battle in favour of Redward who moved on to battle Fanga Dan in the final battle while Hugo would come up against Nico Reid for the 3rd spot decider.

Nico Reid drove well in the Luxury Sports S15 – giving the wall a tap as he entered the corner. Hugo Maclean put on an amazing chase run however and was right alongside Nico throughout the track, earning him the win and 3rd place overall. 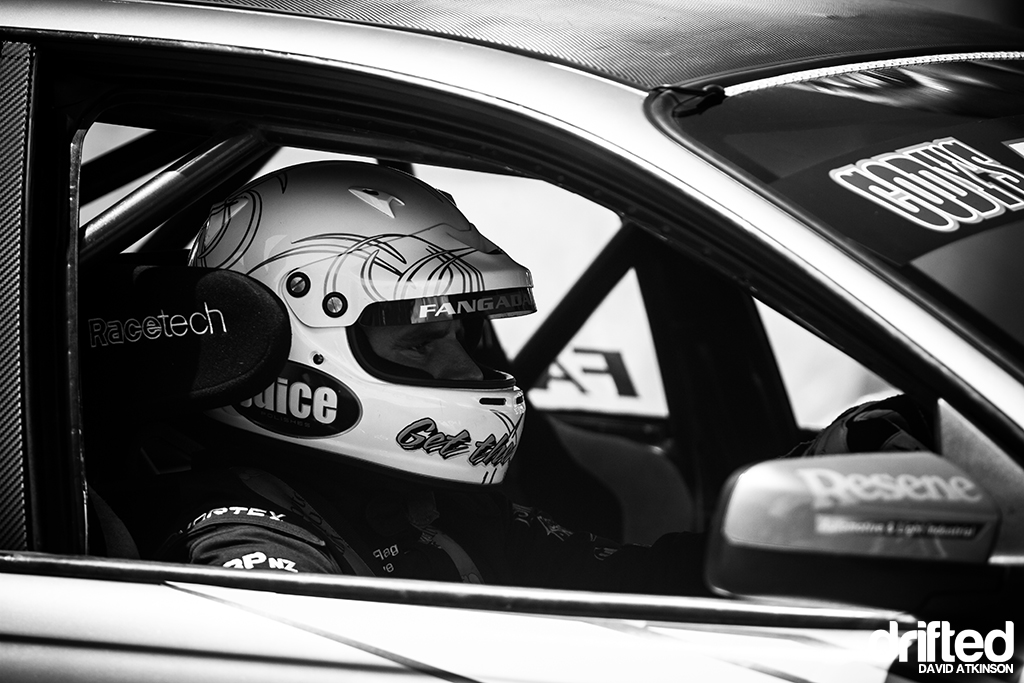 Onto the final battle of the day with Fanga Dan versus Andrew Redward. 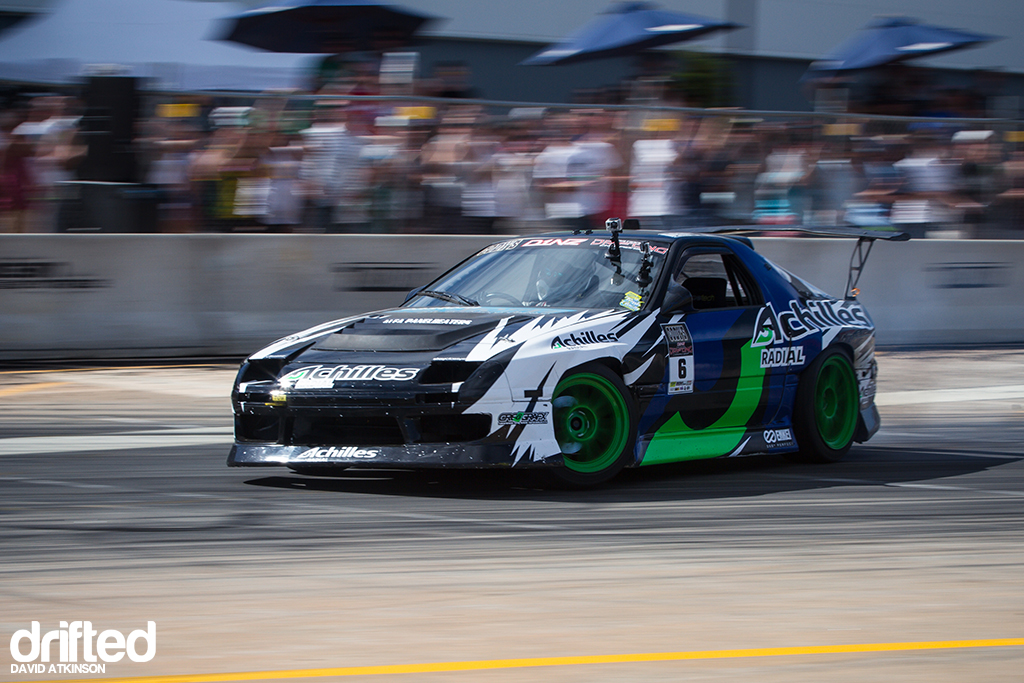 Both drivers had performed outstandingly over the weekend and there was no telling who would take the win. A small mistake at this point would give a huge advantage to the other driver. Unfortunately that’s exactly what happened for Redward, who was door to door with Woolhouse until the final corner which sent him spinning. 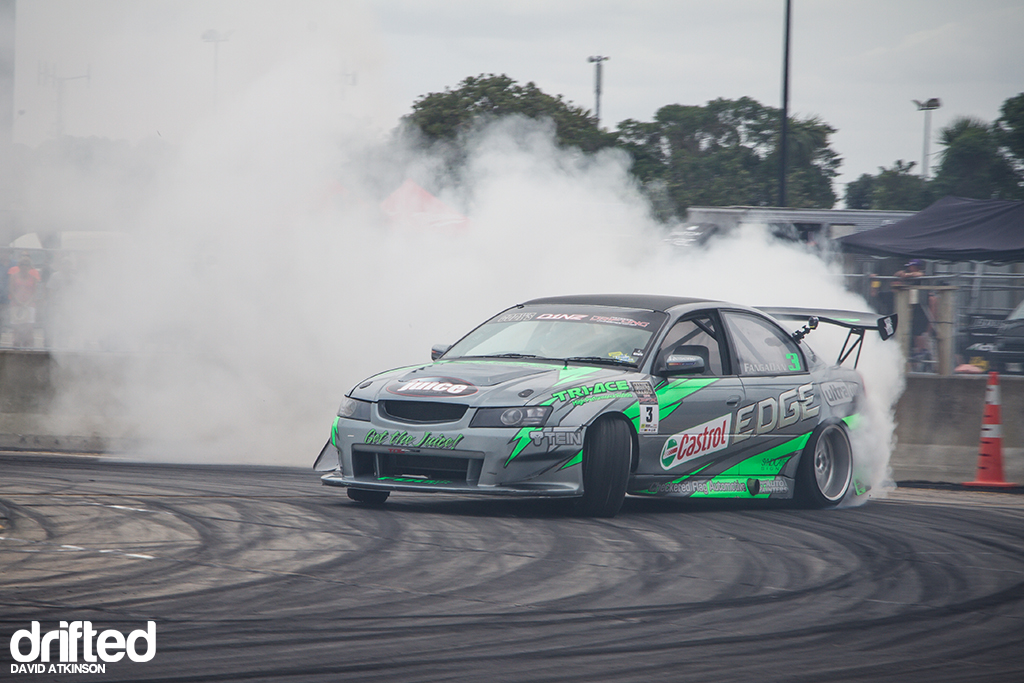 With a 10-0 lead to Fanga Dan it meant he could simply sit back on his chase run and take it easy. On another day though I’m sure this battle could have gone OMT more than once, as both drivers have a great deal of skill. 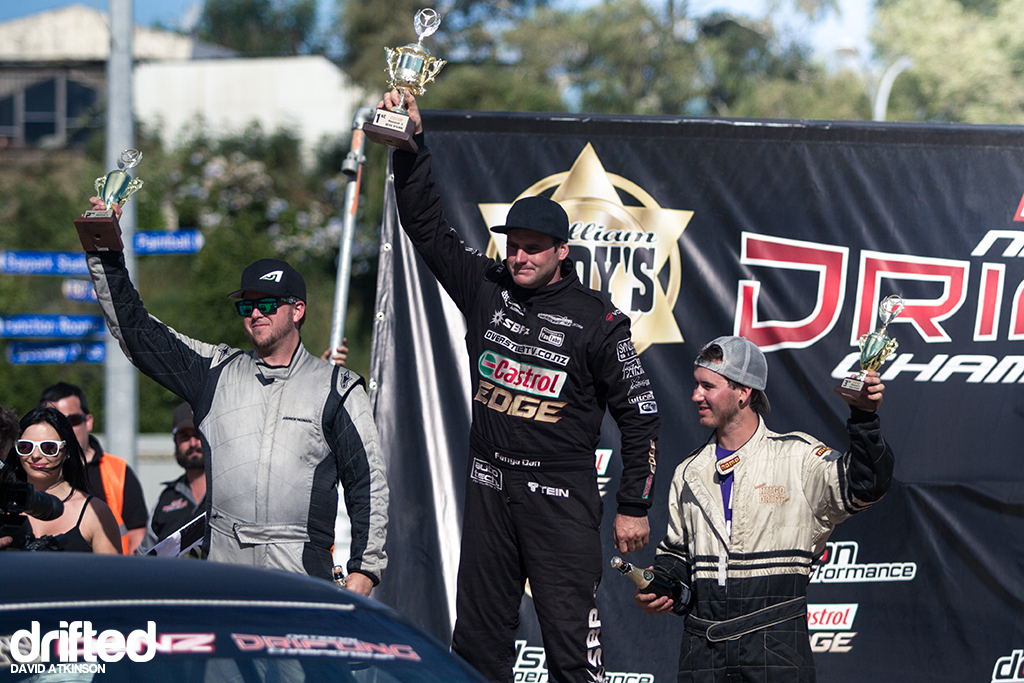 This round of D1NZ will definitely go down as one of the best in recent years. With a crowd so large they literally had to close the gates for the first time ever, and a superb track to throw down some awesome drifting – it was an epic weekend and I’m sure D1 will return to Tauranga next season! Here is the championship points table after this round: