The guys and girls behind the Maxxis British Drift Championship have just released the dates and venues for the 2012 season. Some familiar venues are included along with the welcome return of others, namely the fantastic Lydden Hill in Kent. Official release below….

We can now officially announce details of the Maxxis British Drift Championship 2012. The championship moves into its fifth year and is the UK’s premier professional series. Entries to the championship are at record levels with drivers from across Europe registering their intention to take part. France, Sweden, Holland, Italy, Belgium, Portugal and Ireland to name a few!
We continue to promote the sport in a positive light with media partners across every possible medium, from online blogs, magazine features in Fast Car, Banzai Magazine, Japanese Performance Magazine, the Total Group and many more. Viral videos, which have been viewed over a MILLION times!
We start 2012 with a stand at the Autosport Show at NEC Birmingham January 12th - 15th. The show brings together the motor sport community. From the short ovals, touring cars, sports cars, all the way up to formula one.

“We are taking drifting to a whole new audience which is a positive step forward for the BDC and drifting here in the UK” Paul McCallum - BDC director.

Each event in 2012 will take place over a minimum of 2 days. This will allow for practice and qualifying on day one. Day two will be used for the all important finals.

We will be running 3 separate classes as in 2011, Semi Professional, Professional and Super Professional. These classes are used to ensure drivers of similar standard compete on an equal level.

For the first time in the championships history we will run a minimum of a top 16 final in every class. 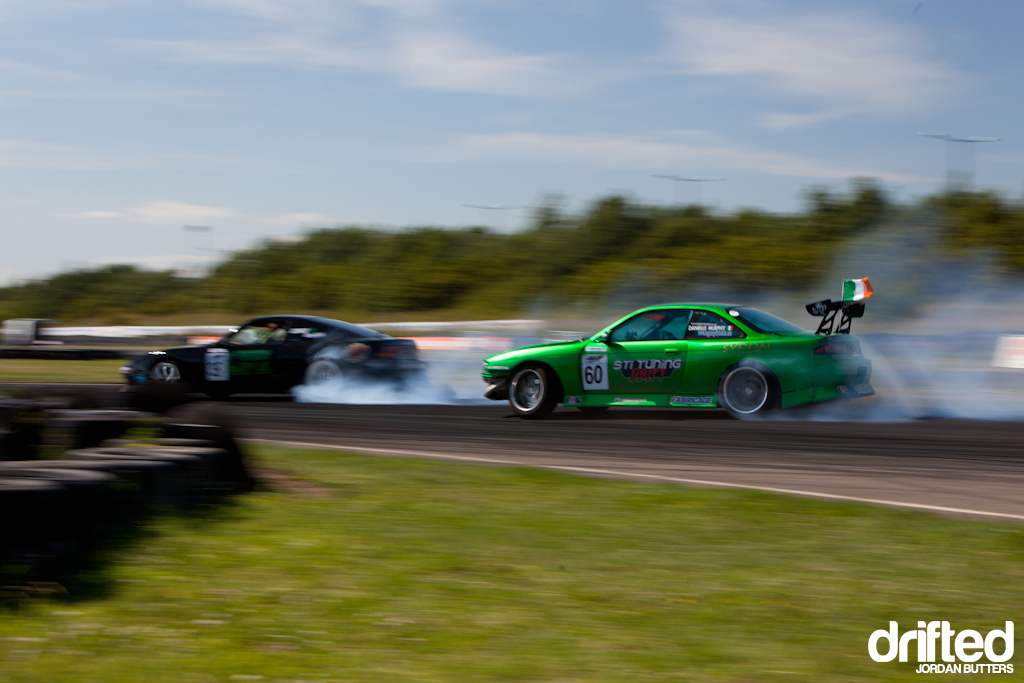 Following the return of drifting to Teesside in 2011, we return to the starting point of the BDC back in 2008. This venue offers the perfect mix of fast flowing corners mixed with tight technical sections to test drivers to the max.

We return to the venue which gives us the closest driving from at any event on the calender. With the finals run under the floodlights this is spectacle not to be missed. In addition the venue will host our annual team event. Teams of three drivers running together inches apart gets the crowds begging for more!

We return to Teeside for the second time due to the fantastic benefits the venue offers. However the track layout will be altered to offer a totally different challenge to the drivers.

We head to the far south east of the UK and return to undulating track of Lydden Hill. The dips and falls of this track means the drivers must find the perfect mix of balance and bravery to conquer The Hill.

The home of British Motorsport will be the host for round 5 for the Super Professional class. This will be the main attraction of the UK’s largest car show Trax. Entry speed of 100 mph are the norm and backwards entries will get the 15,000 strong crowd wanting more!

We head north of the border into Scotland for judgement day. We have saved the drivers favourite track until last. The first corner is not only fast but the apex is blind! Bravery, skill and perfect judgement are all required to get it right! Then its time to slow the cars down for the tricky right hander which has seen many visit the gravel that awaits.

The BDC will also be doing a number of demonstration events through out the year.

The first will be at Japfest at Castle Combe, for the first time we will be putting on a demonstration never seen at the event before. We then head to Japfest 2 at Donnington Park on the 8th July. We will be the main attraction at this event which is getting bigger every year! This will be YOUR chance to experience the thrill of drifting with passenger rides all day long.

“We have drivers from across Europe registering to take part in the championship in 2012, this shows  the whole BDC team will keep pushing the sport forward in the right direction.” Mark Buckle - BDC director.

The BDC team would like to wish you all a merry Christmas and a sideways new year.

Furthermore if you fancy yourself as the next British Drift Champion then the BDC are hosting their first 2012 licensing event on Saturday 3rd March at Silverstone Circuit, Northampton. For further details click here.