In this guide, you’ll find our ever-updated list of cars that feature in Need For Speed: Payback, including all additional content in the game. 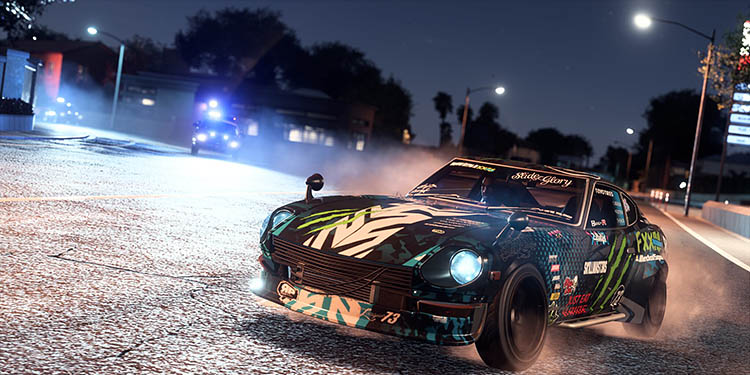 Ah, Need For Speed. Those of you who are *ahem* a little older like us will shamefully remember the original game, which hit the market in 1994 for the ‘3DO’ console.

However, it wasn’t until ‘The Need For Speed: Special Edition’ arrived on the PlayStation, Sega Saturn, and Windows platforms in 1996 that EA would take the opportunity to revolutionize the racing game industry as we knew it.

With the original game featuring just eight cars, that most probably wouldn’t go down too well with modern-day gamers. However, at the time, GamePro commented that the selection of eight cars “will leave car buffs drooling”.

Oh, how times have changed! Thankfully, for the twenty-third installment of the series, ‘Need for Speed: Payback’ sees significant growth.

Although ‘Need For Speed: Payback’ doesn’t feature the most extensive car list on the market, racers are treated to more than 70 cars over the original game, which was great news for fans of the series.

Then you’ve also got Gran Turismo Sport with 334 and Project CARS 2 with 205 vehicles to consider.

However, Need For Speed has its own entirely different appeal, and fans that know and love the series will hopefully be grateful to see the series’ most comprehensive car list yet.

We’re not talking about setting the quickest lap time at the track – NFS is more focused on causing absolute carnage before escaping the cops in the process.

For NFS: Payback, we head to the open-world environment of Fortune Valley, a fictional version of Las Vegas, Nevada.

Fortune Valley provides a wide range of terrains and regions, including mountains, a desert, a built-up urban area, and just about every scenario imaginable, which is fantastic for making the most of the vast array of vehicles on offer.

Thankfully, they’ve provided the perfect line-up of vehicles to make the most of the varied terrain too. From supercars to JDM’s finest, and even some off-roaders and muscle cars added into the mix, there’s something for everyone in Payback.

In-game vehicles have been modeled using CAD data from the manufacturers before being tweaked by developers for perfect precision.

The in-game sounds are also from real-world, street-driven cars scattered with microphones for ultimate accuracy, providing the ultimate eargasm experience.

As we’ve come to expect from the NFS series, it’ll come as no surprise that there’s also a wide range of tuning upgrades available, whether you’re looking for aftermarket body kits, ‘that’ NFS under glow, performance upgrades, or aftermarket wheels.

JDM fans are likely to be disappointed to hear that Toyota no longer features in the series. It was the same story for Toyota and Lexus in Forza Horizon 4, and although they later returned to FH4, Forza Motorsport 7 was left dry.

If it’s any consolation – Toyota GT86 fans will thankfully be able to select its twin-brother, the Subaru BRZ, instead.

Alongside Toyota, supercar fans are likely to be disappointed to hear that Ferrari is also missing from the list.

Although the Italian manufacturer has featured since the initial game, since NFS is more tuner-oriented, we weren’t too phased by its disappearance.

When you initially begin playing NFS: Payback, you’ll have the choice of four cars, which hopefully provides a little something for everyone.

Alongside the initial cars to purchase in the game, there are also various derelict cars you’ll soon discover across Fortune Valley waiting to be restored to their former glory, which we’ll look at later in this guide.

Each of the vehicles you purchase in Need For Speed: Payback will fall under the five different vehicle types, broken down into the following:

We’d always recommend keeping a race car in your garage for obvious reasons. Sure, we love drifting, but there are times where getting to the finish line first is essential.

When you’re hitting the mountains or the beaches, that supercar certainly isn’t going to be the ideal weapon of choice. Get yourself a well-equipped off-roader to power your way to victory on the tricky terrain.

Do we even need to tell you to get a drift car? Not only is this going to be the most enjoyable vehicle in your garage, but it’ll be perfect for navigating the tight and twisty mountain roads.

For the wheelie-poppers out there who enjoy straight-line racing, there’s plenty to choose from when it comes to purpose-built drag racers.

Now, let’s take a look at which vehicles in the game will be the ultimate choice to have stashed away in the garage.

Those of you who are keen to maximize the potential cars available in the game will most likely consider purchasing the additional content.

Gamers who purchase the “Ultimate Bundle” will have all of the DLC cars available right away, but if you opted for the standard version of the game, these would need to be purchased separately.

Thankfully, both the game and the DLC content are now cheaper than ever, which will undoubtedly make it a no-brainer for most gaming enthusiasts.

The ‘Platinum Car Pack’ was announced on June 2 alongside the reveal trailer for the game to tempt potential buyers into getting the ‘Deluxe Edition’ of the game.

When purchasing the ‘High Roller’ pack, you receive the following content:

As well as the cars in the pack, you’ll also receive the exclusive Speedcross Story content.

Those who purchase the Exclusive Deluxe Edition content will receive the following:

Speedcross Story was the final DLC pack, which arrived on December 15, 2017.

Although this was available with the ‘High Roller Pack’ and ‘Deluxe Edition’, it can also be purchased as a separate bundle.

On June 19, 2018, the ‘June Update’ was released, which featured ten new abandoned/derelict cars for players to find in the game.

On top of that, there are three additional DLC stand-alone purchase cars, which didn’t feature individually in any packs but were available to ‘Deluxe Edition’ purchasers.

For those that aren’t too bothered about the additional content or story modes in the bundles, and are just looking to purchase the extra cars, then there’s the perfect bundle for your needs.

There’s a total of 7 additional DLC cars available in NFS: Payback (excluding the Platinum pack), and purchasing the ‘All DLC Cars Bundle’ will make them immediately available for your driving pleasures.

Those looking to master the game may be interested in this additional DLC content pack that EA released on February 13, 2018.

With the ‘Fortune Valley Map Shortcuts’ pack, you’ll have the locations of everything you could want to find in the game revealed.

If you’re looking for any of the following, then this ‘cheat’ pack may be the perfect answer to your needs:

As you may have noticed in our initial car list, several of the most sought-after cars in the game have ‘Derelict/Abandoned’ next to them, and as you progress through the game, you’re likely to find them hidden across the map.

But, let’s face it, the chances are you’re going to want to get behind the wheel as soon as possible rather than spending hours searching in frustration!

The in-game derelicts are a similar concept to the Forza Horizon 4 Barn Finds.

On July 12, 2018, NFS announced that several derelict/abandoned cars are now available to buy within the car dealers rather than tracking them down, much to many fans’ delight.

The dealership is now filled with abandoned cars! If you missed out on collecting any of them, you can now go get yourself a Mazda RX-7 Spirit R, Volvo Amazon P130, Volvo 242DL, BMW M3 Evolution II E30, Plymouth Barracuda, or Nissan Skyline 2000 GT-R!
??: YtMessy pic.twitter.com/Fw4kOPlqt9

With the update, this meant that you were now able to get your hands on the following cars right way, provided you have enough cash in the bank:

After completing specific missions within the game and beating various bosses, you’ll eventually begin unlocking the remaining abandoned/derelict vehicles, and the game will provide you with a rough location of where to find them.

Thankfully, rather than spending hours driving around in circles, this walkthrough video from HarryNinetyFour provides you with the location of every derelict car in the game right away.

If you’re looking to enjoy the game on the PC platform, you’ll want to ensure that your gaming PC at least meets the minimum requirements to run smoothly.

Ideally, to avoid frustration, we recommend shooting for the recommended specs, or better, for the ultimate gaming experience.

If you feel that your gaming rig needs an upgrade, make sure you head over to our Best GPU For Racing Games guide.

Admittedly, Need For Speed: Payback doesn’t have the most impressively-long car list of all the racing games on the market, but they’ve opted for quality-over-quantity, providing a fantastic selection to meet everyone’s needs.

There’s plenty of choice in the standard game, but if you’re looking for some additional cars to add to the experience, the DLC content provides an ideal solution at a great price.

As well as the game’s DLC content, which can provide additional cars right away, some time spent carrying out the missions in the game will soon unlock a wide selection of abandoned/derelict cars, and we’ve explained above how to get your hands on those.

Need For Speed: Payback will undoubtedly provide long-lasting enjoyment, but if you’re keen to explore what the sim racing world has to offer, there’s a great selection of games out there to consider.

However, if you’re looking for something similar to NFS: Payback, then the likes of Forza Horizon 4 or GTA V are likely to provide the perfect solution.

So, there we have it! We hope that we’ve covered everything you could want to know about the cars in Need For Speed: Payback in this guide.

Thank you for reading our Need For Speed: Payback Car List guide.

If you enjoyed this article, please share it with the buttons at the bottom of your screen. If you’ve found this information useful, then please take a moment to share it with other Need for Speed and racing game enthusiasts. We appreciate your support.